I arrived to find Stephanie Danler already at Buvette, the intimate French restaurant in the West Village and the very place where this former server had launched her literary career. Or so the story goes, according to the voluminous profiles written about the author of Sweetbitter, a lyrical, coming-of-age novel set in the world of a high-end Manhattan restaurant.

Danler, in a blue dress, invited me to sit at a table on the back deck. “I love this place,” she said, smiling. “It makes me so happy.”

Her dress accentuated her haunting eyes, aqua, rimmed by a deep-ocean blue. She has straight blonde hair and the complexion of her round face and sharp chin is straight out of a Cover Girl ad. Despite her fresh appearance, she claimed fatigue and needed “a coffee thing,” having flown in that morning from Kenyon College in rural Ohio, from which she graduated in 2006 with a degree in creative writing.

“Book tours are exhausting,” I said. “Are you sick of it yet?”

“No,” she replied. “I’m so aware of what a privilege this life is, so I say yes to everything.”

Privileged—and lucky, it would seem. As The New York Times reported, in October 2014 Danler had been serving one of Buvette’s regulars, Peter Gethers, an editor at Knopf, one of the premier literary publishers in the country. Danler was aware that he was an editor, but had offered nothing about her own ambitions until Gethers said, “I hear you’re a writer.”

She told him she indeed was and that she’d just finished a novel. “Send it to me,” Gethers responded. She did.

Later, Gethers told The Times: “The book came in and within 10 pages, I was going, ‘Oh, my God, this woman is an extraordinary talent.’” Soon, the struggling waitress had a two-book deal reported to be in the high six-figures with the publisher of such authors as Margaret Atwood, Cormac McCarthy, Colson Whitehead and Toni Morrison.

“It would have happened anyway,” she said, when she recounted the events. “I mean, I’m aware of the importance of the story…” She trailed off, disinterested, and placed her order for steak tartare. 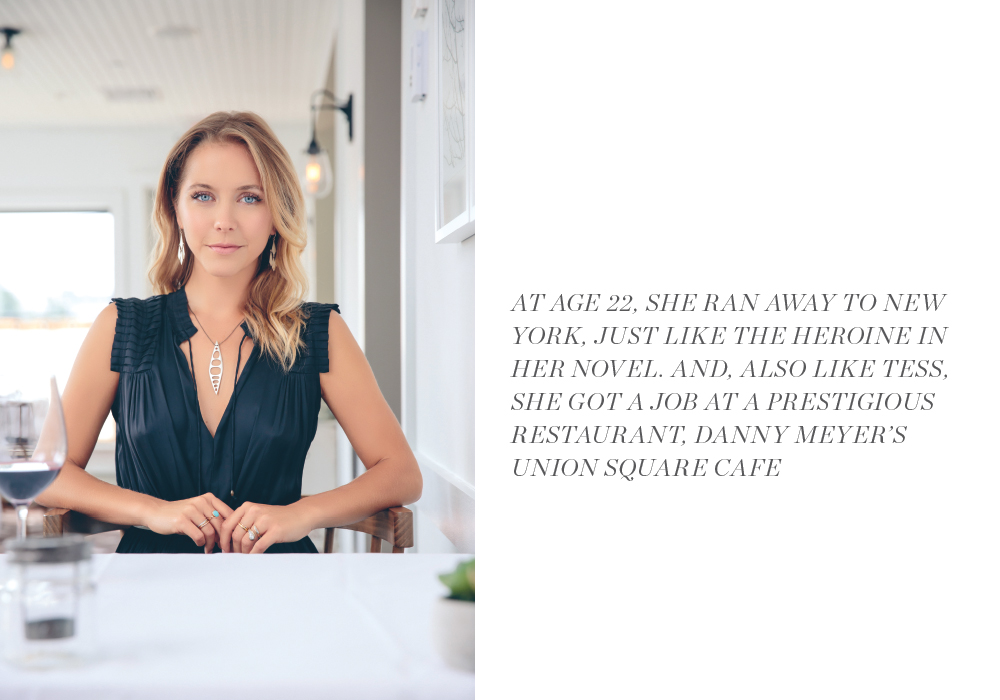 It’s a story? I thought. As in, not the “real” story? It is, of course, the story so old as to be clichéd: neophyte moves to New York City to become a writer. And that is exactly what she did. But how, every similar-striving young writer wants to know?

Danler grew up in the town of Seal Beach, CA, midway between Long Beach and Newport Beach (south of Los Angeles). She was a reader and writer from the beginning. In second grade she found Edgar Allan Poe and, adoring his macabre stories, wrote her own—illustrated tales of murdered little girls. The stories so disturbed the nuns of her Catholic school that she and her mother were called before Sister Mary to address the small matter of a girl with an imagination and her inclination to tell stories.

“I read things way too young. I read Lolita at age 15. I thought it was a love story.” She read a real love story, Justine by Lawrence Durrell. She read the poetry of Rimbaud and Baudelaire. She had already, at age 10 and in the fourth grade, read The Catcher In the Rye. She too had longed to run away, and so, following Salinger’s model, wrote her first real story (real, she explained, “I suppose because I didn’t illustrate it”), about a young girl who runs away and lives underneath the pier, subsisting on candy.

Home life was troubled with a single, alcoholic mother and absent drug-addicted father. She longed for freedom, which you could only achieve if you could pay for it. So at 15, she got her first job, as a hostess at Walt’s Wharf seafood restaurant. “One night a guy handed me $20 and asked me to move him to the top of the waitlist. So I did it. And I thought, ‘This is a great job!’” She would remain in the restaurant business for the next 16 years. To be surrounded by older, more sophisticated servers and fun-loving cooks in a crowded and busy restaurant was a heady experience that caught and stuck.

At age 22, she ran away to New York, just like the heroine in her novel. And, also like Tess, she got a job at a prestigious restaurant, Danny Meyer’s Union Square Cafe, where she was a back waiter, a front-of-the-house/back-of-the-house go-between. “I was lucky to start as a back waiter at Union Square Cafe because I had access to both worlds. That’s why I kept Tess a back waiter. If it had been a server book it would have been so much more about the guests.” Instead, the book became an intimate description of all the restaurant details most diners never see. The angry, demanding chef, the gravitas of a Manhattan landmark, the difficult or quirky regular patrons. The book gets all the nuances of restaurant life exactly right, from the maniacal attention to bar mops, to the after hours drinking and drugging by younger staff and yes, of course, the fucking in the coatroom.

All of this is a backdrop for Tess’s education in New York City in both love and wine—her affair with a rogue bartender and the strange love-triangle that develops between these two and a senior server. Dwight Garner, reviewing the book in The New York Times, called the novel “an unpretentious, truth-dealing, summer-weight novel…that reads like a letter home from a self-deprecating friend.”

“We are a culture that’s obsessed with food,” Danler said. “More television shows, more memoirs coming out. A memoir from the cheesemonger, a memoir from the butcher, a memoir from the somm.” Danler then made an important distinction in our food-lit evolution. When Anthony Bourdain’s Kitchen Confidential struck, no one really knew what was going on back there in the walk-in, or behind the restaurant where the chef was giving a young bride her honeymoon sendoff over a trashcan. 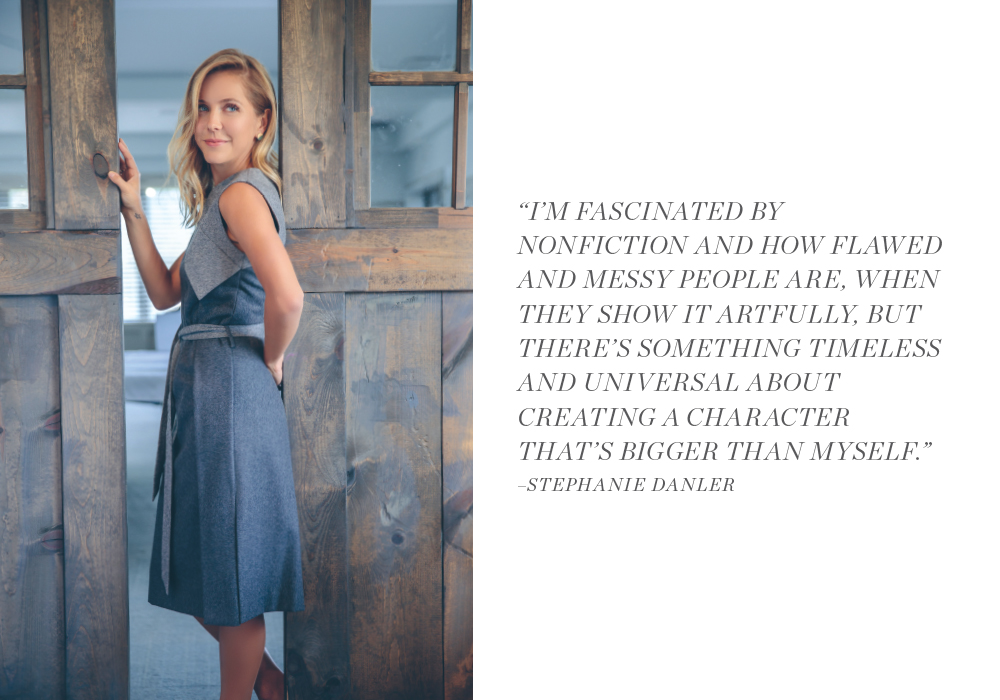 Bourdain, she said, was talking about the secret world of the chef. “No one’s telling secrets,” Danler stated, noting there aren’t any to reveal anymore. “They’re telling stories. I was encouraged to write Sweetbitter as a memoir by many people, by teachers and by agents,” she recalled, “and I was never interested. I’m fascinated by nonfiction and how flawed and messy people are, when they show it artfully, but there’s something timeless and universal about creating a character that’s bigger than myself…composites about all the restaurants I worked at and hoped that I could say something true about restaurants. Something bigger than just Union Square Cafe and the idiotic things I did when I was 22. And fiction gives you that freedom.”

Danler fell in love with her boss at Union Square and, after leaving the restaurant after a little more than a year, eventually married him. She’d been lured away (“poached”) from Union Square Cafe by one of its regulars, Mani Dawes. The duo wanted to open a wine store, one of Danler’s goals. But she had seen Dawes and her restaurateur husband bear two children and the concomitant stresses of work and family. Her own marriage was unraveling. She looked ahead and saw that if she were to open the wine store “10 or 20 years could slip by.” Fearing the store would be the culmination of her career—a career that would thus not include writing a book—she reconsidered. In the end, she was struck by the Rilke poem “Archaic Torso of Apollo,” a description of a statue that ends with an unexpected and bold command: “Change your life.”

She’d come to New York to become a writer. If she didn’t do it now, she knew she might never. “It was a demand that felt like life or death.”

She quit her job and enrolled in a MFA writing program at The New School. For her first assignment from her teacher, the novelist Helen Schulman, she’d patched together material she’d slowly been working on over the years about a restaurant, 30 pages. She told Schulman it was a novel. Schulman said it was not. Which was true, but Danler saw the possibilities and carried on.

She landed a server job at Buvette (lying about her general manager experience for fear she’d be rejected as overqualified), worked as an assistant for Schulman, and fulfilled her master’s requirements. Her thesis advisor was the writer Jonathan Dee, who helped her shape and write and rewrite. She was singular in her devotion to work.

After two years of working two jobs, fulfilling her master’s requirements and writing, she had a novel. The novel found an agent at Trident Media. Together she and the agent put together a list of editors to approach. When they were about to send it out, Gethers wandered into Buvette, struck up the conversation and asked to see it as well.

In all, Danler had more than 10 meetings with editors at top houses. Gethers and Knopf were by far the best choice for first fiction. Thus the legend of the server in a tiny West Village restaurant handing her manuscript to a big editor who happened to be dining there began.

But really, it was work. The daily work of two years, and before that, years of reading and writing and watching, and showing up for work. The latter of these may be about the only skill truly required for success in restaurants. It’s a skill Danler has transferred to her new career. “I show up,” she told me. “That’s the edge I have over writers who weren’t in restaurants half their life.” That, of course, not luck, not chance meetings, is how you get where you’re going. You show up.