Northern Italian native Massimo Fedozzi always had a knack for translating languages but one thing was missing: passion. After he began working at his parents’ salumi shops in Genova, he discovered a piece of himself that had been lost in the shuffle.

“I don’t really have heroes in my life but my parents,” said owner and chef Massimo Fedozzi. “Seeing how much devotion they had in the business—my dad’s passion for food and willingness to make everyone happy and make their day is something that really sparked my creativity.”

Following his true calling, he attended the Marco Polo Culinary Institute in Genova where he got his master’s degree in culinary. He came to the United States in 1984 and began working at I Tre Merli in New York City as the executive chef. From there he headed many kitchens along the East Coast but decided to branch out on his own and plant seeds in Massapequa Park.

“There was a void in the area for a neighborhood family restaurant,” said Fedozzi who opened the eatery in September with partner Bob Saba. “Everyone is used to the same Italian/American cuisine. At Tra’mici I want to show my guests what Italian is through authentic plates with an inventive twist.” 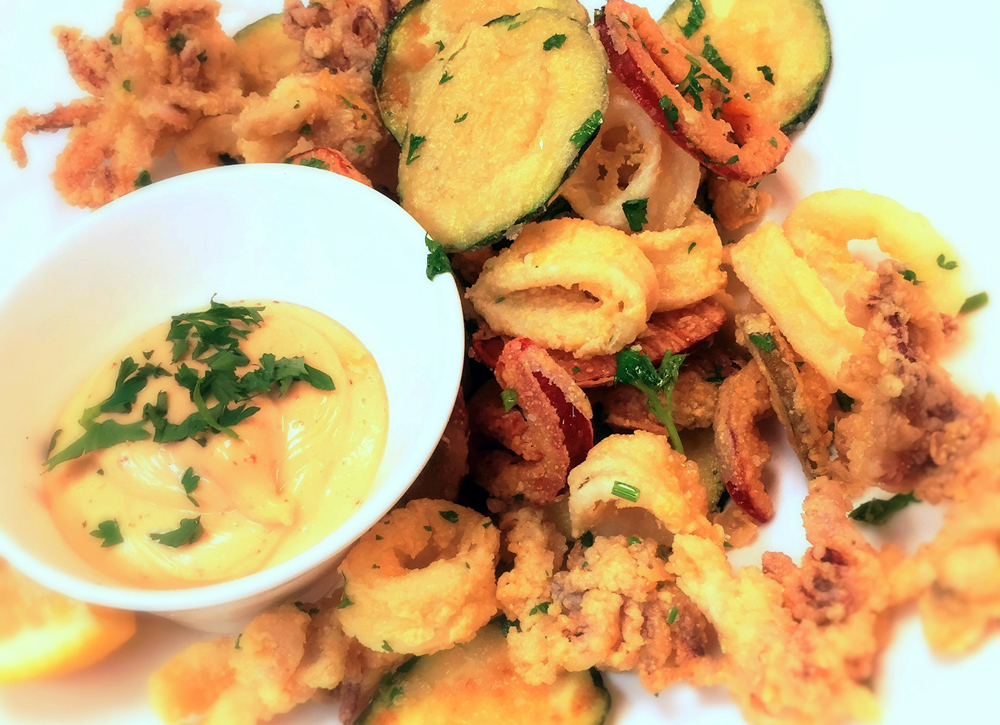 Each serving at this casual bistro “looks at the future without forgetting the past.” For starters, Fedozzi recommended the raved-about fried calamari, which tastefully challenge the status quo. At Tra’mici, the appetizer is lightly dusted with cornmeal and presented with zucchini chips, cherry peppers and a chipotle aioli sauce. Fedozzi also has a few tricks up his sleeve with the arancini cacio e pepe (rice balls), which are served with an Alfredo sauce consisting of whipped butter, Pecorino Romano cheese and black pepper as opposed to marinara sauce.

“It’s about taking signature Italian dishes to the next level with an unexpected flavor that wows everyone’s taste buds.”

And it’s not just palates that are being treated. There are chairs upholstered with orange coverings, napkins with orange strips, dim orange lights at the bar and a menu presented on an orange clipboard that serve as feasts for the eyes.

“It’s my goal to make everyone happy and treat them with respect, like my father did. And (like the name) consider everyone friends.”