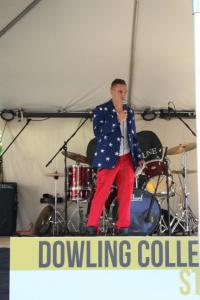 After serving on active duty with the U.S. Army’s 101st Airborne, Patrick Donohue struggled to reintegrate into society. He enlisted in 2008, was deployed to Afghanistan’s Kandahar province and helped fight against the Taliban. During his time in combat, he saw death and destruction. Though he survived, when he returned home to Long Island in 2012, his world went dark.

“Going back to being a civilian again is a difficult process,” Donohue said. “There were a lot of services in place to get acclimated but there were also a lot of things that didn’t exist when I was transitioning.“

Mental help services and schooling programs were available, but workshops based on involvement in the arts and other activities were few and far between.

Donahue’s struggles and recovery inspired him to found Project9Line, a largely volunteer-run non-profit dedicated to helping veterans reintegrate and communicate through free programs and workshops that focus on art, entrepreneurship and communication.

“We try to offer a lot of different ways to get involved and ultimately to communicate somehow, whether it be through art or activity, and to build some bonds with the community and with each other. It really has a domino effect.”

The Islip-based organization has helped an estimated 3,000 Long Island veterans and works with an average of 50 veterans each week at the programs and workshops. The hope is to help veterans deal with post-traumatic stress syndrome and curb the startling veteran suicide rate. New data from the Department of Veterans Affairs shows that roughly 20 US veterans commit suicide each day. As a veteran himself, that’s not just a statistic — it’s personal.

“Bridging the gap between the community and the veteran coming home and then raising awareness about…ways veterans can get involved are things that need to be focused on. My own experience was and still is, in some capacity, the basis for what we do and why we do it.”

Donahue gets on stage during standup comedy nights and encourages other veterans to do the same. There’s also meditation, ceramics, martial arts and the ever-popular guitar lessons, which recently connected a different kind of band of brothers.

“From [the guitar lessons] a band has formed with mostly Vietnam era guys,” Donohue said. “Some of them had never played together before.”

But this year, the band Project 9Line All Stars got a taste of the local spotlight when they performed at the Freedom Fest Taste of Long Island Festival and Street Fair, which took place in conjunction with the Suffolk County Marathon Suffolk County Marathon, Half Marathon and 5K Oct. 30. It’s stories like those that are most meaningful to Donohue.

“Countless veterans and family members have been impacted by what Project9Line has done. It’s really amazing,” Donohue said.

Soon, Donohue will have a bigger space to work with. On Nov. 10, Home Depot and dozens of volunteers will begin renovations on a new building in Islip, Donohue shared. It will serve as a modern veterans activity center just for Project9Line, allowing them to continue their current workshops and possibly expand to include more in the near future.

“It’s all about what we do, and now we have a home to do it at,” Donohue said.