Contractor Spiro Kitovas has constructed everything from bridges to The Metropolitan Detention Center in Brooklyn, the Fire Alarm System at Queens College and The Police Academy in College Point, but that hasn’t been enough to cure his cravings for creativity. In search of a sweeter life, Kitovas opened The Pie Shoppe, a scratch bakery in Hicksville, in September.

Kitovas said his pies have a “homey connotation to them.” Keeping home in mind, he used his knack for designing to create the 4,000-square-foot facility with dark wooden finishes, a redwood colored brick wall and a forest green scalloped canopy over windows that showcase pies, avant-garde layered cakes and a nifty cappuccino contraption.

The Pie Shoppe’s menu is just as inviting. Everything is made on premise, including the jams and marshmallows. There are sweet pies like pumpkin, sweet potato, key lime and fruit-filled pies that are baked and served in a paper bag to keep the natural juices from evaporating. Get there early for the savory breakfast egg pies, made with bacon or sausage, cheese and housed in the customer’s choice of hash browns or Panko breadcrumbs, which are served promptly until 11:30am. Hearty potpies options are also available with fillings like spinach (his mother’s recipe for the traditional Greek spanakopita), braised short ribs, turkey and bourbon chicken.

There’s a made-to-order cake section in an allotted space in the far corner, away from the pies and coffee bar that has its own audience. The staff will put a tray full of bits and pieces from The Pie Shoppe’s mainstay cookies on the counter from time to time so guests can take a taste. 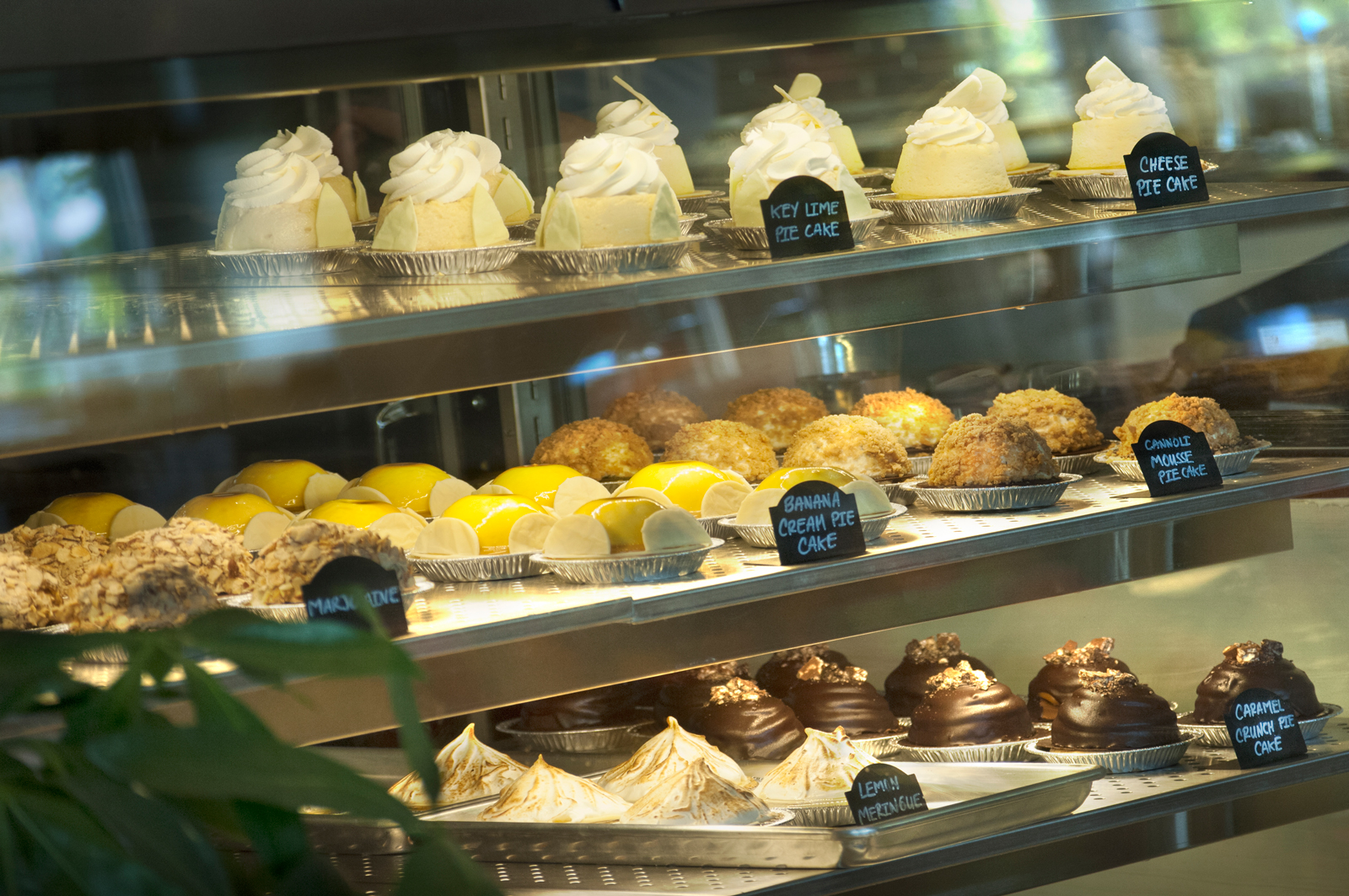 Like the guests, Kitovas loves to taste but the businessman, contractor and visionary doesn’t cook. “I couldn’t fry an egg to be honest with you,” he confessed. “But I have dabbled in pastry and I do know the process and what we have to do to make every single item we sell.” That’s how he knew to weed out prospective pastry consultants and team up with award-winning pastry chef, Robert Ellinger.

Ellinger was the head chef at Port Washington’s heralded Baked to Perfection, which closed down earlier this year. Kitovas attended an auction Ellinger hosted in hopes of purchasing commercial baking kitchen essentials. They got to talking and Ellinger agreed to help develop pie recipes, even funneling a few of his disciples along to Kitovas, including the cake decorator who doubles as head baker.

Kitovas plans to incorporate more of his Greek heritage into The Pie Shoppe’s future plans, one of which is The Custard Pie—a hand pie that is best served hot, is surrounded by phyllo dough covered in powdered sugar and cinnamon. Kitovas asserts that this is “the best breakfast, if you like sugar,” and will be one of “several products that we’re going to introduce over the next several months.”

He’s finalizing the liquor license and will soon introduce Irish coffee, an espresso with a shot of Sambuca, and a self-proclaimed “excellent chai tea latte gin” that “you’ll fall in love with if you try it once and you’ll never stop drinking it.”