The average length of deployment in the US military is 7.7 months. Those deployed multiple times typically spend nearly 17 months overseas. During that time, soldiers see combat, participate in raids, lose limbs and watch their friends die.

When those soldiers return home, they undergo a mandatory reintegration program. They are screened for and trained on how to deal with emotional issues, such as post-traumatic stress disorder, which U.S. Department of Veteran Affairs estimates afflicts 31 percent of Vietnam veterans, 10 percent of Gulf War (Desert Storm) veterans, 11 percent of veterans of the war in Afghanistan and 20 percent of Iraqi war veterans.

Whether a soldier sees 7 months or 17 months the reintegration program still only lasts 7 days.

Dr. Michael Moore, an assistant professor in the Gordon F. Derner Institute of Advanced Psychological Studies at Adelphi University, who worked with veterans at the Baltimore VA, said, “[These guys are] 18 or something when they enter the military. The military puts a great deal of time and effort into converting them from civilians into soldiers…and just as much effort should be put into changing them back.”

But it’s not just the length of time, it’s the timing itself that some say makes the program ineffective.

South Shore resident Patrick Donohue couldn’t even grasp what he was feeling immediately after returning from Afghanistan, where he served from 2010-11. He also admitted he skipped out on a few of those reintegration sessions.

“That should have been a red flag,” he said. “[But] even if I was there…I wasn’t going to know what I was feeling for a while.”

And even those who are feeling something may not be willing to disclose it.

“You really don’t want to be there,” added Ron Hurtado of Farmingville, who enlisted at the age of 25. “You want to go home and spend time with your family. The more you tell them, the longer the program gets. So what do most people do? [They tell the counselors] ‘I’m fine, great.’ They’ll do anything to just go home. It’s set up for failure.”

This summer, the VA completed the largest study on veteran suicide in US history, examining death records of more than 55 million veterans from 1979-2014. Previous reports used data from 3 million death records from 20 states. The findings provided both the government and the public the first comprehensive look at the issue. 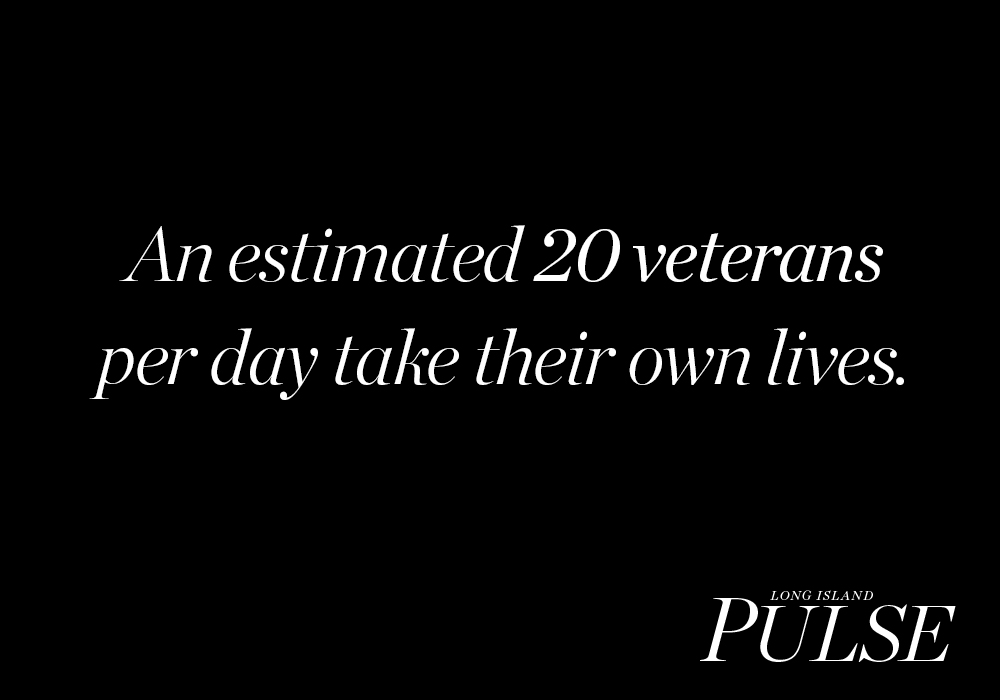 It was a grim one. The VA’s research showed the suicide rate among veterans has risen 35 percent since 2001 and that an estimated 20 veterans per day took their own lives.

Hurtado was nearly one of them.

Though he had not been woken up by gunshots since he returned from a 16-month tour in Afghanistan in 2008, sleeping through the night was still a battle when Hurtado moved to Long Island to serve as a recruiter in 2010.

“I used to have a lot of nightmares,” he recalled.

At first, he was scared to tell anyone. He had dreams of joining the military when he was a young child playing with GI Joes at home in Staten Island and worried that his confession would damage his career.

“I thought there was no better honor, nothing better in life than to be a soldier, serve your country and protect the people,” Hurtado said. “You don’t want to tell them you’re having this or that because they’ll kick you out of the military.”

Eventually, Huratado saw a doctor. He was prescribed Ambien. Though not as habit-forming as anti-anxiety medications such as Xanax, Ambien can worsen depression and increase suicidal tendencies. It also isn’t a cure-all for insomnia, as Huratado learned.

“I never felt rested,” he said. “It’s horrible not being able to sleep. Constantly dreaming, trying to get sleep whenever you can, your body is not right.”

One night in 2012, Hurtado downed Ambien and went to bed. The next thing he knew, he overheard his wife crying on the phone to the police. Then, he woke up in the hospital. It was there that he learned that he had written suicide notes.

Hurtado went to the VA for antidepressants and saw a psychiatrist. But he didn’t feel whole again until he started running and weightlifting.

“If I had a better way transitioning back, maybe that wouldn’t have happened,” he said.

In an effort to help others, Hurtado founded Airborne Tri Team in 2014. The organization sets up goals, such as running a marathon or weightlifting, and provides veterans with a roadmap to getting there.

“The whole intention is to make them feel like they still are a part of something. All of us have been deployed, have seen stuff. When we’re training we’re talking, decompressing, sharing stories.”

Patrick Donohue understands. Though he never attempted suicide, he remembers isolating himself after he returned from a three-year tour of active duty in Afghanistan. It took him two years, skipping his cousin’s funeral and the help of a fellow soldier to get into treatment.

Like Hurtado, Donohue got help and today said he feels healthier and happier. He also went on to found a non-profit, Project9Line, which hosts comedy nights, music lessons and meditation sessions for former soldiers. But for those 20 veterans who commit suicide each day, help either isn’t enough, comes too late or doesn’t come at all.

“People were dying all the time out there,” Donohue recalled of his time in active duty.

Soldiers who see time in combat tend to witness death, devastation and may have needed to take another’s life. The experience — the norm for a combat vet — is something most civilians can’t even fathom, making the transition home difficult.

“People are complaining at Walmart about cookies,” Donohue said. “Meanwhile, your friends are getting shot somewhere.”

Help is available. The VA offers free services but, like Hurtado and Donohue, people are often hesitant to sign up.

“It usually takes several years to get the services,” said Moore, adding that the hyper-masculine culture of the military gives rise to stigmatizing those who admit needing help. He also said that veterans can lose their security clearance by seeking treatment, which would prevent them from being able to work in law enforcement or as a defense contractor with the Department of Defense. Because the VA is connected to the agency, information about psychiatric history can be flagged during a medical background check, precluding them from certain types of employment.

The VA has struggled with other trust issues over the last two years, In 2014, CNN reported that at least 40 armed forces veterans died while waiting to receive care from the Veterans Health Administration in Phoenix, Arizona. Internal investigations confirmed 35 of those cases.

Though the target wait-time for an appointment for primary or specialty care is 14 days, retired Dr. Sam Foote, who spent 24 years with the hospital, charged that officials sent Washington a list of appointments that were timely and left off patients that had to wait more than a year. Similar issues were found at VHAs in Austin, Texas; Fort Collins, Colorado; Cheyenne, Wyoming and Columbia, South Carolina.

On Long Island, the Northport VA Medical Center upheld its reputation for decades but came under scrutiny when Peter A. Kasen of Islip, 76, shot himself in the facility’s parking lot in August. A pair of workers anonymously told the New York Times he was denied service from the ER and was not referred to a psychologist. The FBI is investigating and the Northport VAMC public affairs officer Joseph Sledge denied the report to this reporter.

Moore believes the bad press serves as another deterrent.

“They have to be worried about how they’re going to be perceived by friends and family, complete strangers and now they hear [going to the VA] might not even help because they might be on a waiting list for a long time,” he said.

Though the reports are discouraging, when it comes to PTSD, not getting help only compounds issues.

“People who experience psychological trauma and can think about it and talk about it are much better off,” Moore said. “People who develop PTSD, there are other risk factors [such as a family history of anxiety, drug or alcohol abuse and a pre-existing emotional disorder], but they want to pretend it never happened. It’s very difficult to get past something like that without working through it.”

For many older vets, especially those who endured backlash following the Vietnam War, this has led to lifetime battles with mental illness. The VA found that 65 percent of veterans who killed themselves were 50 years or older.

“These are guys who were spat at when they came home,” Moore said. “The VA wasn’t where it is now in terms of evidence-based care. For a lot of these guys, it’s been a long and complicated road. You just get to a point where enough is enough.”

The Northport VA does an outreach event targeted at this demographic each year. Yet Sledge said it’s not uncommon for people to only just begin to address issues with PTSD as they age.

“When they retired…they had more time to think about what they experienced in combat,” he said. 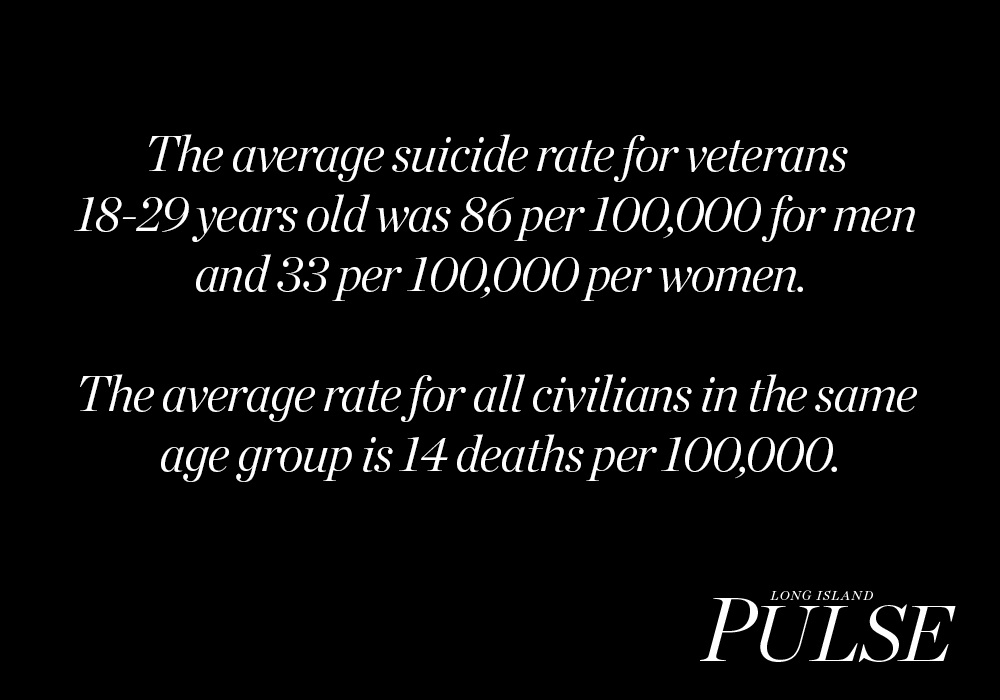 Moore said some of this is because soldiers are now surviving traumatic brain injuries that once killed people. And the physical damage can contribute to PTSD and depression.

“A lot of these injuries are caused by the brain smacking around inside the skull [during an explosion]. The frontal area is a common spot involved in emotional regulation.”

Although the suicide rate for women veterans is lower than that of their male counterparts, the VA said it rose 85 percent from 2000 to 2010. Women younger than 30 are about six times more likely to kill themselves than civilian women.

In a 2013 Pentagon survey of former servicemen and women, 12,100 out of 200,000 women reported experiencing unwanted sexual conduct. Researchers with the VA found that women with a history of military sexual trauma (MST) were twice as likely to commit suicide than female veterans without such experiences. Like males, combat exposure and PTSD likely also play a role. The VA cited female veterans’  increased knowledge of and access to firearms as a probable reason. Its study of suicide deaths from 2000-2010 found 40 percent of women veterans who committed suicide used a gun, a more lethal method than pills.

“These things can be very impulsive,” Moore said. “You hit a really bad point where you’re feeling really alone and sad and want to hurt yourself [and] you have the means right there in that moment.”

What Needs to Happen? 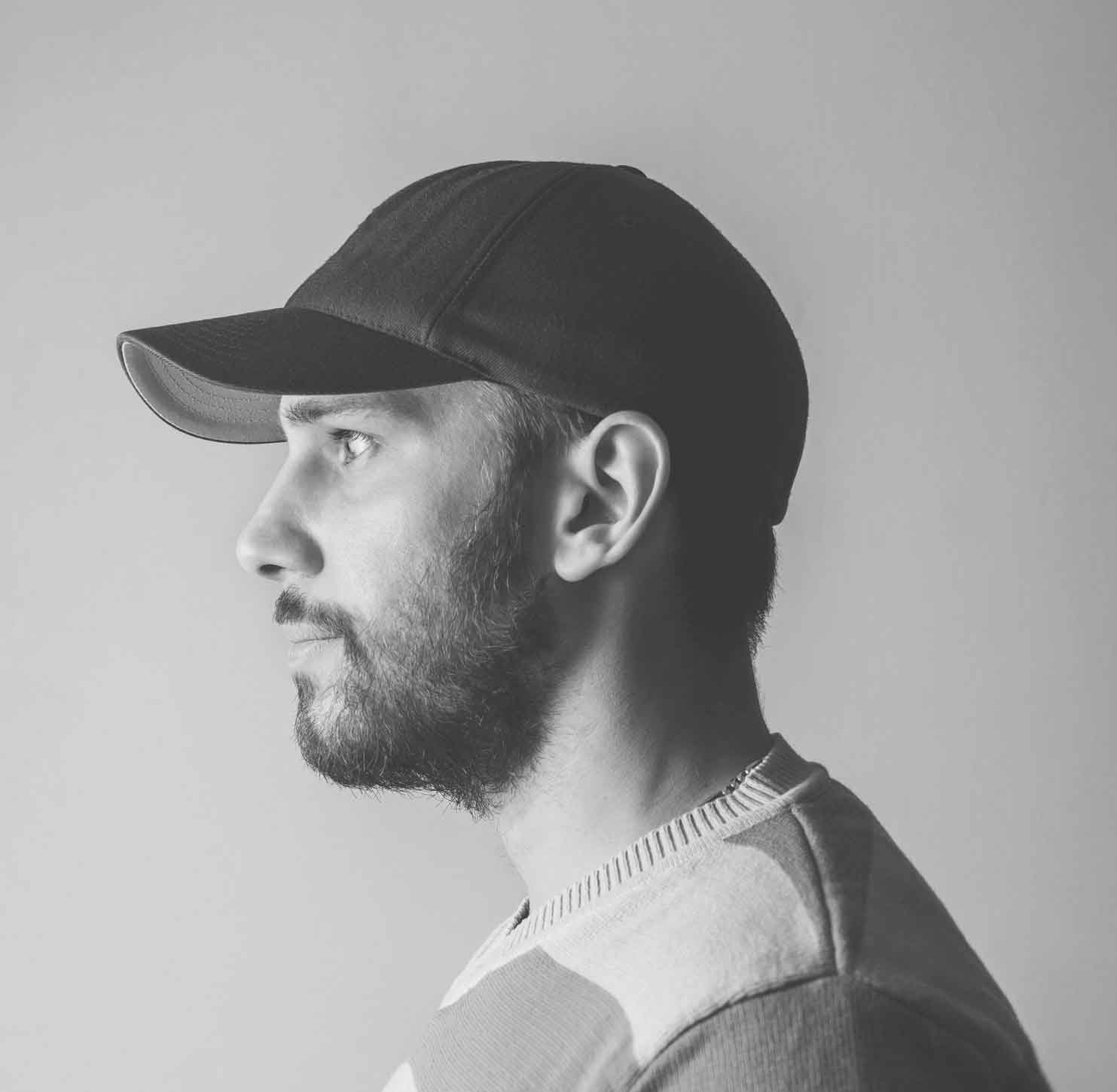 Of the 118,868 veterans living in Nassau and Suffolk County, Sledge said about 32,000 sought treatment at the Northport VA last year. The VA found that men who use its health services are 78 percent less likely to commit suicide than those who do not. The number is even more dramatic for women: 95 percent. Moore noted that, over the last decade, the department has put a premium on offering treatment proven by research to be effective.

Making it OK for veterans to take advantage of this help starts when they are still soldiers. Military social workers and psychiatrists travel with units overseas but soldiers often don’t want to be ridiculed or stigmatized.

“The military has a lot of programs but it goes back to your leadership (captains and officers). Leaders may say, ‘Oh this is the weak guy who is having nightmares.’ You shouldn’t be singling people out because of their issues,” said Hurtado. “A lot of people are embarrassed. It’s not because they’re weak. They just saw stuff no human being should have seen.”

“The culture has to change,” added Moore. “It takes time but changing military culture can only happen inside the military. No one can change it from the outside.”

Together Strong
An online resource that helps veterans find help and chat with peers.