THE CALMING FINNISH COUNTRYSIDE, where gently sloping green landscapes and wooded patches of white birch trees dotted by lakes and rivers, wildflowers and berries, offers a subtle lesson in the art of nature. Finns are often known for their capacity for silence, indeed their resistance to small talk and other inauthenticity. And it’s their closeness to their natural surroundings and the power of the seasons that provides insight into the source. The simplicity, clarity and vivid beauty of much of Finnish design finds its roots in the awe-inspiring vistas and all things tilt toward that.

Sanna Annukka spent her summers in a small village in the center of Finland, swimming and fishing in Lake Oulujärvi and exploring the forest. She was born in Britain to a Finnish mother and draws inspiration from those childhood memories in her work as a designer. “I adore folklore,” she said, “nature, wildlife, Finnish landscapes and the ethereal quality of light on a midwinter’s day in Lapland.” 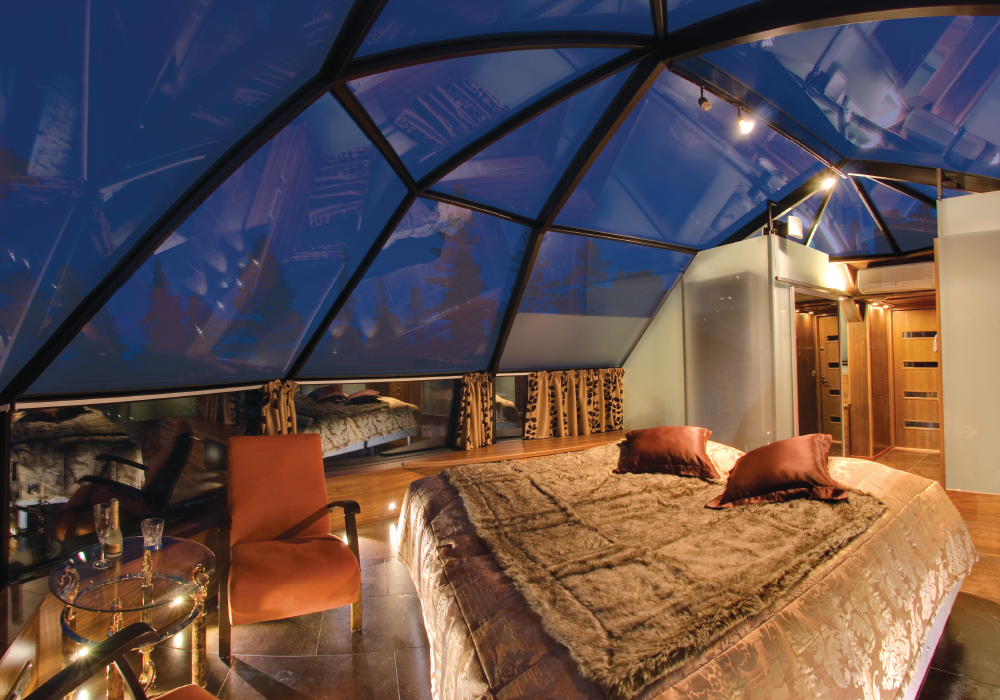 Peer up at the Northern Lights from Kakslauttanen Arctic Resort’s glass igloos.

Like many young designers, Annukka dreamed of joining the team at Marimekko, the iconic Finnish maker of textiles and fashion best known for its iconic, 1960s-era poppies pattern. When she was invited to create motifs for a Marimekko textile collection, she turned to her inspirations from Finnish nature and the naturalistic symbolism of its beloved folk epic, The Kalevala. It’s hard to overestimate the impact of the country’s nature and light on its artists and designers, Annukka among them. Nearly two-thirds of this Nordic country is covered with forest. It’s known as “the land of the thousand lakes” (and actually contains more than 180,000 inland lakes) and about one-third of the land mass is north of the Arctic Circle.

“Finns have always used the scarce resources and materials of nature and learned to use them purposefully and by concentrating on what’s essential,” noted Eero Miettinen, professor of design at Aalto University in Helsinki. “That tradition is still alive in our design and is easily recognizable—very solemn form and color palette. Finnish design also uses light colors, which is influenced by our long dark winter and light summer,” he added. 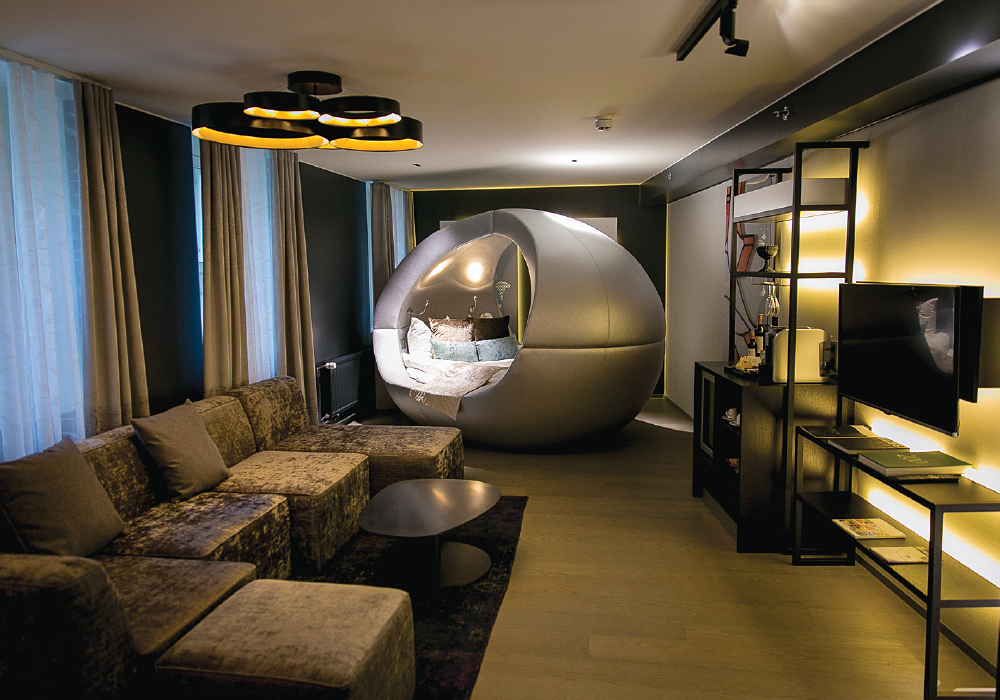 A version of Sky Suites at the Klaus K Hotel in Helsinki features an egg-shaped bed.

The Northern Lights, or Aurora Borealis, is perhaps the most iconic display of the region’s influence over artistic sensibilities. The exciting nighttime swirl of green and blue, red, purple and pink offers the most vivid expression of northern Finland’s natural drama. This interplay of fast-moving electrons with the oxygen and nitrogen in Earth’s upper atmosphere can be seen about every other night between September and March when the sky is clear.

This sight in Finnish Lapland—along with the chance to see snow-encrusted forest, ride behind teams of reindeer, sleep in a glass igloo, brave the cold and darkness, and relax in a natural smoke sauna—is one of the main reasons visitors head to a place like Saariselkä and Kakslauttanen Arctic Resort. It is the definitive winter fantasyland, ready to provide the array of cold weather diversions. Traditional activities like ice fishing and cross country skiing are part of the itinerary at Kakslauttanen. But, to take a page from the “only can do it here” book, husky safaris are available to pull guests along the open fields for a quick jaunt or an overnight adventure. Standing at the back of a sled being pulled by a team of huskies makes for a riveting connection to the rugged surrounds. It’s a chance to experience raw nature—no other sounds or smells will be a part of the scene.

Back in the capital all things are amplified, particularly the national pride in the visual tradition. Helsinki’s Kauppatori, or Market Square, is often the first stop for the just arrived. Set at the edge of the Baltic Sea, where cruise ships stop on their way to Sweden, Russia, the Baltic countries and other Scandinavian destinations, this busy cobblestone market bursts with color and sound as farmers and fishers sell their goods: strawberries, blueberries, mushrooms and beets in the summer; salmon and other fish throughout the year; hand-made souvenirs and makeshift cafes for keitto (soup), strong kahvi (coffee) and korvapuusti (cinnamon buns). 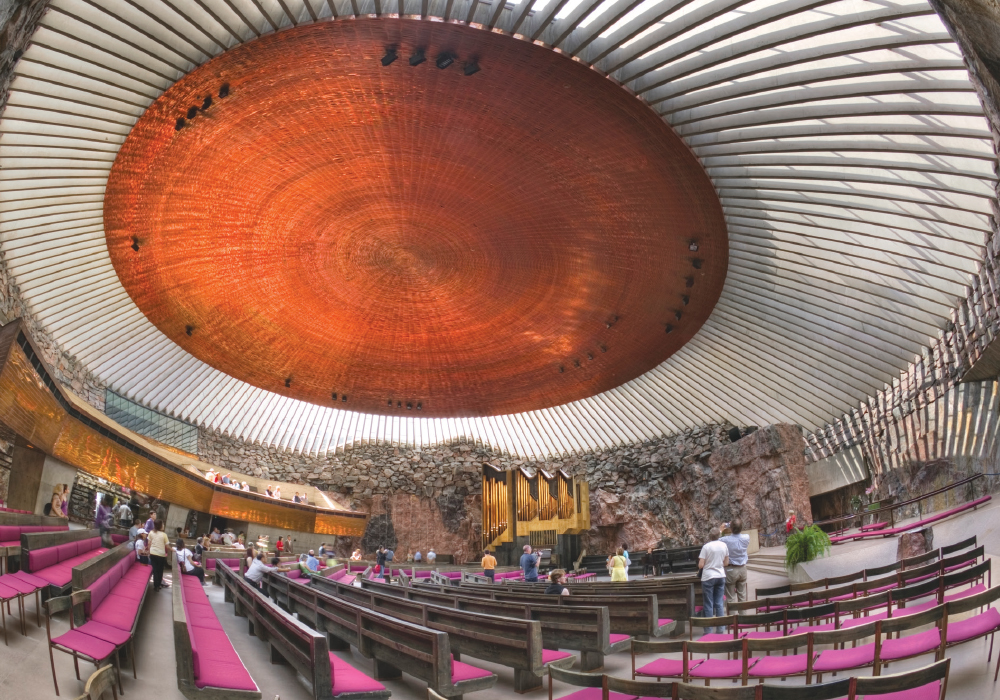 The interior and ceiling of Temppeliaukio Church in Helsinki are design masterpieces.

Some people may jump aboard the ferry boats at the market’s edge for a 10-minute ride and a picnic on Suomenlinna, a small fortress island and World Heritage site. But urban and design enthusiasts are more likely to head to Esplanadi, a lovely pedestrian path that cuts through the center of town. This takes you past the historic Kappeli café, open since 1867; the elegant Hotel Kämp, originally built in 1867 and a former bank; Stockman, the leading department store; and Akateeminen Kirjakauppa, Helsinki’s main bookstore and a big deal in a country ranked “the world’s most literate nation.”

Along the way is Marimekko’s bi-level clothing and home accessories flagship store (its factory store is a short tram ride away) and the Iittala shop, housing a wide variety of glassware and dishware, including classic creations from internationally-renowned designers Alvar Aalto and Kaj Franck. Aalto’s goal for his beautiful, functional designs: to free glass from traditional geometry and produce the affect of organic, living forms connected to nature. Aalto’s famed bent wood chairs and other enduring furniture are also close by at the flagship outlet of the internationally known Artek and its Artek 2nd Cycle for vintage pieces.

Visitors seeking a unique place to stay may choose Klaus K on Bulevardi, a modern design hotel with passionately styled rooms and visual motifs taken from The Kalevala (similar to Annukka’s penchant for the fable). Each floor includes animals from this folklore, including a swan, eagle, magpie, moose, wolf and bee. Another intriguing new option is the luxurious Hotel Lilla Roberts, once home to the city’s power works and now showcasing Scandinavian design. 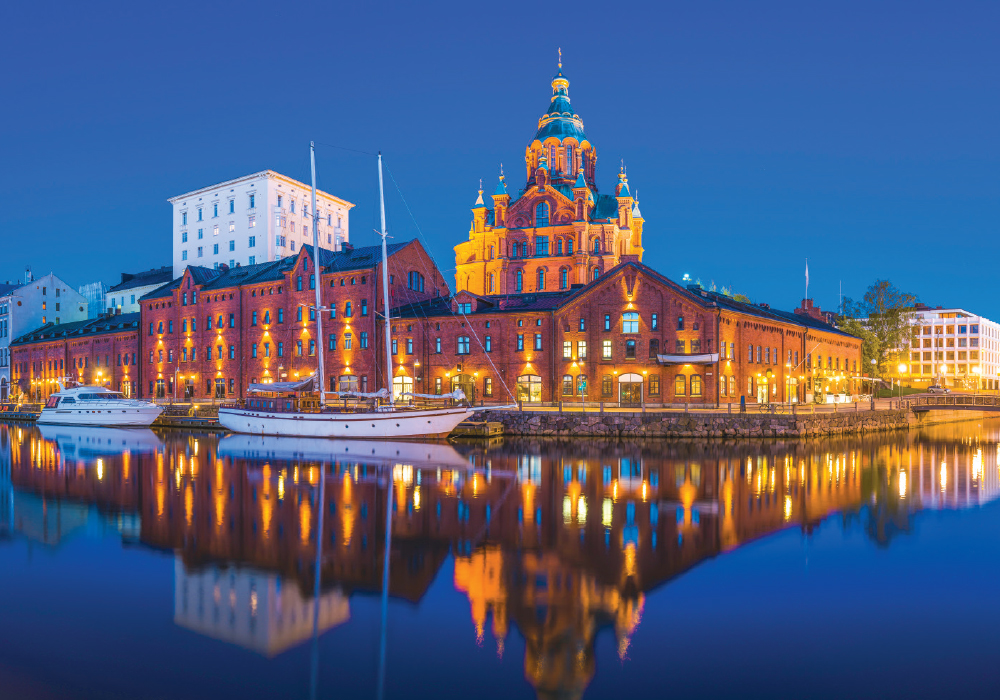 The iconic domes of Uspenski Cathedral overlook the redeveloped warehouses, restaurants and waterfront apartments in the Helsinki neighborhood of Katajanokka.

As much as these spots can introduce visitors to the world of Finnish design, it would be a mistake to miss some of the special locations around the city. One is Kiasma, Helsinki’s world-class contemporary museum of art in a sculptural building of glass and stone. Another, several blocks away, is the landmark central rail station clad in Finnish granite designed by the influential Eliel Saarinen in a late-Jugend (or Finnish National Romantic style) and completed in 1919. Eliel is perhaps best known as the father of architect Eero Saarinen, who designed the TWA Terminal at John F. Kennedy International Airport and the Gateway Arch in St. Louis. A third is Temppeliaukio, a Lutheran church built by excavating down into solid rock. It was completed in 1969, harnessing memorable acoustics and visuals—the rugged natural walls are lined with rock and topped by a copper dome, ideal for hosting many concerts.

One recently opened addition provides an inspiring mix of modern design elements that links back to the most central part of Finnish life throughout history. While there are an estimated 3.3 million saunas in a nation of 5.4 million people, there are relatively few public saunas remaining, particularly in Helsinki. Named Löyly, which references the steam that rises when water is thrown on a sauna’s hot stones, this new public facility aims to create a community for locals and tourists alike. Set along the Baltic waterfront and covered in pine wood with a strong triangular geometry outside, the interior makes use of blonde Finnish birch wood for its three saunas, all heated with wood. There is also a relaxation room with a fireplace, as well as an exit for a dunk or a swim in the sea. In the winter, there is an avanto—that is, a hole in the ice—for the hearty few who brave the plunge. Clothes, of course, are optional.