IT MAY HAVE BEEN A LONG TIME COMING, but in 2015, after five previous nominations for exceptional work in the Broadway musicals The Light in the Piazza, The Pajama Game, South Pacific, Nice Work If You Can Get It and The Bridges of Madison County, Kelli O’Hara finally won her Tony Award. Choking back tears during her acceptance speech for playing Anna in The King and I, the actress, who had already left the production, promised, “I love what I do…I’ll be back! Maybe not up here but on a theater stage.”

As one of only a handful of true modern theater stars, O’Hara is bound to make good on that promise, even as the responsibility of raising two children with her husband, actor-musician Greg Naughton, holds first priority on her attention. “We do the best we can,” the actress said. “Some days it feels like we’re really doing it, and some days it feels really imperfect, but I think everybody feels that way no matter what business they’re in.”

Broadway, therefore, may not see O’Hara for another season or two. But the theater star can still carve out time for some TV work (Masters of Sex, The Accidental Wolf) and concert engagements, the latter of which will lead her to Stony Brook University’s Staller Center on December 10. Similar to her October evening at Carnegie Hall, the program will mix originals and show tunes but in a way, the songstress explained, “that you might not expect. There will be songs from the shows that I’ve done, but I’d do ‘This Nearly Was Mine’ from South Pacific, as opposed to ‘Wonderful Guy.’ And ‘I Have Dreamed’ from The King and I as opposed to ‘Hello, Young Lovers.’ Songs that represent the shows I’ve done but in ways that allow me to share other sides of myself.”

That self, O’Hara explained, was raised not on Broadway, but on movie musicals. “I didn’t think of myself as wanting to be a movie star because the reality of my generation is that those movies weren’t being made anymore. A movie star when I was a kid was Molly Ringwald. But for me, it was Shirley Jones, Julie Andrews—my idol. It was every movie I could get my hands on where someone was singing…And when I started to dig into voices, I found myself wanting to know who Marni Nixon was. Carol Burnett was a huge influence. I’m not a comedienne, but she was alive and full of everything that I loved.”

The actress confided that when she auditioned for The Pajama Game, she offered a blatant imitation of Doris Day. “I think I made the part my own later on, but just to get the part, I thought, ‘Well, I can do [her], so here it comes.’” And O’Hara’s Eliza in 2007 New York Philharmonic’s My Fair Lady? “A complete homage to Julie Andrews. And in other shows, there are personal people in my life that I channel, like both of my grandmothers and even my mother. When you truly know someone other than yourself, it’s very useful to play a person you’re not.” 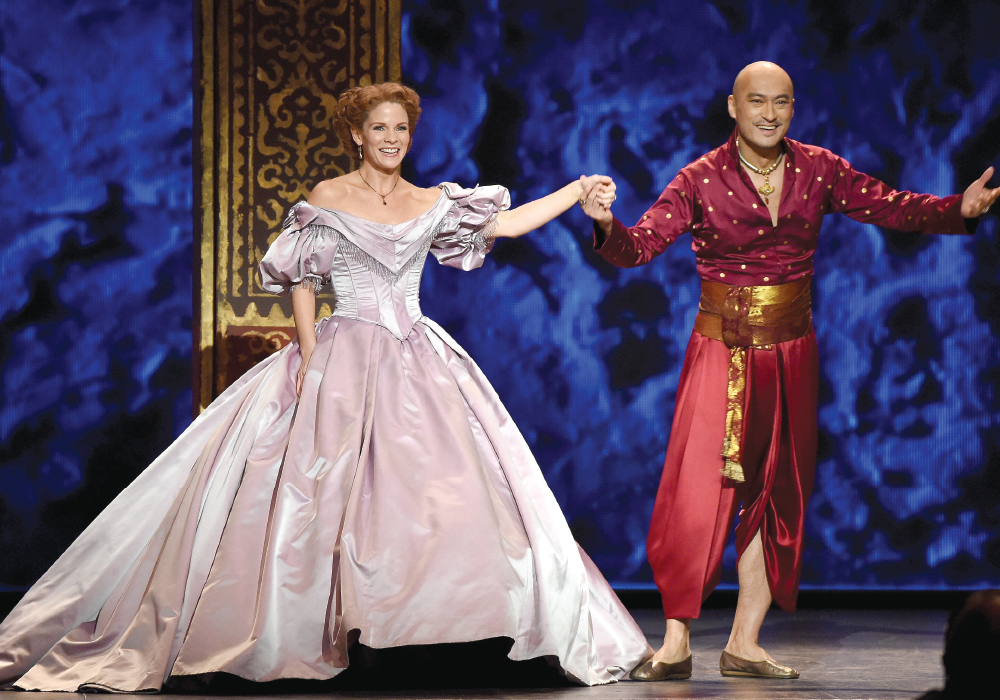 The kind of person O’Hara is could not be more grateful for her rare position among such top-tier Broadway divas as Laura Benanti, Audra McDonald and fellow Oklahoma City University graduate Kristin Chenoweth (who helped O’Hara get her first agent). However, she’s also realistic about her place in the showbiz hierarchy. “My goal will always be theater. But we have to be honest with ourselves. Maybe a lot of people in New York know me on the Broadway stage, but when you’re talking about Americans coming here and buying tickets to see Broadway shows, they’d much sooner recognize a bigger star’s name…commercial producers need to have that name. And I’m not that name. I’ve worked alongside Harry Connick, Jr. and Matthew Morrison and Matthew Broderick. I’ve been lucky to have co-stars alongside me who are names. Whether the theater community likes it or not, there’s pressure on all of us to get TV and film credits in order to come back to theater and sell tickets.”

Asked if she ever considered packing it in during the lean times, O’Hara replied, “It’s hard for me to even admit this. There were lots of times in my career when I paid dues and pounded that pavement…there were a lot of things I didn’t get. But I did win my first audition. I came to New York on Thursday and auditioned for my first musical on Monday and that was my first job…an ingénue role in a non-union production up in Sugar Loaf, New York, of Something’s Afoot.

“But it’s not like I came here and got a Broadway show right out of the gate. I had a lot of people helping me. I did nothing on my own. I had a lot of heartbreaks, but there was never a time I thought I’d give up because I had light at the end of every tunnel. When I came to New York, I gave myself two years to get a Broadway show, and then I would go home. Literally two years to the month, I made my Broadway debut and I’ve never looked back.”