CHEF STEPHAN BOGARDUS remembers the first thing he ever ate at the North Fork Table and Inn. “Nori-wrapped tuna over a bed of fennel, radish and cucumber with a ponzu sauce. It was one of those moments. Now, looking back on it, it’s a super-simple dish with this beautiful product, which was so Gerry Hayden. It just blew my mind.”

The tuna was undoubtedly divine, but the key player in this memory is Hayden. A transformative figure in the Long Island food community, Hayden was the founding executive chef at North Fork Table, a three-time James Beard Award nominee who is widely credited with ushering in the region’s farm-to-table movement that is now the backbone of fine-dining restaurants across Nassau and Suffolk.

To understand Bogardus’ relationship with not just Hayden, but also the restaurant he now knows as a second home, you have to go back to the beginning.

Bogardus was born and raised in Cutchogue, right next door to North Fork Table, and began cooking when his tile-setter father befriended a restaurant-owning client who needed an extra set of hands for his recently acquired food truck. After high school, Bogardus graduated from the Culinary Institute of America and returned home to work at a local restaurant just as North Fork Table opened its doors. A bit of serendipity would soon put him face-to-face with the man who would shape his career. “I started coming in after work…I actually got stood up on a date here once. I ended up doing a single tasting menu. But chef came out with the fourth course and talked to me for a little while.” Bogardus soon asked for a spot in the kitchen the only way he knew how: “Every job that I’ve ever had, I knocked on the back door with my resume and a set of knives and asked if I could hang out.”

Like every culinary neophyte, Bogardus started at the bottom. “I spent three days cutting before I cooked anything. I just sat there and cut vegetables: Brussels sprouts and red cabbage and green cabbage. [Hayden] saw how much I liked it and started teaching me some things.” It was the beginning of a tutelage that would shape Bogardus’ cooking to this day. “Gerry taught me how to look at food differently. He taught me the process on how to build a dish. He didn’t teach me recipes, he taught me techniques, he taught me a lifestyle. He taught me how to cook.”

After two years, Bogardus, feeling he had learned everything he could at North Fork Table, left for a job in Florida. A year in, he asked to spend his summer vacation back home—in Hayden’s kitchen. By this time, Hayden had been diagnosed with ALS, a neurodegenerative disease that would gradually but steadily strip him of his physical abilities. His mind was as sharp as ever, but the disease would render him unable to cook. “I had the opportunity to be the hands for his mind. It was this really open, beautiful dialogue; mentor and mentee working together to accomplish a goal.” Bogardus’ summer vacation became permanent once Hayden offered him the job of chef de cuisine, which ignited the next step in his evolution as a chef. “I had the opportunity to choose Manhattan and a three-star [restaurant] or to come out here and be the chef de cuisine. Gerry was offering the same education, if not better, on a far more expedited path.” 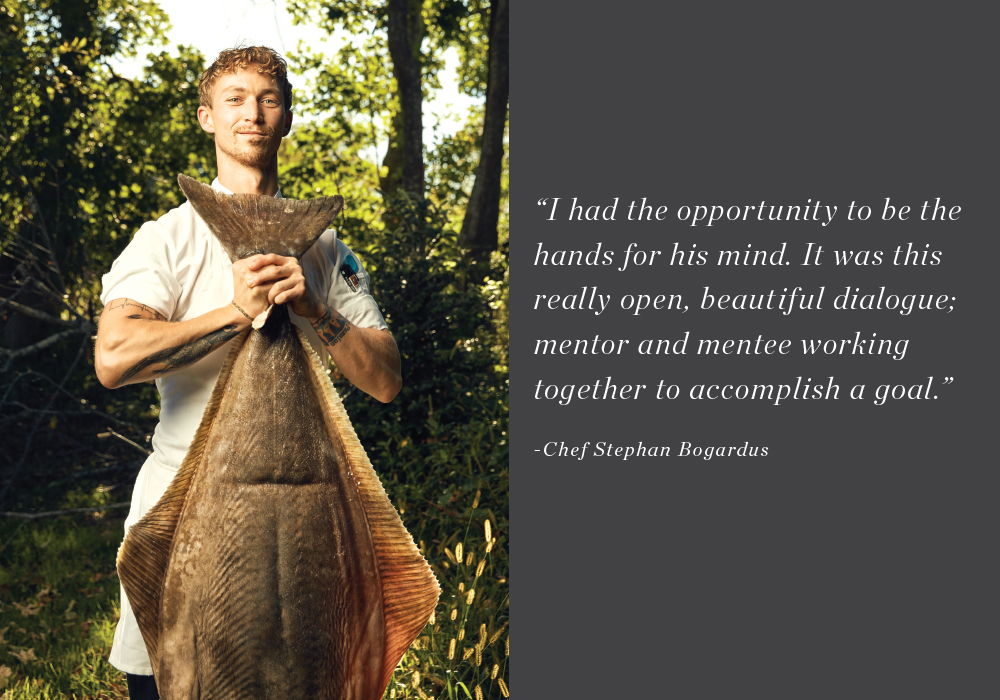 After a second two-year stint, Bogardus accepted a job at a Rochester country club, hoping to find the personal-professional balance he longed for. Last September, he got the call he had been dreading: Hayden had succumbed to ALS. Immediately after the memorial, the owners of North Fork Table, including Hayden’s award-winning pastry chef wife Claudia, offered the then 27-year- old Bogardus the chance to return once again and run the North Fork Table kitchen.

It was an easy decision. “Country club life is not independently-owned, fine-dining restaurant life. I never had that same sense of self and pride in my work…The North Fork and the smell of the salt air and the farmers and the dirt, there’s something really special out here and I really missed being a part of it.” Once back home, Bogardus naturally began cooking in Hayden’s style. “It’s just a part of who I am. I’m always going to hear his words. I get his flavor profiles. I get what he was doing.”

What Hayden was doing was cultivating relationships with farmers and producers, securing the finest ingredients the Island has to offer. These partnerships are still evident on Bogardus’ menu today, with purveyors like Southold’s Invincible Summer Farms, Mattituck’s Browder’s Birds and Cutchogue’s Satur Farms providing the ingredients for his dishes. “As soon as it became known that I was back in the kitchen, all the farmers and people within the community, other local business owners, would come in for dinner and say ‘hi.’ I started getting all this produce that just makes my job so much easier.”

Like Hayden, Bogardus recognizes the farmers’ crucial role and gladly assumes his “middle man” position. “The farmers do most of the work. I figure out what goes with what and how to put it on a plate and make it look nice. But without this symbiotic relationship that we have out here and these small, driven boutique farmers doing amazing things, I wouldn’t be possible…My job often is to not screw it up too much.”

But his true responsibility is to keep alive North Fork Table’s vision: replicating dishes from one of the culinary capitals of the world. “We’re cooking food to mimic Michelin three-star restaurants in villages in the countryside of France, which is where the inspiration for this restaurant came from—when [Hayden] and Claudia would go around Europe eating at these small restaurants. That’s why he came out here, because it reminded him of small villages outside of Champagne.”

Even with this mission in mind, and Hayden’s teachings indelibly engrained in his work, Bogardus rightfully makes his own mark on the food he serves. “I’m comfortable very much with who I am as a chef and I try new things. I still have fun with it. My cuisine is still progressing.” Bogardus points to the restaurant’s salad of biodynamic tomatoes as an example. “I’m pretty sure chef wouldn’t have used sherry vinegar and tomatoes. He would have done a white balsamic or some crazy expensive super lux vinegar, like 80-year-old stuff that no one else had.”

The protégée is doing just fine putting one foot in front of the other to find his own path. In July, The New York Times’ review of the new North Fork Table concluded, “Nearly everything we tried was exemplary. The dream continues.”

But Bogardus is just getting started. He is now able to impart the wisdom bestowed upon him by great chefs onto those who are just starting, like he was not too long ago. It is the completion of a circle that now has him firmly ensconced as the mentor. “For years, this restaurant has given me the opportunity to pour my heart and soul into it. All throughout my career, I’ve been really, really blessed with knowledge and education from these amazing people and the coolest part about what I’m doing now is the opportunity to give that back, because it’s making me a better cook. It’s making me become a great chef.”