During the Middle Ages, Jerusalem, in many ways, was the center of the universe. Kings and nobles, pilgrims seeking inspiration or absolution, traders from as far as Scandinavia and Asia, and warriors hoping to conquer the city crowded the streets of an area not much larger than midtown Manhattan. Today, it’s filled with some of the most iconic and sacred works on earth, and the objects visitors brought home fill palaces, museums and houses of worship around the world. For a brief time, 200 of the most exquisite examples have been brought together at the Metropolitan Museum of Art in Jerusalem 1000-1400: Every People Under Heaven.

The remarkable exhibition is the culmination of six years of scholarship, diplomacy and frequent flying by Barbara Drake Boehm and Melanie Holcomb, the Met’s esteemed medieval curators and the museum world’s Indiana Joneses. Together, they drew up a dream list of masterworks from the Middle Ages and went out and brought them back. These works present a sweeping view of the years 1000-1400 and demonstrate the key role the Holy City played in cultivating and influencing the arts.

Met director Thomas Campbell noted that “more than four dozen key loans came from Jerusalem’s diverse religious communities. Some of these works have never before been shared outside of the walls of those temples, mosques and churches in which they’re housed.” 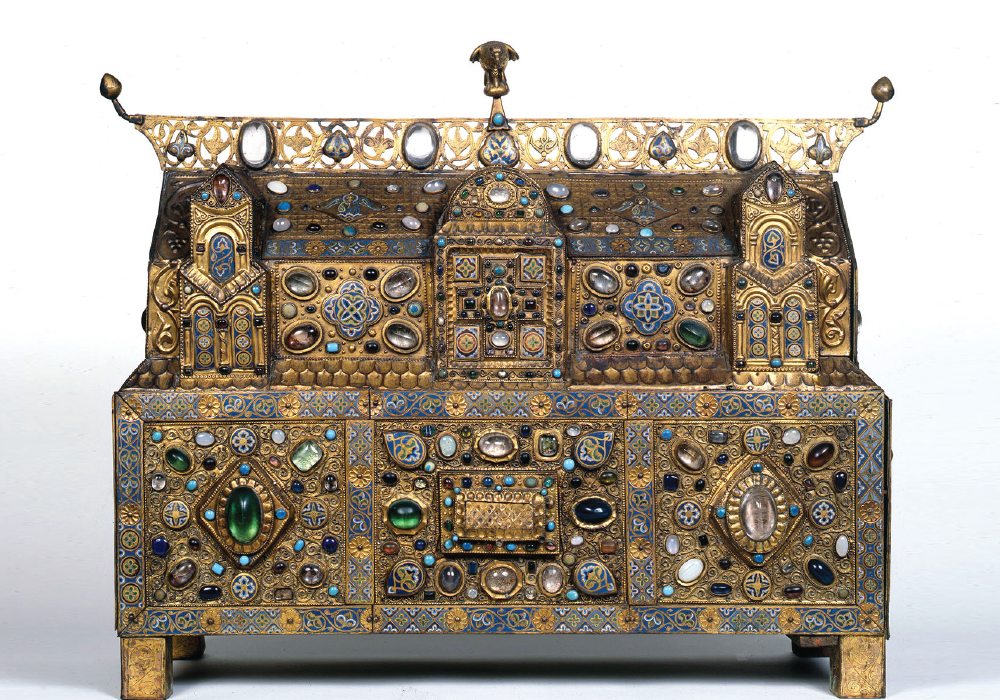 Through objects dazzling as much in their rarity and their stories as in the jewels they don, the show presents the city that the three Abrahamic faiths—Judaism, Christianity and Islam—hold sacred, but also shows a secular city, and one that welcomed all faiths. Rather than focus on gold, silver and diamonds, the ecclesiastical bling which the city has aplenty, Boehm and Holcomb also chose pieces that tell the story, “of how multiple competitive and complementary religious traditions gave rise to one of the most creative periods in the city’s history,” Campbell explained.

“Poets and songwriters talk about a love for Paris, leaving your heart in San Francisco or making it in New York,” Boehm said. “But Jerusalem is perhaps the only city where what’s talked about is a kind of fever. That pertained in [the medieval] period and pertains in much of the world still today. What we’ve done is to follow the art, and in following the works of art we find a period of amazing creativity.” Holcomb added that the exhibit, “is about the inspiration that the city provided to art and artists at a moment where Jerusalem was seen as the center of the world.”

The show brings across that it’s the religious role of the city and the fervor of believers that drew people, drove tourism, coaxed patrons, roused crusaders and inspired countless artists to express their devotion. The exhibition starts with a pile of 700 gleaming 24-karat gold coins, caressed by spotlights. The treasure, excavated 2015, testifies to the enormous wealth coursing through the city. Ships from Europe, caravans from the east and pilgrims from every corner of the known world made the city a cultural crossroads, fueled by faith.

Boehm described medieval Jerusalem as a kind of “college town” filled with religious scholars. She pointed out a Hebrew manuscript rare in its portrayal of a human figure. “It’s a fantastic image from the Regensburg Pentateuch of Aaron reaching across from one side of the book page to the other to light the candle of the temple menorah.” In cases surrounding it are ancient books in 12 languages including Latin, Coptic and Samaritan Bibles, Qur’ans with lavish calligraphy, books of Arabic poetry, gloriously painted Hebrew texts and a plan of the Temple Mount drawn by the legendary Jewish scholar and philosopher Maimonides.

Holcomb highlighted a painted page from a 13th century Syriac lectionary showing “young and old, redheads and graybeards, many different races and skin colors…every people under heaven.” Along with priceless manuscripts, there are spectacular gem covered crosses and chalices, paintings of gleaming menorahs and Torah pages lettered in gold, delicate glass lamps and perfume bottles used to bathe mosques in light and the scent of roses, and stunning architectural details from several sacred sites. 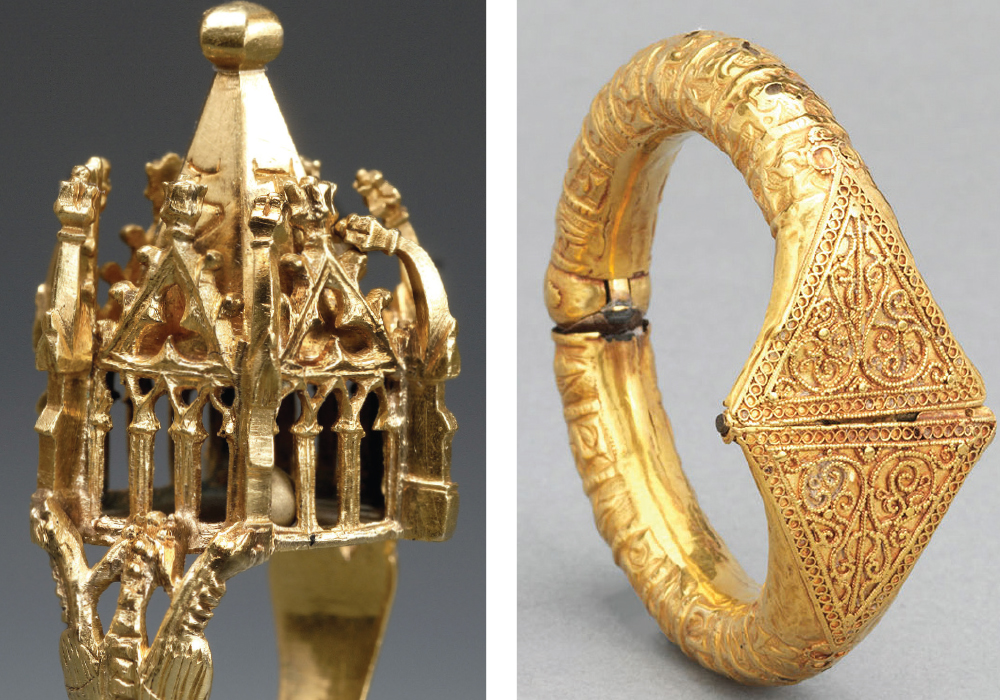 Boehm said today’s audience should have no trouble relating to works created a millennia ago. “The artist makes that easy.” She pointed out a set of column capitals from a basilica in Nazareth. Just after their completion in the 1170s, they were buried to protect them from Saladin’s advancing armies. Unearthed more than 700 years later, the intricately carved saints and demons are perfectly preserved. “Those demons have really scary heads, but really gorgeous bodies…those images feel like that’s what temptation is about—something that’s so alluring, and you know it’s dangerous at the same time. The artist has gotten to that notion, the draw and the warning, that push and pull. That’s temptation.”

Though they were made in about 1135, the delicately decorated covers of The Psalter of Melisende, Queen of Jerusalem, are completely relevant today, Holcomb said. “The ivory covers are so clearly about what makes a good ruler. The back has these poignant, sweet scenes of what of good ruler is supposed to do…feeding the hungry… sheltering the homeless. My favorite scene is at the very bottom. The king is visiting someone in prison and you see this little person in shackles with a huge smile on his face because the king bothered to do that. That’s not an accident,” she said, adding, “What I would give to have those kinds of ideals and those kinds of rulers.”

The final gallery shows what Holcomb described as “the marvelous paradox of Jerusalem…always straddling the earthly and the heavenly.” Boehm added, “There is a notion common to Judaism, Christianity and Islam that Jerusalem is the closest point to heaven.” Here, she said, “Artists [are] trying to imagine something almost unimaginable, something beyond our experience. This is where medieval art is at its best.” They close the exhibit with glorious works filled with angels carrying the faithful to eternal paradise in images that whisper of both mortality and immortality. There are gorgeous paintings leafed in gold and the glittering Chasse of Ambazac, a showstopper of a chest that represents the city itself. But it’s one of the humbler objects, The Catalan Mahzor, a marvel of microscopic calligraphy, that holds the parting message. In incredibly tiny Hebrew letters, the artist spelled out a verse from Psalms, “Pray for the peace of Jerusalem.”