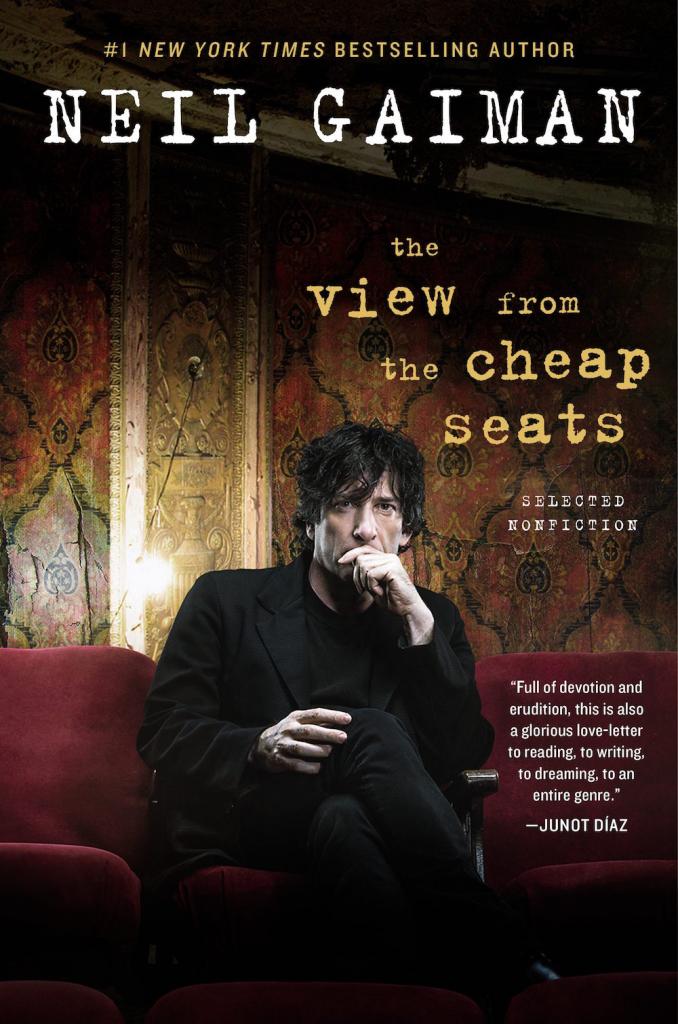 You could spot the lead singer from where you were. Barely, but you could. From your place in the nosebleed section, he looked like a gumball machine toy or some sort of bug, but oh well, his songs were really what you went for.

So was it worth the price of the ticket to sit at the edge of the crowd? As in the new book, “The View from the Cheap Seats” by Neil Gaiman, it depends on how you see things.

Though you may know author Neil Gaiman from his graphic novels and fiction, you might not know that he also writes nonfiction now and then. But this book, he says, “is not the complete nonfiction of Neil Gaiman. It is, instead, a motley bunch of speeches and articles, introductions and essays.”

In addition to being a writer, for instance, Gaiman is a hungry reader and a lifelong supporter of books and places that have them; in fact, many of the chapters you’ll find here consist of “an impassioned plea” for libraries and librarians. Read, he begs, and he follows with a comment he heard once: the prison industry knows how large to build their facilities by looking at the literacy rates for nearby children. Support your library, he demands, so you’re not “stealing from the future to pay for today.”

“Words have power,” says Gaiman, and that includes the power to take readers to other places, or to make them uneasy and shuddery. He’s a fan of Halloween, of “stories that stray into the shadows,” and of tales that seem to portend bad things. He’s also a fan of other authors: Douglas Adams, Harlan Ellison, Stephen King, and King’s sons, who are also writers.

Here, Gaiman writes of awards given and received. He tells what it’s like to make a movie from one’s own work. He looks at comics, how they’ve changed, and why they’re very important; he also says the same of poetry. He writes of fairy tales, freelancing and family. And he tells readers to “make good art,” especially when things get tough.

Let’s get this out first: “The View from the Cheap Seats” does not include fiction. There’s no novelized anything here, no scary tales, nothing like that. If that’s what you want, look elsewhere.

Readers who want a celebration of reading, however, are in luck with this book. Author Neil Gaiman writes nearly entirely about the literary world here: insiders, people who bring us books, and the keepers of said books. These are words that, if you’ve gotten this far in a book review, will make your heart soar with their thought-provoking ability and their joy for printed works. Alas, there’s a lot of repetition inside these pages, too, and a lot of names with which you may not be familiar.

Will that mar your love of this book? Maybe. Maybe not, depending on the kinds of things you like to read. As with everything, loving “The View from the Cheap Seats” is all in the perception.