Panoramic views of the Shinnecock Canal instantly turned Caribbean-inspired Rumba into a destination spot when David and Rachel Hersh unveiled the spot in 2010. Same went for sister restaurant CowFish, which is a mere five-minute jaunt on shuttle boat Rumbarge away. Now, the couple is bringing the destination to Main Street, Patchogue.

The couple opened Rhum in December, and guests are already using it as a way to escape to summer vibes. There’s Island-inspired decor like seashells and barrels and teal-colored walls.

“We have a different vibe the second you walk into the building,” said executive chef Terri Novak, who made the trip to Patchogue after serving as executive chef at Rumba for five years. “It’s nice to bring that to westerners who don’t go out East in the winter or don’t want to go there in the crazy summer.”

The three-floor bar will open a rooftop come summer, but five favorite dishes provide an early taste of warmer days ahead. 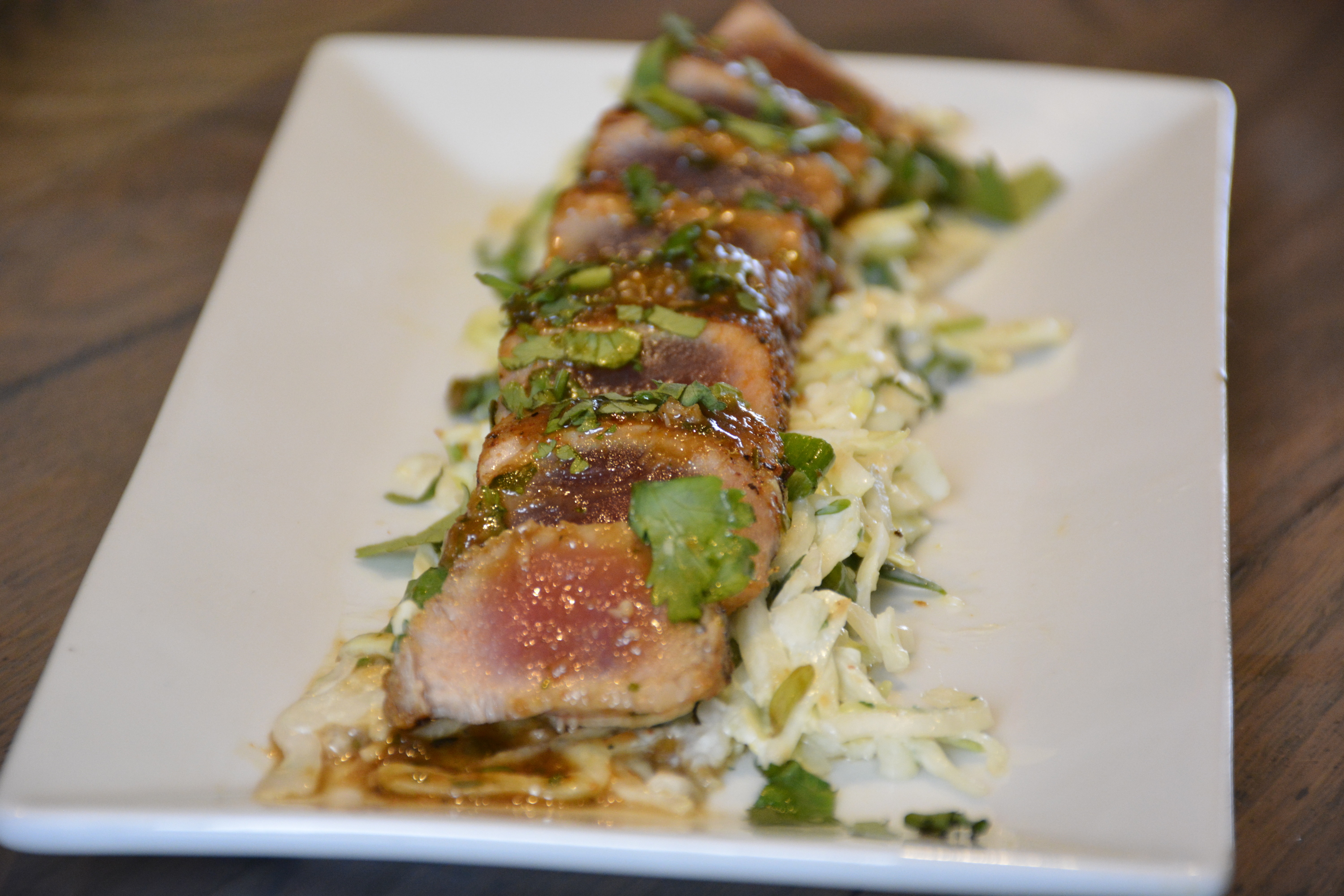 Blackening seasoning adds a little texture to the seared ahi tuna, one of the restaurant’s most popular appetizers, and the house-made Island slaw gives it a crunch. Novak also seasons the dish with a ginger soy vinaigrette on the fish. “It’s nice, a little salty and blends in with the coolness of the slaw.” 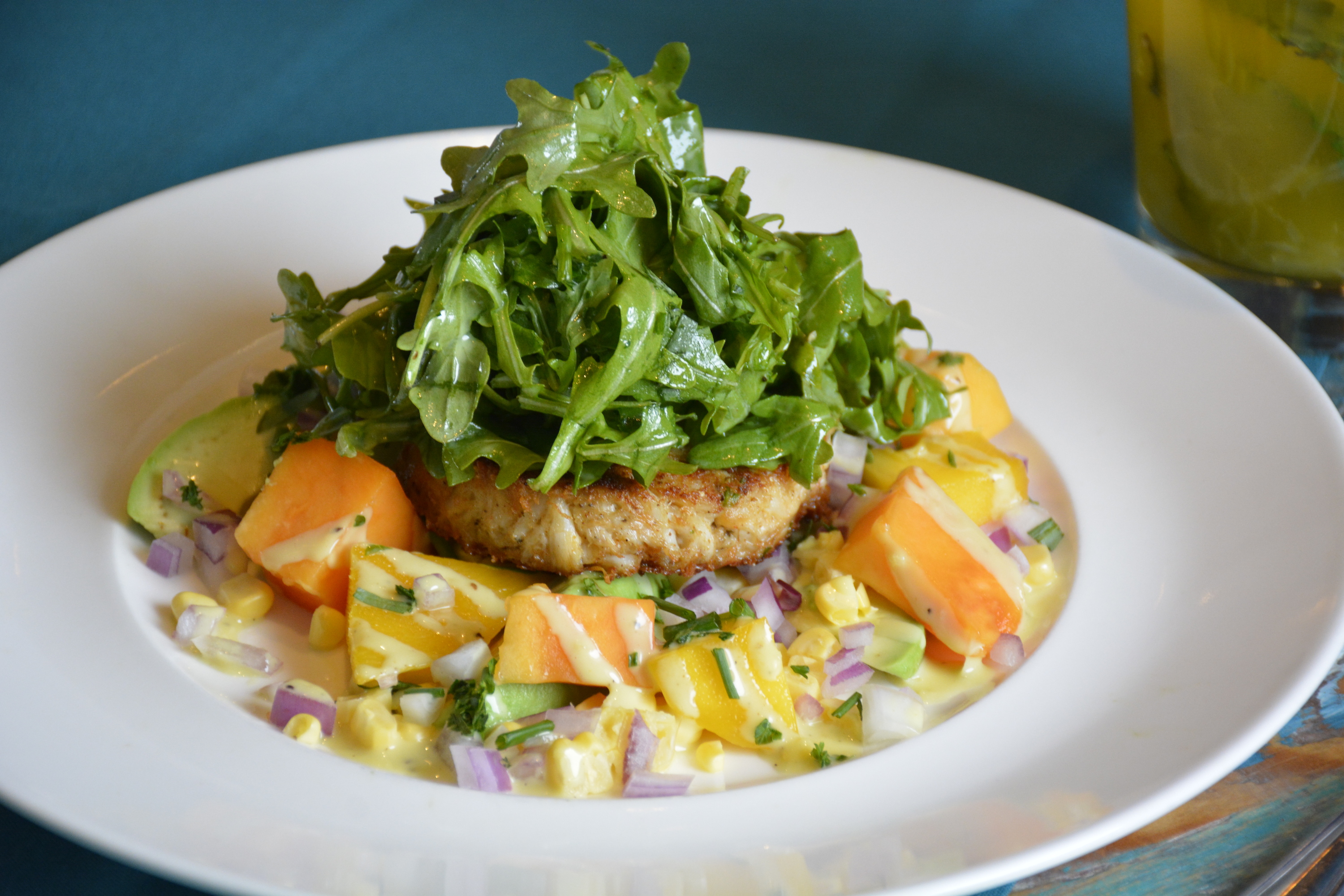 Presentation and taste combine to create a salad as unique as Rhum’s teal exterior looks on Main Street. “It’s not really what you think a salad is. The avocado is fanned out [and] the fruit, corn and crab cake is with it.” It’s topped with an arugula that boasts a fresh, peppery taste. “You get a different flavor with every bite.” 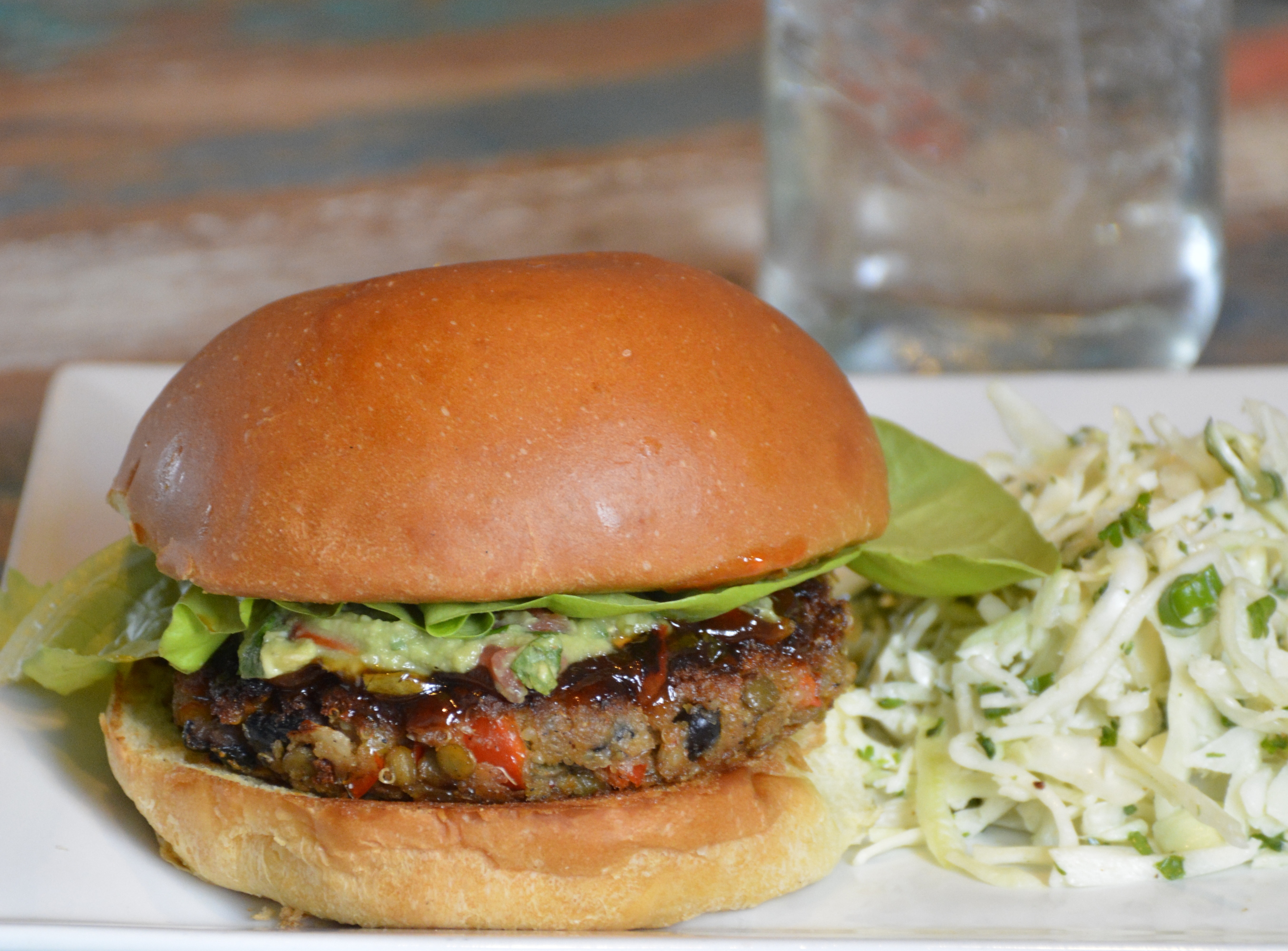 Rhum’s resident vegetarian option, the veggie burger is made with lentils, quinoa, black beans, oat bran and a mix of spices like cumin, cayenne, red peppers and white onion. “All that together makes a really nice 7oz patty.” The kick that comes courtesy of the apricot barbecue sauce, made with apricot preserves, barbecue sauce, Tabasco sauce and cilantro, doesn’t hurt either. “As someone who eats meat, I love this burger. I know I made it, but I’m not just saying that,” Novak laughed. Make it vegan by ordering it without the brioche bun, which has butter. 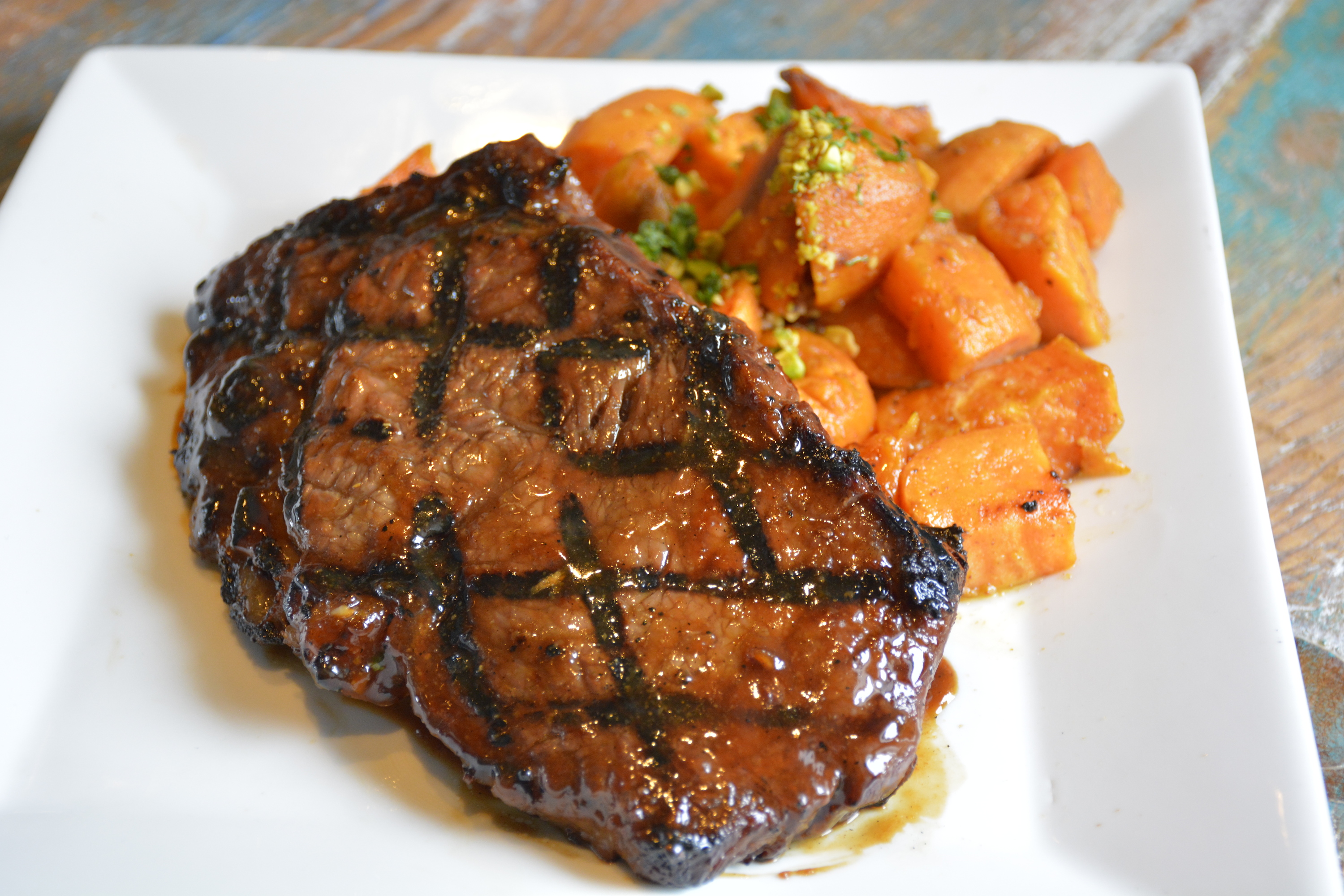 Novak called this dish Rhum’s version of meat and potatoes. It’s marinaded for 24 hours in a pineapple and soy-based sauce made in-house. “All that really soaks into the meat. With that, there’s sugar in there, so when you throw that on the grill…it caramelizes very well.” Guests have likened it to Korean barbecue, but Novak said it’s a little sweeter. The island rib eye comes with roasted sweet potatoes and cinnamon butter, making it a hearty dish perfect for current temps. 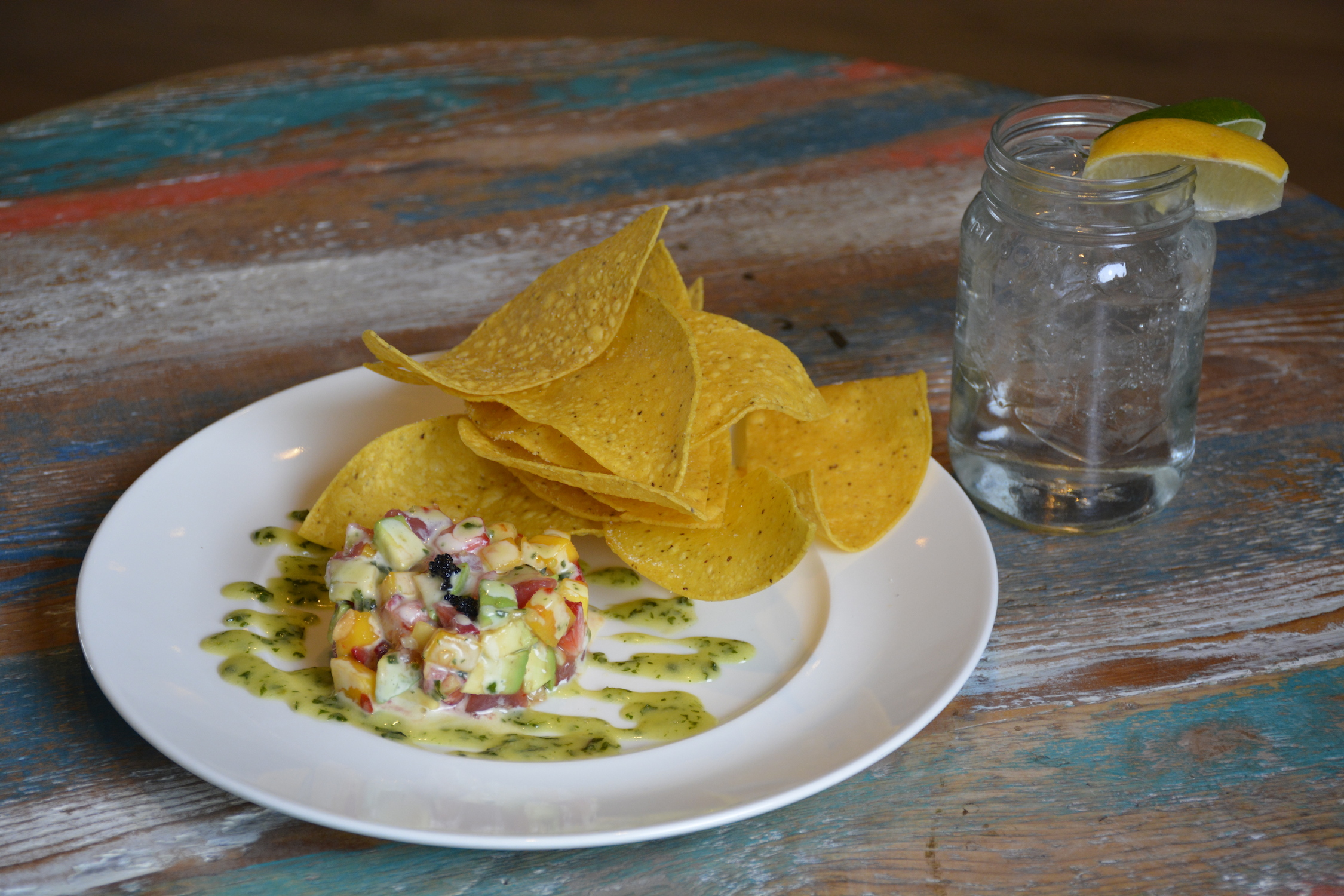 Your teachers always told you not to judge a book by its cover, but it’s OK to judge the tuna poke by the photo. It’s as good as it looks. Novak mixes tuna, mango, avocado, macadamia nuts and strawberries with a sweet chili sauce for a dish that is essentially Hawaii on a plate. The fried chips, made fresh each day, keep the appetizer from being too sweet. “It’s nice if you want to have Rum punch with it…It really fits with our vibe. It’s super colorful.”