Step aside kombucha, there’s a new brew in town that’s set to be the next big thing in the feel-good drinks department. Hailed as “the king of medicinal mushrooms,” the healthy fungus has been prized for its beneficial properties for thousands of years. And now it’s being brewed and bottled locally by Suffolk County residents Bridget LeRoy and Debbie Falborn via their recently launched beverage company, Chaga Island.

Chaga is a standout mushroom. Harvested from the birch trees of the northern U.S. and Canada, it more closely resembles a piece of wood than a fungus. Touted for its antiviral, antibacterial and immunity-boosting properties, the drink is 100 percent organic, vegan, shelf-stable and raw—not to mention refreshing and mild. Moreover, chaga has been known to shrink tumors, shorten illnesses, increase longevity and can help fight against asthma, bronchitis, psoriasis, Lyme disease and autoimmune disorders.

Falborn, a registered nurse and self-proclaimed “kitchen alchemist,” has been practicing on eastern Long Island for 35 years, providing a full range of care from pediatrics to palliative care. A believer in both traditional and alternative medicine, Falborn became interested in bottling slow-brewed chaga after witnessing the restorative and healing properties of the super mushroom first hand. 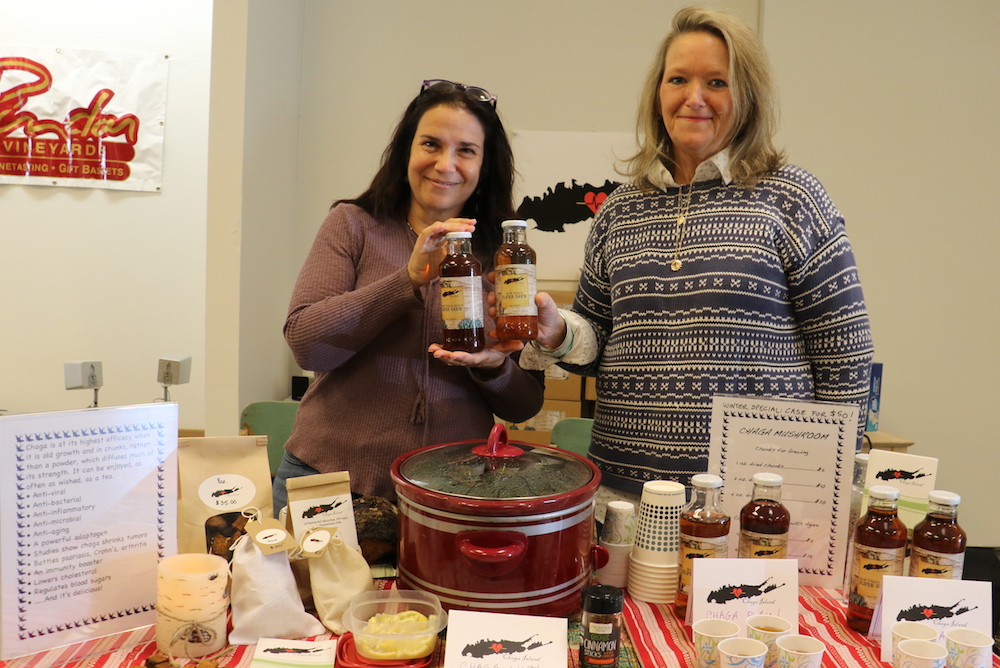 “I have used it for people with medical conditions for years,” Falborn said. “It is very adaptive, meaning what you need it for, it works for. It assists with all kinds of things. [Chaga Island] is a testament to everything it does. We wanted to share it.”

Joined by business partner and longtime friend LeRoy, who holds a certification in advanced herbalism from the Herbal Academy of New England, the duo is now a staple at the Riverhead Farmers’ Market where they serve up samples of their master brew in addition to selling their full line of Chaga Island products.

Chock-full of goodness, the classic version of the brew has only two ingredients—organic chaga and pure filtered water. Chaga Island offers both a classic blend and an organic agave nectar version for those who enjoy a hint of sweetness. Make it last with the company’s packaged raw chaga for home brewing. Simply add the chunks to water, simmer on a low temperature and enjoy. Since chaga has no discernible flavor, it can be served over ice or warmed up—perfect for getting rid of that mid-winter chill.