Dripping with opulence, presidential suites are made for exactly what the name implies—a commander-in-chief. In fact, it’s believed Woodrow Wilson unknowingly helped coin the term during his presidency (1913-1921) thanks to demands he reportedly made on his hotel rooms when he traveled. These costly rooms are filled with amenities the average hotel guest can only dream of. And many people, no matter what side of the political aisle they’re on, could use a comfortable respite from the turbulent political climate, especially with inauguration day inching closer. Five glamorous New York City presidential suites offer guests a chance to unplug, unwind and take the time to seriously consider unfollowing the soon-to-be President on Twitter. 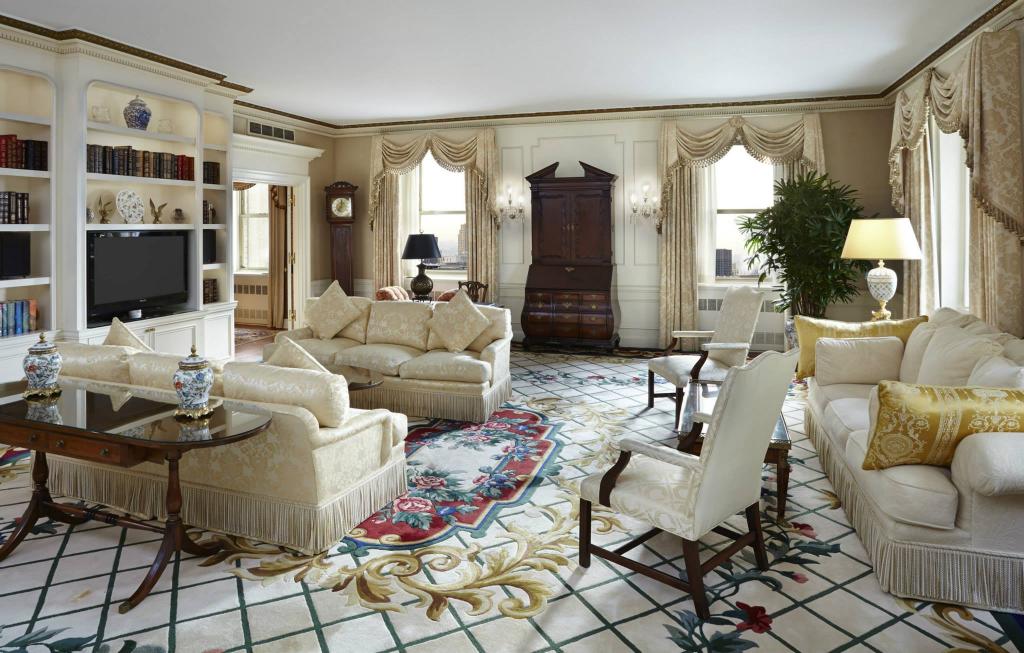 There are few places as iconic as this legendary New York City hotel, which drips with as much history as it does luxury. The Waldorf Astoria has catered to every president since Herbert Hoover, who called it home from 1933 until his death in 1964. The 2245-square-foot, three-bedroom presidential suite even includes a rocking chair from President John F. Kennedy and General Douglas MacArthur’s personal desk. Go 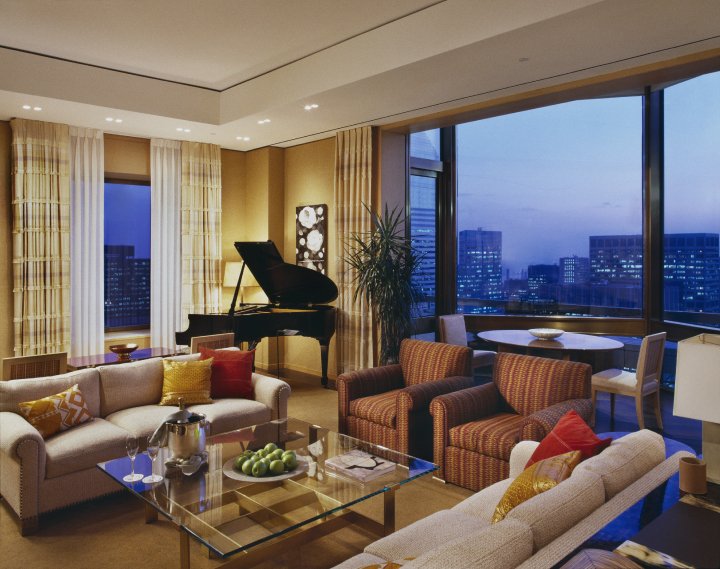 The two presidential suites at the Four Seasons New York sit alone on the 51st floor. It’s easy to be blown away by the breathtaking views made possible by the floor-to-ceiling bay windows. One suite looks over Central Park while the other faces the Empire State Building and the Chrysler Building. Wool carpets and original oil paintings decorate the suites, which also include game tables and a marble gas fireplace. Go 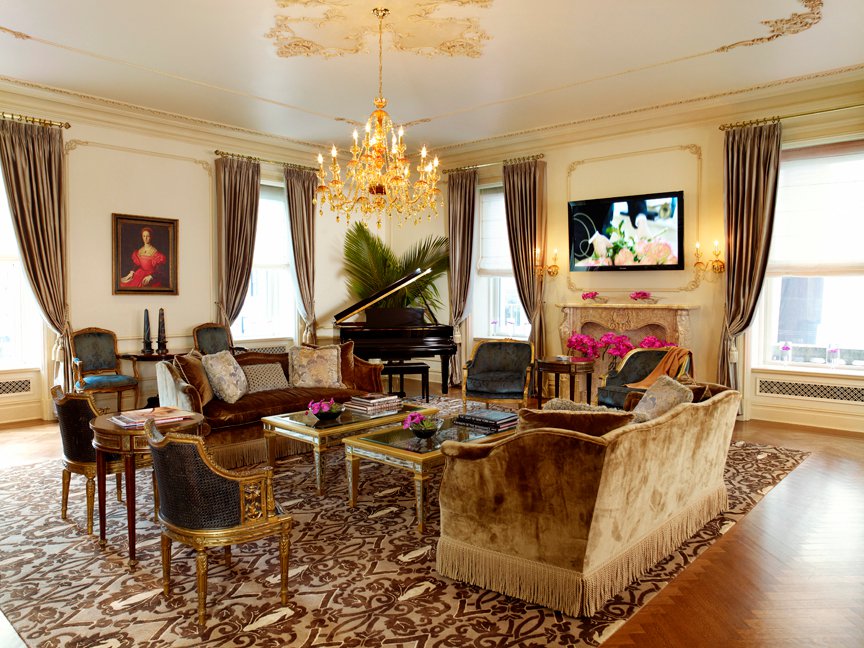 The Great Room within The Plaza’s Royal Suite. image: facebook.com/theplazahotel

The fact that it’s a National Historic Landmark proves how iconic The Plaza is. From The Beatles to Marilyn Monroe, the guests at this luxurious hotel through the years have also been notable. It’s only right for the three-bedroom Royal Suite to be a lavish living space having a private elevator, library, fitness room, remarkable dressing area and master bedroom. Go 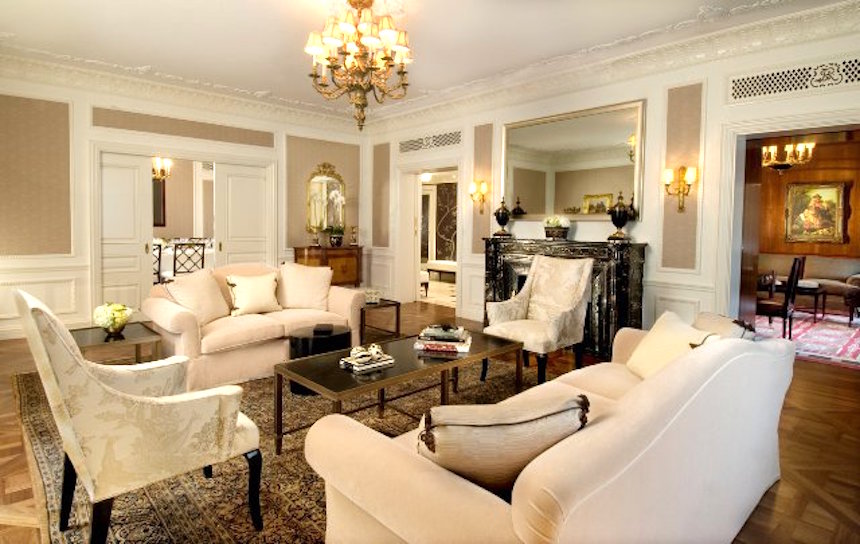 This gorgeous 3,340-square-foot space is like an apartment straight out of a dream. It has three bedrooms, four bathrooms, dining room, living room, library and a balcony overlooking Central Park and Fifth Avenue. Guests, which have included Elizabeth Taylor, also have their own private 24-hour butler. It doesn’t cost $35,000 a night for nothing! Go 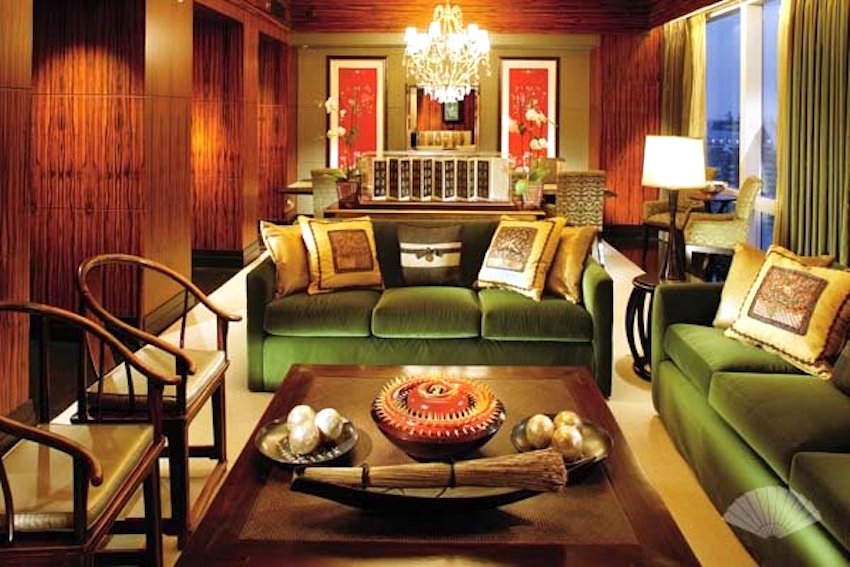 On the 53rd floor of the Mandarin Oriental, New York sits the breathtaking, stylish presidential suite. There’s eye-catching artwork, silk walls in the master bedroom and gorgeous views of the city’s skyline making it quite easy to feel like royalty. Go