RXR Realty’s 10-figure project on Glen Cove’s waterfront is poised to reinvigorate an area that has struggled for decades. After years of planning, RXR broke ground on the 56-acre mixed-use development, Garvies Point, on Dec 6.

The project calls for more than 550 for-sale condos, 540 rental apartments and roughly 75,000 square feet of commercial and retail space. The first phase of construction, now underway, includes 385 rental units and 167 condos as well as the redevelopment of nearly 28 acres of public park space, including a 1.1-mile boardwalk, playground, walking trails, bike path and dog park. “We are creating this fantastic public environment,” said RXR first vice president of development Frank Haftel. “The mix of uses within the project—as well as the public space, the retail, the office spaces—will create a vibrant, active and diverse community. [It] will be a very inviting place. The project itself will be a destination, but we believe in the future of Glen Cove. We think the downtown will be revitalized and the entire area will be more desirable.”

In the eyes of the municipality, the project is an economic must-have for the city and its residents. Mayor Reginald Spinello has been a champion of the development since taking office in January 2014. Spinello, who is currently serving his second term, said that when elected mayor, he “…entered into a project that began almost twenty years ago.”

To understand the feat of the Garvies Point project, one must consider the property’s past. Historically, the city has grappled with reviving its waterfront, thanks to a noxious cocktail of local politics and environmental issues. The property, owned by Dr. Thomas Garvie in the 19th century, was once the site of a booming commercial shipping hub. Eventually, with the creation of a steamboat service to New York City, Glen Cove became a commuter destination where neighborhoods of lavish estates for wealthy executives were built. The transformation of the city continued into the 20th century when various industries cropped up along Glen Cove Creek, a small estuary that fed into Hempstead Harbor. 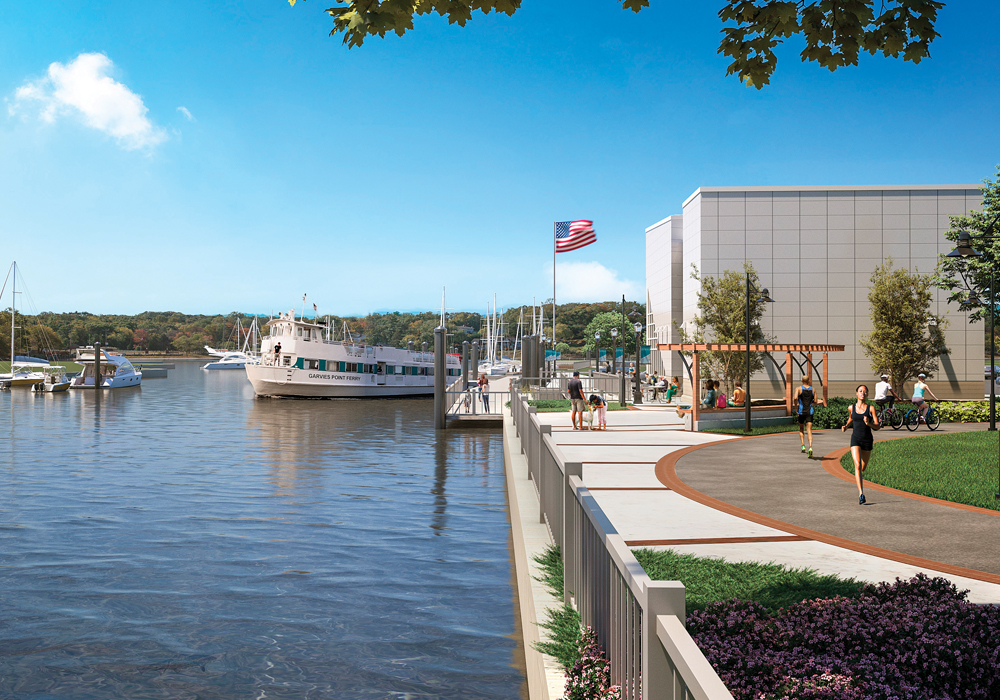 Garvies Point developers plan to restore the 45-minute commuter ferry service that once ran from this dock to lower Manhattan.

But by the mid-20th century, the area’s industrial legacy was felt not with the robust economic activity it once knew, but rather the specter of environmental contamination after the area became a site for metal processing and disposal. This unfettered industrial activity eventually led to the surrounding area and creek being declared as a series of designated Superfund sites, environmentally contaminated properties in need of clean up by federal and state agencies.

These issues have made the road to redeveloping the waterfront rocky. RXR reportedly purchased the property for $15 million, despite concerns over the conditions. And, after more than 20 years of remediation and $120 million of investment from New York State and the EPA, the toxic sites have been essentially cleared, allowing for the redevelopment to begin. The city’s planning board approved the first phase of the project in November 2014, but it was not without concern. According to Newsday, 105 residents from the Village of Sea Cliff, Glen Cove and other nearby communities filed a series of lawsuits against both the city and RXR Realty. These unsuccessful lawsuits were dismissed in August 2016.

With the project’s environmental issues remediated and permits in place, Spinello said the city and the developer can begin attracting young families and empty nesters who want to live in a city with a suburban vibe—returning Glen Cove to its former vibrancy. “The waterfront can help make Glen Cove a destination location,” he said. “I think it’s a once in a lifetime opportunity. It will stimulate the local economy, grow the tax base and attract people.”

The project intends to create the most livable, sustainable Glen Cove community in nearly a century. The first phase includes the construction of the 167-unit Beacon condo complex that will offer one-, two- and three-bedroom residences ranging from 906 to 2,056 square feet. All units will offer spacious and modern layouts, with ceiling heights ranging from 10 to 14 feet. Residents will have access to a variety of outdoor spaces, including rooftop terraces at the penthouse level, courtyard terraces at the ground level and outdoor balconies for nearly every unit in the building. The Beacon will also boast an outdoor pool, fitness center yoga studio, lounge and screening room. 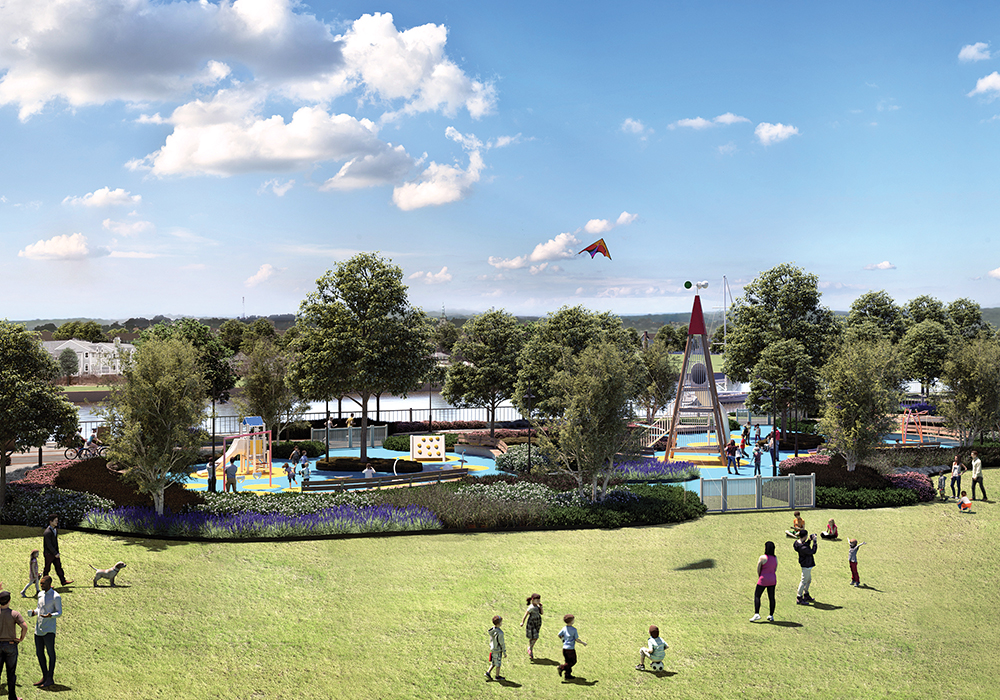 Nearly 28 acres of the 56-acre mixed- use development project is being designated as public park space, which will include a new amphitheater among other attractions.

The 385-unity Harbor Landing complex, also a part of phase one construction, will offer a mix of studios, one- and two-bedroom apartments ranging from 500 to 1,300 square feet. Harbor Landing will be fully outfitted with a fitness center, private dining room and other extras for residents to enjoy. In total, the mixed-use development will create 1,100 LEED-certified units.

Residents will not be the only ones with access to the revitalized waterfront. Public spaces will comprise about half of Garvies Point and connect the property to the Garvies Point Preserve and downtown Glen Cove. In addition to the playground, dog park and new amphitheater, the project will include a 120-slip marina as well as kayak and stand-up paddleboard launches. It’s also poised to be a destination for shopping and dining with roughly 75,000 square feet of the property dedicated to commercial use. RXR projects the retail center will contribute roughly $24 million annually in local spending by new residents. Another major draw—a nod to Glen Cove’s heyday and a welcomed amenity to commuters—will be convenient access to Glen Cove’s Ferry Terminal and a future commuter ferry to New York City.

“We’ve already seen a lot of interest in condos and apartments, which will begin selling in early spring 2017,” Joe Graziose, senior vice president at RXR Realty told Pulse. In total, RXR projects Garvies Point will generate hundreds of millions of dollars in economic activity, including an estimated $622 million in new revenue for the city, school district, library district and Nassau County. The developer approximates more than 460 direct and indirect construction jobs will be created during the construction period and more than 540 permanent jobs will be established in the community when the work is completed in 2022.