Once upon a time, Tom Fabbri was lost. His 20s were a decade marred by drug and alcohol use, jail, bankruptcy and time spent living in his car. But rock bottom provided Fabbri the perfect perspective, one that pointed him in the direction he’s been moving ever since: up. While working a minimum wage job at an airport, he began taking flying lessons and soon became an airline pilot. The fitness enthusiast also became intrigued by his colleague’s attainment of altitude in another way: mountaineering trips.

Upon his suggestion, Fabbri traveled from his Port Jefferson home to Washington to scale Mount Rainier and was immediately hooked. Over the past several years, he has climbed six of the seven summits (the highest peaks on each of the seven continents) including Antarctica’s Vinson Massif this past December. During this time, Fabbri has also written two books, graduated culinary school and become a sought-after inspirational speaker. He shared some insights into his epic adventures, the best travel tips and how you too can scale any mountain (real or metaphorical).

How did you get into this adventurous lifestyle?

I used to do some contract helicopter flying and one of the guys I was flying with went to Mexico and climbed some of the volcanoes. I was always into natural bodybuilding, staying in shape and all of that and I was like, “How can I get to try that?” And he said, “Go to Mount Rainier up in Seattle.” Mount Rainier [is] 14,410 feet. It’s not the highest in the U.S. but you can go out there and do a three-day climb with a couple of people and a guide.

How did that first climb influence you?

I thought I was in good shape…the whole three-day experience kicked my ass. I was beat up, I was cold, I didn’t know the gear and everything I was using, the altitude, the teamwork that is required. I started looking into alpine climbing and I came across an article about the seven summits—the highest peak on each of the seven continents.

I started doing some research and booked a trip to Kilimanjaro, my first. Then I went to Russia and climbed Mount Elbrus—in the Caucasus Mountains between the Black Sea and the Caspian Sea. Then I went to Australia to do Kosciuszko and then Argentina to do Aconcagua. Then I did McKinley—that was number five. Each time I did one of those I had a great experience. I was getting in the best shape of my life. Not just looking good in the gym kind of thing, but as I started going higher and higher with these mountains, it was more and more of a mental challenge. The physical only gets you so far. What it did for me, besides the personal growth, was that people started following me, buying my books, wanting me to speak—it has opened up all these avenues for me.

Vinson Massif was your sixth of the seven summits. What was the preparation like?

Brutal, to put it mildly. I’ve been traveling around the world attempting to do the adventure grand slam: climbing the seven summits and then skiing the North and South Pole. I’m looking to be the 12th American to do that. There’s been 42 or 43 people in the world that have done that. I’ve done some tough climbs. This one, the logistics of it are difficult. Just getting to Antarctica is a challenge. There are no scheduled flights. You have to take a Russian cargo jet from Chile and there are no real runways down there. They land on a blue ice runway.

And when you did finally get there?

I’ve been to [22,800-ft.] Aconcagua in Argentina, the highest peak in the Western hemisphere, and this mountain is just over 16,000 feet. I thought, “Okay, it won’t be bad.” But the weather was brutal—on average about minus 26 degrees Fahrenheit. On Dec 4, at 9,200 feet, we got caught in a storm, between 80 and 90-mph winds. That’s hurricane force winds. We weren’t expecting that at all. It destroyed the camp. I don’t even know what the wind chill was…The challenges on this one were a lot more than I expected: the winds, the cold temperatures—you’re cold all the time—and then pulling a 60 pound sled and a 60-70 pound backpack uphill…But that was the second challenge. The first challenge was when I got there—I was emotionally overtaken. This was a big trip for me, number six of the seven. Then I just have Everest to do. Now the dream is real because when you start something big you’re like, “Okay, I’ll start it, hopefully I’ll finish it.” But now it’s here.

Was it your most challenging climb?

I think so. You have good days and bad days. It kind of ebbs and flows. I definitely had some bad days. Because I had been on these other big mountains I made the assumption that because it’s a smaller mountain, it would be an easier challenge for me, but it wasn’t. It turned out to be probably harder than McKinley, which is technical. [McKinley] is a bigger mountain than Everest from where it starts at the base and it’s up by the Arctic Circle, so the weather there is more brutal actually than Everest. I thought if I could do that, I can do this. But that was the wrong assumption. Not that I was lackadaisical about it because I trained for a whole year, but my approach to it should have been more serious. I certainly had my doubts when I was there.

It’s the compilation of lots of hard work—extremely hard work—and overcoming your fears. And then you can’t really believe you’re there. It is that sort of Olympic moment: years of training and then here you are but it’s only for a minute. You really have to enjoy all the pain. That’s the way I get through it. You have good days and bad days, I think mostly they’re bad days…I cry at the top. I’m like a baby, I just can’t believe it. I’m at the top of the bottom of the world. 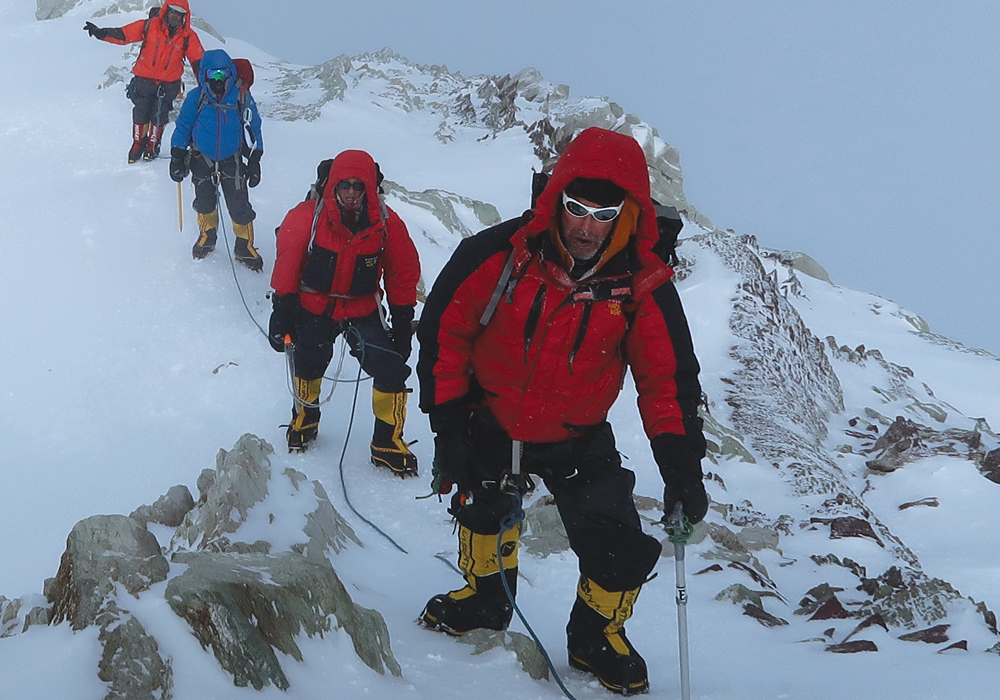 Mental, physical, emotional, spiritual. I spent a whole year doing the physical training: running stairs, backpacks, using an elevation mask, in the gym. But I take the climbing seriously because it really pushes me out of my comfort zone. I’m afraid of heights and I have a fear of falling. But if you want to grow as a person, you have to overcome your fears. The physical training for me, that’s the easy part. The mental training, I’ve learned to use visualization—I visualize myself being successful. If you’re not emotional about your life, what are you doing? Most people I see are very unhappy with their lives because they don’t love themselves, they don’t take their life seriously. If I’m not doing the things I love, I won’t do them. I love speaking, writing, pushing myself. I love climbing, I love flying helicopters and jets. I just do things that I love.

What is your key to success?

To be the best at what you do, those four things come into play. That’s what separates successful people. The ones who are willing to do what others are not willing to do. If you believe you’re going to do something, you’re going to do it. That’s a simple philosophy. I believe that I can do these things, whether I’m successful or not. We all have mountains to climb whether it’s becoming a writer or a successful businessman or creating a great family. But it’s not the summit, it’s actually the journey and how you grow. The training is probably the best part about it because that’s when I grow the most. Then there’s the test at the end.

Did you always want to write books and become a speaker, or was it a natural progression?

The thoughts were there…I saw sort of a bigger picture for myself. I used to be in trouble all the time and was in and out of jail. I had been homeless, bankrupt, all those things and aviation and physical fitness saved my life and gave me a path to a better life. I went on to have a great career at the airline—flying helicopters, becoming an airline captain. I thought if I could do that, I could do other things. I started taking physical fitness to another level and I thought I’d love to write a book, but I don’t know how to write a book. I didn’t go to college. I hired a ghostwriter, we collaborated, I gave him all my notes about my philosophy and how to live a healthy life. We wrote the first book Ageless You and that started opening doors—speaking events, more books, more adventures—all these things are coming together.

Why has adventure travel become so popular?

People are looking for other distractions. We’re over-medicated, we have soft addictions: too much TV, smoking, food is readily available—people are super overweight. People are really unhappy. Suicide rates are through the roof. As people start aging, and even younger millennials, they are looking for a different distraction. They’re looking for adventure in their life because a lot of people feel they are trapped in a job they [have] to do. Adventure travel is more readily available, it’s a good thing.

Do you have advice for people just starting out?

Do the research, find an expert, start asking questions. I have seen people get killed. They’ll say, “I want to climb Everest, that would be great, right?” And they’ll hire a guide and typically go cheap on that. They’ll have someone drag them up and drag them down and they end up being killed. I think people getting out of their comfort zone with adventure—mountain climbing, rock climbing, travel in general—is a good thing. Travel is one of the best educations you can ever get. I met some unbelievably fabulous people. Some of the wealthiest people in the world, some of the poorest people in the world…the adventures are one thing, but the people make the adventure. When I went to Kilimanjaro we had some porters with us from the Swahili tribe and they earned $3 a day and they were the happiest people I’ve ever met. And here we are over here and we’re so unhappy. We have everything we could ever want, every opportunity and we don’t know what we’re doing.

What have you learned during these trips?

You can do anything; and you should be doing something. When you find your purpose you’ll find your passion. My purpose is to inspire others to live their dream life. It took me a long time. A lot of people are unhappy because they are not living the life they are meant to live, they are living someone else’s life. They are living by what their parents and society said we can and we can’t do. I think that is all a bunch of crap. I used to listen to what everyone else was telling me. That is why I ended up living in my car until I found the guts to follow my dreams and sort of say “F-you” to society. If you do it with love, respect and integrity, you’ll be fine. If you’re chasing the money, you’re chasing the wrong thing. Because I found my purpose, I am passionate and I have more work than I know what to do with. But I am happy. I am inspiring others. And that is my message. I believe we’re meant to live a bigger life.

Everest. That’s really a special climb. We just have to figure out logistics on what we want to do next. Probably the North Pole and then go back to the South Pole and go to Everest…It’s a big commitment, but you only live once.