Between being injured in the 1906 San Francisco earthquake and nearly dying in the 1918 Spanish Flu pandemic, Ansel Adams had an epiphany when his father bought him a Kodak Brownie box camera and took him to Yosemite. “One wonder after another descended upon us,” he wrote. “There was light everywhere…A new era began for me.” Luckily, that era of environmental awareness coupled with an impeccable artist’s eye lasted the rest of  his life.

Ansel Adams: Sight & Feeling at the Nassau County Museum of Art presents 22 masterpieces from the collection of the Kalamazoo Institute of Arts. It’s joined by two complementary exhibitions. Light Works: 100 Years of Photos includes some three dozen iconic images like Dorothea Lange’s “Migrant Mother” and Henri Cartier-Bresson’s “Behind Gare St. Lazare.” It’s a best-of-the-best glimpse at a century of photography, leading to the upstairs galleries where New Photos: Long Island Collects exhibits works created from the 1960s through present day that change and challenge the medium while building on the past. This is the first time the museum has filled all its galleries with photography; it’s designed to give a sense of beginnings, of greatness and of continuity. 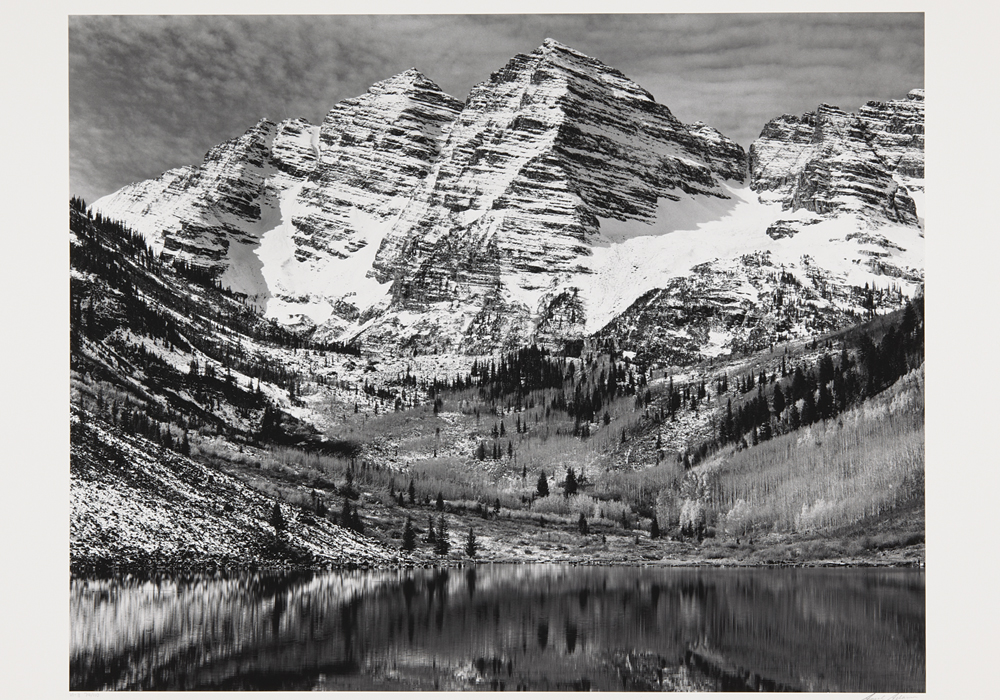 “It’s hard for us to imagine what the world would have been like before you had the photographic image because it so populates our world and determines, literally, the way we view existence,” said museum director Dr. Karl Emil Willers. “We’re extremely pleased with the way [the three exhibitions] talk to each other, the way they show differences in different photographic eras but also great similarities.”

Beginning the trio with Adams, one of the best-known photographers in history, gave the museum the chance to seduce the eye while opening the discussion on the still image. Art and nature lovers, aesthetes, curators, mountain climbers, environmentalists…anyone who responds to profound beauty will find an echo in the soaring mountaintops, crashing waves or graceful tracery of veins in a leaf that Adams captured in silky, lush blacks, crisp whites and infinite nuances of gray. 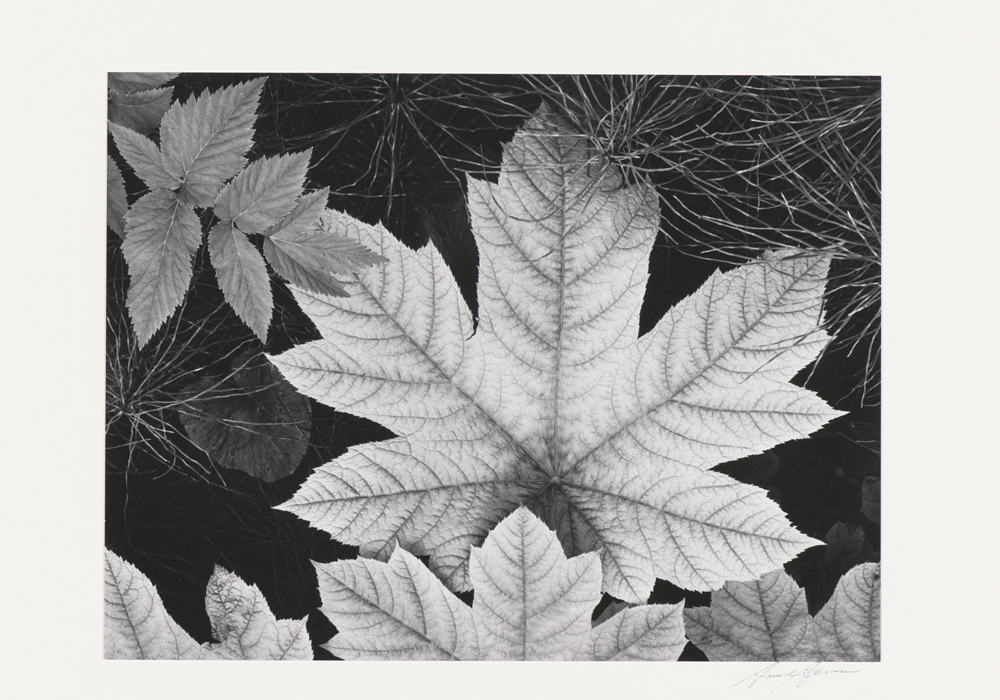 Yet his work, and the medium of photography itself, had to struggle to be considered art, worthy to hang alongside paintings on museum walls. “Adams was dedicated to the cause of pushing museums and art schools to establish photography departments,” explained Karla Niehus, the KIA curator who organized the exhibit. “Early on, Adams was allied with the ‘pictorialist’ photographers who demonstrated that cameras and darkroom techniques, just like brush and paint, could produce images conveying the appearance and subjective impression of a scene. Later, he shifted toward the philosophy of straight photography but still with a deep technical understanding of [reproducing]…the natural wonders before him.”

The gorgeous output from his lens eradicates any question of worthiness. Willers pointed to a “mesmerizing” 1963 print, “Dunes, Oceano, California.” “This piece is sort of an overall whiteness with these extraordinarily crisp, shadowy effects from just the ripples of the sand caused by wind currents that are blowing the sand very much like water would be blown,” he said. “It’s one of the smaller prints in the exhibition which makes it all the more interesting because it seems monumental. You almost feel that you can see the individual grains of sand in this vast desert landscape.” Adams’ composition offsets sharp angles with sensuous, undulating lines defined by velvety black, snow white and countless delicate in-betweens. 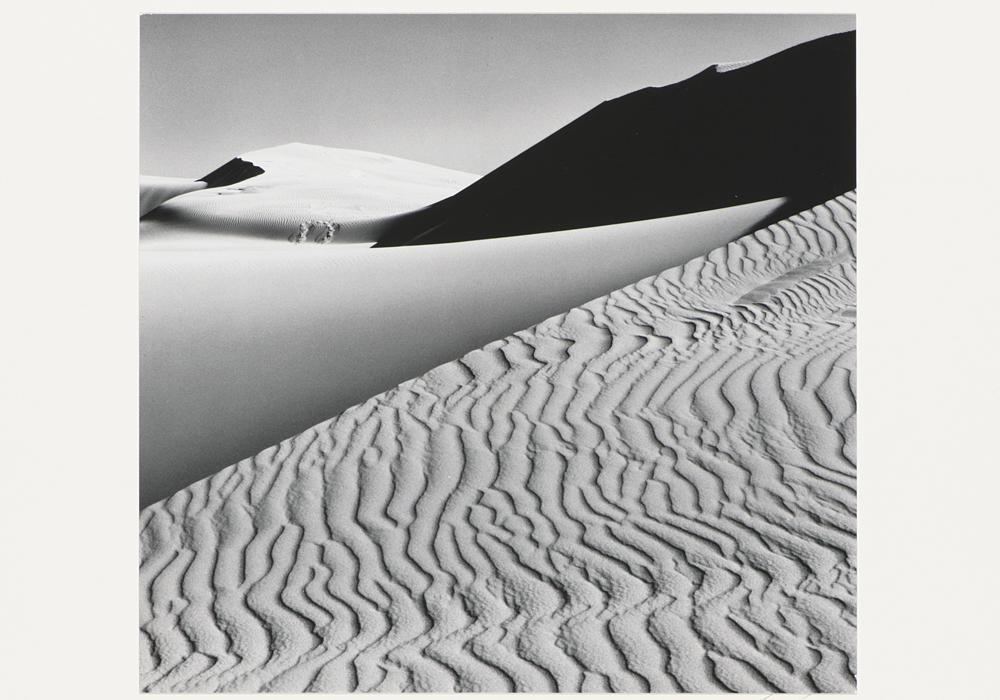 On an adjacent wall hang two images in a side-by-side arrangement designed by Willers and his team. “Antelope House Ruin, Canyon de Chelly National Monument, Arizona” is, as Willers said, “almost an abstraction in the sense that it’s a flat cliff face with one of the pueblo structures at the base sort of tucked under this cliff. But much of the photograph is just this solid cliff wall without any hint of sky, and the texture of the rock just comes through so vividly.”

Next to it is “Orchard, Early Spring, Near Stanford University, California.” Blossoming trees appear flat against the dark earth, forming patterns recalling everything from Jackson Pollock’s works to Japanese woodblock prints to Navajo weavings. Beyond the visual elements, the trees are heartbreakingly delicate, reminding the viewer of the fragility of life and the power of hope.

“The breathtaking majesty of raw nature as communicated through Adams’ work will remain undiminished for generations to come,” Niehus stated. “The imperative to preserve our environment—and the very sustainability of our planet in the face of the human population’s demand on natural resources—is certainly no less today than in Adams’ time.” 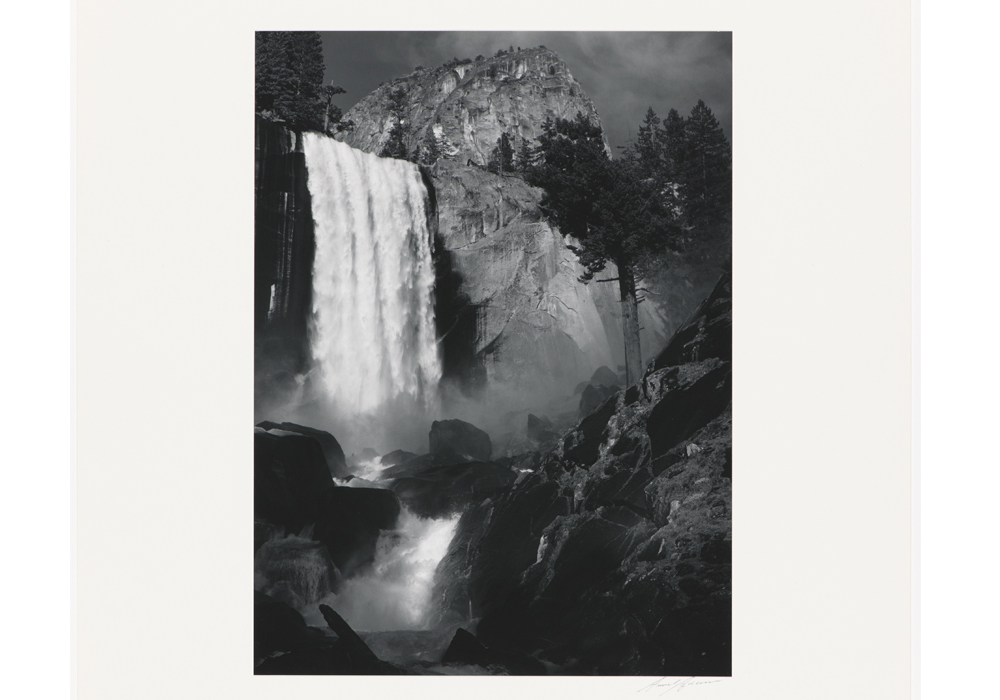 In the related exhibition New Photos, many of the same themes prevail. A stunning image of an iceberg by Brazilian artist Sebastião Salgado, along with complex, thought-provoking works by artists including Cindy Sherman, Robert Mapplethorpe and Matthew Barney, deal with themes of global resources, identity, politics and human rights. They affirm art’s role in bringing both the seen and unseen into sharp focus, circling back to Ansel Adams’ meaningful photographs.

Adams’ influence is difficult to overstate. It’s hard to imagine our responses to our national parks had Adams not made arduous treks to capture nature sometimes better than our first-hand experiences might allow. It’s gladdening to think that the environmental activist artist who once wrote, “starry-eyed reaction to the splendors of nature is an invaluable experience for everyone,” will have a lasting presence in the landscape he loved.