Most people perceive Singapore as a place where bankers grow ever richer and skyscrapers ever taller. While financial districts are the lifeblood of their cities, they are rarely the hearts. Just as it is unlikely for a leisure traveler to confine a New York City visit to Wall Street or time in Paris to La Défense, beyond the concrete symbols of wealth is another Singapore—a country discovering that quality of life can be evaluated by more than professional success.

Like Dubai, Monaco, Vatican City and Hong Kong, Singapore is a city whose center and surrounding areas form an independent political entity. Also similar to these other city-states is a vast concentration of wealth and cultural diversity in a small area. What other country in the world has four official languages (Chinese, Malay, Tamil and English)? Switzerland does, and it’s not that far of a stretch to consider Singapore the Switzerland of Asia, considering its degree of organization, cleanliness and precision schedules. Singapore’s next-generation public transportation system, immaculate and speedy, is a marvel that puts many commuter lines in the so-called developed world to shame. Almost everyone takes the train at a fraction of the price of the New York subway.

This is the ultimate multicultural society. As home to a variety of religions and cultures, Singapore sees many colorful events and festivals that draw revelers throughout the year. From Chinese New Year and the Mid-Autumn Festival (when delectable mooncakes are offered as gifts), to the Diwali Festival of Light and European Christmas, there is no shortage of celebrations. These culture merriments are not limited to holidays. There is Arab Street, where hookah pipes accompany afternoon card games on the sidewalk. And Little India provides glimpses of the subcontinent’s fascinating cultural practices and delicious cuisines. In the city center, there are libraries, museums and exhibits highlighting the history of all of the country’s ethnicities with the same enthusiasm. 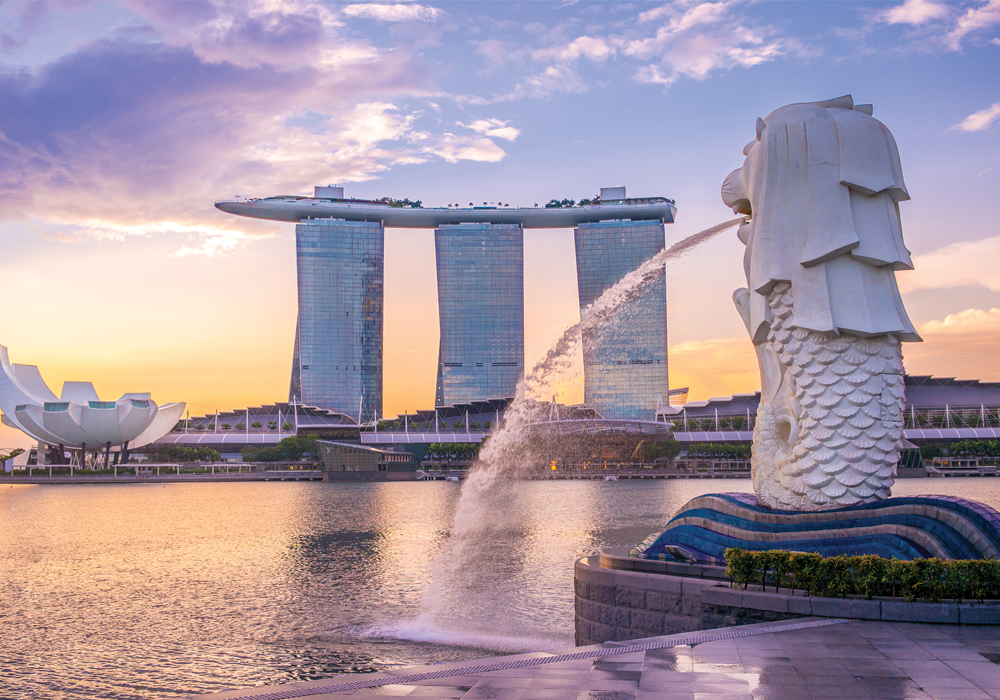 The iconic half- sh, half-lion Merlion Statue attracts thousands to the park named after it.

The beautiful Asian Civilisations Museum located amid the foliage of Esplanade Park is part of an impressive concentration of attractions that include The National Gallery, The Arts House and the Victoria Theatre & Concert Hall. The Civilisations Museum’s striking displays present the diverse peoples of Asia—and of Singapore as its microcosm. In a separate, but no less immaculately preserved building, the Peranakan Museum showcases the unique culture of Singapore’s Straits Chinese and other ethnic groups that immigrated, inter-married with locals and formed the basis of an enthralling subculture in Singapore.

In countries with immigrant Chinese communities it is common to see the headquarters of clan associations, groups of Chinese who share and preserve their ethnic origins in a foreign land. One of the most impressive structures in Chinatown is the Kong Chow Wui Koon, the clan house of the Xinhui from China’s Guangdong province. Now a beautiful cultural center with many activities and events welcoming visitors, the unique Sino-British colonial building on New Bridge Road is well worth a visit. Around the corner on Cantonment Road is a series of renovated shophouses home to a variety of eclectic businesses and organizations. 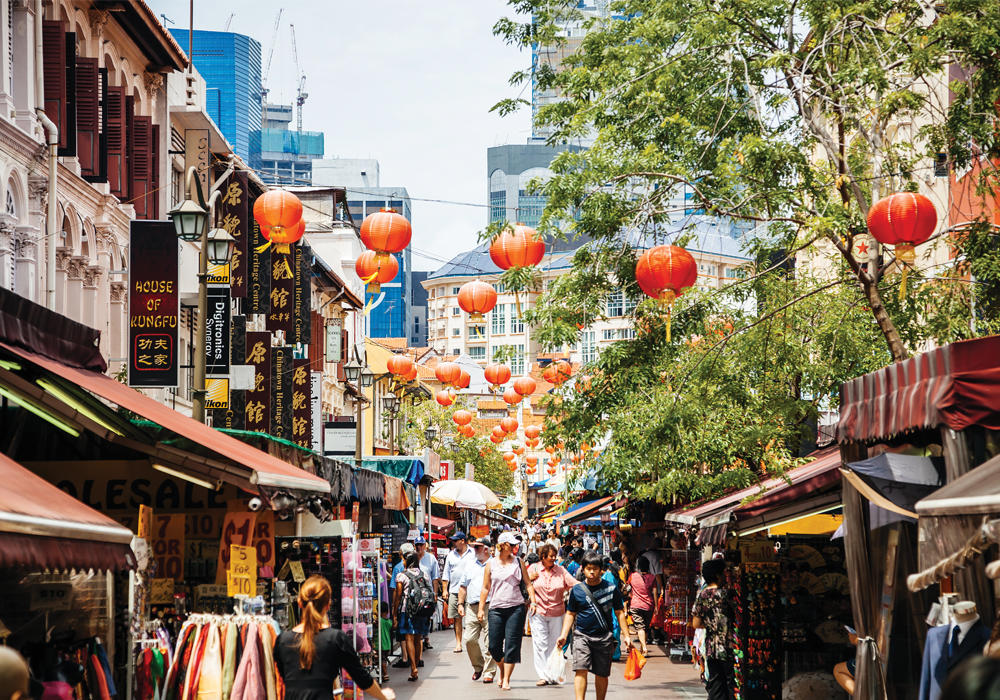 Singapore’s Chinatown is comprised of five districts, each a destination for retail, culture and tasty fare.

One common denominator of all these cultures is a deep love of food, which has made Singapore a dream destination for travelers craving to sample a different Asian cuisine every night of their vacation. Reverence for spirits, bottled and ancestral, is very important in Asian cultures. After decades of benevolent authoritarian rule, which guided the country to undeniable prosperity, Singaporeans are discovering that succeeding in business and having fun are not mutually exclusive. No area of Singapore showcases the city’s zest for leisure more than Clarke Quay. The former shipping canal was transformed years ago into a restaurant and bar hotspot for western expatriates and hardworking locals thirsting for some fun after a day at the office. Singaporean expertise in revitalization projects has more recently been applied to the city’s Chinatown district, which has been reborn as a vibrant neighborhood where local shops and restaurants serving the resident populace are mixed with chic art galleries, company offices and personal fitness centers. While Chinatown is certainly popular with visitors from other countries, it’s no tourist trap. It is a window into a contemporary Asian society preserving its past while embracing the future. That, in essence, is the spirit of Singapore.

When it’s time to retreat, head to Chinatown’s first boutique hotel, the stylish Hotel 1929, credited with bringing attention to Singapore’s architectural patrimony when it opened its doors in 2005. More than 10 years later, Hotel 1929 is a favorite for millennial travelers looking for good value and high style. The hotel’s streamlined simplicity retains its popularity among returning guests who avidly appreciate the cozy rooms, fancy décor and convenient location. As a more genteel set of travelers began to make for the area, Unlisted Collection, parent of Hotel 1929, opened a second, more audaciously luxurious accommodation. New Majestic, blocks from Hotel 1929, is located on a street full of traditional shophouses restored to mint condition. The repurposed building is an adventure in architecture: the raw concrete of the ground floor lobby reminds guests of the state of the building before ascending to meet extraordinary accommodations designed by artists. Fourth floor rooms have balconies and smart layouts to make the most of the lodging. 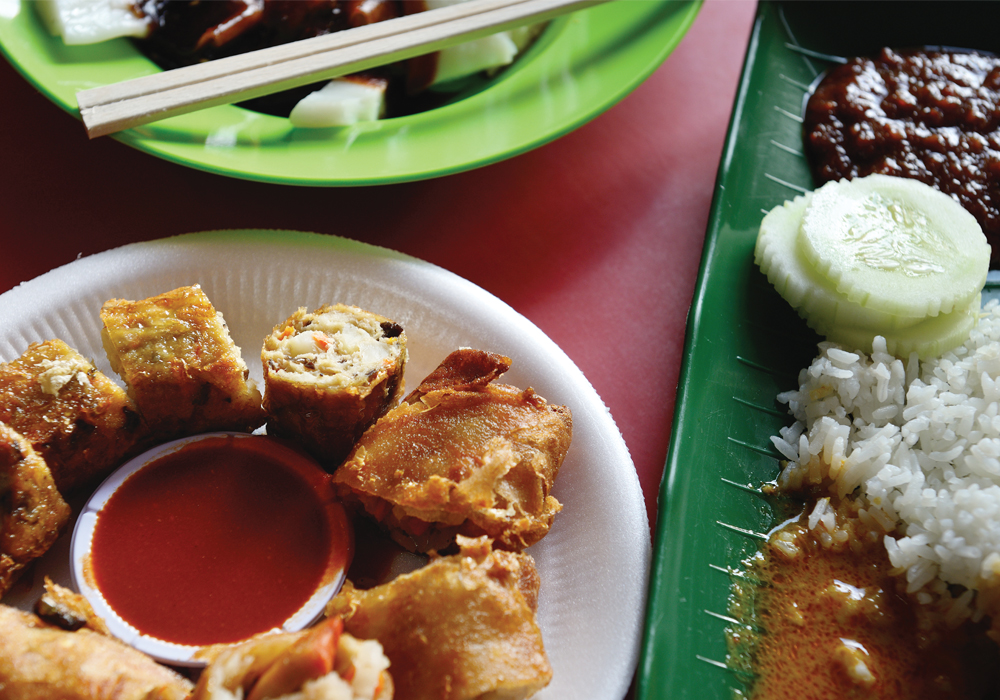 Singapore’s diversity makes it a destination offering a variety of cuisines.

In contrast to the renovated chic of Chinatown is the queen of Singapore’s hotel scene, where colonial-era grandeur never went out of style. Raffles has been the most coveted address in Singapore for more than a century. For good reason the hotel is spectacular and is about to become even more so. Visitors seeking traditional European-style accommodations in the center of the city find Raffles to be the last word in hotel excellence. Even basic rooms are enormous, but the historic suites named after famous authors such as W. Somerset Maugham and Sir Noël Coward are imbued with the same special sense of importance found in the understated luxury of the hotel’s public areas. The haves see no need to flaunt their wealth when it is already conveyed in the very fact that they are staying at Raffles. In contrast, the sublime restaurants are only too eager to show off their exceptional cuisine. The traditional afternoon tea sees people lining up for a table, but waiting in line will do no good to gain entrance to the ultra-exclusive Raffles Grill, a dining room for in-house guests only, where the food and service are both superb. Beginning this month, Raffles is undertaking an extended renovation program of its city block-sized property to make it even more impressive.

Some guests may wonder why Raffles is located on Beach Road when the coastline is blocks away. This was not always the case. Raffles was once a beachfront hotel, but land reclamation projects over the ensuing decades have created many acres of valuable land in one of the priciest real estate markets in the world. Most visitors to Singapore make a beeline to Orchard Road, one of Asia’s most luxurious shopping boulevards. Rivaling Fifth Avenue, it is where boutiques of the world’s most distinguished luxury brands blossom like retail flowers in a tropical garden of commerce. 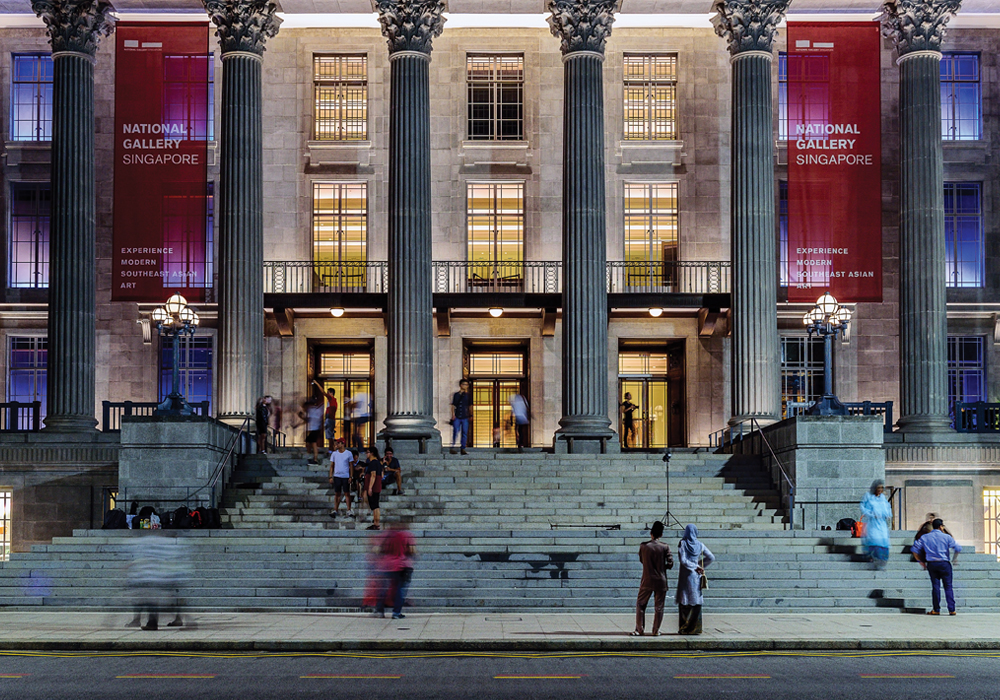 Amidst the arts, food, haute hotels and shopping are a bevy of tranquil gardens of all types. Making good use of the equatorial climate, Singaporeans like their greenery. It is easy to raise flowers and assorted exotic plants in the consistent heat and humidity of Southeast Asia and the locals go about beautifying their environment with aplomb. Singapore Botanic Gardens, one of only three gardens in the world classified as a UNESCO World Heritage Site, are worth a visit even by dedicated pavement pounders. The Gardens are open from 5am to midnight to allow locals to visit before and after work. Within the Gardens is the National Orchid Garden, which attracts orchid enthusiasts and scientists eager to see the more than 1,000 species on display.

Getting to the city-state is an adventure all its own. There is no short route to Singapore, but at least flights can be enjoyed in maximal comfort on board Lufthansa, which offers service from New York to Singapore via Frankfurt. Travelers wanting VIP treatment on arrival or departure at Singapore’s Changi Airport can pass through the private JetQuay terminal, which provides a serene sanctuary in the form of a (very) private lounge with its own immigration desk for arrival and departure procedures. The airy space is enhanced by stylish décor and services such as private VAT sales tax refunds on purchases and concierge accommodations for other needs. An even more private suite within the JetQuay terminal used by visiting dignitaries, sports stars and others preferring discretion can be booked upon request.