Wine tends to be the Big Cheese of beverages to pair with fromage. But guests at C’est Cheese, a popular eatery in Port Jefferson which recently expanded to include a craft beer store, are discovering one of the more underrated foodie couples: beer and cheese.

“There are more combinations of beers that can pair well with cheeses because the beers are so wide-ranging,” said Joseph Ciardullo, who opened Craft at C’est Cheese with Chris Roche last year. “Wines get typecasted to 6, 8, 10 varietals that everyone knows about. Beers can go all over the place. There are so many different varieties of yeast, malts and hops that the flavors can be exponentially controlled to produce a wide range of whatever the brewer is going for.”

Roche and Ciardullo told their backstory and provided a few of their favorite pairings in the February issue of Pulse. Since our readers ate and drank it all up, I hopped over to Craft at C’est Cheese for a few more must-tries. 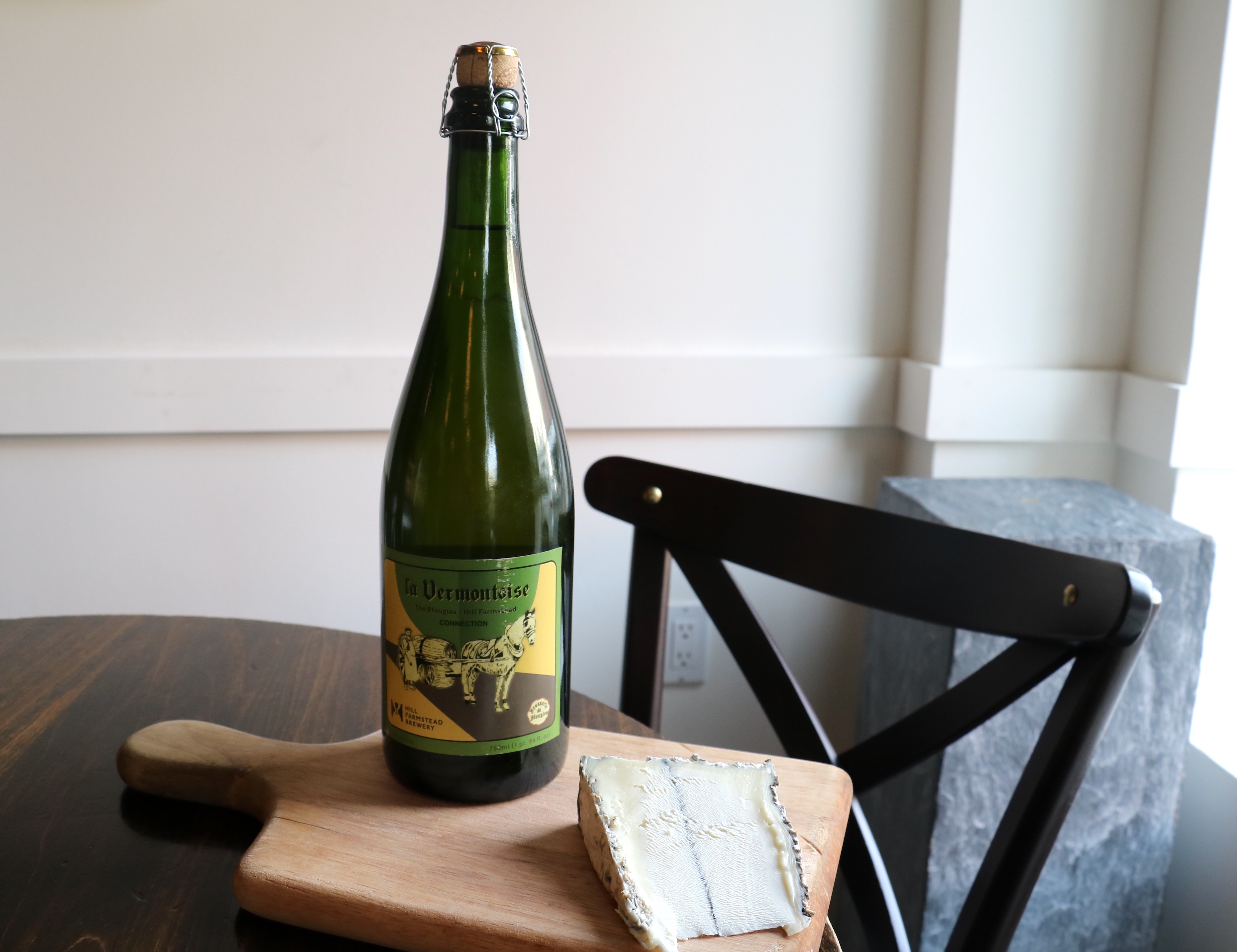 Beer: Brasserie de Blaugies / Hill Farmstead Brewery La Vermontoise
Cheese: Cypress Grove Humboldt Fog
The La Vermontoise is fruit and spice and everything nice. Imbibers taste notes of pear, lemon and earthy flavors and get a spicy finish. Ciardullo suggested pairing it with the Humboldt Fog. The cheese, produced by Cypress Grove which helped start the artisanal cheese movement two decades ago, is a “soft, ripened cheese” that compliments the beer’s profile. 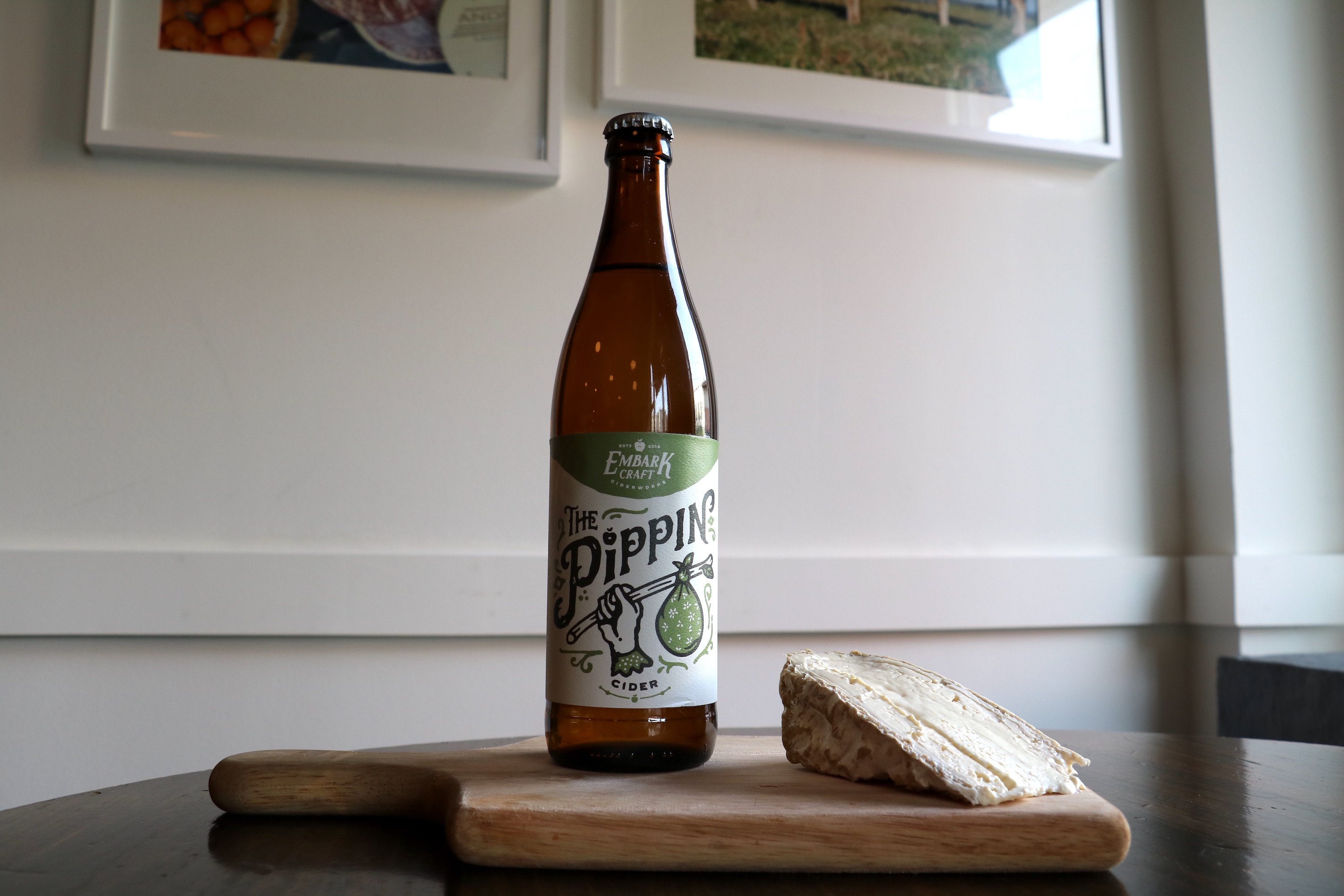 Cider: Embark Craft Ciderworks The Pippin
Cheese: Delice de Bourgogne
Ciardullo threw in a wildcard by choosing a dry, crisp cider instead of a beer to pair with the Delice de Bourgogne, a decadent cheese from the Bourgogne region of France. “It’s basically cheese butter. That will really cut the fat of the cheese and tartness of the cider.” 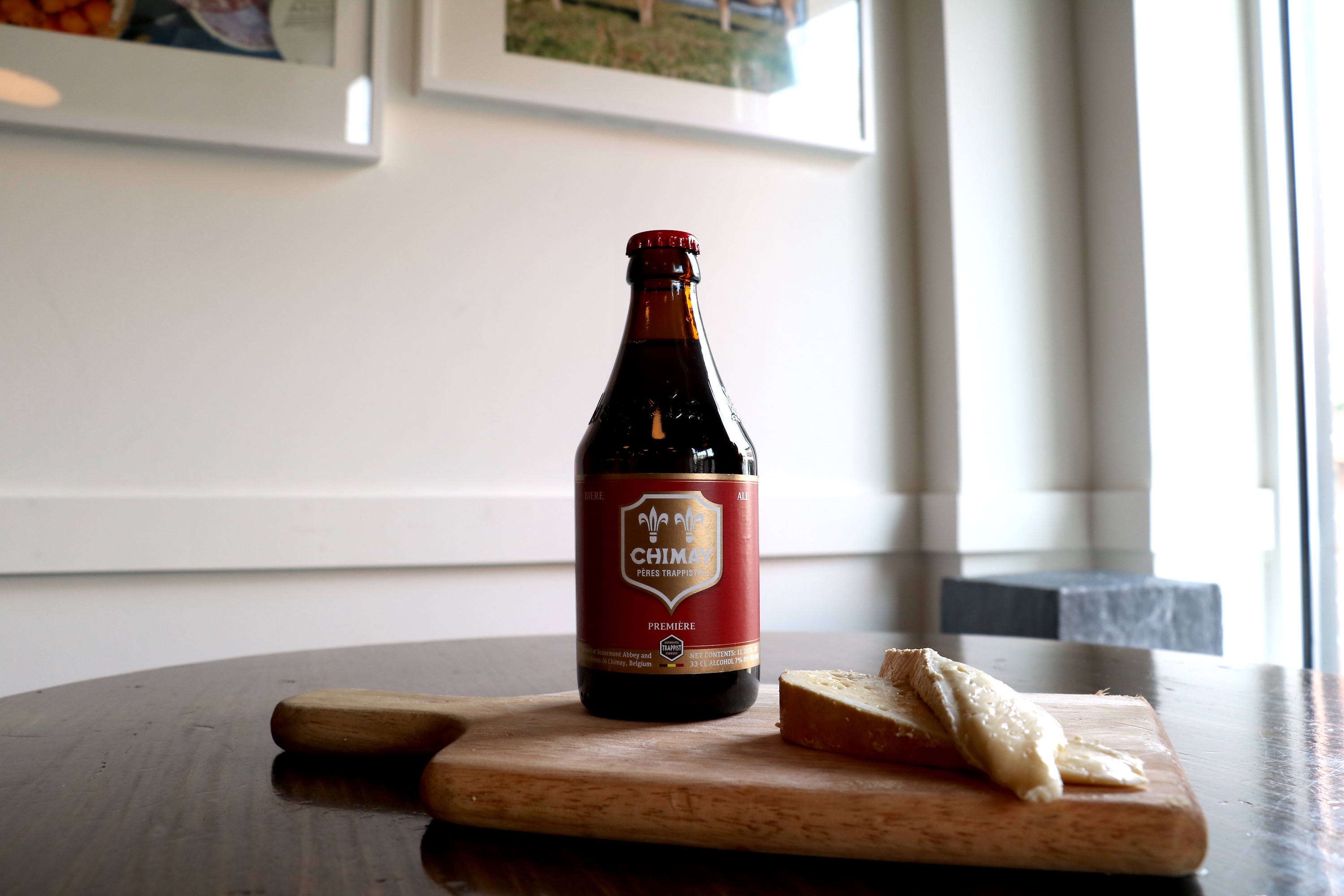 Beer: Chimay Rogue
Cheese: Von Trapp Creamery Oma
Chimay has been on tap at C’est Cheese since the beginning. The Peres Trappistes, which is made by Belgian monks, falls in the fruity and spicy category. “It’s got a malt flavor that’s not overpowering.” Though not overpowering, there’s still a ton of flavor, meaning it’s essential to pair it with a cheese that follows suit. “I didn’t pick a cheese washed in beer [which Belgian monks typically do] but I did pick a wash rind cheese called Oma from the Von Trapp family.” (Yes, as in the Von Trapps from Sound of Music.) Like beer, washing the rind of the cheese as it matures ensures it stays soft and helps it develop flavor (and that stinky-cheese smell). “The wash balances the flavors of the beer–so it balances both the cheese and the beer. That’s what you’re looking for. A harmonious taste for your palate.” 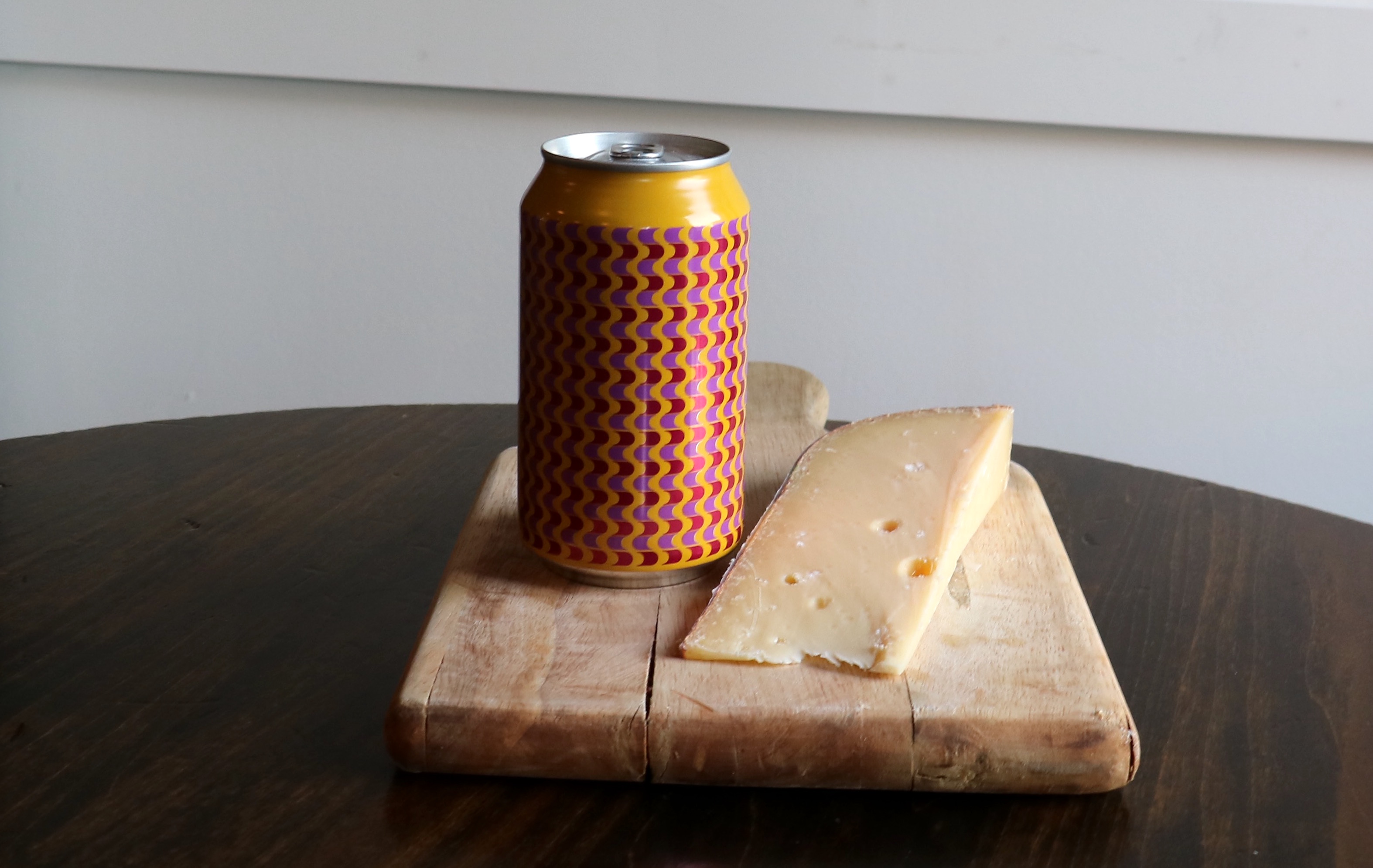 Beer: Stillwater Brewery NuTropic
Cheese: Prima Donna
The Stillwater NuTropic Ciardullo chose has passion fruit and mango flavors, which brewers get from dry-hopping beers with hops like citra. When pairing, Ciardullo decided to stick with the fruity flavors by going with a parmesan-gouda hybrid from Primadonna. “It has the crunch of the parm with the sweetness of gouda. It goes well with a beer that’s got a little bit of alcohol because it’s got some age to it.” 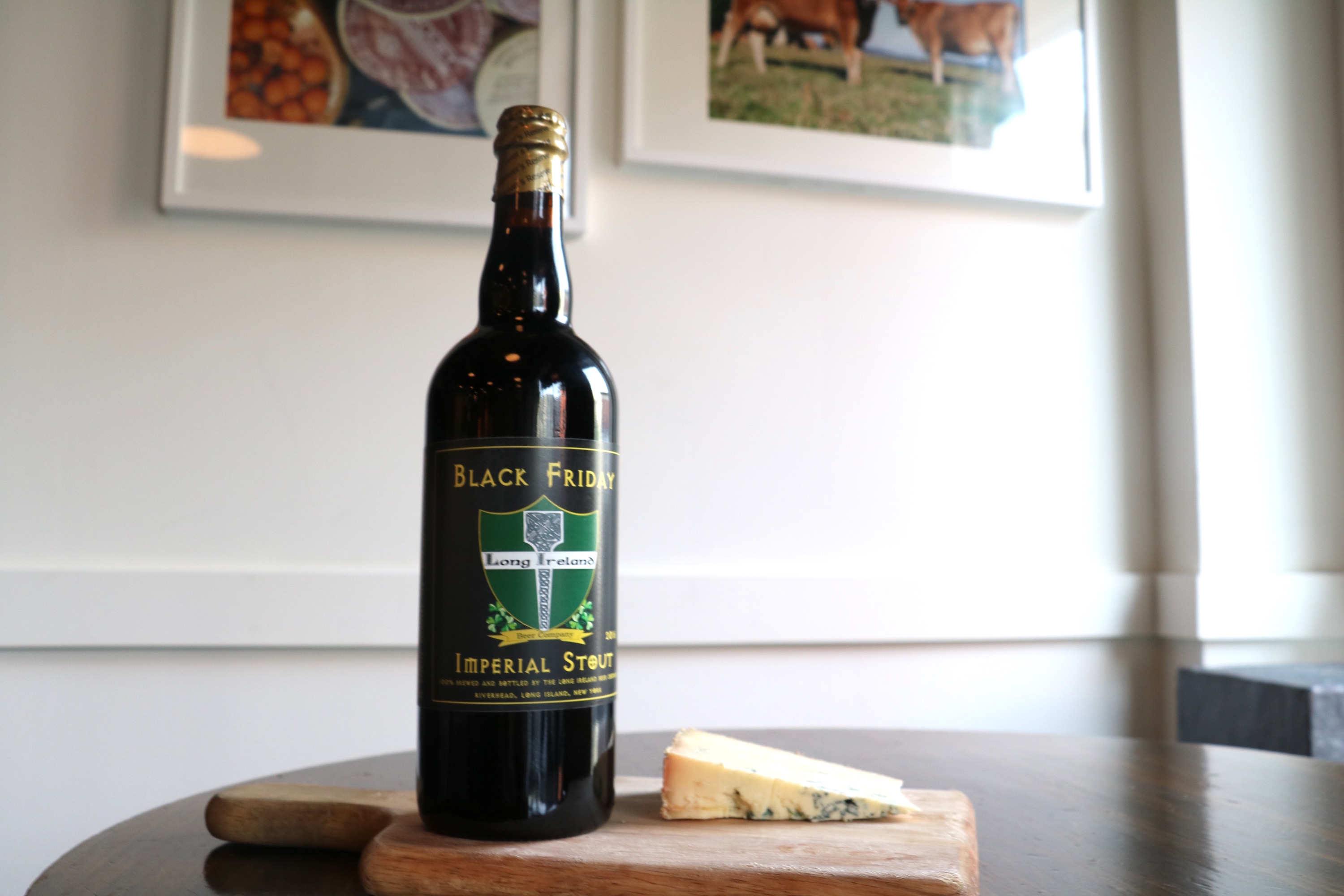 Beer: Long Ireland Black Friday Imperial Stout
Cheese: Stilton
Long Ireland’s Black Friday Imperial Stout has a varietal ABV that tends to fall between 8-9 percent. “You get great flavors of chocolate, coffee and burnt caramel.” In other words, it’s strong, and people need a cheese that can stand up to it. No cheese can hold its own like blue cheese. Ciardullo’s opted for one from Stillton. “It’s made with pasteurized cow milk…and has that great blue, fudge-y-spicy flavor and texture going on. It cuts through the big, bold booziness of the imperial stout.”