Gideon Ariel has been entrenched in the health and fitness world most of his life. A two-time Israeli Olympian in discus and shot put (1960 and 64), Ariel holds patents for many modern gym equipment, including the variable resistance exercising device and the exerciser. But about three years ago, his body betrayed him when his kidneys failed.

A former student gave him his kidney, which got Gideon back on his feet. And Endless Pools, pools that are engineered to allow users to swim against an adjustable current, got him back in the exercise game, a major relief after his doctor told him his medication would limit his workout abilities. Ariel spoke about how his positive attitude and Endless Pools helped him dive head first into recovery. 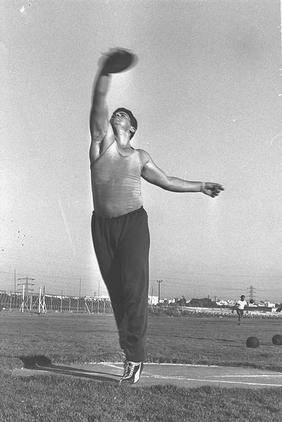 When did you decide you needed a transplant?
When you go on dialysis, you are like the walking dead. Every week you go to the cemetery with lights. They connect you to machines. You are very tired and lose your appetite. It’s like a death sentence. I started looking for kidneys and I had eight friends offer to give me a kidney.

Fitness has been your life for so long. What was it like to receive such a grim diagnosis?
I never drink, I never smoke, I exercised all my life. I never had any problems with blood pressure. No one knows why my kidneys decided to die before me.

What was your mindset like as you waited for a transplant?
You have to fight with what you’ve got. [Because I was] 75, the thoughts are, “Maybe if I wasn’t exercising, eating healthy foods and taking vitamins, maybe the kidney would have gone much earlier. Maybe I’m lucky.” I always tried to look at it in a positive way.

That’s a great attitude but had to be difficult to maintain every day. What kept you positive in the darker moments?
I kept exercising, reading. I kept walking. I was always doing nothing or something. It’s like going through a war, you don’t know if you’re going to come back but you can’t be depressed all the time.

How did your ability to exercise change after the transplant?
I couldn’t do land-based exercise. I was walking instead of running on the treadmill. I like to swim, but the doctor said I couldn’t use a public pool because they give you rejection medication that [weakens] your immune system.

How did you come across Endless Pools?
I started looking on the web. I started looking for a flume [a small swimming pool used at many Olympic training facilities that can generate a current and allow a swimmer to swim in place]. I saw Endless Pools’ video and went to see [them] in San Diego. I saw the pools and how it worked. He was a very good salesman.

What makes them special?
The mechanism that Endless Pools uses [involves] water coming from [hydraulically powered propulsion system]. It’s coming from underneath and pushing you really nicely. The intensity is really high and symmetrical, so it doesn’t push you from one side or to the other side. It also lets you imitate the body bouncing on the ground. It’s the best of its kind.