It’s a question we ask ourselves walking through a dark neighborhood at night. But for some, that question has much deeper roots. It stems from the fear of not knowing what the future holds—a reality for many immigrants living on Long Island today. Yet this diverse group is a positive contributor to Long Island’s economy and way of life.

Elise Damas, an immigration attorney with the Central American Refugee Center (CARECEN), knows about this fear personally and professionally. The redhead Irish-looking Latina worries for her husband, a Honduran who “looks 99 percent indigenous,” and her dark-skinned stepson because she’s noticing a rise in racism since Donald Trump started his presidential campaign. 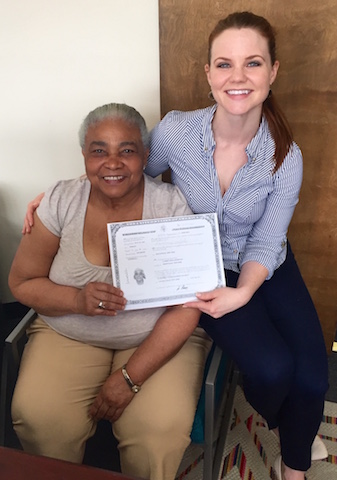 She recalled conversations she’s had with clients whose stories support the belief that there’s been a shift in attitudes towards them as a result of the election. One Latino client noticed a rise in xenophobia from customers in the restaurant where he works. He mentioned people uttering, “Go back to your country; you’re not wanted here.”

Incidents like these make life terrifying for many of the approximately 526,000 immigrants who make up the Nassau and Suffolk population of 2.9 million. But a report by David Dyssegaard Kallick published by the Fiscal Policy Institute in 2010 emphasized the positive economic impact of immigration on Nassau and Suffolk Counties.

“In 2005-07, immigrants made up 16 percent of Long Island residents,” the report read. But they “accounted for 18 percent of local economic output. This gave Long Island an Immigrant Economic Contribution Ratio of 1.10.” The ratio, which shows immigrants were “pulling their weight in the economy,” was bigger than most big cities around the nation, including Los Angeles and Boston. More than half worked in white-collar jobs.

The report also stated immigrants “accounted for about $27 billion of the $151 billion economic output of Long Island (in year 2000 dollars)” between 1990 and 2007. That’s nearly 18 percent of the total for this period.

John Rizzo, Chief Economist at the Long Island Association (a business and civic organization), said, “If there is a meaningful restriction [on immigration], just looking at the numbers on that study, it would definitely have an adverse impact on Long Island’s economy.”

The statement makes sense looking at a 2015 report from the organization, which proved that as the number of Long Island immigrants increased, so did economic output. Immigrants made up 18 percent of the population but generated 20 percent of economic output according to 2013 data, yet again outpacing their output per capita.

Immigrants, Rizzo pointed out, help fill a void created by the aging of Long Island as well. “As people retire or move out of the area, the immigrants tend to be younger so they are replenishing the labor force,” he said.

Additionally, the 2010 report refutes beliefs that immigrants are taking employment away from U.S.-born workers in Nassau and Suffolk, who found jobs at about the same rate in 1990 “when immigration was at a much lower level.”

Rizzo also noted undocumented workers tend to fill jobs that are vital to Long Island’s growth but U.S.-born workers are much less likely to take.

“These are minimum wage jobs or relatively low paying jobs, some of them hard labor type jobs like in agriculture and construction… Especially now, Long Island’s in a situation where we are near full employment. It’s not like there’s this huge pool of workers out there without jobs.” (The unemployment rate in Nassau and Suffolk was 3.9 percent in December 2016, according to the Department of Labor).

Yet there’s worry of anti-immigrant sentiments growing in the community. Maryann Slutsky, the executive director of Long Island Wins, an organization focusing on immigration issues, backs up the claim that hate incidents on Long Island have spiked. Wins, which is in the process of collecting numbers, compiles information from the community and its advocates. The NYPD confirmed there were 380 hate crimes in 2016, a leap from 309 the year before. Anti-Semitic attacks jumped from 126 to 140 while Muslim attacks increased from 23 to 34. The Southern Poverty Law Center (an Alabama-based legal advocacy organization founded in 1971) began tracking hate crimes nationwide the day after the election until Dec. 12. It found anti-immigrant actions were the most frequent, making up 315 out of more than 1,000 bias-related events in the report.

Many, including Slutsky and Damas, blame the increases on Trump’s rhetoric throughout his campaign.

“If you have that hidden racism within you, it’s now been emboldened. We have now been told that that’s OK,” said Damas. Trump’s election, she said, sends the message that holding hateful feelings isn’t an obstacle to becoming “the most powerful man in the free world.”

On his way to winning the election, Trump hosted a rally at the Emporium in Patchogue last April. Blocks away, Joselo Lucero fought back tears as he spoke to dozens of protesters at the Patchogue Train station. That’s where his brother, 37-year-old Ecuadorian immigrant Marcelo Lucero, was attacked and fatally stabbed by seven teenagers in 2008. The assailants later admitted to targeting Latinos. “To have…the anti-immigrant in this country, come four blocks away [from] where my brother was killed, this is not easy for me,” shouted Joselo, who migrated to America in 1995, two years after his late brother. 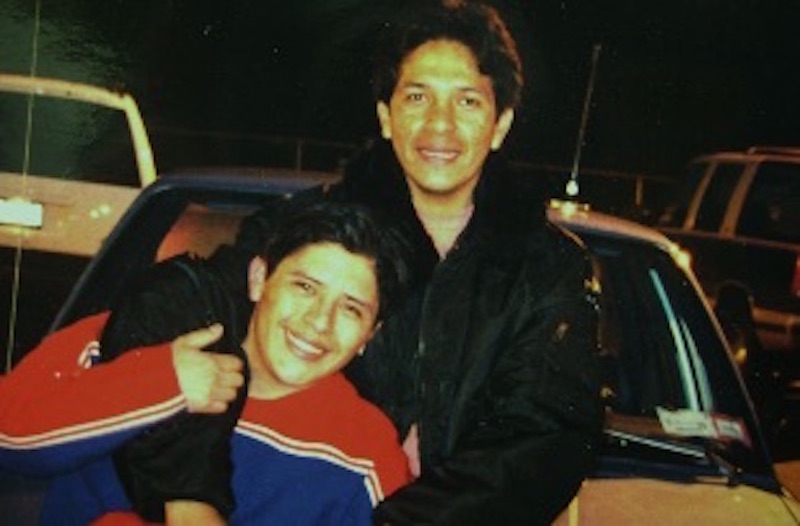 The murder came at a time when Steve Levy, who served as Suffolk County Executive from 2004-11, made national headlines for his strong opposition to illegal immigration. Now for Joselo, Trump’s election and rhetoric feels like it’s part of a recurring nightmare.

“We saw firsthand how much someone’s language affects,” said Joselo, referring to Levy. “This is something that led to my brother’s death and I hope it’s not going to lead to somebody else’s.”

Levy disputes any correlation between political rhetoric and hate crimes.

“There is no link between saying that you want to secure a border and a hate crime and it’s despicable for anyone to suggest that folks wanting to enforce our immigration laws are somehow promoting hate crimes,” said Levy, who agrees with Trump’s desire to secure the border. Nevertheless, Levy admits Trump has gone overboard by saying “ridiculous…and insensitive things,” noting a Muslim ban is something he’d never support.

But what about undocumented immigrants who have lived in the U.S. most of their lives? Trump has vowed they would get “no amnesty,” including nearly 750,000 who were brought to the U.S. illegally by their parents as minors. These DREAMers received work authorization and protection against deportation under President Obama’s 2012 Deferred Action for Childhood Arrivals (DACA).

“We are talking about people who have been here since they were babes in arms and the only language that they speak is English,” said Damas. “I know a DACA recipient who was carried across the U.S.-Mexico border when he was 6 months old…he is now 32 and this is his country; this is what he knows.”

On Long Island, CARECEN has been scrambling to find other ways for DREAMers to maintain their immigration status if DACA were overturned, including meeting requirements for a green card if they have a family member with legal status. 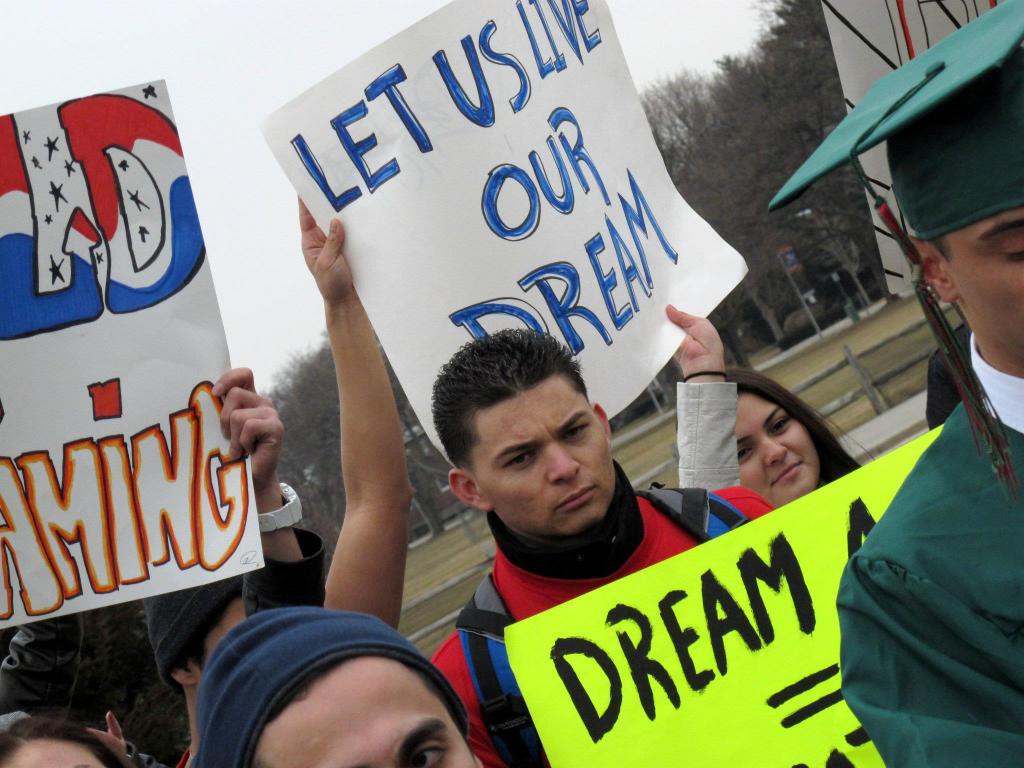 But Levy believes the policy encourages more undocumented immigrants to enter the country.

“[Amnesty] sends a message that we’re not serious about enforcing our law so the word gets out to the rest of the world, ‘Just step foot on the mainland and you’ll never be sent back,’ which is why you’ve seen the floods of undocumented minors pouring over the border,” he said.

Statistically speaking, the U.S. has in fact seen a large number of unaccompanied children crossing the border illegally. In 2016, more than 1,800 came to Long Island, which has the fifth largest Central American community in the country.

In turn, schools have become another area of bias and insecurity for young undocumented immigrants. All children are entitled to a free education up until high school as a result of a 1982 Supreme Court ruling. Some districts, including the Hempstead School District, said schools were becoming overcrowded and facing insufficient resources. The issues escalated, leading to New York Attorney General Eric Schneiderman’s investigation on Nassau and Suffolk districts in 2014. Schneiderman found schools were delaying enrollment of unaccompanied minors in several ways, including “overly-restrictive policies on proof of immunization.” An agreement was reached in 2015 ensuring these students are able to enroll in school.

Anti-illegal immigrant proponents also point to fiscal problems as a reason to get tougher on immigration. Levy mentioned strains on emergency rooms and overcrowded housing.

Slutksy, who said affordable housing has long been a battle on Long Island regardless of immigration, said the emergency room strain is inaccurate: “The last place [undocumented immigrants] want to go is to an emergency room because that’s when they’ll be found. And the fear of deportation is greater than the fear of being sick.”

A 2014 report from Journal of Immigrant and Minority Health confirmed, “non-citizens were less likely” than others to use emergency departments in the U.S. between 2000-2008. The New York State Department of Health said it does not collect information on the number of undocumented immigrants that use emergency rooms, which are required by law to treat anyone who enters.

“[Immigration status] isn’t something we ask or check on the way in,” said Dr. John D’Angelo, New York’s Northwell Health’s chair of emergency medicine. Undocumented patients make up a portion of the uninsured patients seeking medical care, which D’Angelo estimates is only “in the single digits to 10 percent range” at Northwell Health emergency rooms. 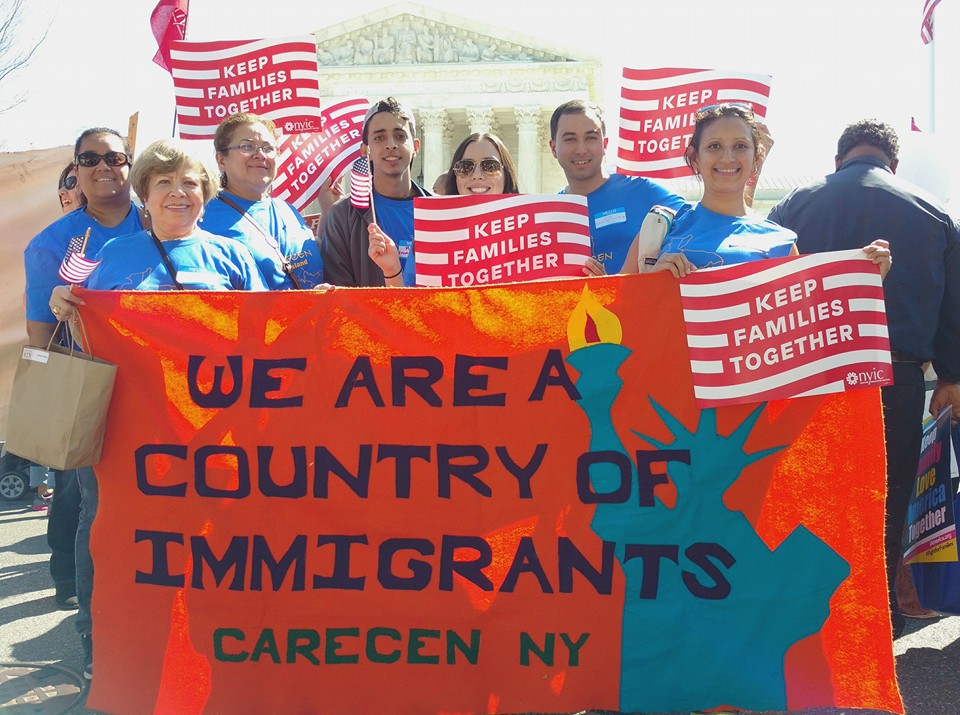 Instead of focusing on the burdens with immigration, Slutsky stressed the ways in which it enriches Long Island and emphasized the need for comprehensive immigration reform. She described immigration laws as antiquated, especially since many have been in place for decades. “There should be a much more effective process where people don’t have to wait sometimes decades [to come into the country legally],” she said.

Most immigrants qualify for visas through family relationships or employer sponsorship. As of November 2016, 4.4 million were on the waiting list for a visa to enter the country, according to the U.S. Department of State. This year, the U.S. will grant no more than 226,000 family-sponsored visas and 140,000 employment-based visas leaving the others, a little more than 90 percent of the waiting list, on a growing backlog.

Yet undocumented immigrants, Slutsky said, are often fleeing violence, abject poverty and corrupt government and coming to America for a better life. “If we’re going to be the leader of the free world…we can’t be isolationists,” she said. “We can’t close off our borders.”

It remains to be seen to what extent policies will change under Trump’s presidency. But the uncertainty only adds to the fears of the immigrant community living on Long Island, especially in Suffolk County where Trump won by more than 51,000 votes. It’s even harder for residents like Joselo Lucero who still suffers with the pain of losing his brother because of a hate crime.

“I don’t have any idea [what will happen],” said Joselo, who has been giving anti-hate presentations in schools since his brother’s death. “All I can say is I hope the community stays together and stays strong moving forward and tries not to be intimidated… people should be connected right now, especially minorities.”