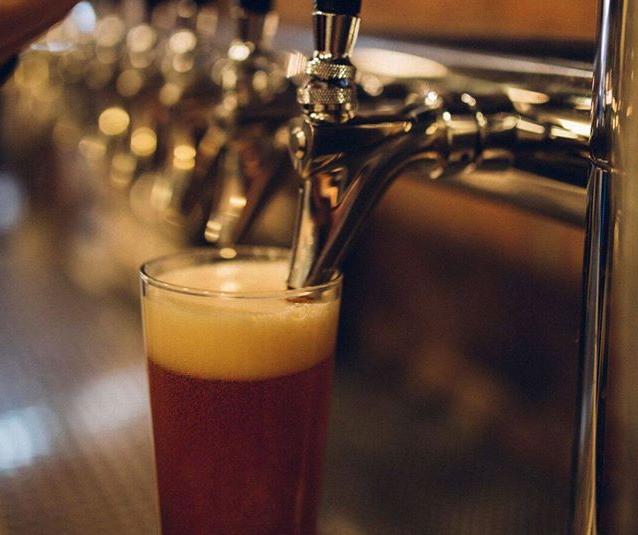 Welcome to Behind the Bar(tender), a series in which Long Island Pulse, thirsty for great conversation and even better cocktails, meets with the island’s most talented bartenders.

Bartending since:
I didn’t start until early 2016. But I’ve been in hospitality since 2001.

Favorite thing about working behind a bar:
Seeing a guest’s excitement from a cocktail I’ve made will never get old.

Least favorite thing about working behind a bar:
The hours. By the time the weekend’s over, I refer to myself as “The Incredible Zombieman.”

Define the perfect cocktail:
One that isn’t contrived or made with more than three ingredients. There’s something to be said about the simplicity of the classics, where the few ingredients used intermingle flawlessly.

Weirdest drink request you’ve ever gotten:
A dirty Cosmopolitan—yes, a Cosmo with added olive juice. That was both groundbreaking and cringeworthy. When I served the cocktail, I was kindly reminded that I forgot a garnish of olives in lieu of lime. How forgetful of me.

You find inspiration in:
Classical poetry and wintry landscapes.

Describe where you bartend:
Flight has a charming, urban-inspired atmosphere that sits uniquely within Patchogue’s vast restaurant and bar scene. The concept promotes sharing, from the American small plates to the gourmet pizzas and even the beverage program with flights offered of wine, beer and cocktails. I think it’s on the forefront of a new, fun way to dine.

This is our modern take on the New Orleans classic Sazerac. The tasting notes are similar to the classic: pleasantly medicinal, hence its name, with sweet, herbal and spicy notes.

Rinse a brandy snifter with absinthe; discard.
Combine all ingredients in a mixing glass. Add ice, and stir until chilled.
Strain into the absinthe-rinsed snifter.
Garnish with an orange peel and star anise.

Favorite drink to mix:
The Old Pal. It’s an interpretation of the classic Negroni using rye and dry vermouth.

One thing you wish would disappear from drink lists forever:
Sugary, frozen cocktails should be illegal. Especially if it has Blue Curaçao.

The best piece of bartending advice you’ve ever received:
An old friend and co-worker once taught me to fear an empty bar, especially when bartending solo. The wide availability can be dangerous if occupied at once, so knowing how to anticipate a crowd is paramount.

If you could mix a drink for one person, dead or alive:
Oscar Wilde. He loved both Champagne and absinthe, so I’d make him a Death in the Afternoon. It would be fascinating to discuss our shared taste in aesthetic, literature and fine wine.

Favorite thing to do when you’re not drinking or drink-making:
Lately: When I’m not at work, in shirt and tie, active and outgoing, I’m often on the couch, in underwear, lazy and reclusive, while writing a novel that I hope to have published in a year’s time.

Best thing you ever drank:
I worked closely with chef Guy Reuge as the manager of Mirabelle Restaurant and Tavern and when you’re close with Guy, Old World wines often find you. He and I once enjoyed a glass of 1990 Domaines Baron de Lafite Rothschild. Ever since, I’ve romanticized over French blends.

Worst thing you ever drank:
Tequila, through a beer funnel. Yes, we’re all young once.

You recover from a hangover with:
A hangover is just a really good excuse to eat a really greasy burger.

If your bar shifts had a theme song:
Chopin’s “Nocturne op.9 No.2” softly outside of my head, Nirvana’s “Smells Like Teen Spirit” noisily inside. Those roles often change throughout the evening.

After a shift, you drink:
A glass of red. Lately I’ve been enjoying a Washington State Cabernet Sauvignon by Barnard Griffin.