Joselo Lucero immigrated to America from Ecuador in 1994 to avoid serving in the war against Peru.

I was reaching the age to serve in the military. When you reach that age, you don’t really have a choice. I would have had to serve in the war against Peru. My Mom decided to send me to the US. When you come, you have no idea. You can’t speak English. The shock is that you can’t communicate with anyone. You don’t know where you’re going. You don’t find a job. You have to start from zero. [When you do find a job], you’re talking about some of the worst jobs you can get. I remember my first job was at a dry cleaner. I learned to iron shirts. I made $4.50 per hour. It was nothing.

Seven teenagers beat Lucero’s brother, Marcelo, to death in 2008, who later admitted to targeting Latinos. To honor his brother, Lucero speaks about the dangers of violence and racism in local schools. 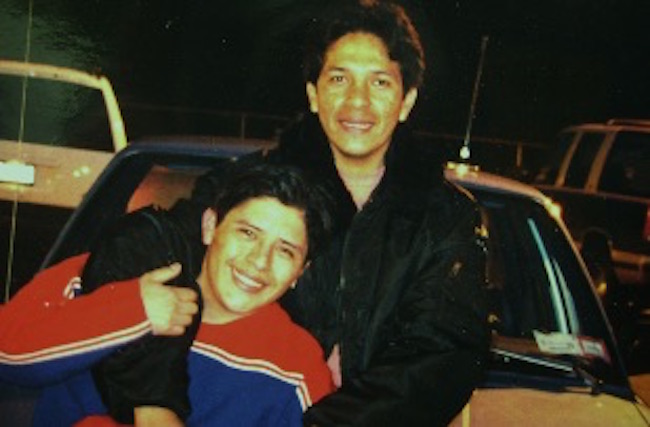 One [of my successes since moving to America] was to be part of the community, to have a voice in the community, to support my community, to encourage the next generation to do the right thing and be more educated. I’m trying to be really active in the community and schools. I speak in schools about two to three times per month. The message is to fight violence, hatred. That’s something important because any immigrant at any time could be in the same situation [as my brother]. People are getting assaulted for other reasons, too. Anytime if you are part of a minority…in terms of color, background, religion, sexual, you are at risk.

I hear the stereotype that every Hispanic is violent, a criminal. We are not. We are trying to have a life here. One of the things about Donald Trump, they’ve been saying it’s based on rhetoric and stereotypes. But…the way he acts has no limits.

I don’t have a fear. I’m not scared. I already lost my brother. They cannot take away anything else from me. My fear is for the people in the community. Kids from different backgrounds will be stereotyped, even if they are second or third generation Americans. I have a friend who is Ecuadorian and has four kids. The only culture they know is America but when they walk into the streets they’re going to be stereotyped…because they’re Hispanic.

Now a lot of kids don’t want to have an accent. They get close-minded. People feel shame about their backgrounds. A lot of people I know say, ‘My kids do not speak Spanish, only English.’ This is sad. There are more opportunities [for work] if you learn English. You can speak Spanish in the house and English outside of it. You can say, ‘I came from this country and celebrate this culture but I am open to different cultures also.’

I am always up for learning other cultures. We didn’t celebrate Thanksgiving but since we are here, we get to together. You learn about holy days, Martin Luther King. You learn all different things and you can analyze them. That’s a good thing. You are allowed to adopt some different holidays or cultures.

As for the people who come undocumented…we have to know what exactly happened to them. Someone could be raped or used for drug trafficking. I wouldn’t want my daughter or son to go through that. They should be allowed to come to the United States. Republicans have been playing hot potato for years. They don’t move forward. This is a terrible situation.

I know what it’s like to be a victim. There are worse times coming now.