FEAR OF CHANGE, it seems, is a burden that Porsche die-hards have had to bear from the beginning. Old-timers remember when their beloved 356 added two cylinders in 1964 to become the 911. And from that year onward, every Carrera would feature a twin-turbocharged engine in the tradition of the mighty 911 Turbo. But the anticipation that the 911 would be tainted forever is unfounded. And, in fact, this doubter has become a zealous convert.

The newest 911 Carrera is sheer brilliance. Reduce engine displacement from 3.8 liters to a mere 3.0, add a pair of tiny whistling turbochargers, wave an engineer’s magic wand and voila, Porsche has the best-performing, fastest, most powerful 911 Carrera in its storied history. All while returning about 24 mpg combined, as if anyone with a 911 steering wheel in their hands might care.

The secret ingredient that makes this latest 911 so much fun is not just 20 more horsepower ladled on both Carrera and Carrera S models (bumped to 370 hp and 420 hp, respectively), but torque. Finally, we have a Carrera whose engine can spin to 7,500 rpm and deliver the visceral grunt to banish “if only” from one’s vocabulary. The top-of-the line Carrera 4S coupe equipped with Sport Chrono Package and PDK (Porsche’s wonderful seven-speed automatic transmission) gets from 0-to-60 mph in a scant 3.6 seconds. The seven-speed manual gearbox takes a fraction longer, but with an element of entertainment that only a stick-shift and a clutch pedal add to the equation.

The 2017 Carrera comes out of the gate in 10 model variants, beginning with the rear-wheel drive Carrera and Carrera S, available as a coupe or Cabriolet. The all-wheel drive Carrera 4 and Carrera 4S are available as a coupe, Cabriolet or Targa. The Carrera 4S represents the full-house development of the new 911 Carrera program, a virtual showcase of latest tech from Stuttgart, and is the one to pick if one wishes to check all the boxes. While purists may insist on the feedback and lively personality of traditional rear-wheel drive, all-wheel drive adds additional stick-factor and will spoil anyone driving where inclement weather is a part of the landscape. 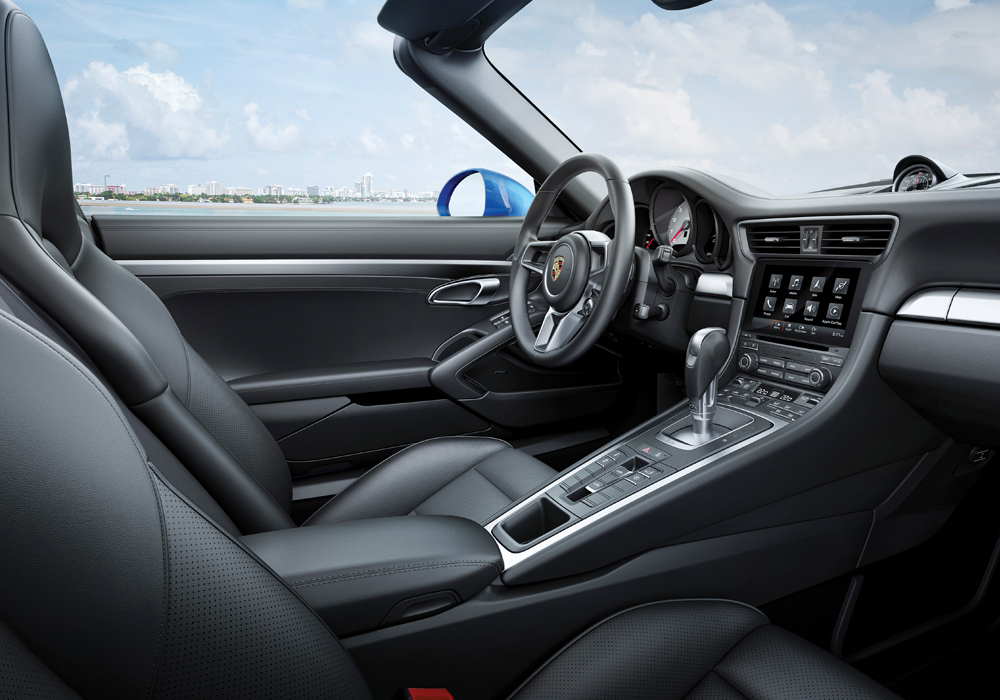 A few new optional features make the latest 911 even more civilized, like lane change assist and a front-axle lift system that raises the front end to negotiate steep driveways. Options that are simply too good to pass up are aplenty and include the $6,810 sport package with multiple features like a central-positioned, twin-pipe sport exhaust and rear axle steering that sharpens handling and reduces the car’s turning circle. The $4,050 Porsche Dynamic Chassis Control and PASM Sport Suspension lower the car’s ride height and impart even more responsive handling appreciated by weekend racers and track junkies.

The optional full-leather interior, power sport seats and Premium Package Plus add more than $10,000 to the base price but elevate the cabin to first class. The Carrera’s high-quality materials and workmanship inspire confidence that this car is built by people who care. Audio options range from Bose to Burmester, although the real music comes from behind the driver. And what sweet music it is. Those naysayers who predicted the turbos would choke the soundtrack of the Carrera’s clattering boxer engine are wrong. If anything, the spinning impellers add sparkle and excitement when spooled up to redline and in perfectly rev-matched downshifts. And nothing handles quite like a 911, with steering that is seemingly telepathic, light and instantaneous without a hint of fidgeting. Match that with a tight but compliant suspension (dialed in to taste), powerful brakes, a torquier and more responsive engine and the recipe for success is sweeter than ever before.

Of course, Porsche has been cooking up magic with the 911 for more than 50 years, and every generation of 911 has its proponents. But one drive through the canyon or blasting down the inter-state fast lane is more than sufficient to reveal that the new Carrera is the best Carrera ever. This is a car that will never get boring, yet never be fatiguing or finicky to own. It is not fancy, exotic or (by comparison to some other cars) expensive. The Carrera 4S is simply the car you want to drive, every single day of the year.