It’s a common conundrum. A group of friends is going skiing, but among those who would love to get away are one or two who aren’t so into skiing. Should they bother to tag along? Absolutely, at least if the destination is the rustic-luxe Whiteface Lodge in Lake Placid. Yes, rustic-luxe is a seemingly odd combination. But when successfully executed, as it is here, one feels utterly spoiled yet at home, as though staying in the lodge of a favorite (wealthy) uncle. Every piece of timber used in this resort came from the plot of land it’s on. The whole place smells faintly of pine, or maybe birch? Cedar? Whatever it is, the scent is soothing and quite special.

It’s less than 10 miles to Whiteface Mountain, which means the serious skiers in the group won’t need much convincing to stay here. It’s well known, especially to those looking for intermediate and expert terrain. It has the longest single intermediate run in the Northeast, the 2.1-mile long Wilmington Trail, as well as “the slides,” double black-diamond wilderness skiing down the highest vertical drop in the East, three times as high as the Empire State Building.

At the same time, everyone will have plenty of after (or instead of) skiing fun, all of it either at Whiteface Lodge or less than 10 minutes away by car.

See where the miracle happened. That would be at the Lake Placid Olympic Facilities and Museum, where the winter Olympics was hosted in 1932 and 1980. Hockey fans will know “the miracle” refers to the impossible victory of the US hockey team over the Soviet Union in 1980. Guided tours are given regularly.

Gain a new perspective. And a new appreciation for ski jumpers at the Olympic Jumping Complex. Take a chairlift to the 120-meter jump tower, then an elevator to a viewing deck, where, suffice to say, it becomes clear what these athletes are made of. Near the entrance, snow tubes are rented by the hour.

Go below. The lower level of Whiteface Lodge has an award-winning spa, but more unusually, a small movie theatre (with the real seats, gratis popcorn and all). Three newish box-office hits a day are shown. On a recent weekend, the options were as varied as Finding Dory, Paul Blart: Mall Cop 2, Me Before You and Warcraft. A few steps away is a small, but legit, bowling alley. Clean (clean!) bowling shoes neatly ordered by size are waiting. Just ask the front desk for the key to the alley.

Go out back. Behind the resort, guests can ice skate on a private pond (and play hockey during certain hours), snowshoe, Nordic ski and sled. All the equipment is waiting in the yurt, along with creamy hot chocolate and a friendly winter sports counselor ready to offer tips. 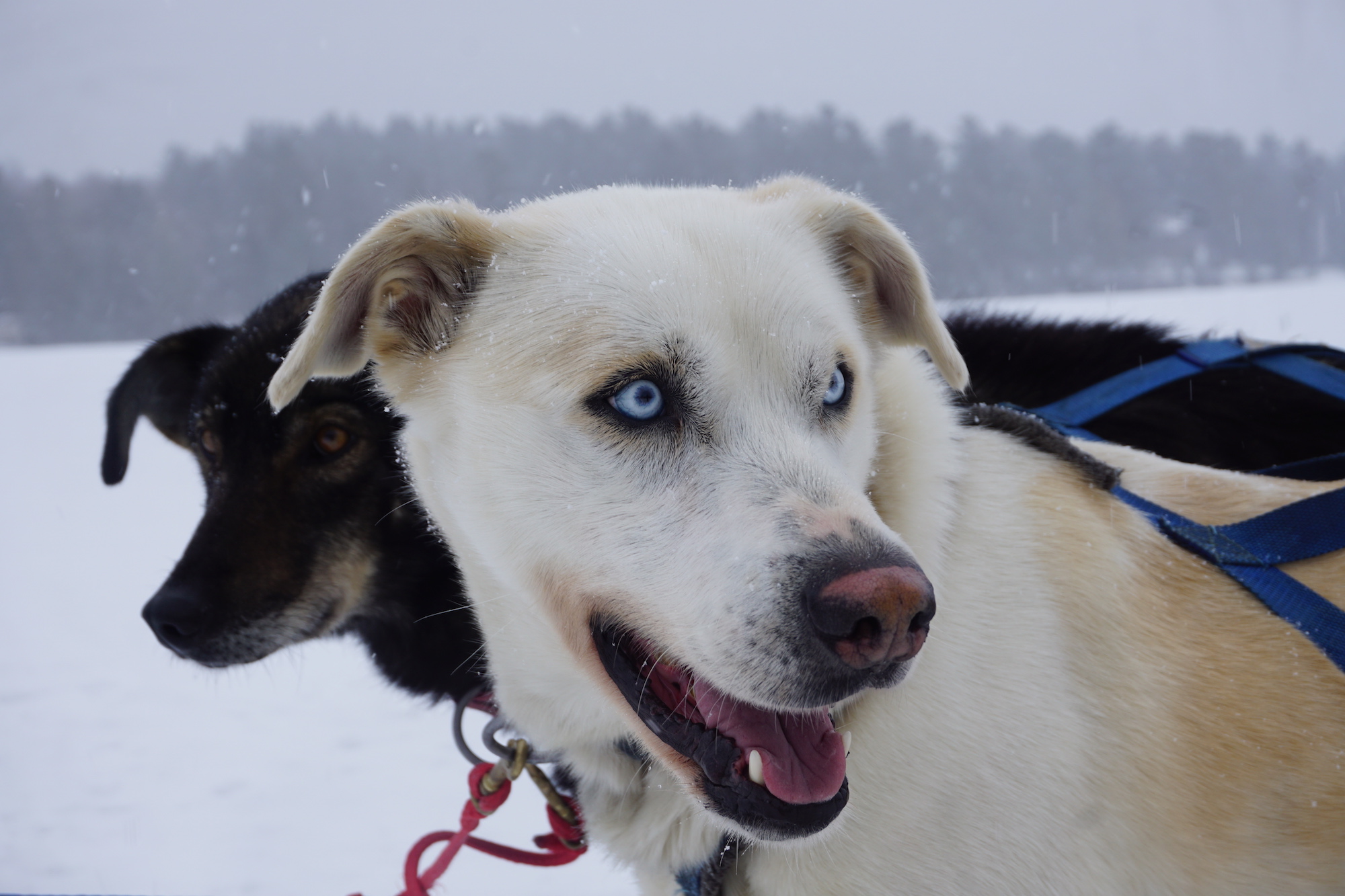 Make tracks to Lake Placid village. It’s less than a five-minute ride, but parking can be tricky, which is why Whiteface Lodge runs what they call a shuttle. Really though, it’s a (free) private car. Guests are dropped off and picked up where and when they like. Main Street is lined with adorable shops where the owners are working the counters, as well as bars and restaurants and an old-time theatre. It reminds one of Babylon village, or maybe Huntington. Mirror Lake, frozen solid during the winter months, is on one side of Main Street; at the far end is the Olympic speed skating rink. Tourists can usually be seen walking out onto the lake (sometimes way out) for awesome photo opps and a spin in a dog sled. Depending on the operator who’s there that day, the dogs may be the taller hound-husky mixed breed typical of the iditarod in Alaska, or the more familiar, bushy-coated husky-Samoyed mix. Either way, they’re friendly and happy to take adoring fans for a quick ride.

Swim in the snow. Slip into the robe and slippers left for this purpose in the suites, and take the underground tunnel to the pool. One side is indoors, the other, out; both are really warm. Heated stones pave the outside pool deck, where there is also a large hot tub.

Ride a bobsled. Hop in with a professional driver and brakeman for a run down the real-deal competition track at the Olympic Sports Complex. 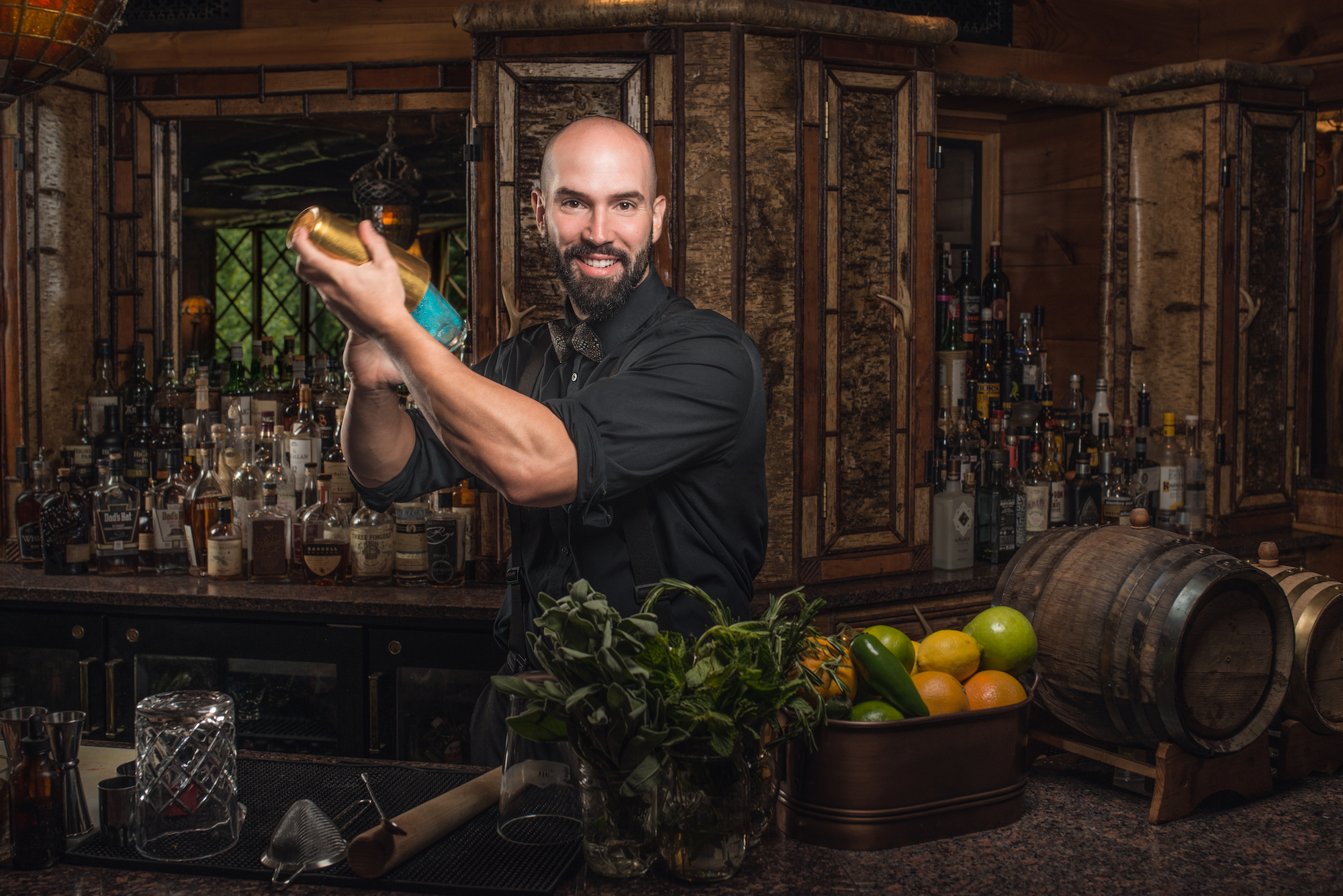 Grab a drink with Zach. The lead mixologist at the Whiteface Lodge lounge, Zachary Blair, has ditched the traditional cocktail menu, instead crafting a bespoke libation based on a series of ever-changing questions that he asks each guest (Sweet or savory? Los Angeles or Tokyo? Vodka or Gin? Pineapple or orange?). The time involved (he’s known to serve flaming and smoking cocktails) necessitates some limits. Only guests seated at the bar can participate, and New Year’s Eve is just too busy. Often one patron will get such a kick out of it, she’ll encourage the next customer to give it a try. “Before you know it, they’re making new friends, and the whole bar is chatting with each other and me, instead of looking down at their phones.” In the past two years, Zach has come up with 6,000 new recipes.

Split the clouds. Figuratively speaking, anyway, on the Whiteface Mountain gondola. The eight-passenger Cloudsplitter Gondola makes it to the summit in less than 15 minutes. Riders drift over ski trails, woods and intense scenic views.