ON FEBRUARY 11, 1972, Nassau Coliseum had yet to be completed. Temporary seats lined the court, upper level seats were in place but left unnumbered, concession stand refreshments were sparse and speakers were all but audible.

Still, on February 11, 1972, Nassau Coliseum opened, ushering in a new era of entertainment on Long Island. Nearly 8,000 spectators watched the New York Nets defeat the Pittsburgh Condors, 129-121. Yet the ABA game, nor the 45-point performance from future NBA Hall of Famer Rick Barry, was the main draw. Instead, it was the building itself—and the status it represented—that attracted Long Islanders from far and wide. “Nassau Coliseum, for the first time, made Long Island major league,” said Nick Hirshon, a former Daily News reporter and author of Nassau Veterans Memorial Coliseum (Images of America). “In a lot of ways, Nassau Coliseum put Long Island on the map.”

In its heyday, the Coliseum “booked as many big league acts and teams as any arena in the world,” Hirshon said. “There wasn’t a major act of the 70s or 80s that didn’t come to Nassau Coliseum—Paul McCartney and Elvis and Frank Sinatra.” It did a credible job of bringing top-flight entertainment to LI for years but in the 2000s, it fell on hard times: the Islanders’ glory days were a distant memory, the building was antiquated and a seemingly endless legal battle waged on over developing the area.

All that is now in the rear view mirror. After a nearly two-year renovation, Long Island has its focal point again. And on April 5, throngs of Long Islanders will fill the Coliseum’s seats not just to watch Billy Joel baptize the revived venue, but to be in the center of it all. 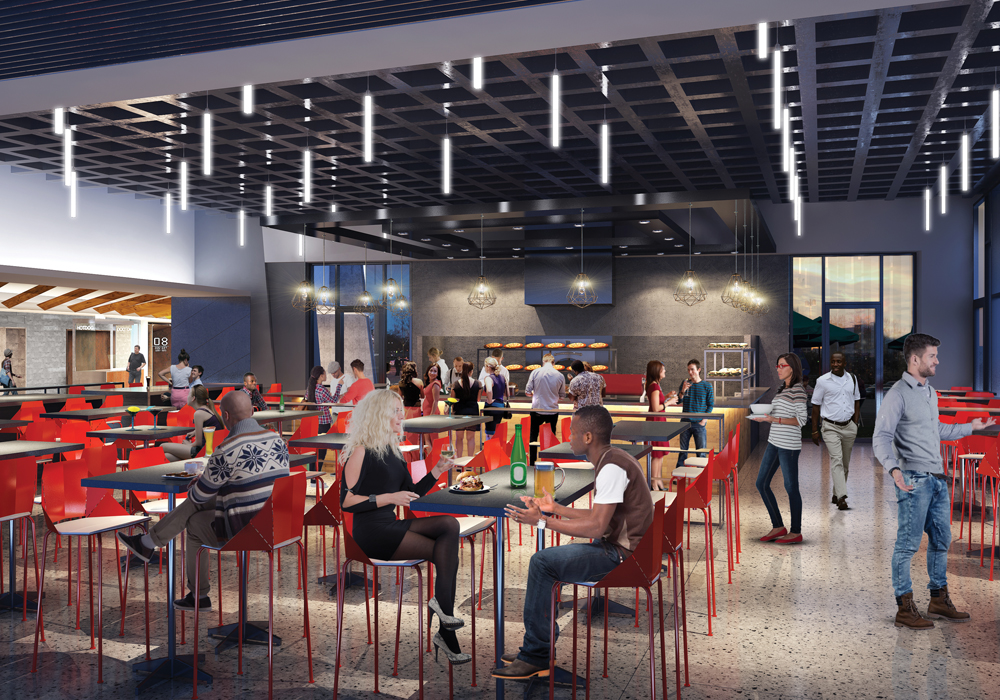 Local eateries have been curated to underscore Long Island’s personality in every way.

THE SHOE THAT FITS

When prospective developers met with the Long Island Business Advisory Council in May 2013 to present their proposals for renovating and revitalizing the Nassau Coliseum hub, there was an unexpected, yet exceedingly observable attendee: Jay-Z.

The rap icon was part of the contingent representing Nassau Events Center (NEC), an affiliate of Forest City Ratner, the developer of Brooklyn’s Barclays Center. Jay-Z was on hand to showcase the group’s star power. His own entertainment company, Roc Nation, is associated with Barclays Center and has helped bring top acts to the arena. If given the chance, it would do the same at the Coliseum.

The Brooklyn-born Grammy winner’s presence might have been a nice accouterment to the presentation but ultimately, it was what NEC envisioned—and guaranteed—that proved most important: a state-of-the-art, 13,000-seat arena that would host nearly 300 events annually in addition to a 2,000-seat theater and 2,500-seat amphitheater outside the Coliseum. The project would generate billions in economic activity and be financed entirely by $229 million of private money (a number that would eventually increase to about $260 million).

Two months after its presentation, NEC was named a finalist along with another local entertainment giant: The Madison Square Garden Company. What ultimately tipped the scales in NEC’s favor—a decision made unanimously by Nassau County’s 19-member Legislature—was naturally, money. Nassau County executive Ed Mangano described NEC’s proposal as “the best opportunity for Nassau County residents, one that will create jobs and opportunities, one that generates the greatest revenue for the county and completely relieves the county of costly capital expenditures.”

Under NEC’s rent agreement, the company will pay 8 percent of annual gross revenue to the county, with a minimum rent of $4 million, escalating by 10 percent every five years. According to the county’s financial adviser, Public Financial Management, Inc., NEC’s total minimum rent payable over the initial 34 years of the lease is $194 million, $82 million more than MSG’s proposal. 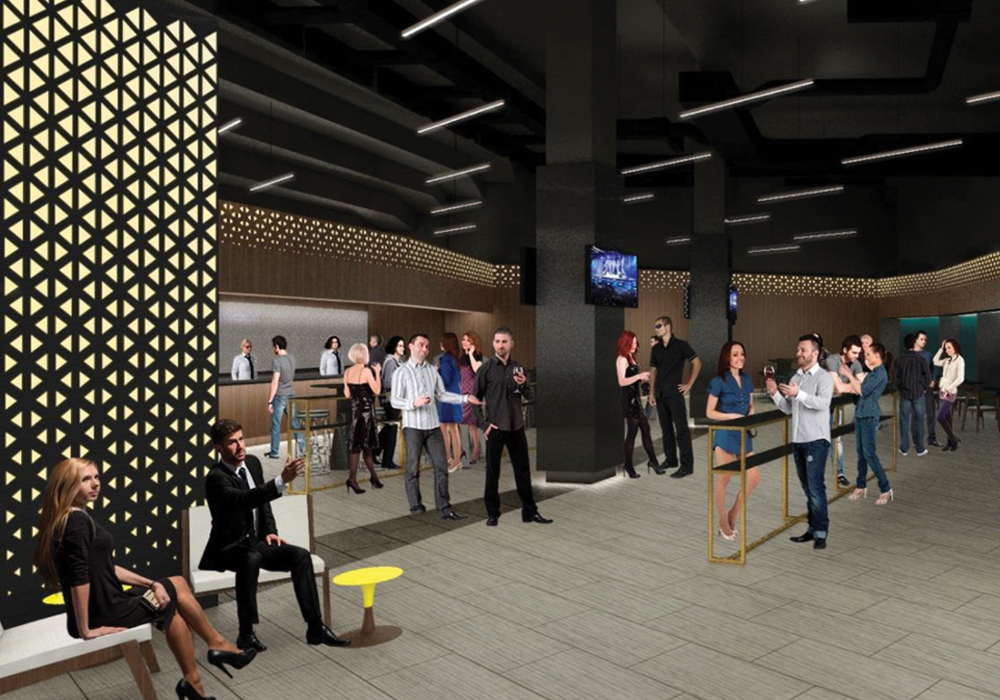 The textures used convey the natural identity of the building’s surroundings.

Before the Islanders moved to Brooklyn, Nassau Coliseum was the second-oldest NHL arena, behind only MSG, which itself underwent recent renovations. The Coliseum was built in the early 70s when the only objective for such a place was to create a structure where people could simply come see an event. It had quickly become outdated, more utilitarian than modern, more pragmatic than efficient.

The Coliseum, for all intents and purposes, was a time machine. Step in and be transported to seemingly ancient architecture and design: concrete walls, faded paint, ineffective layout and cramped legroom. The first step in bringing the arena back to life was to give the building a dramatic facelift.

To fix the exterior aesthetics, NEC called upon architecture firm SHoP, which designed Barclays. The group constructed a sinuous steel latticework shell that, according to the Coliseum officials, “evokes Long Island’s iconic imagery, such as beach dunes, dune fencing, decks and boardwalks.” Bruce Ratner, executive vice president of Ratner Forest City, proclaimed in a 2015 press conference that the building would be, “known far and wide as one of the most beautiful and striking arenas in the world.”

For visitors, the greatest change will be inside—a transformation that will be noticed instantaneously. By relocating the box office inside the east entry, the architects have created a bay that greets visitors with sweeping views. “When you come in now, you have this great view directly into the bowl,” said architect Peter Wang, principal and design director at Gensler, the architecture firm enlisted to renovate the interior. “The energy inside the bowl will be palpable when you first walk in.”

Ensuring people are connected to the show was one of Gensler’s prime objectives in renovating. “We completely blew each of the gates open so that you have a smooth transition from the concourse into the bowl itself. We replaced all the metal and glass around the perimeter with transparent and clear glass, so people within the building will have a greater connection with the outdoors and those outside will have a greater connection to all the activities happening inside,” Wang explained.

The new layout will allow for more efficient—and enjoyable—movement around the building. Gensler also made some less sexy, but equally vital updates behind the scenes. “The infrastructure, the part that makes a coliseum work in terms of mechanical systems, electrical systems, Wi-Fi, show production backbone equipment, all of that has been updated,” Wang said. He added that regulations, such as those that fall under Americans with Disabilities Act, are all being brought up to code.

The designers not only acknowledged the old Coliseum’s “good bones,” but accentuated them. Thus the renovation was less of a gut job and more of a makeover. “It’s got the good bones of the old Nassau but its gotten new clothes,” Wang said. “If somebody visited the Coliseum without knowing that it was fourty-plus years old, they wouldn’t realize that it was actually a renovation rather than a new build.” 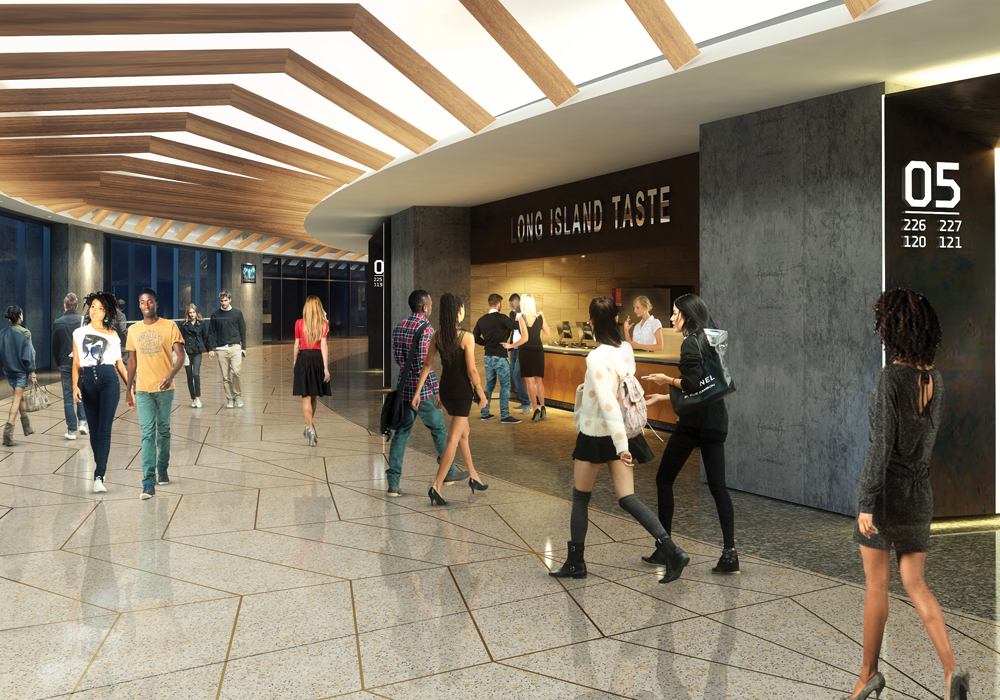 Every facet of the Coliseum’s new layout is more open, connecting the indoors with the outdoors.

THE CIRCUS COMES TO TOWN

Although it already runs a world-class venue a mere 20 miles away, Brooklyn Sports & Entertainment, the company in charge of operating both Barclays and now the Coliseum, saw a distinct opportunity in Nassau, an area it views as having its own self-sustaining market. “Not a lot of buyers were coming from Long Island into Manhattan or to Brooklyn,” said Keith Sheldon, BSE’s senior vice president of programming. “Long Island is a market in and of its own with its robust population. It has different demographics than Brooklyn or the city and we saw that this market could be self-serving.”

Hirshon agreed: “It’s such a lucrative market… there’s a lot of disposable income, it’s going to be a desirable location for every major act.”

BSE is bringing in those major acts with a programming plan devised particularly for the region. Look no further than the Coliseum’s opening week line-up to understand the underlying theme: big names, with a decidedly local touch. After LI’s favorite son exits stage left, Rock and Roll Hall of Famer Stevie Nicks and Tony winner (and Syosset native) Idina Menzel perform the following two nights, respectively. “That first week of program serves as a microcosm of what we’re trying to do: bring a diversity of content to Long Island,” Sheldon explained. “It’s about finding content opportunities that really fit the market that may not be the perfect fit anywhere else in the tristate area, but on Long Island make a lot of sense.”

Later in the year, top names like Bruno Mars and Roger Waters will captivate Coliseum crowds just nights after taking the stage at Barclays, highlighting a significant advantage the new building has thanks to its sister venue. “When there’s an opportunity to cross-book with the Barclays Center we are being opportunistic,” Sheldon said. “That is one of the great dynamics: being able to capitalize on two different buildings in the same marketing DMA [Designated Market Area], but that really service two different markets.”

Maybe the biggest change to the building is what’s missing: the Islanders. The Coliseum played host to 40-plus games annually before the team relocated in 2015. They will be replaced on the Coliseum’s sporting schedule by the Long Island Nets (the Brooklyn Nets’ Developmental League team), supplemented by college basketball and hockey, as well as a series of boxing events.

Though the Coliseum will not have its consistent main draw, the silver lining is having an additional 50 days to add a diversity of events. “Having that calendar exibility will only help us continue to serve the community…We’ll bring Cirque du Soleil to the Coliseum. We’ll bring outdoor type festivals and fairs, community programming. It truly will bring something for everyone,” Sheldon added. One such event will be on May 21, when the Coliseum hosts the final performance of the Ringling Bros. and Barnum & Bailey Circus, which announced in January that it is ending its 146-year run.

The first crowd to enter the new Coliseum on April 5 will not have to suffer the same inconveniences as the original spectators in 1972. Supplementing the entertainment is the amenities, most notably the Coliseum’s food program, Long Island Taste, which aims to bring a quintessential local flavor to the venue by offering the best eats in the area. Levy Restaurants, the Coliseum’s food and beverage partner, has been curating the Island’s food scene, testing restaurants and speaking with prospective vendors. The goal is to build a culinary program with a familiar local flavor, ranging from recently launched operations that have built buzz to tradition-rich institutions that have shaped the local dining scene and have become synonymous with Long Island. The program is modeled after Barclays’ Brooklyn Taste, which has borough staples like Calexico, Paisanos and Junior’s serving up signature dishes.

The old Coliseum was a relic of days gone by—modern venues sped past it at speed-of-light pace. Its renovated altar ego has made up the distance, transforming it from a 1970s concrete shell into a shimmering glimpse of the future. In Sheldon’s words, “It’s going to have that local flavor but it’s going to be a facility that really rivals any other in the tristate area.”