DURING THE GLORY days of cinema, Palm Springs evolved as a haven for movie stars because of the perfect winter climate and the stark beauty of the landscape. Not surprisingly, considering it was frequently used in films as a stand-in for exotic desert settings like those from Morocco to Arabia. As the stars came out to the desert to film their cinematic productions, they took a liking to the area and Palm Springs became well known among the Hollywood set as a relaxing place to escape the urban existence of Los Angeles. At a time when film studios controlled every aspect of their lives, actors were obliged by contract to stay within a two-hour drive of the studio lest they be needed to rework a scene. Palm Springs is just at the edge of that limit.

It endured a deep decline in popularity during the second half of the 20th century, but Palm Springs is experiencing a renaissance. For today’s sophisticated travelers it’s a rich destination, not least because of the city’s many exceptional homes, and tourist attractions embody the history and architectural development of the area. Arbiters of good taste are a driving force behind the renewed interest both for winter getaways and year-round residence. GQ magazine director Jim Moore’s purchase of a house in a previously undesirable neighborhood saw the entire area around it become highly sought after. Leonardo DiCaprio’s acquisition of the property formerly owned by big-band singer Dinah Shore (and available for rent) may be construed as another sign that a new generation of Hollywood elite is spending more time in the jewel of the desert.

The advent of the automobile made Palm Springs easily accessible and the era of automotive evolution during the mid-1900s coincided with a similarly revolutionary change in building design. Avant-garde European influences found their way to the United States in the aftermath of World Wars I and II. A pupil of Swiss architect Le Corbusier, Albert Frey, took the European sensibility for clean lines and unadorned construction and applied it to a radically different environment, the result being the foundation of the midcentury modern architectural style so fervently appreciated in California. Frey’s own home, a modest structure in a spectacular setting above the city, is still a sight to be seen for ardent architecture aficionados who make their way to Palm Springs in increasing numbers. 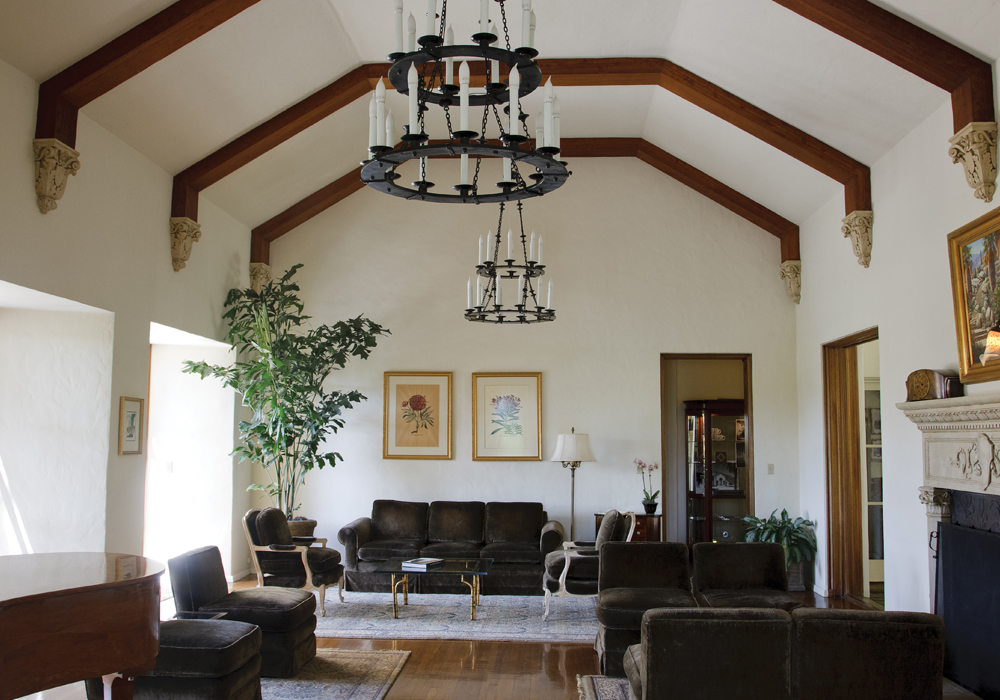 The Swiss influence in Palm Springs goes beyond Frey’s contribution. Another of the city’s architectural styles is known as “Swiss Miss” due to its A-frame structure based on Swiss chalets, though few examples of the Swiss Miss style remain. More visible in every way are the rotating cable cars ferrying passengers up and down the Palm Springs Aerial Tramway. As the cars turn while ascending and descending, riders enjoy sublime panoramas of the Coachella Valley and San Jacinto Mountains in all directions. Palm Springs neighborhoods are well defined, each having an interesting history. The area known as Sunmor, for example, has streets with names like Livmor and Playmor, but no “Eatmor” or “Drinkmor,” as guide Trevor O’Donnell pointed out during a fascinatingly detailed Palm Springs Modern Tours’ visit around the city. Sunmor was originally the Palm Springs Military Airfield. Airplanes were tied down on concrete parking circles large enough in diameter to accommodate the aircraft. The builders incorporated the parking circles into the curved streets and traffic circles, which define the neighborhood today. Perhaps the most renowned of Palm Springs’ architectural developments is the so-called Butter y House, a unique home style unmistakable in its simple yet effective construction. Parking, breezeway, windows, walls—the pattern of the Butter y House is a smart floor plan that separated the various function areas while maintaining a flow, highlighted by the dip in the roof that gives the house its name.

Before the middle of the 20th century and the yen for modernism that came to Palm Springs, Spanish Revival was the most fashionable architectural inspiration. A few examples of this early style are still found around the city, most notably The Willows mansion. Now the most eclectic hotel in Palm Springs, The Willows allows guests to immerse themselves in history while forsaking nothing of contemporary luxury. Built to be the desert hideaway for a millionaire, it later became the longtime home of a New York lawyer who rarely visited. A pair of doctors who restored the property with extraordinary care now owns The Willows. If not for The O’Donnell House next door, The Willows would be unchallenged as the best example of Spanish Revival style in the city. Not that The Willows’ owners are worried about competition for plaudits; they own The O’Donnell House, too.

Thomas O’Donnell, a frequent guest of the now defunct Desert Inn and a great friend of its owner, luminary Nellie Coffman, can be credited with the rise of Palm Springs as a playground for the rich and famous. Mr. O’Donnell’s (formerly private) golf course, located right in the middle of the city, was available for use only by him, his guests and eventually by guests of the Desert Inn. It was he who gave the money to Mrs. Co man to stave o the competition coming from her archrival, Pearl McManus, who in 1924 opened the sleek Oasis Hotel directly across the street. 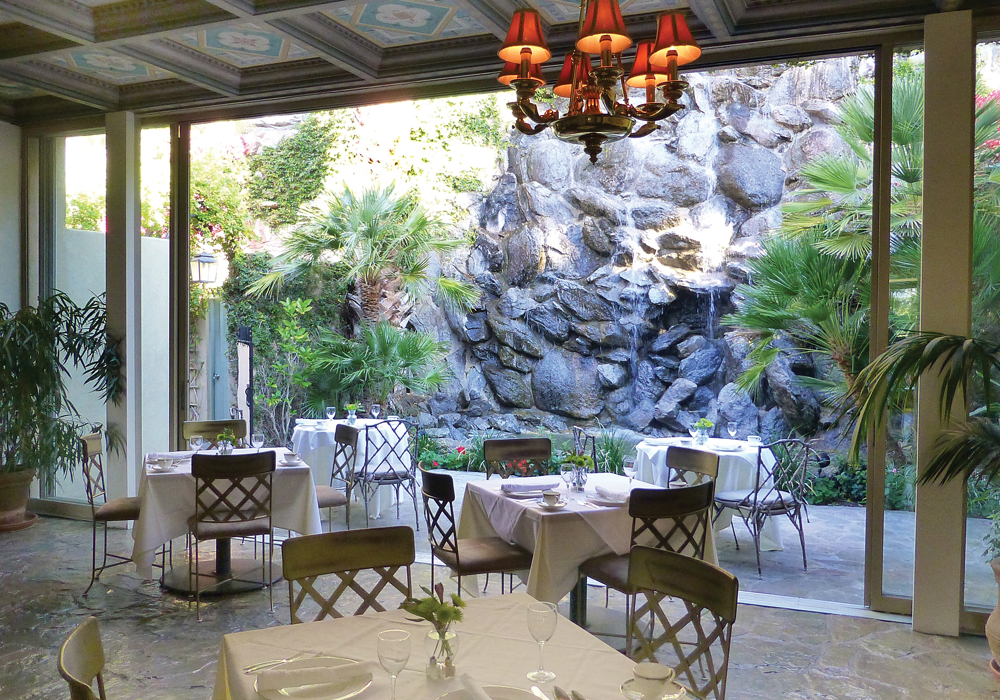 The Oasis was designed by Lloyd Wright, son of Frank, but all that is left of his daring design is a rectangular tower adorned with a Native American motif. The Oasis was followed by El Mirador, which attracted so many Hollywood celebrities the neighborhood around the hotel became known as Movie Colony. Alas, Walt Disney preferred the very exclusive Smoke Tree Ranch south of downtown. This private residential community maintains simple cottages available to visitors who seek peaceful vacations in quiet seclusion. Sorry, no castles.

Mr. O’Donnell’s one proviso attached to his financial gift was that a house be built on the property for his private use. Today The O’Donnell House is the only building in Palm Springs on the United States National Register of Historical Places. The superb home and its splendid isolation is the favorite of many an industrial titan and film star (it’s available for weddings, private family gatherings and corporate events). Diane Keaton was so taken with The O’Donnell House that she collaborated with author DJ Waldie to create a book, California Romantica, devoted to the nest examples of Spanish-style Mission architecture. 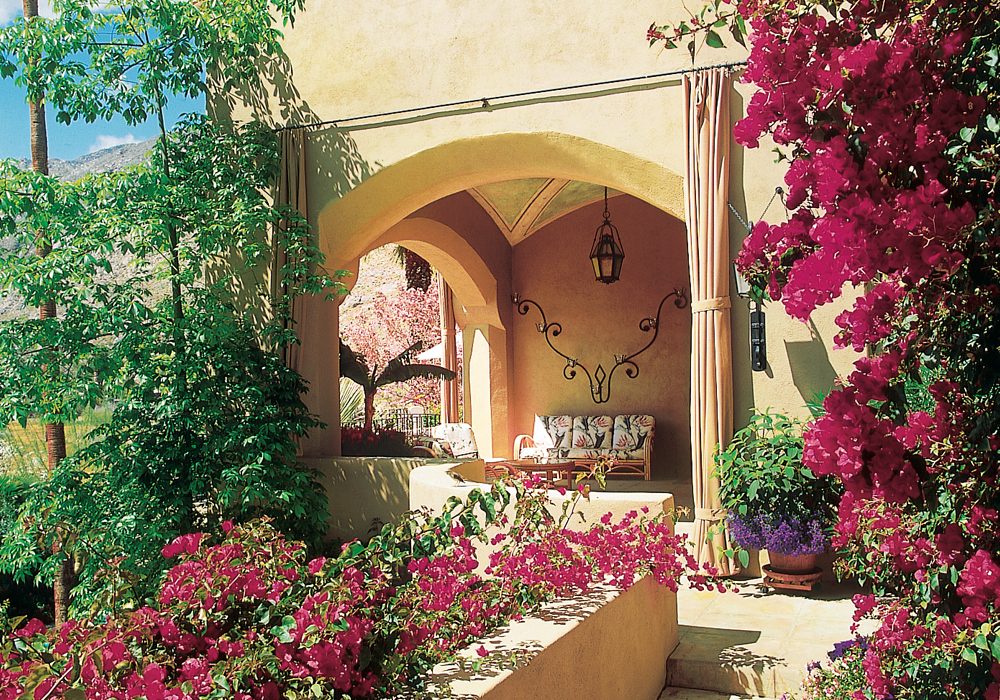 Across the street from The Willows is another of the most historic buildings in Palm Springs, the George B. Roberson House. Built in 1927, this former home of the Desert Inn’s manager (the son of Coffman) is now home to the city’s most exclusive restaurant. Le Vallauris is the domain of illustrious chef Paul Bruggemans (of Los Angeles’ Le Saint Germain fame). Bruggemans founded Le Vallauris more than 40 years ago when the large g trees shading the restaurant’s famous patio garden were mere saplings. Nowadays, the tables under the g trees are the most coveted reservations in town. Very different in ambiance but similarly imperative is a stop at Eight4Nine Restaurant & Lounge. Owners John Paschal and Willie Rhine have created a whimsical space to enjoy excellent food amid the Uptown Design District’s vintage furniture stores and artsy boutiques.

Just around the corner from The Willows, The Palm Springs Art Museum and its Annenberg Theater are located on land once part of The Willows estate. The museum’s exhibits include fine collections of glass works, Native American and Western art. Recently opened is the museum’s Architecture and Design Center located in the (former) Santa Fe Federal Savings Bank near the landmark Bank of America building on South Palm Canyon Drive. The architectural firm that handled the rehabilitation of the building, Marmol Radziner Architects of Los Angeles, previously demonstrated excellence in the restoration of two prized homes in Palm Springs, Richard Neutra’s Kaufmann House (1946) and the maritime-inspired Ship of the Desert constructed in an eclectic style known as Streamline Moderne. Vienna-born Neutra (pronounced NOY-tra), a pupil of famed Austrian architect Adolf Loos, is yet another of the stars in a constellation of architectural talent who made their names in Palm Springs.

Beyond fanciful houses, there are other attractions. Art galleries abound, casinos are busy, festivals buzzing and museums such as the Palm Springs Air Museum and Agua Caliente Cultural Museum are well patronized. An ideal winter climate attracts golfers, tennis players and especially hikers who have the privilege of exploring some of the most strikingly beautiful and pristine desert scenery in the world. 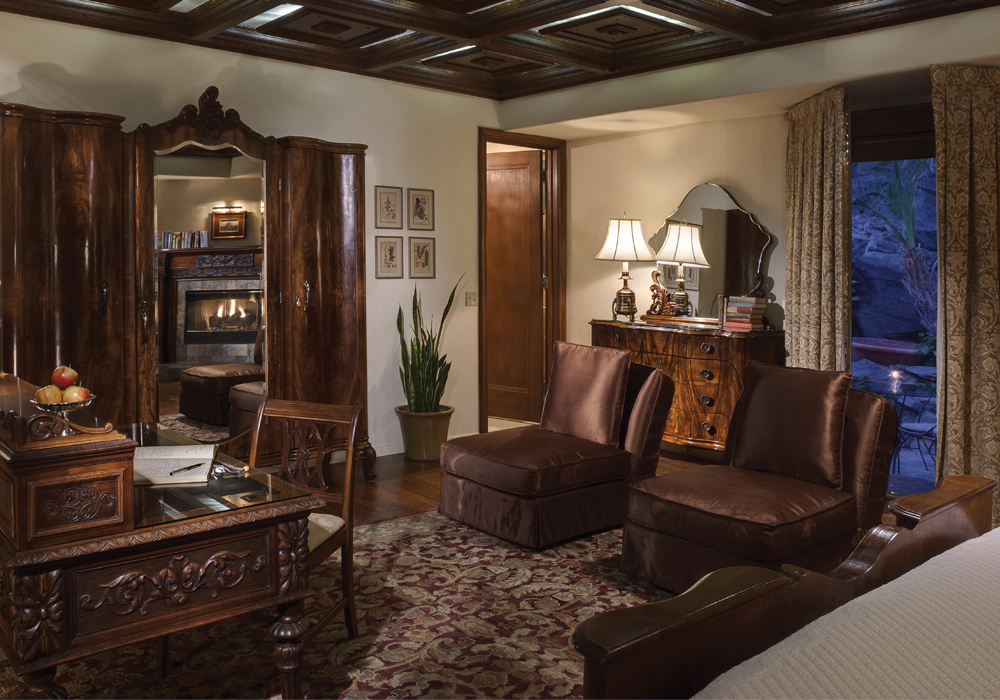 One of those golfers was Walter Annenberg, the late owner of the idyllic Sunnylands estate in nearby Rancho Mirage. Before billionaires were commonplace, Annenberg’s vast wealth made him one of the richest men in the world. His very large but surprisingly unpretentious home has welcomed many U.S. presidents and foreign heads of state. Though the priceless Annenberg collection of paintings was donated to the Metropolitan Museum of Art after his death in 2002, the reproductions on the walls are placed in exactly the positions of the originals and evoke the immense cultural, sentimental and financial value they represented to their former owner.

The culmination of Modernism might be the annual Modernism Week that sees some of Palm Springs’ most important private homes open to the public. Collaborating with Modernism Week organizers are owners of vintage automobiles who place their cars in the driveways of homes participating in the architectural tours. To add to their atmosphere, the owners go so far as to match the color and year of the cars’ production with those of the homes where they are parked.

Automobiles, so instrumental in development of Palm Springs, are still an important part of the scene. Lucky visitors with fat wallets will find the various choices at LA’s Fast Toys Club appealing for their forays into the desert. Fast Toys Club works like a supercar library. Members can take loan of cars as they wish in accordance with their membership status. Happily, Fast Toys Club also rents its cars on a daily basis. Visitors flying into LAX nearby can pick from such marques as McLaren and Rolls Royce before heading to the desert. Ferrari enthusiasts will be glad to know Fast Toys Club’s 488 does not require a 20-month wait for delivery. Like Palm Springs, it is there ready and waiting.