THE HUMBLE ORIGINS of three works on permanent display at Cooper Hewitt, Smithsonian Design Museum belie their deep importance. The textiles, stitched by Dutch schoolgirls in the 18th and 19th century, show how the preservation and recycling of materials was not a gesture, but a necessity. Clothing, both essential and consequential, could hint at occupation, status, religious beliefs and even temperament and personality. All those could be lost had someone not possessed the techniques of repair and renewal. This concept is brought to the forefront in Scraps: Fashion, Textiles and Creative Reuse, the museum’s thought-provoking exhibition focusing on the work of three designers trying to change the industry through, of all things, the art of recycling.

Textiles have been woven through human history ever since the fig leaf went out of style. During the Renaissance, tapestries were considered to be more valued than paintings. In Imperial China, silk spoke of wealth and power as much as gold and jewels did. “Textiles have, in the past, been much more valued, seen almost as money,” said Matilda McQuaid, Cooper Hewitt’s deputy curatorial director and head of textiles. However, today’s industry is much different and she and co-curator Susan Brown are trying to prompt a reconsidering with this show. 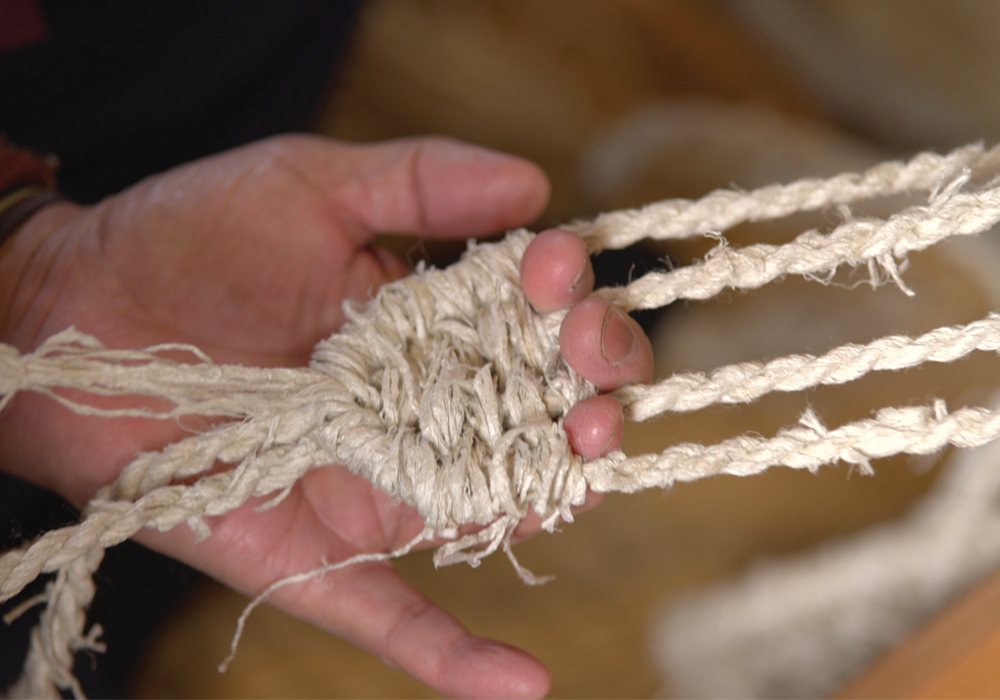 The ability to churn out clothing at a rapid-fire pace devalues each article, creating a gluttony of waste. Astonishingly, the show’s catalogue notes that textile and apparel manufacturing is the second most polluting industry in the world, following only oil, and it created close to 15 million tons of solid waste in 2013 in the U.S. alone. (The average American contributes 70 pounds of textiles and textile waste to landfills every year.) “Society is now inundated with inexpensive, machine-made apparel and home goods. With little incentive to reuse or recycle, the modern textile industry has had devastating consequences on the environment, as well as troubling impacts on local economies,” museum director Caroline Baumann wrote.

Designers Christina Kim, Luisa Cevese and Reiko Sudo have approached these issues with creativity, art and the hope that they might help save the planet. They have made sustainability key to their visions, their processes and their businesses’ bottom lines.

McQuaid said Scraps: Fashion, Textiles and Creative Reuse was developed as “a platform that was talking about the greater issue of waste but talking about it in a much more creative way, in a positive way.” The genesis of the exhibition was the acquisition of a textile created by Kim. The LA-based designer purchased jamdani saris woven by craftswomen in India to use as the base material for her line. Her diaphanous, graceful and evocative dresses, blouses, skirts and shawls seem to come from another time. Recognizing how much of their character comes from the qualities of the delicate, handmade textiles, Kim refused to waste even a scrap. After cutting the pattern for each piece, the clippings were collected and shipped back to embroiderers in India who sewed them onto new backings. Those second generation fabrics became flouncy, tiered skirts made of smaller swaths. The scraps from those garments were collected again. “One of the dearest pieces in the show are Christina’s amulets,” McQuaid explained, “the absolutely final product that she creates out of the scraps which are then stuffed with more scraps, and then a Hindu prayer inside, to create this very precious little amulet… something ultra-special out of something that could easily be thrown away.” 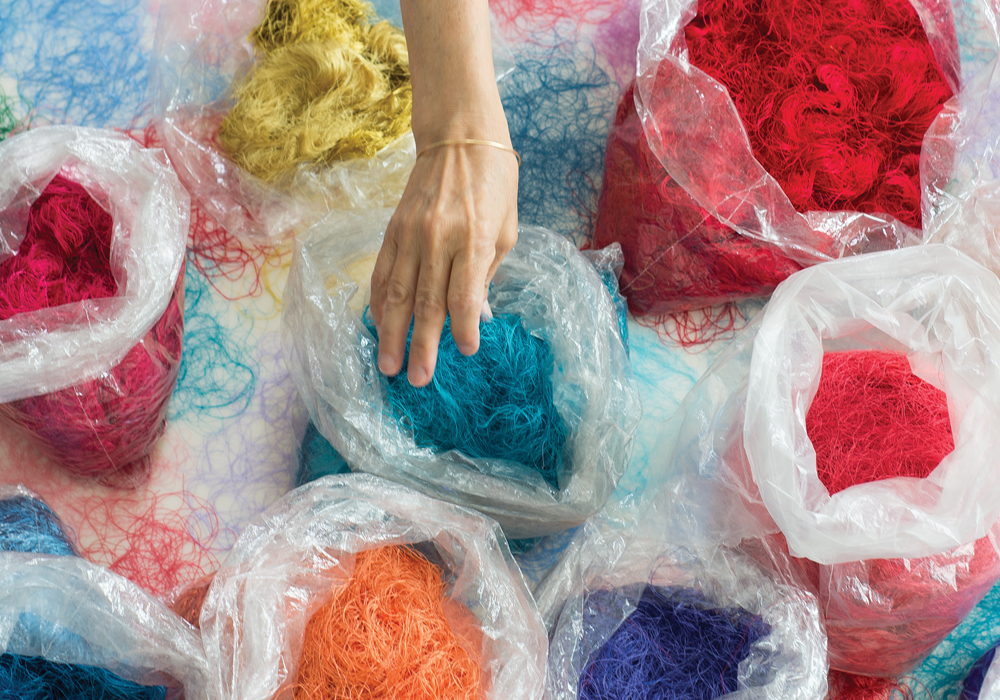 Cevese, whose work has gone into pieces for Dolce & Gabbana, Hermès and Chanel, founded Riedizioni, a design studio where re-appropriated textile waste is created into new materials. She discovers inspiration on cutting room floors, embedding found materials in translucent polyurethane that is reworked into fashion and home accessories. Vibrantly colored snippets become feathery brushstrokes, complex patterns or expressive abstractions against a milky white background. Cevese’s designs translate loose strands of fiber, fishing nets, fabric selvedges, straw and even bran hulls from a Parisian bakery into bold, painterly compositions that become functional objects like handbags, totes and re-editions of her own. McQuaid pointed out a tabletop: “Those are scraps from making the totes and all the accessories. She then re-embeds them again in polyurethane. She’s not only working with the selvedges, but she’s working with the scraps that she creates herself and going to this total recycling.”

Stopping waste before it happens guided Sudo, managing director of the Japanese firm Nuno, to study production cycles of silk. She discovered a way to turn an unusable part of the silkworm’s cocoon back into kibiso textiles, a new luxury fabric. One piece in the show, Kibiso Tsugihagi, goes a step further. “She saves the scraps from cutting out garments from the kibiso fabrics. Then she sews them on to a water-soluble based fabric,” McQuaid explained. “After they’re all sewn down, she dissolves that base fabric away and leaves behind this sort of beautiful lace-like effect.” It’s a perfect example of upcycling, a term McQuaid defined as, “taking, in this case, scraps which have very little value by themselves, but when you combine them with something else you’re making them of greater value…into something that will be treated very differently.” 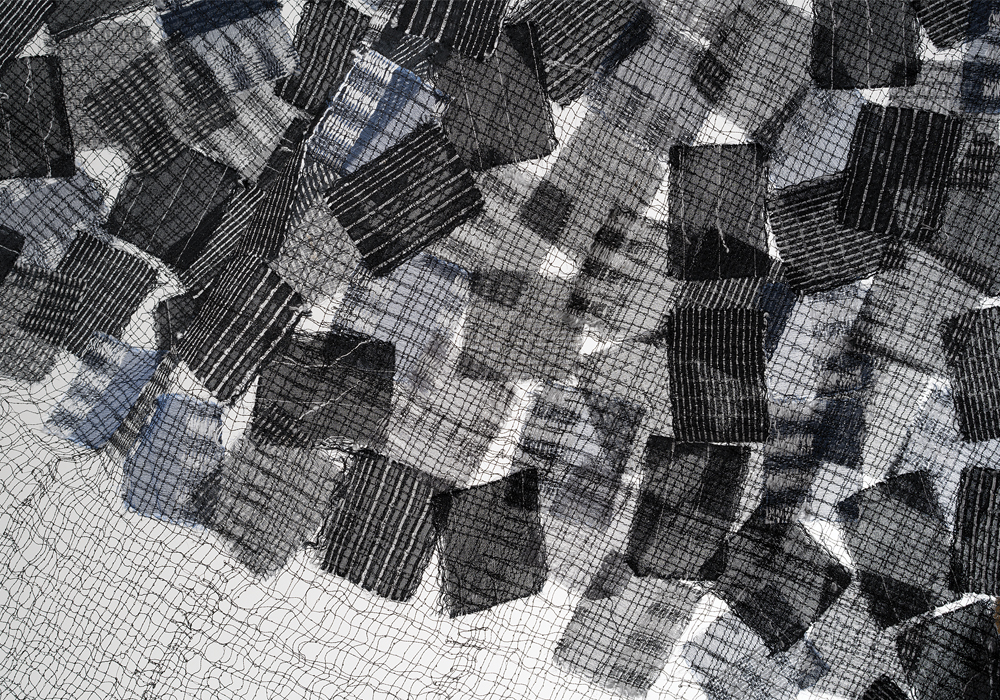 Sudo cited Japan’s mottainai ethic, a tenet of Buddhism that comes down to “waste not, want not,” as one of her motivations. “We can’t continue throwing out. It’s going, at some point, to catch up,” McQuaid added. “It’s something that we all need to understand and assume as our motto.” Artists and designers can change the world in many ways, some subtle, some like lightning bolts. This trio is trying to change tangible physical and societal realities by fostering connections to our shared past, to craftspeople around the world, to the earth and to our own possessions. As many of us look for ways to reduce our footprints, a simple step can be learning to value the art and craftsmanship of what we already have.