This is the ultimate blank canvas: a newly built Long Island City penthouse. And award-winning designer Margreet Cevasco of the eponymously named design firm in Sea Cliff took it for all its possibilities. The homeowner purchased the duplex as new construction with the intent to transform the standard model apartment into a customized, modern space with a decidedly masculine edge—the design antithesis of the traditional home he shares with his family. “[He] wanted to have one large living room that overlooked the city,” she said. “The view was paramount to the project.”

Related: Give Your Home a Modern Makeover

Clean lines and minimalism were a must, but before a color scheme or furniture arrangement could be decided, Cevasco needed to address architectural challenges that innately hindered the open floor plan the client envisioned. “We really didn’t follow any rules regarding the intentions for the rooms. I went there during construction and had access to some of the other apartments that were not modified. Of course, they were beautiful, but the repurposing the actual square footage we were able to create a much more luxurious, open feel.”

Cevasco admitted that altering the original layout was the greatest horde. The model apartment’s initial design called for the living and dining area to occupy the same undefined space. Thus she opted to relocate the dining area to a corner out-cove, making way for a larger living space where angled furniture would seemingly “float” above dark walnut stained wood floors. 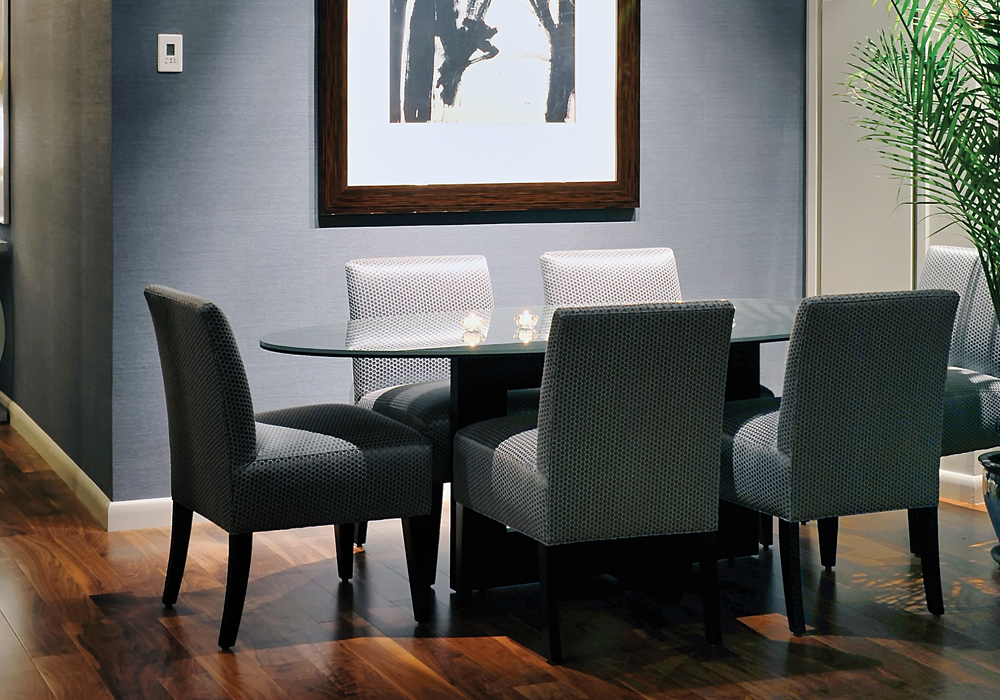 The dark navy blue accent wall helps define the dining room as its own space within the open floor plan.

Next up, she lowered the living room ceiling, not only to conceal leftover electrical wiring from the construction, but also to create a warmer ambiance in the vast space. She then coated the renovated ceiling above the center of the living room in a dark metallic, reflective paint to add an unexpected finishing touch. “As wonderful as it is to have 10-or 11-foot ceilings, you lose intimacy when the ceiling is that high. By dropping it slightly in the center and making it darker, it defined the living space.”

The cityscape and the penthouse’s industrial building were the catalyses for the next phase of the design. “He wanted it to be a modern space, and the building dictated that. And, of course, it was all about the view—we didn’t want to compete with the view. In terms colors and tone, the grays and the blues are similar to what you see when you look out onto the city. It was a little muted and a little monotone in the sense that we wanted to keep the structure of the building, the aluminum framed windows and the railings in mind.”

Neutrals are prominent throughout (a hallmark of modern design), but by no means boring. The white walls work particularly well in the penthouse with dramatic floor-to-ceiling windows. “It is very difficult to use bright, white walls unless you have adequate amounts of natural light. When the light comes through it is reflective. It allows the furniture to pop without creating too many shadows.” Bearing in mind this abundant natural light, Cevasco chose fixtures that didn’t overwhelm the rooms. She also planned for multiple lighting options that would accommodate the homeowner’s needs around the clock. “It is extremely important to layer lighting for illumination at different times of the day.” Solar shades were installed on the windows to reduce glare, protect privacy and safeguard furniture from fading in the sunlight. 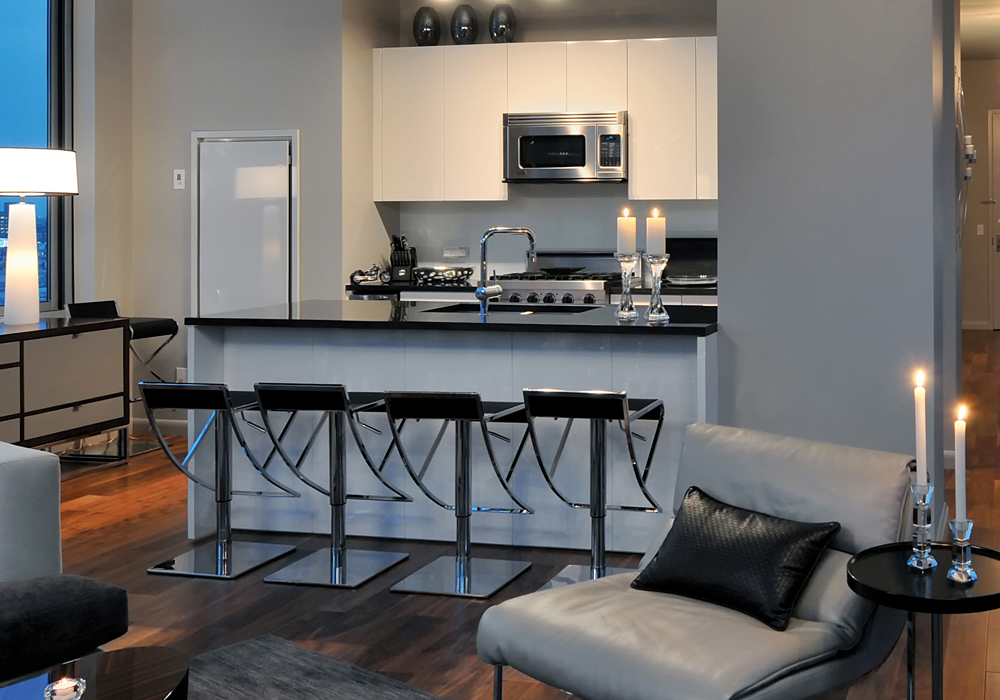 The kitchen design was kept decidedly utilitarian in nature and enhanced with visually interesting fixtures and barstools to keep the room inviting.

The low-key color theme continues in the decidedly simple kitchen with the use of crisp white cabinetry and countertops befitting contemporary design as well as the homeowner’s expectation for the space. “The kitchen seemed to call for this design. In a space like that, the kitchen was more utilitarian. It’s not a chef’s kitchen, and there was no reason to use anything too elaborate in terms of materials.” Cevasco enhanced the warmth of the space with visually interesting fixtures and barstools to make the room, “comfortable but not overpowering.”

Similarly, the single dark navy blue accent wall in the dining room helped anchor and define the newly carved out area without being overbearing. In a fluid space such as this, multiple architectural columns and interruptions can make it difficult to use various wall colors. The accent wall was an exception that, “allowed us to start and stop with the paint color,” Cevasco explained. “The wall also serves as backdrop for the dining room table and it helps tie-in the rest of the space.”

Rich colors and textiles in the oversized living room help create a welcoming environment. Cevasco incorporated luxurious and touchable fabrics such as mohair, leather and wool to dress the furnishings and accessories. “The feeling needed to be the same: modern. But at the same time the fabrics are very comfortable with an element of richness so it doesn’t feel cold.” The geometric pattern on the throw pillows again reflected the angular, modern exterior of the building while incorporating a more masculine edge. Conversely, flora also factored into the motif. “There always has to be a little bit of softness from greenery. It is kind of an instinctive feng shui, bringing the outside in. Wood, metal, earth all combined to create an inviting interior space.” 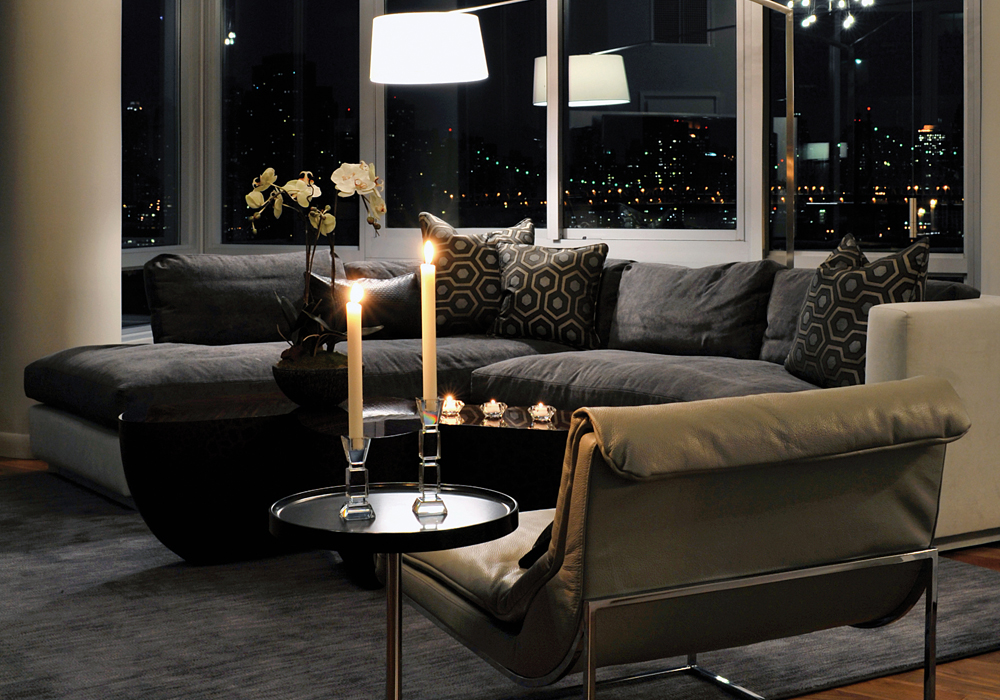 Potted plants were strategically placed throughout the penthouse to balance out the masculine design.

The powder room is the smallest of the four bathrooms in the three-bedroom duplex. Cevasco once again threw out the builder’s original design to enhance the diminutive space and add dimension. She installed glass mosaic tile on the feature wall and a bright white vanity that’s more sculpture than sink. “We wanted to keep it visually interesting.”

Balance and cohesiveness were the ultimate design elements for achieving this modern, masculine penthouse with a priceless skyline view. “When you walk into any well-designed space, you should feel comfortable and that there’s a sense of continuity between the interior and exterior and that you’re not in an overly designed room, that is where the success lies.”