The Academy Awards honor the best performances and feats in film, but the big screen isn’t the only place the drama takes place. The Oscars red carpet is like the Super Bowl of fashion with jaw-dropping couture taking center stage. These 11 most memorable Oscar dresses of all time make Tom Brady’s comeback in this year’s big game look like child’s play.

Black tends to be a boring pick for a red carpet dress, but not when Angelina Jolie rocks it while flashing some serious leg. Jolie’s Atelier Versace gown came with a slit that left just the right amount to people’s imagination and still has everyone talking.

Not that Charlize Theron needed a South American getaway to look any more gorgeous, but her pre-Oscars trip to Brazil gave her a summer glow in the dead of winter in 2004. Her tanned skin fared perfectly with a sparkling gold Gucci Gown—and the trophy she picked up for Best Actress for her role in Monster.

Halle Berry made history in 2002 when she became the first black woman to win “Best Actress” and she looked damn good doing it. The Elie Saab number featured sheer top with strategically placed floral embroidery, a gamble that paid off in head-turning fashion. Fun fact: Berry also became the first star to take home an Oscar wearing a Lebanese designer.

Just when you thought you’d seen it all on a red carpet, Bjork showed up in a swan dress so iconic it has its own Wikipedia page.

Chartreuse, a high side slit and floral embroidery sound like a combination for the worst dressed list, but Nicole Kidman wore this Dior gown in 1997 and subsequently upped the bar on red carpet couture dressing. The design wasn’t the only risk Kidman took that night—she gambled on the designer, too. The Asian-inspired shift was part of John Galliano’s debut couture collection for Dior. He may want to send her a dozen roses for the dresses’ 20th (yes, 20th) anniversary this year. 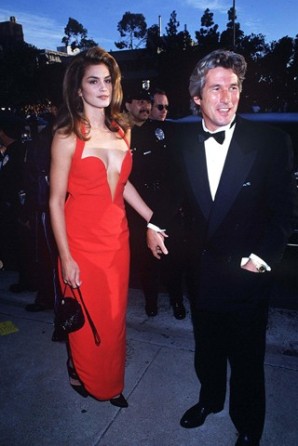 The 63rd Academy Awards marked the first time Richard Gere and Cindy Crawford walked the red carpet together—but all anyone remembers from that evening is supermodel Crawford’s red Versace gown. The color and plunging neckline rendered sparkly jewelry unnecessary and was so popular, retail chains began producing copies of the dress.

Miffed she did not get an Oscar nomination for her role in drama Mask, Cher proved wearing a Bob Mackie mid-drift baring dress and feathered headdress are the best revenge. Two years later, she won Best Actress for Moonstruck in another off-the-sparkling-beaten-path Bob Mackie gown.

This 70s hair icon outdid herself when she rocked a gold body-skimming gown to the 1978 awards show, where she served as a presenter. Gorgeous tan and trademark ‘do in tact, Fawcett was hands-down the night’s golden girl.

Never one to shy away from unique, Barbra Streisand rolled up to the 41st Academy Awards in sheer Scaasi pajamas. You could say she’s ahead of the trend—as wearing pajama-style clothing for a night out and even work has been en-vogue in recent years. Streisand also made waves by tying Katharine Hepburn for the Best Actress award, the only time that’s ever happened.

Grace Kelly’s ice-blue French satin Edith Head design looked gorgeous against her fare skin and strawberry blond hair. The Oscar for best actress for her role in Country Girl made for the perfect statement accessory.

Be sure to check in to lipulse.com on Monday for a recap of this year’s most gorgeous gowns and jaw-dropping moments.