A photo in the exhibit Danny Lyon: Memories of the Southern Civil Rights Movement at Hofstra Museum perfectly captures the best element of that cause.

Taken in Birmingham, Alabama, in 1963, the image features a black woman holding an American stick flag. Her face evokes anger tempered by grief while she stands with fellow members of the Student Nonviolent Coordinating Committee (SNCC) at a funeral. Four teenage girls were killed by a Ku Klux Klan-planted bomb at a Baptist church. The woman holds the stick upright with both hands as if trying to hold tight to the flag’s symbolism and her fragile belief that the nation may one day uphold consistently the true meaning of its creed.

Lyon also recognized, at least implicitly, that America was founded explicitly on certain core ideas. That each individual has the inalienable right to life, liberty and the pursuit of happiness and is equal before the law. That government is instituted to secure these rights for all, is blind to such irrelevancies as skin color, and judges instead by the content of a person’s chosen character.

Brooklyn-born, Queens-bred and white, Lyon was a 20-year-old history major at the University of Chicago when he packed his Nikon and Leica cameras and hitchhiked to the deeply segregated South to document the Civil Rights movement in the summer of 1962. Soon after the photographer settled in Albany, Georgia, he landed in a jail cell next to Martin Luther King Jr.

Lyon joined and embedded himself with the Atlanta-based SNCC, a national group of college students who organized in 1960 after staging a sit-in at a North Carolina lunch counter. Eventually, he was named staff photographer, a post he held until 1964 when he moved on to other projects.

The exhibit at Hofstra’s Emily Lowe Gallery leads museum-goers through many events, from the Black Monday protest in Danville, Virginia, in 1963 to the March on Washington later that year. The 50 black-and-white images are a mix of actions and moments showing combative crowds, contemplative individuals, voter registration campaigns and a choir singing hymns to freedom. 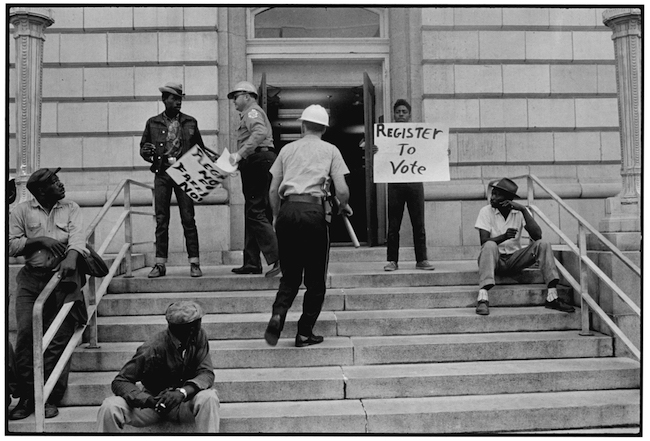 There are snapshots of famous figures, such as MLK before giving a speech in Birmingham and Bob Dylan strumming an acoustic guitar outside the SNCC office. But most feature unsung heroes, including peaceful protesters who faced force from police and National Guard, and those who formed long lines to gain entry to “all white” public institutions.

“If you look at the faces in these photographs and the bodies which Danny Lyon captures so beautifully, it’s not just Martin Luther King and John Lewis, faces that we may know,” Nancy Richner, director of the museum, said at the opening reception for the exhibit that runs through April 13. “It’s the individual faces of those we don’t know but whose actions helped change our country.”

SNCC used Lyon’s realist and raw photos to print posters, fliers and brochures to raise awareness and funds for their cause. Other images were published in newspapers and a documentary book entitled The Movement. One photo shows several young women held in a jail cell without charges in Leesburg, Georgia.

“[M]y pictures actually accomplished something,” Lyon is quoted in a label for this snapshot. “They had gotten people out of jail.” 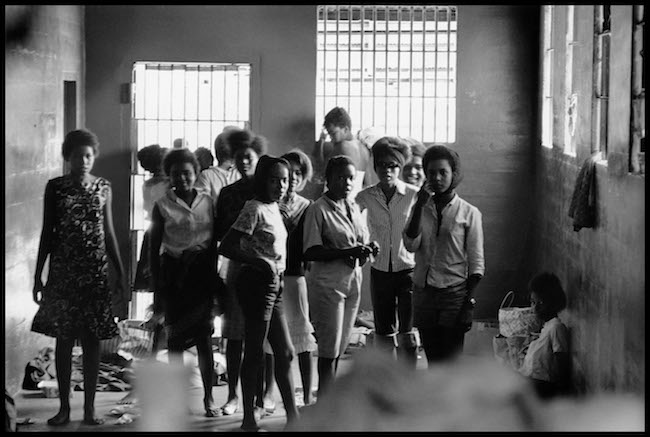 Danny Lyon: Memories of the Southern Civil Rights Movement is a traveling loan exhibit provided by Art2Art Circulating Exhibitions. Hofstra Museum’s permanent photography collection features Lyon’s images from other projects, including his profile on the Chicago Outlaws Motorcycle Club. Karen Albert, the museum’s deputy director and chief curator, said her staff chose the Lyon exhibit three years ago because of their familiarity with him, as well as for its theme.

“We didn’t realize quite how timely it was going to be,” Albert said about the exhibit that opened in January. “We work three to four years in advance. It’s a timely issue about civil rights and protests. It just kind of happened that it became a major issue leading up to having the show.”

Lyon has been compared to Robert Capa, the renowned 20th-century war photographer. Lyon helped capture a movement that, while philosophically mixed and flawed, serves best as another example of persecuted people demanding that fellow Americans live up to their nation’s ideals enshrined in the Declaration of Independence and the Constitution. The latter document, for all of its brilliance in protecting individual freedoms—including freedom of speech and the right to peaceably assemble—also originally upheld slavery. But thanks in part to American abolitionists, including escaped slave Frederick Douglass, that contradiction culminated in the Civil War and slavery’s eradication.

“They are wonderful works of art that speak to us today,” Richner said of Lyon’s impactful photos. “They link, I think, the past to the present, the artistic to the political. And, they really still live today.”