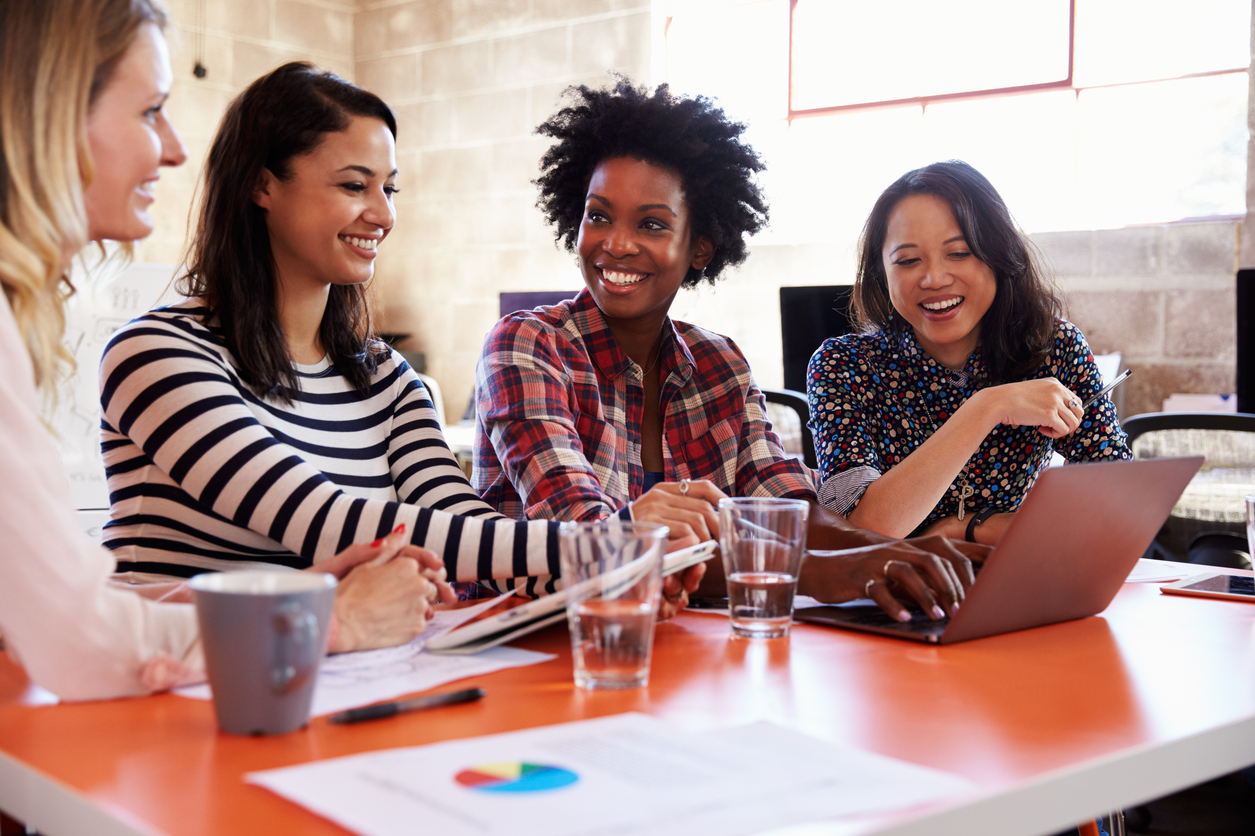 Women-only spaces can be a refuge, but are they beneficial? image: monkeybusinessimages

When she began her career in academia in 2009, Loyola University professor Karsonya Wise Whitehead grew tired of getting ignored and interrupted by men on academic committees. “When I would make comments in the meetings, nobody would react; someone would repeat my comment as if it were his own and people would engage in conversation with him,” she recalled.

In hopes of finding a space for two-way conversations, Whitehead joined the National Women’s Studies Association (NWSA), a women-only organization. “My voice was recognized and appreciated in ways it wasn’t in spaces that were filled with men,” she remembered. “You don’t have this extra pressure of gender stereotypes. You don’t have to deal with the gendered work we have to do to establish ourselves.”

From colleges and conferences to informal gatherings and social clubs, women-only spaces and events let members express themselves without fearing men’s reactions. These venues also aim to reduce the discrimination women face in mixed-gender arenas. Sixty-five percent of women report having been catcalled while walking on the street, according to a Stop Street Harassment survey, and 54 percent have experienced harassment, said an Association of Women for Action and Research survey.

When they grew popular in the 1970s, women’s parties and political meetings became sexologist Carol Queen’s refuge from unwelcome sexual advances and condescending talk. They also helped her connect with other LGBT women. “‘Women-only’ was not always a code word for ‘lesbian,’ but it sometimes essentially worked that way,” she said, noting that even then, sexual harassment was rarely an issue.

These days, they appear to be making a comeback. The Wing opened late last year as Manhattan’s first all-female coworking and social space. The organization Boston Feminists for Liberation became a women-only space one year ago in response to female members being taken advantage of and sexually violated by male members. “You don’t realize how much energy you spend on addressing internal problems caused by men,” said organizer Nicole Sullivan. “We have gotten more done in the last year of being women-only than the past four years combined because our energy can now be directed outward.” The group has been able to build a coalition to shut down pregnancy crisis centers, which counsel women against abortion, and publish small, handmade magazines known as zines.

Data supports claims that women are more successful in gender-exclusive spaces. In the U.K., women found female-only gatherings helped reduce fears for their safety, according to a 2015 study in Sociological Research Online. Several said they were better able to talk about their experiences with sexism and abuse without worrying that men would get defensive. Others appreciated that they didn’t have to keep their eyes on their drinks. “I can just relax,” one said. “I [do not have] to look over my shoulder.”

Adults aren’t the only ones who stand to benefit from separating genders. Multiple studies have shown that students in all-girls schools tend to get better test scores, including a UCLA report that found that attendees spent more time studying, did better on SATs and felt more confident in their mathematical and computer skills.

Is escaping men a double-edged sword?

But women-only spaces are not without flaws. Since women have to work, socialize and walk the streets with men in their daily lives, spending most of one’s time in a gender-specific arena can be viewed as akin to living in a bubble. A McKinsey report found that companies with more gender and racial diversity bring in more revenue.

And when the goal is to highlight women’s accomplishments, allowing only women could mean preaching to the choir. It’s why Awake Studio founder Abby Wake let men into the audience of her open mic in LA, though only women were able to perform. “Men who have come and supported the women in the space acknowledge and appreciate the importance, which makes it even more special and sacred,” she said.

But most experts say that as long as the time spent in women-only spaces is temporary, it will not compromise women’s abilities to handle sexism or male perspectives.

“Spending time in a woman only space is like a recharge,” said Arleana Waller, founder of the women-only social club ShePOWER Socialites.

What does catering to women mean, anyway?

When creating an atmosphere and deciding on decor, founders of women-only spaces must tow a fine line between making a place desirable and only furthering stereotypes.

The women’s coworking space and business accelerator Hera Hub, for example, advertises itself as “beautiful” and “spa-inspired” with candles and “calming colors.” Virginia McCarver, Ph.D., a former communication and women’s studies professor at Metropolitan State University of Denver and founder of the women’s issues-focused communication firm Gavia Strategies, finds these types of descriptions troubling.

“Spaces focusing on amenities such as a ‘spa-like environment’ or offering manicures and pedicures on-site to attract women…[reinforce] gender bias and [continue] to fix women in the ‘glass box’—a space where they can see the opportunities around them but cannot access them due to lack of support and resources,” she said.

McCarver thought hard about this when she founded Women in Kind (WinK), a women-only workspace in Denver. She determined that striking a balance meant relying more on research and less on stereotypes. In lieu of throw pillows and mani-pedis, her space boasts a mentorship program because women prefer to work as a team, according to a National Bureau of Economic Research study. She also chose to set up an on-site daycare center, as a Bureau of Labor Statistics survey showed women with young children spend more than double the time men do on childcare.

Though McCarver admitted that even these accommodations don’t apply to all women, she would prefer to allow them to have these options rather than ignoring their needs like mixed-gender arenas might.

What about the LGBTQ+ community?

Though women-only spaces tend to be billed as a refuge from patriarchy, some activists fear they only further it. They have a history, for example, of excluding transgender women. In 1991, a trans woman was kicked out of the Michigan Womyn’s Music Festival (also known as MichFest) on the grounds that only “women-born women” were welcome. Under the festival’s policies, “women” were people assigned the female gender at birth.

“Cis-women-only spaces are an attempt to exclude a specific minority subgroup of women— i.e., trans women—and therefore, they are just as discriminatory as a straight-women-only or white-women-only space would be,” said Julia Serano, the author of Whipping Girl: A Transsexual Woman on Sexism and the Scapegoating of Femininity who protested MichFest. Though trans women continue to feel excluded from women’s sports teams, bathrooms and colleges, Serano has seen many women’s spaces become more accepting.

Some have even expanded to include non-binary people, those who don’t identify as men or women. The logic behind this policy is that since these spaces aim to help those who are marginalized because of their gender, all marginalized genders should have access to them.

Lux Alptraum founded Out of the Binders to support women and non-binary writers. Its conference and Facebook group’s membership requirements are based on power, not biology. The goal, she said, “isn’t exactly about women as much as it is about people that don’t benefit from male privilege—which is primarily women, but it’s also people who don’t necessarily identify as women but still are held back in the workplace.”

Designating safe spaces for more than just women opens even more questions about who belongs. The women’s college Wellesley, for example, also allows trans men if they entered while living as women. Alpatrum lets trans men make this call themselves based on whether they feel they benefit from male privilege.

Safe spaces, then, have largely shifted from spaces for women to spaces for all disadvantaged genders and sometimes even their allies.

Whitehead has come to value women-only spaces even more since Trump took office. Fearing what messages girls might pick up from living under a leader who has boasted about sexual harassment, she started “Resistance Teach-Ins” for middle school, high school and college girls. The Teach-Ins allow attendees to talk about consent, understand their rights and learn how to mentor others. At the students’ requests, she made them women-only. “They sometimes feel silenced by the boys in their class,” she said. “And on this issue, they did not want to be silenced.”

When Trump was elected, she said, it “became quite clear that now more than ever, these spaces were needed to vent, to heal, to organize, to meet, to feel safe, to remind each other that we are still here, to be blankets of protection for one another, to be allies, to not feel defeated and to remind ourselves that we have a voice.”