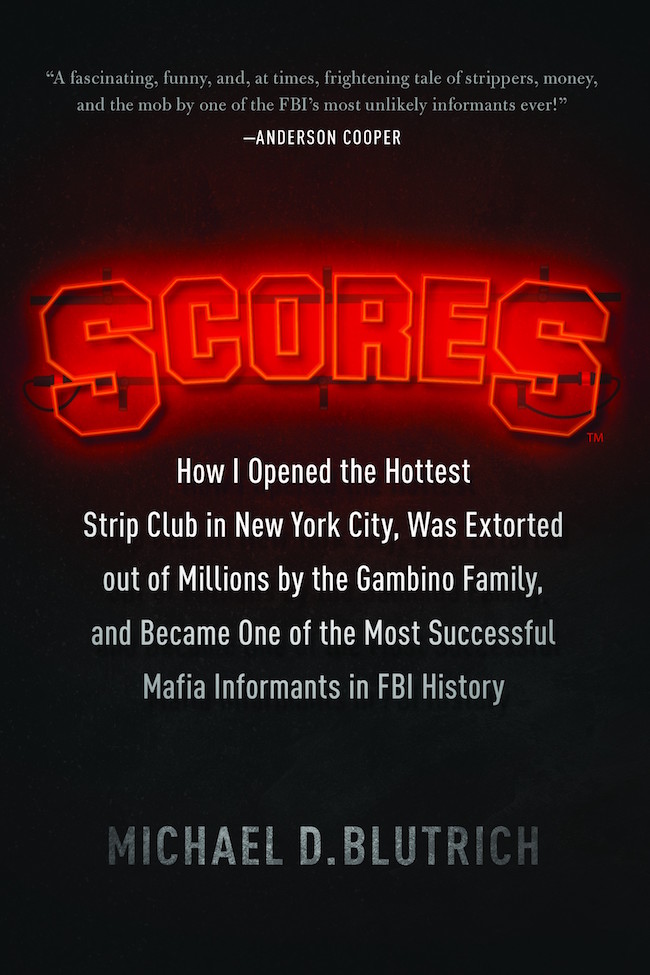 “Scores: How I Opened the Hottest Strip Club in New York City, Was Extorted Out of Millions by the Gambino Family, and Became One of the Most Successful Mafia informants in FBI History” by Michael D. Blutrich / c.2017, BenBella Books $26.95 / $37.50 Canada 328 pages

“I’m telling!” If you were ever a child, that whine is familiar to you. It indicated a tattletale nearby, a secret spilled to Mom and somebody about to be in trouble.

Annoying as it was, “I’m telling” never hurt much more than your pride then. Today, as in the new book “Scores” by Michael D. Blutrich, serious snitching could get a guy killed.


How does it happen that a gay man would own a mainstream strip club?

It was, said Blutrich, a long story that started after he opened his law firm and, in search of an investment, purchased an L.A. nightclub. Believing that the success of his California business could transfer to New York, he recalled the excitement of a private banker who claimed he’d always wanted to own an upscale strip club.

Being a closeted gay man, that wasn’t exactly Blutrich’s dream but the idea niggled at his brain. Partnering with the banker and others, they began looking for a building and batting ideas around.

Scores was born, with a planned opening on Halloween night in 1991.

“And then the mafia arrived.”

In order to operate, the partners were told, they would need “protection,” which would involve some of New York’s biggest mafia families in a sort of symbiotic relationship, plus a grand-a-week kickback. It would also involve skirting Big Apple laws for as long as possible, because Scores would be the city’s “first and most notorious upscale gentlemen’s club” and there were rules against what a customer would find inside those Upper East Side doors.

Because of the novelty and the entertainment it offered, Scores was successful–more successful than Blutrich had ever thought. He rode a wave that made him a rich and semi-famous man–at least, until the FBI caught up with him and made him an offer he couldn’t refuse.

And, of course, that’s far from the end of the tale. What’s left to say about “Scores” involves rompishness, humor, surprisingly heart-pounding chapters, a little Goodfellas, a little Boogie Nights and quite a bit of fun.

That last appeal comes in the form of overgrown tales, courtesy of the author’s memories of what happened inside his gentlemen’s club every evening for nearly five years. Readers who remember the most infamous discos of the 70s will find something familiar in that, updated to the 1990s but no less outrageous.

But this book isn’t all party: Blutrich delightfully drops names, including many you’ll recognize, but he’s deadly serious when he switches his tale from wild to wired, from dancing to danger. Indeed, though you know the risk has largely passed–he wrote a book, after all, right?–the whole of the story is one you’ve got to read.

There’s an amazingly small amount of profanity and prurience inside this book; it’s there, but not as much as you’d think there’d be, given the subject matter. That restraint uniquely serves to enhance this book, and heightens the story’s value. And that makes “Scores” a book you’ll want to tell everyone about.