It’s difficult to imagine a more perfect match of filmmaker and subject than master director Terence Davies and legendary poet Emily Dickinson. For more than 30 years, Davies has been crafting exquisite dramas (The Long Day Closes, The House of Mirth, Sunset Song) while exploring the lives of people struggling against the strictures of social rules and mores. It’s a subject he knows intimately as a gay man who grew up in staid, buttoned-down 1950s England, when homosexuality was both illegal and abhorred. Davies clearly found a kindred spirit in Dickinson, a great artist who wrestled with the deeply limiting expectations placed upon a woman in a very proper 19th century Massachusetts family.

The film begins in 1847. Seventeen-year-old Emily is a student at Mount Holyoke Female Seminary and her quietly rebellious nature is already evident. When the students are told to separate themselves into those who are “established Christians,” those who “expressed hope” and those who are “without hope,” Emily is the only one to profess being “without hope.” Unsurprisingly, her time at Mount Holyoke proves brief and she returns home, a place that is both comfortable and constricting. Her highly respected lawyer father Edward Dickinson rules the family with a strong hand, rigidly laying down the many social obligations expected of Emily and her siblings. 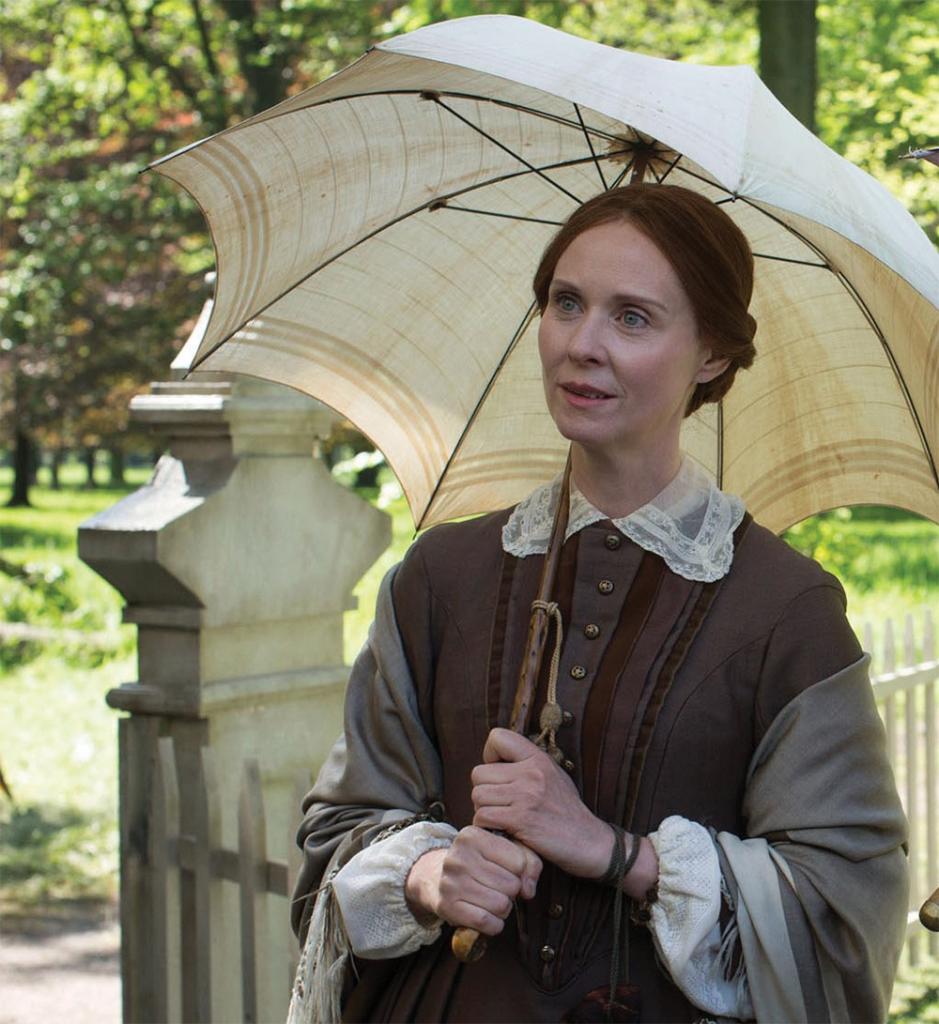 Davies vividly traces Emily’s journey from dutiful daughter to dedicated artist. There are moments in the first half of the film that feel oddly superficial as Davies adopts an overtly theatrical style that mirrors Emily’s use of witty banter in a facile attempt to connect with society, then the movie relentlessly grows in strength as Davies’ directorial approach becomes increasingly poetic, reflecting the intensity of Emily’s retreat from the world to focus solely on her writing. As the film nears its shattering climax, the director finds an exemplary musical accompaniment in the haunting tones of “The Unanswered Question” by composer Charles Ives (another New Englander), who also struggled to balance art and life.

Davies has assembled an excellent cast (Keith Carradine is especially strong as Edward Dickinson), but this is a film that totally rests on the shoulders of the actress playing Emily. In a role that couldn’t be further from the glamorous character that made her a household name in Sex and the City, Cynthia Nixon gives a brilliant performance that powerfully captures the complex mixture of rebelliousness, spirituality, yearning, loss and determination that drove Emily Dickinson to dedicate her life to poetry.

Although almost none of her nearly 1,800 poems would be published during her lifetime and it would take until 1955 for the publication of a complete edition of her work, Emily Dickinson is now considered one of the greatest poets of all time. Driven by her overwhelming desire to create, Emily Dickinson gradually shut herself off from the world. With A Quiet Passion, Davies has opened the doors and allowed us to rediscover the fascinating woman behind the unforgettable words.