With a certain slant of light, the birds and butterflies in artist Carson Fox’s “Blue Sky Pursuit” seem ready to take wing. The sun glistening through transparent beads on the painted glass illuminates possible flight patterns. Or do they signify migration maps, memories or messages from the past?

“One of the things I was thinking about was how we’re commuting back and forth all the time,” explained Fox, an associate professor of visual arts at Adelphi. “I chose butterflies and birds in particular because I was thinking about their migration habits and a correlation between commuters and animals. Another reason is the way the station platform is situated…you’re kind of up in the air, so I wanted to bring that feeling of the sky.” She also alluded to less apparent presences. “I was thinking about the history of commuting and how many people have used that station. We have this common history with a bunch of strangers. It’s almost like thinking about ghosts that have occupied the space.”

Looking at the work and deciding what it means takes time. But it doesn’t take a trip to a gallery or museum. It’s on display at the Seaford LIRR station. Fox’s art typifies the kind of work the MTA Arts & Design program offers Long Islanders. Falling under the MTA’s Percent for Art budget, which is funded by the MTA Capital Program, one percent of the first $20 million approved for each construction project is set aside for art. Similar programs exist all over the country and New York City’s, which was adopted in 1982, was so successful that in 1985 the MTA started its own. Now, beautiful, accomplished, uplifting, thoughtful and often playful artworks grace locations throughout the New York transit system, including 17 specially commissioned for LIRR stations that reflect the community, travel and life on Long Island. 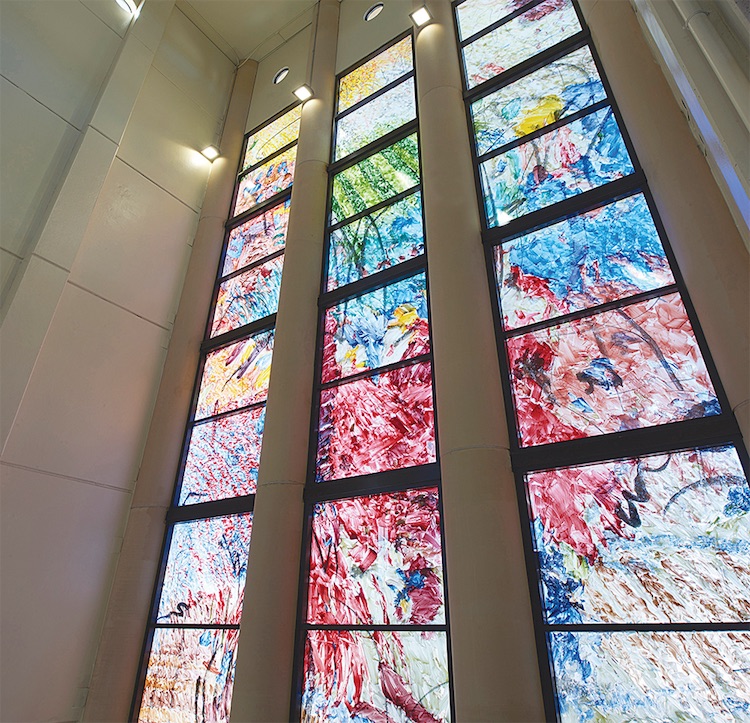 The MTA program began 32 years ago, and for 29 of them, director Sandra Bloodworth has been working to enrich travelers’ daily lives. “Art included in the transportation environment is powerful,” she said. “It makes a difference in a place, and it speaks to that place. It connects people to their neighborhoods and communities.” Hundreds of artists have submitted designs over the years, hoping to display their work on Long Island. Before they’re selected, Bloodworth and her team bring artists to the site. “We try to ground them in the place, and then out of that, their vision is going to speak to that place. It could be abstract. It could be conceptual. It could be realistic…It could be anything, but they must be mindful of who they’re creating this work for.”

“The Huntington station is my favorite,” said Eileen Palmer, a St. James based mosaic artist. In Huntington, Joe Zucker’s 130-foot long, brilliantly colored glass composition filled with Island symbols like a duck, lobster, sailboat and Montauk’s lighthouse, spans the station. Zucker, an East End artist, created “For My Grandfather Noye Pride, a Locomotive Engineer” in 1998. “I just love the way light goes through the glass. I think there’s something magical about that,” Palmer added. “I also love the way he’s taking part of his history, and he shared it with the beauty of his art.” Another artist mining his past for inspiration is Garden City native Peter Drake. Parts of his “Waiting for Toydot,” a whimsical tile and glass installation at the Massapequa station, can be seen from Sunrise Highway below. An anachronistically dressed conductor, travelers and a little dog hearken back to the artist’s memory of waiting for his father to come home on the train every evening. 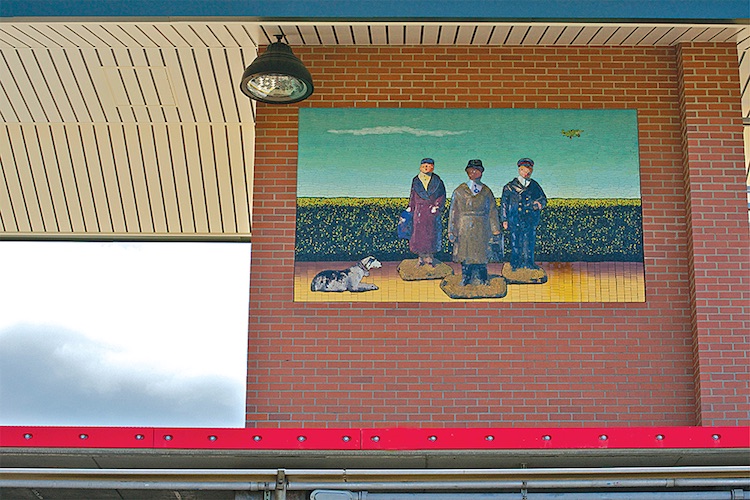 Senior manager of the MTA program, Lester Burg, who grew up in East Meadow, spoke of Wyandanch’s new soaring, five-story-tall glass wall transformed into an ebullient abstract painting by Moe Brooker entitled “Just Jazz.” It fronts the commuter parking garage and was installed in 2015. “In Wyandanch,” Burg said, “we got to do something that was really big, and bold, and expressive, and colorful and inspired by jazz. And of course the community is home to jazz musicians. In Dix Hills, John Coltrane’s home, there’s a museum, and the artist was aware of that.” Brooker’s work often hangs in museums. Here, he’s covered 28 panels of glass with expressive brushstrokes in emerald green, turquoise and red, punctuated with black lines that add a sense of rhythm and syncopation.

“We’re doing art in the transportation environment. That is a tough thing in anybody’s book,” Bloodworth explained. “The focus is about pulling that off, about commissioning work that community embraces and yet is high quality art.” The response, she said, is the reward. “That’s why we’re here thirty years later. Because from the beginning the public knew this was being created for them.” 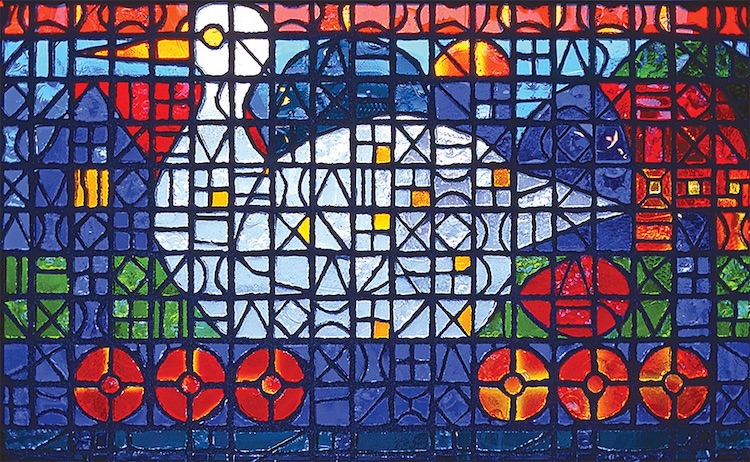 Bleary-eyed, caffeine-toting commuters may not make the most appreciative audience for the mysteries expressed in art, but they may need it more than most. “Art helps to make you present,” Bloodworth said. “Whether you’re having a bad day or you’re absorbed with your email, you can experience it while you’re doing those things and hopefully, it engages you.”

The MTA Arts & Design program also includes music, performances and poetry. Even MetroCards deliver inspiration; they’ve featured poems by Billy Collins, Maya Angelou, Gary Snyder, Ntozake Shange and Seamus Heaney. Another branch of the program, Poetry in Motion, joins artworks with poetry on posters that can transport travelers in more ways than one. “Whoever you are come travel with me!” Long Island’s great poet Walt Whitman wrote. “I swear to you there are divine things more beautiful than words can tell.” Some of them might be as close as your local train station.