The Village of Mineola has been quietly transforming itself into a transit-oriented powerhouse of young professionals. Within the past decade, the Nassau village located a mere 25 miles east of New York City has come into its own as a locale for restaurants and as a regional employment hub. Situated in close proximity to the newly expanded Winthrop Hospital and one of the busier LIRR stations, the village seems to be ready to welcome a new generation establishing itself in the workforce.

Related Content: The Future of Transit on Long Island

At the center of this rebirth sits Modera Mineola, a luxury rental community that rose from a two-acre parcel on the corner of Old Country Road and Willis Avenue after Dallas-based Mill Creek Residential purchased the site in 2013. Mill Creek, one of the nation’s leading apartment investors and operators, took advantage of the village’s innovative incentive zoning bonus program to meet the growing demand for amenity-rich, transit-oriented apartment living on the Island. Offerings for tenants at the 275-unit complex include a studio for $2,270 per month, what the developer calls a junior one-bedroom that is $2,440 per month, a one-bedroom with a loft for $2,800 (a popular option for young professionals) and a series of two-bedroom options that range from $3,525 to $3,850 per month. 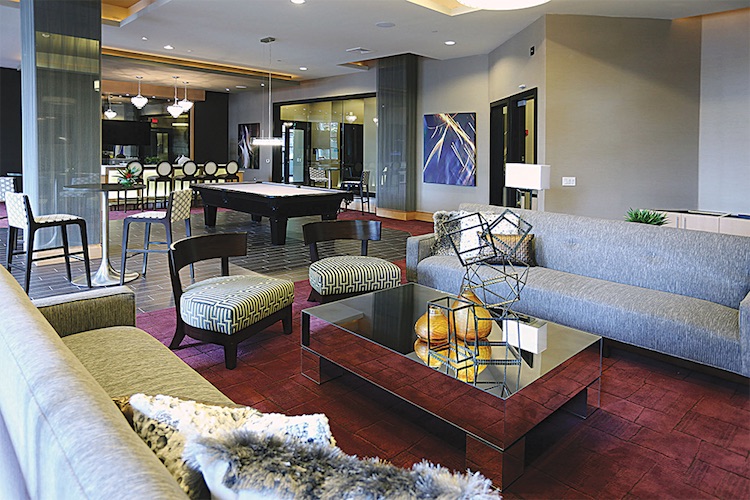 According to the developer’s senior community manager Danielle Crane, the project’s success is evident in its low vacancy rate. The building was open for move-in in September 2015, and was essentially fully occupied by December 2016. Modera is particularly popular with the younger generation, according to Crane. An estimated 45 percent of its residents are ages 18 to 35. Twenty percent are older than 55, she said, pointing out that the two groups, young professionals and empty nesters, are key demographics. For Crane, Modera Mineola offers “something for everybody,” noting that residents have come from all over—both from Long Island and beyond. She stressed it’s the amenities that attract residents to the luxury building, including access to a clubroom with nine 55-inch flat screen televisions, coffee bar, billiards, shuffle board and an outdoor community court with fireplaces and barbecues. “Residents simply love it,” Crane said. “In an apartment, these amenities become an extension of your home.”

While the project’s design allows residents to embrace a transit-oriented lifestyle, the builder does provide three levels of structured parking. “Most residents have a car. While residents use the train, this is still Long Island. Many want the option of a car for the weekend.” Given the demographics of the building’s residents, Crane noted that there aren’t too many young children who live in the development—a common concern residents raise when any dense project is being proposed. According to Nick Halstead, a development associate with Mill Creek Residential, the village embraced Modera. So much so, that according to a 2013 article in The New York Times, the municipality allowed the project to exceed historic height limitations in exchange for improvements to sidewalks, the planting of additional trees and the installation of lampposts.

To some, the changes to Mineola are much needed. Halstead believes this was the ideal location for the company to expand their efforts. “Mineola has a lot of local attributes including an existing downtown and frequent train service to New York City,” he said. Halstead gave praise to the village for what he called their “progressive zoning” that “offered a blueprint for growth moving forward.” When asked if this model would work east of NYS 110 in Suffolk County, Halstead stressed that residents of Nassau County are used to higher density. “Transit-oriented growth in Nassau tends to be more dense. In Suffolk, this level of density requires a whole different level of approvals.” 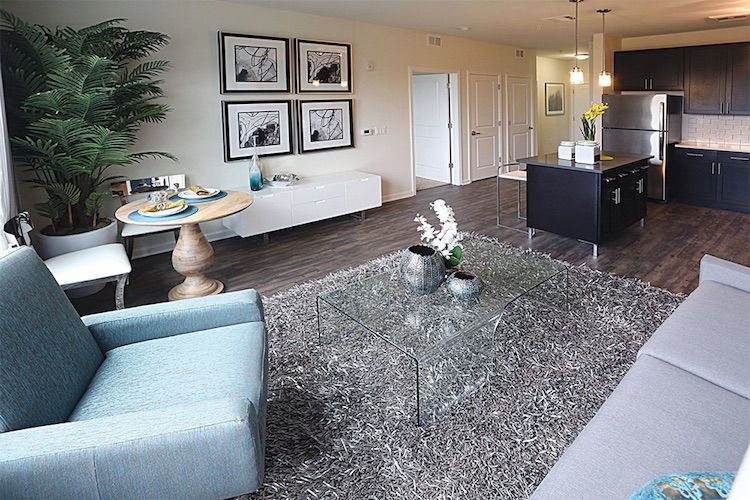 If any company is accustomed to navigating the nuanced framework of development on Long Island, it’s Mill Creek. First proposed in 2007 by another developer, Modera is the byproduct of years of effort and evolution. Initially named The Winston, Mill Creek took over the project in May 2012 and broke ground in Sept 2013. The renamed Modera Mineola sits alongside Hudson House, Mill Creek’s previously existing 36-unit senior living facility, as well as countless other real estate projects within the small municipality that have altered the area’s unique fabric. Prior to completion of Modera, the development firm previously completed two other buildings: Metro 303 in the village of Hempstead and West 130 in West Hempstead.

According to local reports, the village of Mineola has seen the creation of roughly 900 or so apartment units in recent years and more are on the way. Among those slated to be built, Mill Creek is planning to break ground on a new 192-unit apartment building in the immediate area. “The village charted the course of growth, and there was very little pushback since this project was in the spirit of the rezoning,” Halstead said. Time will tell if Mineola’s success can be emulated in other areas of Long Island, but for now, the village is blossoming. “The village now has the framework—it’s important to now coordinate efforts and look forward,” Halstead stated.