The opening of the Jake’s 58 Casino in the Village of Islandia, a tiny municipality that was incorporated in 1985 and spans a mere 2.2 square miles, came with a policy decision that has created big repercussions for the area’s neighboring townships… and the region as a whole.

Are both the Suffolk County Off-Track Betting Corporation, a quasi-governmental entity known for its fiscal troubles and patronage hiring more than anything else, and this small village prepared if their gamble doesn’t pay off?

Related Content: The Future of Transit on Long Island

The answer is not likely, a red flag that showcases weaknesses in Long Island’s patchwork quilt of strategic developmental thought.

Jake’s 58, the new name for what was formerly known as the Marriott Hotel with 278 rooms, is the product of years of controversy. Initially, the OTB had their sights set on a vacant 32-acre site that formerly housed a multiplex in Medford. The fledgling agency tried to supersede local zoning to get a new gambling facility approved and built, an approach that wasn’t well-received by locals.

After delays, community opposition, lawsuits and handwringing from the Town of Brookhaven, a federal bankruptcy court ruling that essentially forced both the town and county to allow the project to move forward empowered the OTB. But by then it didn’t matter—Islandia’s leadership welcomed the OTB with open arms. Delaware North, the casino’s owners and operators, were happy to move forward as well, and presented village leadership in February 2017 with two checks totaling $2,532,400.

At the time, village mayor Allan Dorman touted the casino’s fiscal benefits to residents in a statement to the media, pointing out that the village reduced taxes by 25 percent in 2018 and promising another 25 percent reduction in 2018. He continued: “This, combined with the village’s continued elimination of a garbage tax, saves residents about $700 a year. This is money in your pocket. This agreement will protect the financial security of the entire village. Business owners will also get this tax relief and enable them to expand their business needs in Islandia that creates much-needed jobs for local residents.” 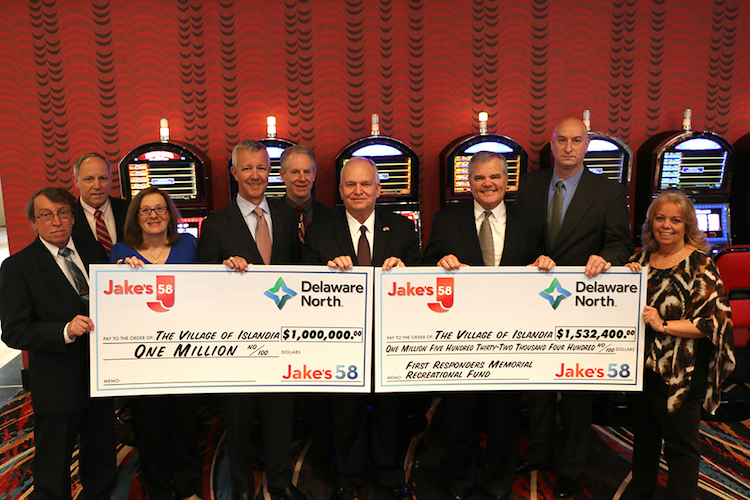 image: the incorporated village of islandia

The village’s decision reflects the push for local benefits over the regional good. On Long Island, local municipalities have what’s called “the police power” over land use, or the government’s ability to regulate or enforce not only what is built in a particular location, but how it’s built as well. Zoning is a powerful tool that can stimulate economic growth and enable environmental protection, but when it is misapplied, there can be harmful impacts that can resonate far beyond a village or township’s municipal borders. If village governments, often bastions of home rule land use policies, continually act in a vacuum, we will see select municipalities benefit while other entities do not.

When a region has as many layers of government as Long Island does, you’re bound to get a few lemons of policymaking now and then. From the Village of North Hills making the decision to demolish Inisfada, a mansion that the Manhasset Press called a “fabled 19th century edifice,” or the protection of various outdated power plants to keep taxes down in places such as the Villages of Port Jefferson or Northport, to the implosion of the relatively recently created Village of Mastic Beach, some villages fare better than others when it comes to substantive governing.

Many were incorporated for the self-interest of their residents, either to reap the benefits of tax relief brought about by a shopping mall, like what Lake Grove did in 1968 as the Smith Haven Mall became a larger commercial center, while others sought to maintain their “quality of life” and have local control over who builds what where, as many of the smaller villages did on Nassau County’s North Shore.

Villages aren’t always bad. One just has to look at the Villages of Patchogue or Mineola, where their local control helped them shape their futures by accelerating their own growth and nurture dense mixed-use projects that wouldn’t have likely been approved elsewhere. Villages on Long Island have become so successful in nurturing development that developer-friendly groups like Vision Long Island often praise their ability to get projects approved.

Meanwhile in Islandia, the downsides of local control are on full display.

The casino is struggling to get its parking situation under control, the pangs of growth have seemed to hit harder than previously thought and things may get worse. According to reports by CBS 2 New York, Jake’s 58 isn’t even fully built out—the first phase, which opened late February, included 265 video lottery terminals, and officials have told local media that 735 more machines will be added by the summer. The pending expansion is driving local concerns about the casino’s impact on quality of life in the surrounding area.

Even worse, the taint of nepotism is creeping its way in. Newsday‘s Rick Brand recently reported that the brother of Suffolk OTB Corp.’s vice president was given a job as operations supervisor at the new casino. This sort of thing isn’t surprising given the OTB’s reputation for insider deals and political patronage, but the appointment adds fuel to an already controversial fire, doing little to restore the public’s faith that policy decisions are being made with their interests at the forefront.

Unfortunately, there are no easy solutions to be had. While municipal consolidation is always discussed in op-ed columns and panels, it is not a realistic prospect in this region at the time thanks to a devout loyalty to home rule. With the exception of Mastic Beach, and the small village of Pine Valley, a small village in the Town of Southampton which dissolved itself in 1990 after a mere three years of its existence before that, most villages on Long Island are here to stay.

It will take one or two progressive village governments to realize the benefits of sharing resources, knowledge, as well as collaboratively working with their neighbors to ensure their policies don’t have negative impacts that echo across Long Island.

In the case of Islandia, time will tell if this small village’s decision to allow Suffolk OTB’s casino has impacted the rest of Long Island in a big way.