When Donald Trump and Mike Pence promised to defund Planned Parenthood on the campaign trail, it wasn’t rhetoric.

Once in office, they moved quickly to make good on their promise by supporting Speaker Paul Ryan’s American Care Act, which called for defunding Planned Parenthood for a year. On Friday, March 24, the proposal failed to get enough support from republicans and democrats alike and Planned Parenthood received a reprieve. Six days later, on Thursday, March 30, Senate republicans did an about-face. They voted to reverse an Obama administration action that prohibited states from withholding funding from Planned Parenthood affiliates. Pence cast the deciding vote. Trump is expected to sign the measure. It could deliver a crippling blow to the nation’s largest single provider of reproductive health services.

As of 2016, one in five women access services from Planned Parenthood during their lifetimes. “I don’t know where the patients in this community would go for care [if Planned Parenthood does not exist],” said Elizabeth Schmidt MD, the medical director at Planned Parenthood of Nassau County, Inc., which saw 13,000 clients at its centers in Hempstead, Glen Cove and Massapequa in 2016. “We are the safety-net provider for the safety-net providers,” she added, referring to patients who use Medicaid and Medicaid Managed Care, which a large portion of doctors do not accept. 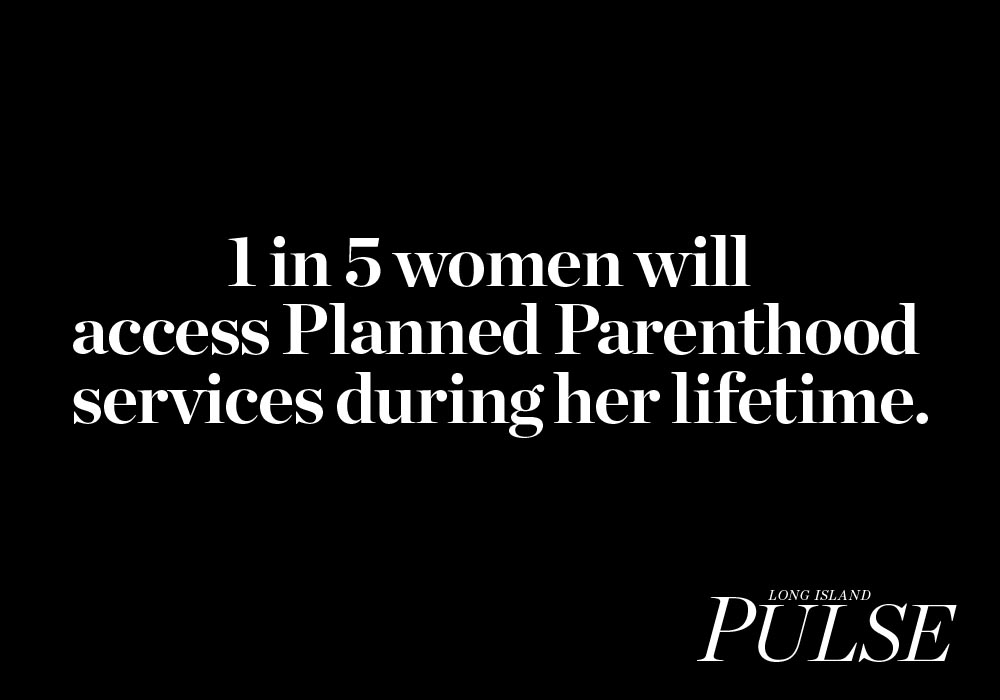 It’s numbers like these that have medical professionals like Dr. Jill Rabin, the chief of the division of obstetrics/gynecology at Long Island Jewish Medical Center, and a professor of obstetrics/gynecology at the Hofstra Northwell School of Medicine, skeptical that “Planned Parenthood patients will be able to go anywhere,” a claim often made by the opponents of the organization.

“We would do our best [to take on Planned Parenthood patients],” Rabin said. “I can’t give you a figure of how many we could take. That I cannot do. We can’t take care of everyone ourselves, but we would try to help them find care in other hospitals…it could cause overcrowding.”

And that’s where the stalemate begins. Though a 2016 Pew Research Poll showed 59 percent of US adults believe abortion should be legal in all or most cases—the highest rate it’s been in Pew’s two decades of the poll—only 27 percent of conservatives agree.

The first problem with centering the decision to federally defund Planned Parenthood based on its decision to provide abortions is this: Planned Parenthood doesn’t use federal funding for abortions. We all know the 1973 Roe v. Wade decision made abortions legal. Lesser known, and more important to this debate, is The Hyde Amendment of 1977, which prohibits the use of federal funds for abortions except in the cases of rape, incest or a threat to the life of a mother.

That did not stop Senator Ted Cruz from saying in a Sept. 2015 presidential debate, “we shouldn’t be spending $500 million of taxpayer money to funding an ongoing criminal enterprise.” Or Mike Pence from promising to “defund abortion providers” at the Right to Life March in January 2017.

It comes down to a question of economic curtailment. Not treating an STD/STI quickly can lead to pelvic inflammatory disease and the spread of infections, which would further tax the healthcare system.

And contraceptive access mitigates the financial impact of unplanned pregnancies, whether terminated or kept. A 2000 study by the National Business Group on Health found that health plans that do not provide contraceptive coverage wind up costing employers 15 to 17 percent more. The study accounted for both the direct medical costs of pregnancy and indirect ones, such as time away for family leave.

Employers aren’t the only ones who save when women have access to reproductive care. Taxpayers and the very government that voted to defund Planned Parenthood also benefit from its services. In 2011, a Guttmacher Institute study showed nearly two-thirds of unintended pregnancies are publicly funded through Medicaid and other government programs. Those pregnancies cost taxpayers an estimated $11.1 billion per year.

There’s also the education Planned Parenthood provides. Research published in the Journal of Adolescent Health in 2008 showed teens ages 15-19 who receive comprehensive sex education, which covers abstinence, consent and contraceptives, were 50 percent less likely to become pregnant than those who received abstinence-only instruction. Planned Parenthood of Nassau County, Inc. does about 15-19 workshops per week that follow an evidenced-based New York State curriculum. The program reminds people abstinence is the only way to prevent pregnancy 100 percent and educates them on contraceptive methods, STD and STI prevention and treatment. It also focuses on the definition of consent and how alcohol and drugs play a role in poor sexual decision-making.

It appears to be working. The New York State Department of Health has found pregnancies have dropped from 29 to 15 per 1,000 females ages 15-19.

“Defunding Planned Parenthood would mean we’d have to cut back on the number of students we’d be able to see,” said Zoee Davidson, a bilingual sexuality educator for Planned Parenthood of Nassau County, Inc. She pointed out that less education could cause a rise in unintended pregnancies. 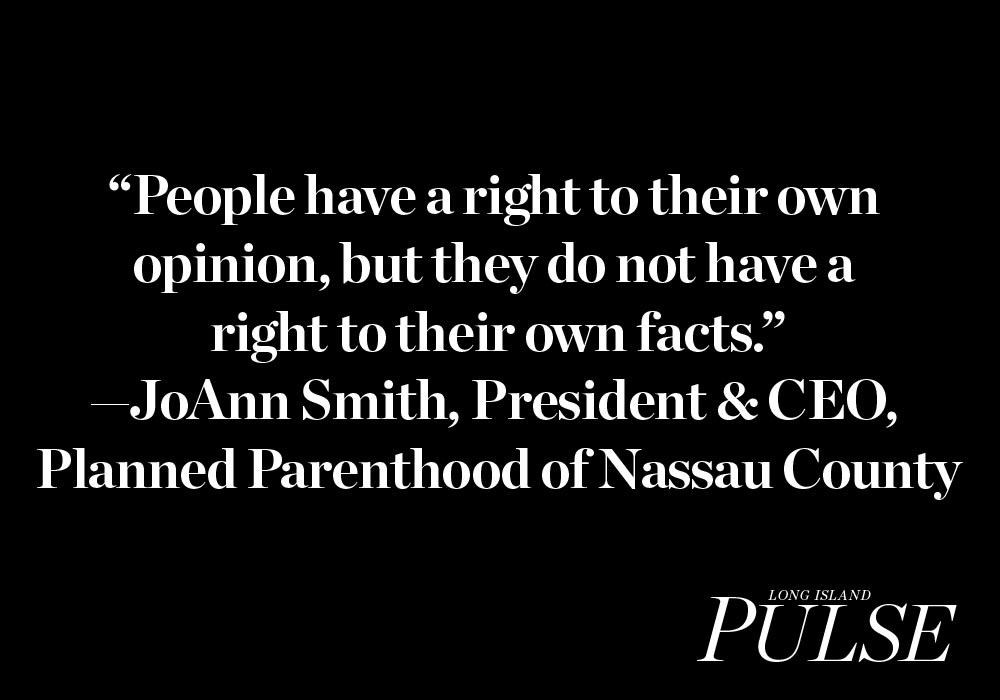 And that leads to another problem with centering arguments for defunding Planned Parenthood around its decision to provide abortions. Statistically speaking, the agency’s primary programs focus on decreasing unintended pregnancies. By defunding those services, the rate of unintended pregnancies will increase and with it, the number of abortions. A decrease in unintended pregnancies leads to a decrease in abortions. Nationwide, the abortion rate stands at 14.6 per 1,000 women ages 15 to 44 years old. That is the lowest since 1973, the year of Roe vs. Wade. “I would almost say we could take full credit for it,” Smith said. And she may not be far off. Planned Parenthood is the largest provider of contraceptives in the country.

“[I want to tell] people who are against abortions, we’re all on the same page,” said Lori Gershman, who has been a physician’s assistant at Planned Parenthood for about 17 years. In her role, she provides education and consultation to patients on sexual health. “I’m trying to prevent unplanned pregnancies just as hard as anybody else.”

But the debate over whether or not to defund Planned Parenthood goes beyond abortion, dollars and cents, although that’s what politicians often want to focus on. For some women, being able to receive care at Planned Parenthood is a matter of life and death. In 2011, Texas cut funding for Planned Parenthood and other women’s health problems by 66 percent, forcing 82 percent of family planning clinics to close—a third of which were Planned Parenthood affiliates. In 2012, 148 women died from complications of pregnancy and childbirth, compared to 72 in 2010. That’s an increase of averse impact of more than 200 percent in two years. Health officials warned against pegging the increase in fatalities on the decrease in funding for women’s clinics but offered no other reasons why it may have happened.

“I anticipate what happened in Texas is going to happen nationwide. We are going to see women die,” Schmidt said.

And with them our nation’s most pro-life public health agency.

Lee Zeldin and Peter King, two pro-life politicians on Long Island, did not respond to e-mails or phone calls requesting an interview.

Planned Parenthood’s federal funding has long been a subject of national debate. Tomorrow, a private OB-GYN will enter the fray. See what the loss of Planned Parenthood would mean for her practice, patients and potentially future patients on lipulse.com.