Disco music infiltrates the room as beaded, floral, and trendy outfits cover mannequins lined up against three walls. Instantly the small room upstairs at the Nassau County Museum of Art seems a whole lot bigger. A trip down memory lane with Halston and the Studio 54 room is hard not to marvel at.

The celebrity nightclub’s heyday was just about two years, but what a time it was. Black and white photographs, including one of the American designer with pal Elizabeth Taylor at her birthday party, hang on the wall, documenting a lively time when an inner circle with the likes of Liza Minnelli and Bianca Jagger was at the height of its popularity.

Yet walking through the rest of Halston Style, the latest exhibit at the Roslyn museum running through July 9, it’s evident Halston’s influence extended far beyond the exclusive nightclub. Eight rooms showcase the glamour and creativity of Halston, a man from humble beginnings who helped give American fashion prestige.

“He really brought American fashion to the world stage,” said Frowick. “He was one of the first American designers to do that.”

Born in Des Moines in 1932, Roy Halston Frowick caught the creativity bug at a young age. His niece said he was constantly making hats for his mother, aunts, and even neighbors. His talent took him to Chicago in 1952 where he attended the Chicago Art Institute. Shortly after, he opened a hat store earning himself a reputation.

The first comprehensive retrospective of Halston’s historic archive opens today at the Nassau County Museum of Art in Roslyn Harbor, NY. The exhibit will be open through July 9th!

“He knew what the ladies wanted,” Frowick said.

And the ladies wanted him. Years before Halston launched his salon Halston Limited at East 68th Street and Madison Avenue in 1969, he caught the eye of famous milliner Lilly Daché. She brought him from Chicago to New York City. In 1958, he was offered a job at Bergdorf Goodman. Halston’s influence became clear when he designed a pillbox hat for First Lady Jackie Kennedy to wear to husband John F. Kennedy’s inauguration in 1961.

A similar pillbox hat appears in a downstairs room of the exhibit along with other Halston hats, all vastly different. There’s a straw one in the shape and color of a strawberry and a monkey fur pillbox hat designed to look like a 60s hairdo.

Leave that room and enter a hallway showcasing Halston fragrances, jewelry (in collaboration with designer Elsa Peretti), and cosmetics. It leads to a bigger room with vibrant clothing made of materials he was known for—ultrasuede and cashmere. Envision a yellow robe-inspired dress that could be worn to a fancy cocktail party, a lavender ultra suede wrap dress, and a turquoise cashmere pajama with a matching cape. They all emphasize his desire for comfort.

“It was the simplicity of pulling things from your wardrobe and turning it into a silhouette that everybody could relate to,” said Frowick, who worked for her beloved uncle for several years. “That’s what his deal was, wanting to make high fashion really comfortable.” 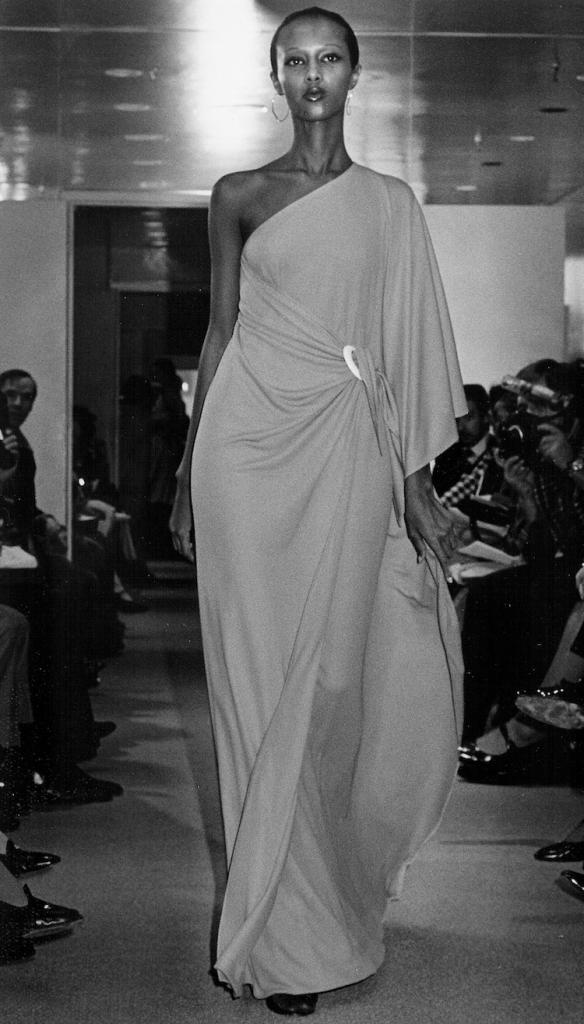 Supermodel Iman walks the runway in a Halston jersey dress in spring 1976.

But step into the adjacent room and soak in Halston’s fine taste with open back fancy gowns made with eye-catching fabrics. Or take another peek at the upstairs Studio 54 room and get lost in his creativity. There’s a midnight blue pajama piece with swirls and sparkles inspired by Vincent van Gogh’s “Starry Night,” a firework dress emphasizing his patriotism, and a Naeem Khan collaboration influenced by a geographic map.

The rest of the rooms showcase other highlights of Halston’s career, including designing uniforms for major corporations (Girl Scouts, Avis and now defunct Braniff), collaborating with good friend Andy Warhol, and dressing famous women like Lauren Bacall. Halston, who passed away in 1990 after battling AIDS, famously said, “You are only as good as the people you dress.”

A deeper understanding of Halston’s personality is explored with some of his original sketches, a glimpse into his modern New York home (known as 101), as well as his seaside estate near Montauk where he loved to get away.

“I want people to have a thorough knowledge of Halston and his work from beginning to end and understand what a genius he really was; what a hard worker he was,” Frowick said. “These things just don’t happen overnight.”

Another element that shouldn’t go unnoticed is how, even decades later, nearly every piece can still be worn today. As Halston once said, “Get something that’s classic.”