Decades after sprouting out of the streets of Toronto, Barenaked Ladies continues to sway to the beat of its own drum. This time longtime Brooklyn a cappella group The Persuasions, which hit the scene in the 1960s, joins in on the fun.

Both groups are set to release the collaborative album Ladies And Gentlemen: Barenaked Ladies And The Persuasions on April 14. The album, recorded live at Noble Street Studios in Toronto, features a new take on popular Barenaked Ladies tracks—of course the No. 1 hit “One Week” is included.

“I’m excited that we can finally release this record out into the world and share it with people,” band member Kevin Hearn said while phoning in from his home in Toronto.

Hearn spoke more about the unique collaboration and Barenaked Ladies’ upcoming 15th album before the group brings some magic to Long Island with a show at the Paramount on April 25.

Long Island Pulse: You had befriended the Persuasions at the Lou Reed memorial. Were you always a fan of their music?
Kevin Hearn: I’ve always been a fan of a cappella music, certainly The Persuasions were a group I was aware of. But the record that really got me into them was their 2000 record Frankly A cappella where they did all music by Frank Zappa a cappella.

How did the decision to work together come about?
It’s a bit of a long story but I’ll try to give you bit of the Reader’s Digest version [laughs]. I was Lou Reed’s touring band leader from 2007 to when he passed in 2013. Lou loved The Persuasions and he had them open some of his shows in the 70s. At Lou’s memorial in 2013, I was asked to perform and The Persuasions were also there performing. That’s where I first met them. I reached out to them after that and asked if they’d like to collaborate on something. We did a little project of my own together. That led to them coming to join Barenaked Ladies in Central Park during our summer tour (in 2016) and we all got along so well that we decided that we’d like to do more. They came up to Toronto and we went to the studio.

You mentioned working with Lou Reed for a while. What was that like?
It was an absolute honor. We became friends which is something I cherish and it was not an easy gig but it was very rewarding and I know I’ll never experience anything like that again. He was one-of-a-kind.

Why wasn’t it easy?
Because Lou was very demanding of his musicians and every night you were playing as if your life depended on it [laughs]. But it was exhilarating. You’d feel this exhaustion afterwards that was just the best. You know what I mean? It was a good feeling.

What was it like working with The Persuasions?
It was really fun and really inspiring. I always like working with people that are older than you cause you can learn a lot. And we just had a great time, not only recording, but just sitting at a table, having lunch with them, hearing their stories from the past and sharing our stories with them. It was just nice to connect on a human level. And another thing I’m very proud of is that we’re going to be going into the United States and we are a group of people that are different colors and different backgrounds and we are going to be creating a joyous sound together in harmony. That’s something I’m really excited about.

What’s something that you learned from The Persuasions?
Well I know when we recorded, I learned to play a little less to leave room for the vocals. That’s always a good exercise to be aware of who is singing what and where you need to play and where you don’t need to play. 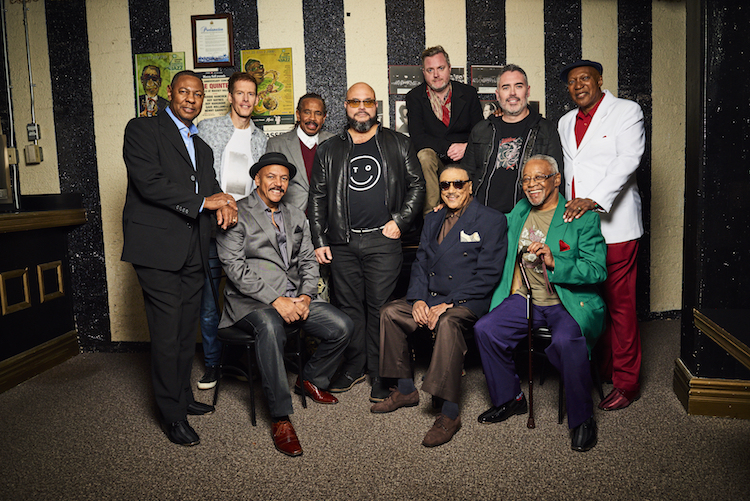 The Barenaked Ladies have also been around a long time now. How is like playing together now as opposed to the early days?
When you play with the same people for 25 years you get to know each other so well not just personally but creatively that you almost don’t even have to look at each other on stage. You know what the other person is going to play or where they tend to go. And so in our shows we improvise a lot and I think we’ve really become better at it. We make up silly songs every show and we each kind of know what our strengths are and what we can bring to that moment.

What can fans expect from this upcoming tour?
We are doing some shows with The Persuasions…so if they like the record, they should be there because we are going to be performing a lot of it…It’s going to be joyous, special and a rare occasion.

You also have another album expected this fall.
Yes, we’ve been in the studio—and it’s under the working title of Fake Nudes [laughs].

Where did that title come from?
Well, you know how everyone is talking about “Fake News” right? It’s just a play on words. Also our career people have said, “Well, you’re called Barenaked Ladies, but you’re just a bunch of dudes and you’re all dressed up.” So I guess we are in a way fake nudes.

It’s a pretty funny title.
Thank you. The record isn’t funny though, that’s the thing. It’s a pretty cool record. I think we really have come up with something a bit different and I’m excited to release that eventually, too.

How would you say that it’s different from your previous work?
Gosh, you’re asking tough questions [laughs]. Um, let’s see. Well, I think I’ve co-written three songs with Ed [Robertson] on this record which is a first. And I think instrumentally it’s just a little more adventurous and a little more experimental.