Great restaurants don’t just happen. They are the result of vision, hard work, enthusiasm and dedication. Stresa, in Manhasset, is and has been one of Long Island’s great restaurants for 25 years. That’s because Giorgio Meriggi and his unassuming co-owner Tony D’Arcangelo are all out, do-whatever-needs-to-be-done and a little more, owners.

Mr. Meriggi has paid his dues on his way up, as a bus boy, waiter, captain, chef, manager and finally owner. His career started in his native Italy in Cortina d’Ampezzo at the Palace Cristallo and Hotel Della Poste. From there he went to Paris, Vittel, Switzerland, Italy again, London, Brussels and Manhattan.

He saw service at some renowned eating places, including Fouquet’s in Paris, the Palace Hotel in San Moritz, Quo Vadis in London and New York as well as Le Cirque. He also owned Long Island spots like Navona, Stresa East, Tulipano and La Rondinella in the City.

And just like that Mr. Meriggi became the Mr. Personality of Long Island restaurateurs. He exhibits genuine sincerity in welcoming guests. He keeps an eagle eye on the tables and the well-trained waitstaff. Most of all he exudes an infectious, positive upbeat presence in the dining room. 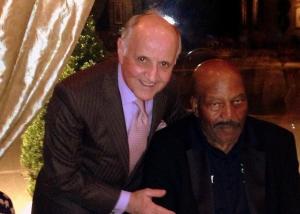 At 72 years of age he leaves his house every morning at 7am and heads for Stresa where he prepares all the day’s desserts. After that he goes back home to dress, returning to preside over the serving of lunch. After a brief afternoon interlude he is present for the dinner period that sometimes extends until midnight and beyond.

More than the long hours, Mr. Meriggi and his co-owner go the extra mile to please Stresa’s diners. When Alan King, the comedian and a regular at Stresa, was in the hospital with a serious illness that led to his death, Mr. Meriggi brought him his dinner every night. Mr. King liked a glass of wine with his evening meal but the hospital had rules about bringing alcoholic beverages onto its premises. The resourceful Meriggi got a Coca Cola bottle and filled it with the forbidden red wine.