Not many people remember what they were doing on Christmas Day 2009, but for Dave and Brad Jordan, it’s a holiday they will never forget.

As the father and son duo sampled a four pack of ales from Williams Brothers Brewing in Scotland, Brad became mesmerized by the elderberry ebulum black ale. His father, Dave, a longtime homebrewer saw his son’s excitement and nonchalantly said, “We can make this.” Brad was a little bit skeptical, but was eager to test it out. Within six months, the father-son duo had successfully cloned the brew and it scored above 30 at B.E.E.R.’s Annual Homebrew Competition.

In April, the Jordan’s will throw open the doors to the brand-new tasting room and brewery in Holbrook. Between three other craft breweries within a half mile of their location, Holbrook is quickly becoming the “go to” spot for breweries to set up shop.

In between their day jobs and preparing for their Grand Opening, Brad and Dave spared a few minutes to chat about their tasting room, growing their own hops and what kind of beers will be on tap.

What’s the story behind the name: Squarehead Brewing Company? I understand it’s slang?
Ha, yes! We didn’t want the brewery to be named after a town or anything too specific. One day we were tossing around ideas and my father yelled out, “Squarehead.” I really liked the sound of it. We’re Swedish, so once I found out that it’s slang in Nordic countries for the shape of one’s forehead, I thought it was just a great name. It’s used overseas in a joking manner and we have had people reach out to us of Scandinavian and Norwegian descent to say that they love our name too. 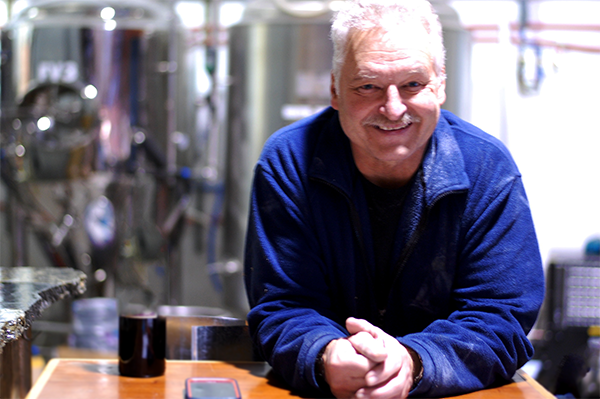 How would you describe the tasting room?
I would say it’s rustic industrial with a lot of repurposed iron and wood planks. The space is about 800 square feet and we have 20 taps with room for more. We will also be using blichmann beer guns that are retrofitted in for growler fills. Down the road, we would love to open the tasting room to the adjacent hops field where people can relax and congregate under ambient lighting. We also have the option to create a second story to the tasting room if we want to.

How would you describe your beer?
All our beers will be slightly seasonal in nature. We like to use what’s readily available during the peak seasons of harvesting local fruits, herbs, spices, honey varieties and hops. Depending on the style, they range from light to full bodied. Our ales will be distinct in that we are using proprietary yeast strains that are kept and built up in our propagation tanks.

What brews will be on tap when you open this spring?
Hippies On The Yip, a Belgian blossom saison with hibiscus, chamomile, rose hips, orange peel; Talking Stranger, an IPA with centennial cascade chinook simcoe (dry-hopped); Enough To Wake The Seven Sleepers, a hoppy pale ale brewed with light caramel, citra and jarrylo hops with mango; 3 dollar bill, a limited-edition small batch (2BBL) pistachio pale ale with roasted pistachios; Suite Solitude, a cream ale derived from a recipe that my father used to brew with my Grandfather; and, Nice Shirt, an Imperial stout with Maui yellow caturra bean that I roast in-house at the brewery and cold steep for 28 hours.

What will be on tap come summer?
In addition to those, we’ll also have The Occasional Pause, an amber ale with cinnamon and habanero and The Other Same Time, a black ale with black tea, vanilla, coconut and rooibos. We’ll also introduce a new beer, Juicy Connection, a pineapple IPA, freshly squeezed and added into secondary fermentation that’s perfect for warmer weather.

What type of flight would you set up for someone who has never had your beer before?
I would want them to get a solid understanding of the different types of beer we brew. I would have them try some of the lower ABV ones along with a few mildly spiced and/or hopped ones. This way, they can determine what they like and create a second flight that suits their personal palate perfectly. Unless someone really knows what they like, sampling new beer is always a gradual experience.

Where do you get your hops from?
We have been growing our own hops for almost a decade now. Our field is right next door to our brewery, which is more than convenient. When it comes to growing hops, it just takes time after you plant your rhizomes and lots of TLC. We’re a farm brewery, which means we also source hops and ingredients from local Long Island farms as well as ones in Upstate NY.