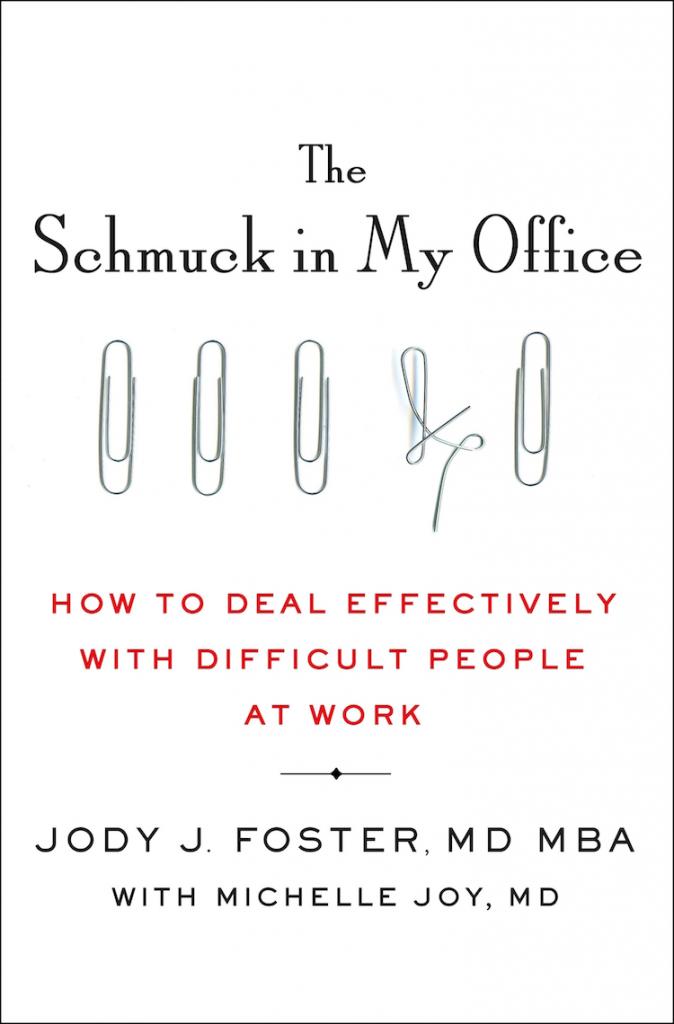 Your co-worker is an idiot.

All day long, he’s blah-blah-blah, telling you how great he is, the coolest guy ever. If you’ve done something, he’s done it better. Twice. You’d love it if the boss fired the jerk, but then you’d be short-handed and that’s no good, either. So read “The Schmuck in My Office” by Jody J. Foster, MD MBA (with Michelle Joy, MD) and find out a better way of dealing with him.

When she was in business school, Foster, a psychiatrist, was often amused and pleased to be a go-to person when conflicts arose. Classmates constantly asked for help in dealing with others who rankled them, and she was usually successful in smoothing ruffled feathers and feelings. So what are her secrets?

First of all, she says, don’t assume that people are being jerks on purpose. Most folks act one way or another when they think they’re doing the right thing, or because they haven’t been told any differently. Oftentimes, they don’t know they’re bugging someone with their behavior, so Foster advocates compassion when dealing with conflicts. Consider the other person’s story and way of thinking. It helps to step into their shoes.

Then, and though Foster very strongly stresses that this book is not a psychiatry manual and that you shouldn’t make armchair diagnoses, understand that there are several basic kinds of office schmucks you might encounter in your worklife.

Narcissists—up to 75 percent of which are men—thrive on compliments and hate being ignored. The “Venus Flytrap” loves chaotic and unstable relationships (think: Fatal Attraction). The Swindler only cares about the deal, and only if it benefits himself. “The Bean Counter” is obsessive and has difficulty letting things go, while Distracted people let go too easily. And then there are those with serious substance abuse problems, undiagnosed illnesses, true cultural differences, or just plain eccentricities.

Finally, says Foster, when you’re angry and digging for any possible reason to lend a shred of compassion, don’t forget to look inside.

And then go back and read the chapter entitled “Important Disclaimers.” As you’re reading “The Schmuck in My Office,” you can’t keep them in mind enough.

That’s because using real psychiatric diagnoses to battle an office pest can be fraught with danger, and the authors are careful to repeatedly warn readers of this. Yes, the possibilities are undeniably interesting and can explain so much, and it’s the rare person who hasn’t smugly rattled off a layman’s diagnosis for an office bother. But remembering that, “There is an important distinction between personality traits… and personality disorders,” is the key to using this book. It helps that the authors also offer end-of-chapter hints for both workers and bosses, too.

Though it’s not a handbook, this is fascinating. It may even teach you some compassion, so it’s recommended for anyone who works with others, shares an office, or is a supervisor. “The Schmuck in My Office” may get you fired… up.