IT’S HARD TO tell if Georgia O’Keeffe is better known for her gorgeously painted modern abstractions of skulls and flowers, mountains and bridges, and gentle arcs of light and color, or for her meticulously curated self-image. Georgia O’Keeffe: Living Modern doesn’t make that distinction any easier. In the first exhibition of its kind, the Brooklyn Museum presents a sweeping look at the life and work of the iconic painter. What comes through in gallery after gallery of color saturated canvases, stark, black-and-white photographs and the artist’s clothing (that is at once feminine, masculine and androgynous), is a brilliant painter, a fearless modernist and a confident woman who sought validation from absolutely nobody.

The genesis of the exhibition, organized by noted art historian Wanda M. Corn along with Brooklyn Museum curator Lisa Small, was the discovery of a trove of clothing in O’Keeffe’s home. Flipping through O’Keeffe’s closets, Corn found the sense of a woman who, even in high school, “is already announcing herself as having independence, a sense of security about her dress,” Corn said. 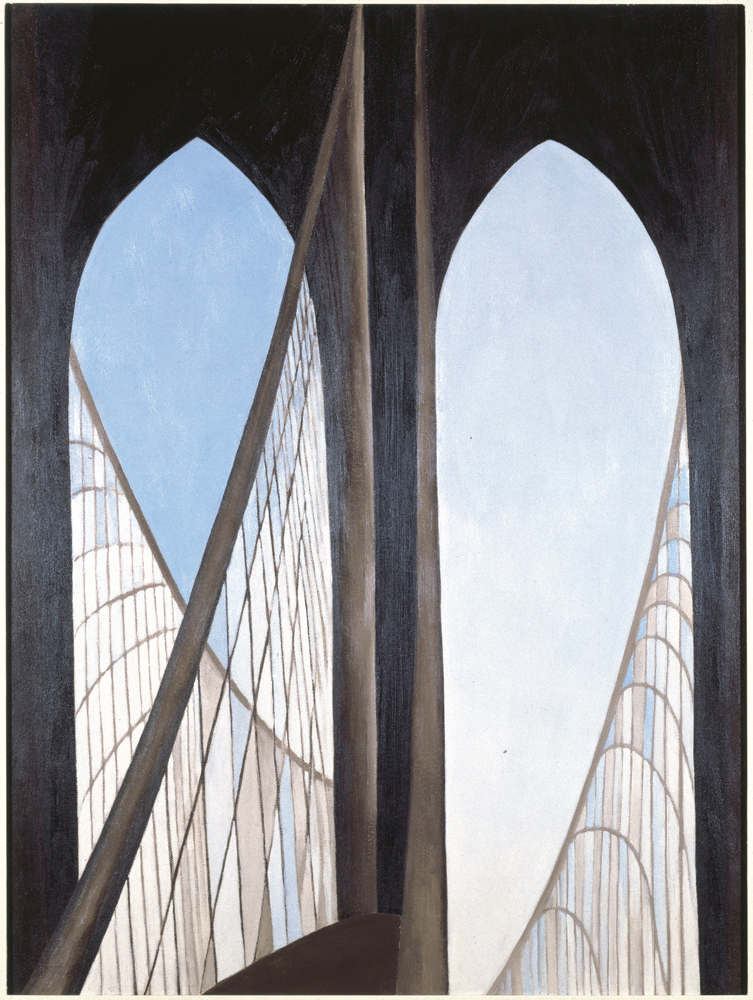 O’Keeffe favored black and white dresses, never wore makeup, did not fluff or curl her hair, chose flat shoes and eschewed jewelry. Yet she became famous for her beauty. That’s in part because it wasn’t just any art dealer that discovered her work in 1916, it was Alfred Stieglitz, the most famous photographer of his day. They fell in love, had an affair, later married and lived and worked together, on and off, for three decades.

“Stieglitz persuaded her to stop teaching… and come to New York in 1918 to be a full-time painter,” Corn explained. “He helped launch her career so that she would become the best known early 20th century female artist. But also she was someone that he could use in front of his own camera. For 20 years he photographed her…So he’s the person that really started the idea of her presence in the art scene being not only that of a painter, but that of a person with a very distinctive face and a sartorial style that was perfect.” 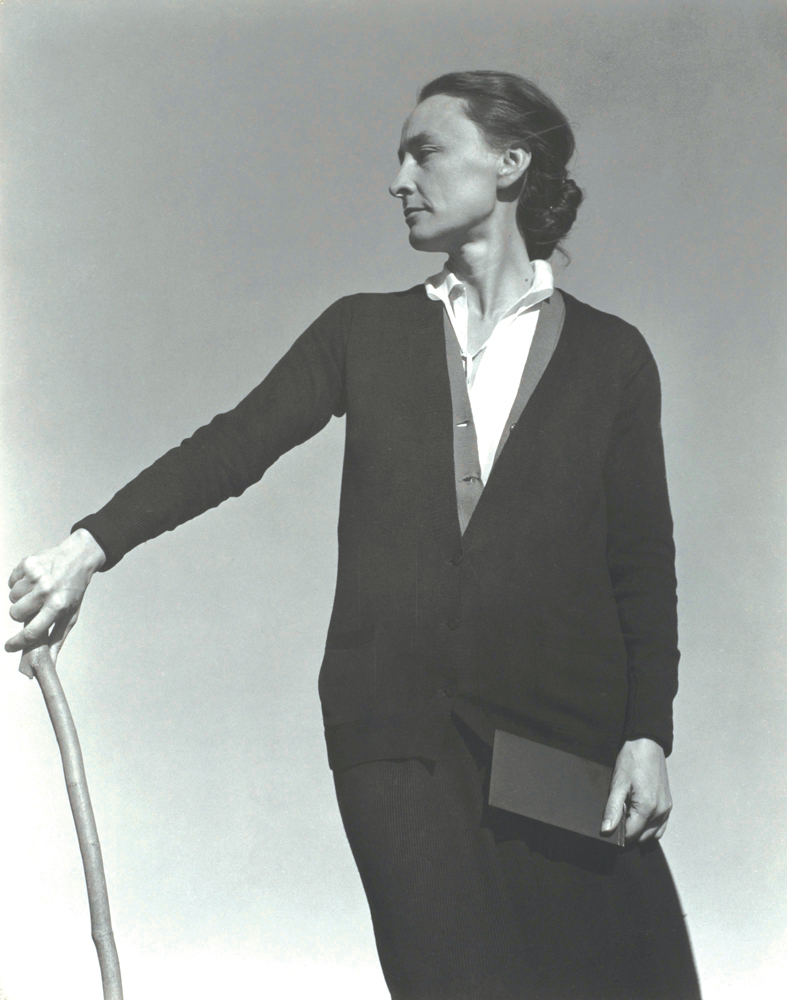 The exhibition combines O’Keeffe’s paintings with her garments—and they speak to each other in surprising ways. A group of dresses O’Keeffe sewed in the 1920s are soft ecru, silk and billowing, but are at the same time straight and modern. Corn has placed them in front of a group of sparse, linear abstractions in muted grays and white. “Line and Curve” with a seam running down it, could be a close-up of one of the dresses.

Five sections cover distinct periods: Beginnings (1887–1917), New York (1920s–40s), New Mexico (1930s–86), Asian Influences and Celebrity (1970s–86). In the New York section, there’s an abundance of silk and black-and-white in both art and attire. “There’s a beautiful painting of the Brooklyn Bridge. It’s the last painting she did in New York,” Corn noted. Next to it is the towering painting “Manhattan.” Its sharp, angular lines call across the room to a black silk evening coat whose lining is dyed the same pinks, grays and sky blue that highlight the painting. 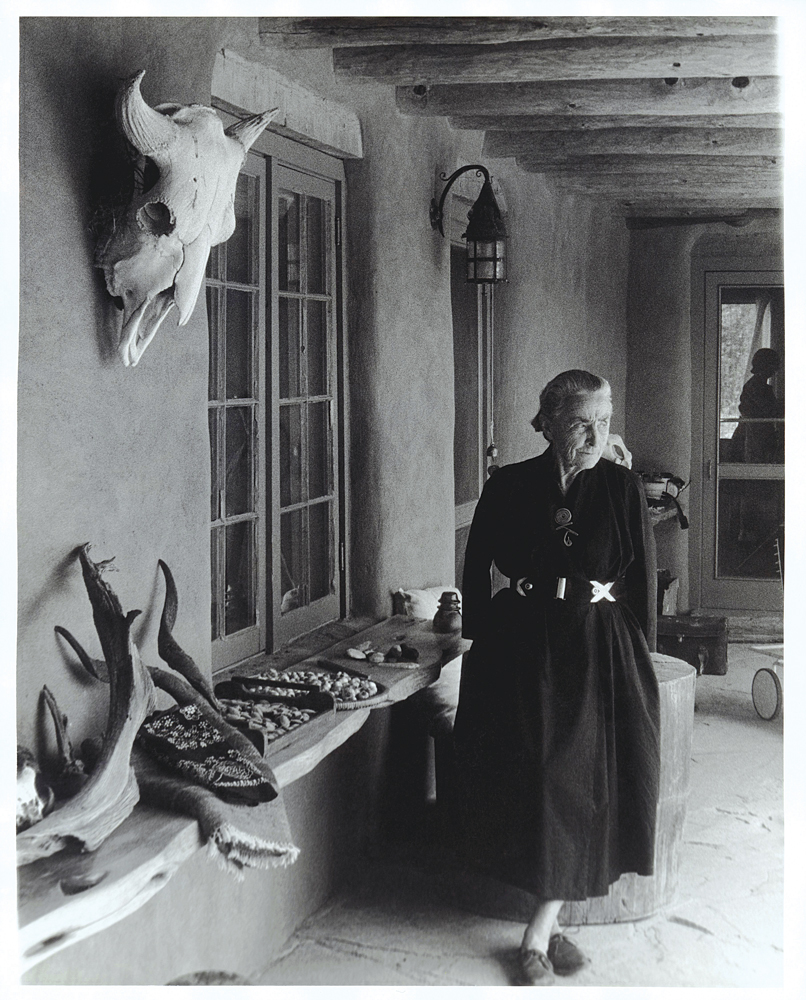 When O’Keeffe moved to New Mexico, her palette changed and she redefined herself in denim and silver, bandannas and an old cowboy hat, about which Corn said, “I was at first reluctant to show the hat because it was so beat up. But the more I looked at pictures, I thought, ‘Well, she didn’t have any problems with it so why should we?’”

The Asian Influences section pairs an elegant, fluid, Zen-inspired O’Keeffe sculpture with her collection of kimonos. And by the time she reached the celebrity state chronicled in the exhibition’s final galleries, she dressed like a star in Balenciaga and Ferragamo while posing for the likes of Andy Warhol, Ansel Adams and Annie Leibovitz. 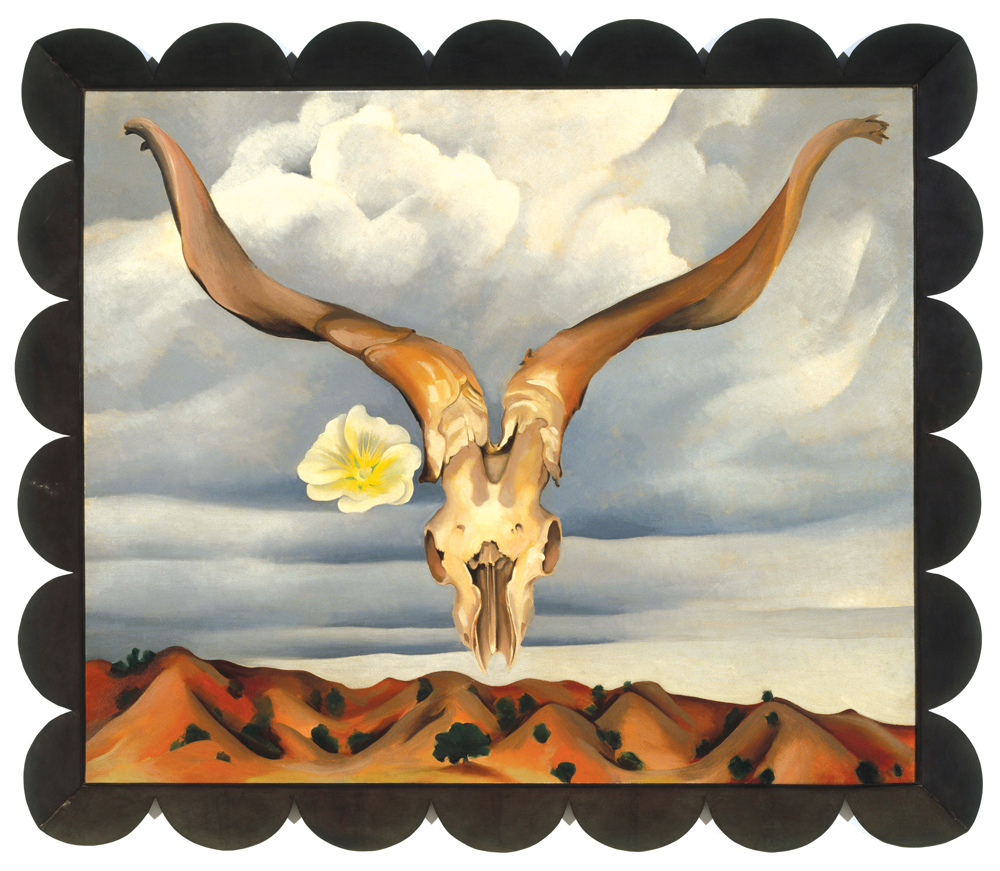 Her celebrity blossomed in the 1970s when O’Keeffe was in her 80s and 90s. She was embraced not just by the art world, but by hippies for her choice to live close to the land. And particularly by feminists, who saw O’Keeffe as one “who’d done it all and broken the glass ceiling,” Corn said.

Georgia O’Keeffe: Living Modern is part of A Year of Yes, the museum’s celebratory look at feminism in accord with the 10th anniversary of its Elizabeth A. Sackler Center for Feminist Art. Yet even in this regard, O’Keeffe refused to be defined. “She was an independent individual, and being forced into or being expected to take up the mantle of feminism did not interest her,” said Sackler Center curator Catherine Morris. But she added, “[O’Keeffe] doesn’t get to write that history. She is iconic. She has influence, at this point, for generations of artists and creative thinkers who were looking for a role model that she embodied. She is part of the feminist history whether it was part of her desire or not.” 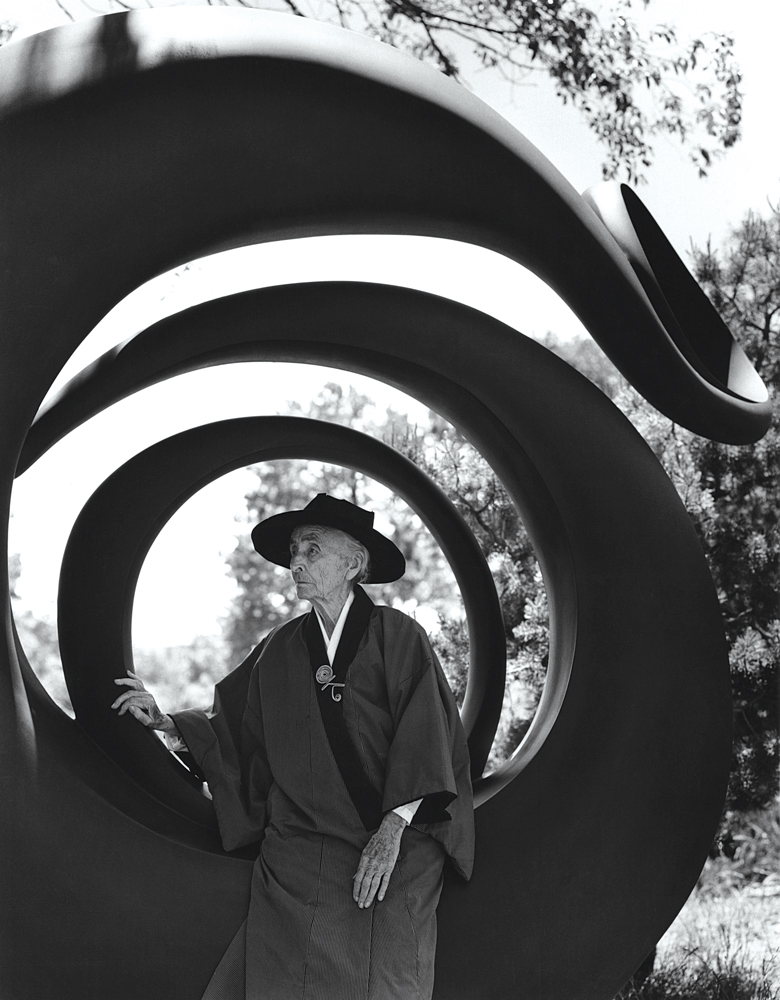 As carefully as she constructed her paintings and garments, O’Keeffe was deconstructing the conventional dichotomy of man and woman, yet remaining completely female. A striking woman whether young, lithe, full breasted and long necked; withered and wizened by the desert sun; unadorned to nun-like austerity; the picture of Zen simplicity or fabulous in designer clothes; O’Keeffe presented a carefully composed vision in her art and life.

In 36 stunning paintings, the groundbreaking artist shines through in her depictions of golden leaves, the delicate undersides of shells and the terracotta tones of the Southwest. In nearly 100 photographs, O’Keeffe appears almost sculptural, rendered into a non-person, or nonchalant and detached, thinking only of her art. Her clothing and sense of style join to complete the portrait.

“In the modern moment,” Corn explained, “it wasn’t just what went on the canvas, but what went into everyday existence…She curated her being.”