Mention the Azores and the response is often puzzled. “Hmm…sounds familiar but I can’t quite place the location.” There are reasons Portugal’s mid-Atlantic archipelago seems simultaneously familiar, yet foreign. Waves of immigration during the last three centuries have resulted in more Azoreans living in North America than their homeland. And, thanks to conservative tourism policies, trips in the opposite direction have historically been made only by the diaspora.

A well-kept secret and an Eden for outdoors enthusiasts, the Azores earned top rankings for sustainable tourism by the likes of National Geographic Traveler. This autonomous region, located roughly 1,000 miles from mainland Euro civilization, is close enough for a romantic getaway or adventurous long weekend, while also offering extended vacationers plenty of sights, such as a pineapple plantation, geysers and vast expanses of patchwork emerald fields.

The nine-island archipelago’s location dictates a temperate, not tropic climate. The scenery is reminiscent of Hawaii, Iceland and Ireland, and according to lore, the Azores are the legendary “Fortunate Isles,” a winterless earthly paradise inhabited by the heroes of Greek mythology. Given this moniker, it’s not surprising there is a long history of man living in harmony with nature.

Case in point is the enchanting village of Furnas on the main island of Sao Miguel. Set inland from the southeastern coast, Furnas is nestled in a valley that’s renowned for its verdant charm and geological activity. Among Furnas’ myriad of manifestations of the area’s volcanic origins are dozens of thermal mineral baths, each with different properties, and a mystical crater lake, Lagoa das Furnas. Just beyond the lake, a road leads to a belvedere. The vantage point provides a spectacular view of the village, which harkens to a Mediterranean-style Brigadoon with the red-tiled rooftops of its whitewashed stone buildings visible through the mist. 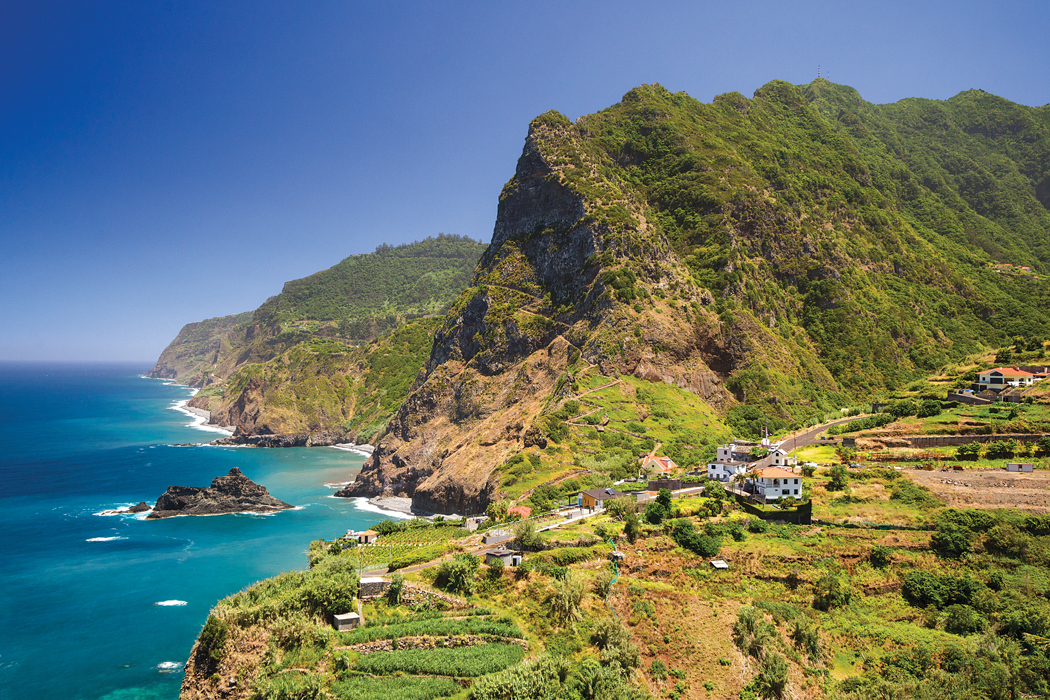 Sao Miguel’s mountainous landscape dotted with craters and lagoons is the result of volcanic activity.

Further down the ribbon of road is a lunar landscape where muddy holes in the scorched earth belch plumes of smoke and scores of men with hoes tend anthill-shaped mounds. At 12:30pm pairs of the men tunnel through the piles of dirt to extract huge covered metal pots buried below. Each duo carries off their bounty to a cheering crowd. The scene seems like an unlikely setting for preparation of a cultural and gastronomic treat but no visit to Furnas is complete without savoring a lunch of Cozido das Furnas, a traditional Azores stew cooked underground for eight hours over volcanic heat. Minutes from these subterranean ovens, the elegant dining room of Terra Nostra Garden Hotel provides a refined atmosphere to enjoy the earthy local dish of pork, beef, cabbage, kale, potatoes, carrots, chicken and chouriço sausage.

After a leisurely lunch, I take a long stroll through the adjacent botanical park. Bostonian and American consul Thomas Hickling who built his home, Yankee Hall, alongside a thermal spring founded Terra Nostra Gardens in the 18th century. Today, bathers enjoy the warm waters of the expanded pool that is the park’s frontispiece. The garden’s magical 30 acres teem with indigenous plant life as well as thousands of exotic plant species from across the world, woven together with serpentine water canals, mysterious grottoes and a whimsical lily pond. 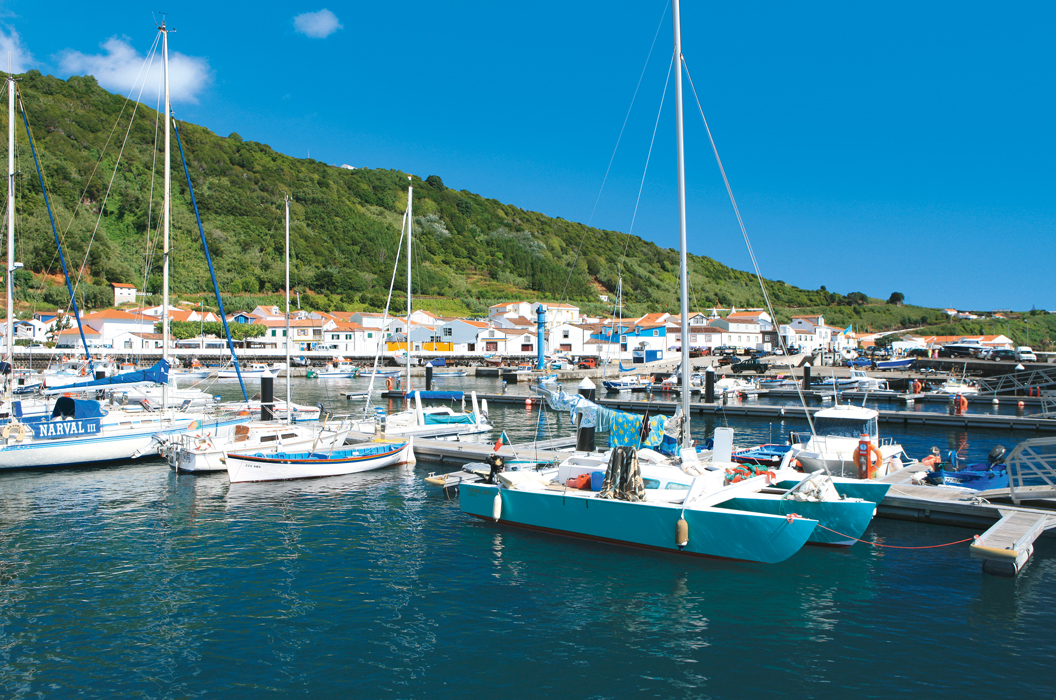 Pochinho Bay is home to a diverse community of sea life, including whales.

The whole of Sao Miguel can be likened to one big nature conservatory. At a mere 40 miles long and 10 miles wide, the island is small enough that its sights are within easy reach of the capital of Ponta Delgada, a modern city on the southern coast. Hotel Marina Atlantico, a gleaming glass landmark, is located across from the harbor promenade rest point. A short walk away historic sights abound, such as the charming Campo do São Francisco Square, the Church of Sao Jose and the 16th century Forte de São Brás.

Lagoa das Sete Cidades, or Lagoon of the Seven Cities, is one of Sao Miguel’s many geomorphic gems. It’s a 45-minute drive east from Ponta Delgada through rolling hills of idyllic pastures seamed by rows of brilliant blue hydrangea bushes. I let out a gasp as I crested a hill and caught sight of adjoining lakes at the bottom of the crater below, one a brilliant jade, the other a translucent azure. A trail runs along the crater’s perimeter for those seeking a 360-degree perspective; hiking the circumference takes about three hours. In the opposite direction from Ponta Delgada is Caldeira Velha, a secluded thermal pool beneath a cascading waterfall, reached by a path through a deep forest of cedar and laurel. Amidst prehistoric-looking vegetation, a handful of bathers lounged in steaming waters made rust-colored by iron-rich minerals. 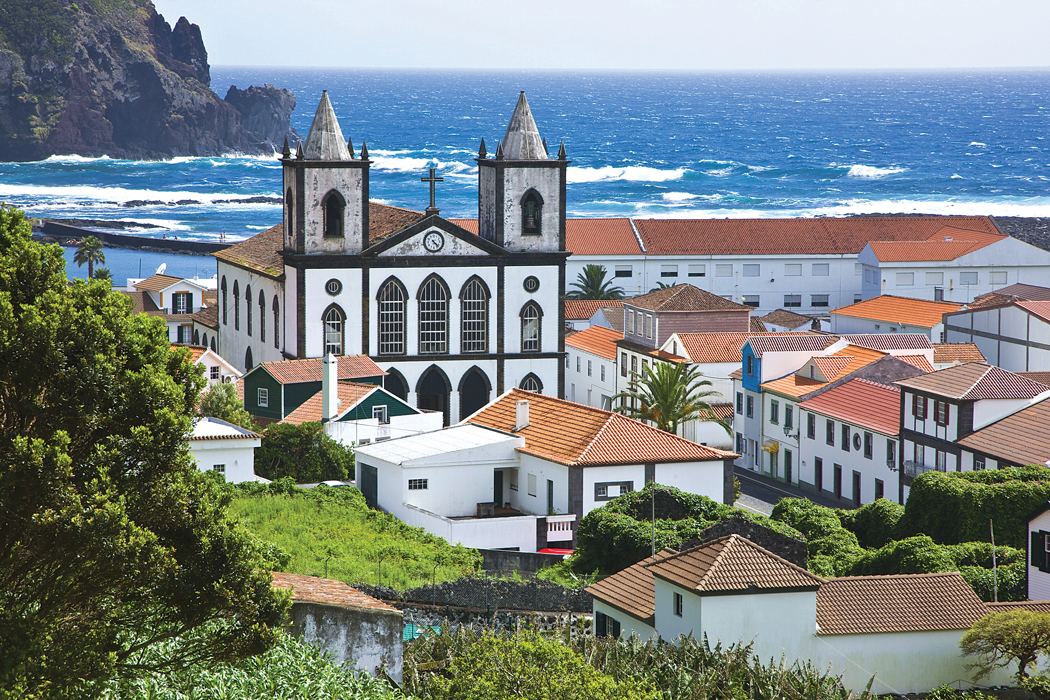 The town of Lajes on Pico is known for its Spanish-style architecture.

To the west of Sao Miguel, the island Pico is named for the enormous volcanic cone in its center, which dominates the skyline. The fertility of the black earth here was cultivated to grow grapes centuries ago—the viticulture proved so distinctive that Pico’s vineyards were designated by UNESCO as a World Heritage Site in 2004. Ensconced between a swath of luxuriant vineyards and the aquamarine surf of a dramatic shoreline is guesthouse Pocinho Bay, the labor of love of two former sociology professors from Lisbon. This exclusive sanctuary of six suites opened 12 years ago after extensive renovation of the former winery’s seven basalt structures, each exquisitely decorated with exotic art from the proprietors’ own travels to locales ranging from Guatemala to Malaysia.

Once an epicenter of the whaling industry, Pico is now a base for eco-tours that hunt whales for communal rather than combative purposes. Espaço Talassa in the tiny village Lajes about 40 minutes west of Pocinho Bay offers excursions on 29-foot, Zodiac-style vessels—a far more intimate experience than the large vessels used for such excursions in the U.S. Be prepared for a wild ride. After receiving word from a spotter stationed high in the hills along the coast, our skipper made a beeline four or five miles out to sea at high speed. The bouncy ride was well worth it—eventually, the engines were cut and we drifted alongside a pod of more than a dozen female 50-foot sperm whales. For 20 minutes or so, we rocked in reverent silence, feeling privileged to be in the company of these peaceful giants.

Inspired to take a trip to this eco Eden? Currently, direct flights from the U.S. are available on SATA and depart from Boston. Smart money is there will soon be more planes lifting off from American soil destined for this patch of paradise. A consortium headed by Jet Blue founder David Neeleman recently acquired a 61 percent interest in TAP, a Portuguese-owned airline, which now offers service to the Azores from Lisbon.