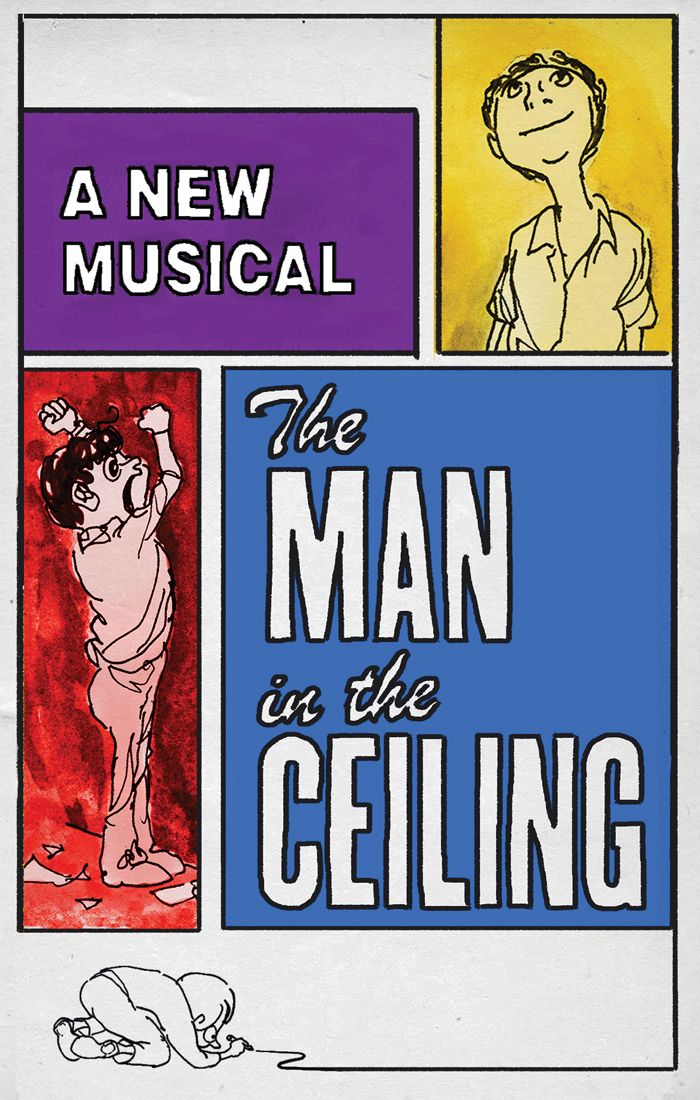 A YEAR AGO, when Sag Harbor’s Bay Street Theater held a staged reading of The Man in the Ceiling based on the 1995 Jules Feiffer children’s book, audiences were so taken with the musical that in post-show talkbacks they wondered aloud why Bay Street wasn’t doing a full-scale production. Fast forward to May 2017 when the show, co-created by composer Andrew Lippa and legendary cartoonist Feiffer, will officially premiere on Bay Street’s main stage.

Feiffer’s book tells the story of 12-year-old Jimmy, who dreams of being a cartoonist but faces apathy and even hostility when trying to follow that path. Asked if his own life paralleled Jimmy’s, Feiffer claimed, “It’s only autobiographical in terms of Jimmy’s emotions and sensibilities. Everything else is complete fiction. But his anxieties, doubts, the lack of support from his family—Jimmy is based on how I felt and behaved as a kid.” Turning a graphic book about a boy cartoonist into a musical isn’t all that far-fetched. A crucial character in Ceiling is Uncle Lester, who writes musical after musical until, finally, he gets one on Broadway. How his show fares there is less important than the self-confidence and persistence that allowed him to dream big in the first place—a lesson not lost on Jimmy.

The Pulitzer-winning cartoonist added that when he was Jimmy’s age he was already driven but didn’t know if he actually had talent. Decades of drawing panels for The Village Voice, not to mention penning Broadway plays (Little Murders, Knock Knock, Grown Ups) and movie scripts (Carnal Knowledge, Popeye, the Oscar-winning animated short Munro), have shown the 88-year-old Feiffer to be an American master. “Age doesn’t matter as long as there’s work I want to do and the work is play,” he explained. “It’s hard play—you make a lot of mistakes and screw-ups, but I’ve always loved it. Now that there are so many things I’m physically unable to do, my youth is entirely based on my ability to draw and write stories better than I did when I was 20, 30 or 40.”

Lippa, more than three decades younger than Feiffer, first came upon The Man in the Ceiling in 2000. “He was in the middle of finishing The Wild Party off Broadway at the time,” Feiffer noted. “He got interested in my book and invited me to see his show. I was expecting very little because that’s my attitude when I go to the theater! But I was blown away. Every aspect just floored me.”

It turned out that Lippa didn’t want Feiffer to co-write Ceiling. “He thought I was too old,” the cartoonist laughed. “I told him, ‘That may be true, but there won’t be a musical unless I write the book.’ So he reluctantly agreed.” The collaboration blossomed when Lippa realized Feiffer wasn’t afraid of revisions. “I know the violence you have to do to your own work. That’s part of the fun.”

Things got even better when Lippa’s childhood friend, director Jeffrey Seller—whose day job has included co-producing such musicals as Avenue Q and Hamilton—signed on. That led to a 2015 workshop at Palo Alto’s TheatreWorks which led to the Bay Street readings, which has led to the current world premiere. “From the beginning,” Feiffer said, “it’s been a joy.”