For some veteran heavy metal bands, it’s difficult to remain relevant years down the line. That’s not the case with Anthrax—the group’s 11th studio effort, 2016’s For All Kings, was the second-highest charting release of its career (peaking at No. 9 on the Billboard charts). The band members remain road warriors, as proven by their current US tour with fellow metallists, Killswitch Engage. Longtime Anthrax bassist Frank Bello spoke with Pulse about the group’s career, and what to expect when the “Killthrax Tour” rolls into the Paramount in Huntington on Cinco de Mayo.

Pulse: For All Kings came out over a year ago. What are your thoughts on the album now?
Frank Bello: It’s like looking at something that’s a labor of love. It’s something that I’m very, very proud of. Quite honestly, I guess as you get older in a band and time passes by, you’re really grateful for a band like Anthrax. We came up in the 80s from a scene that nobody knew about called thrash. To be here in 2017 and not only be relevant, but what a lot of people are calling one of the best records of 2016 is a really special thing for me… It’s very satisfying, and at the same time, makes you very hungry for whatever is next. We’re doing this great tour—headlining finally, thank God. We’ve been opening for everybody forever, and I’m one of the fans that say the same thing: “I love opening for people, but it’s time for headlining now. It’s time to really stand on our own and do our thing, and show people what we got.” We couldn’t be more excited right now.

What can fans expect at the upcoming show in Huntington with Killswitch Engage?
A lot of everything, quite honestly. It’s a full headline set. Not only is Killswitch Engage a great band, but we’ve known them forever… I think it’s a great package for people to come in and check out. In this market with what’s going on, I think it’s really good value. I always look at things as a fan. It’s like, “Wow. You get this package.” And that’s the way to do things now; you get a great package to see bands. It’s a great night out. It’s a great night of metal with two great crowds. I’m really looking forward to it. 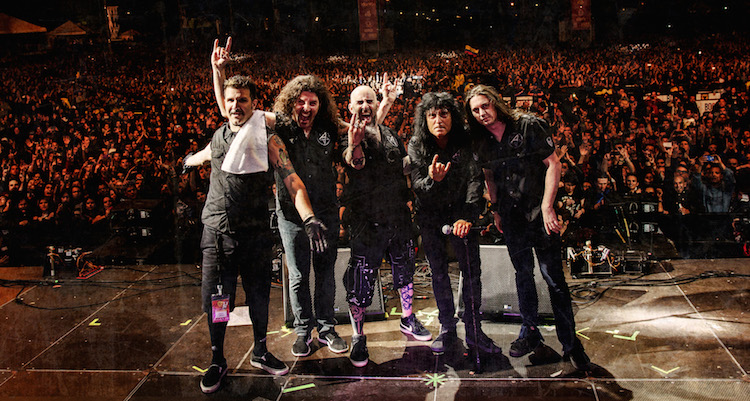 And last September was five years since the Big 4 [Metallica, Slayer, Megadeth and Anthrax] played Yankee Stadium.
No. 1, being a Yankee fan growing up 10 minutes from the stadium in the Bronx, it was the ultimate show ever for me. We’re very, very fortunate to even have this. Metallica is the biggest band in the world for a reason—because they rule. They were great enough to invite us on this journey with them to celebrate this thing called thrash metal, and these four bands coming up together through the ranks. I have to tip my hat to Metallica. That’s why they continue to be a great band and they don’t forget where they came from. I’m the first one to say it—I think all of us feel the same way—we would love nothing more than to do more Big 4 shows, because there are more Big 4 shows that people want to see. Believe me, I’d be first in line, because it was such a great experience… I think all the bands collectively would like to see that happen again.

Are you the only Anthrax member who is still a New York resident?
[Laughs] Actually, Joey [Belladonna] is from Upstate New York—he lives in Syracuse. But I live in Westchester. So, we are still New Yorkers. Scott [Ian] lives in LA, Charlie [Benante] lives in Chicago, Jon [Donais] lives in Rhode Island. I think you never really lose that New York vibe. To say the least, in your heart, you’ll always be a New Yorker.

It seems like, especially early on, Anthrax became synonymous with New York.
The one thing about Anthrax that I’ve always been proud of, and just as a person, I am who I am. I can’t pretend to be somebody else. That’s not the way I was built, that’s not the way my family brought me up. I’m very proud of just being me. There’s no pretense—who gives a shit about pretense? There’s enough of that going on in the world. I just want to be real. And that’s where our music comes from—a real place.