Legendary chef Jacques Pépin, notably one of the first to show off his cooking chops on a TV show, has received countless accolades throughout his distinguished career. That includes 16 James Beard Foundation Awards and France’s highest civilian honor, La Légion d’Honneur. At 81, the praise hasn’t slowed down.

The French native, who first worked at the historic Le Pavillon after moving to the United States in 1959, is continuously being honored for helping to transform the culinary world with his PBS cooking shows. (His 20-something cookbooks don’t hurt either!)

It only makes sense for PBS to showcase his story with the upcoming film American Masters: Jacques Pépin–The Art Of Craft (May 26). The film will have a few pre-screenings, including one at the Gold Coast Arts Center in Great Neck May 4 with Pépin in attendance. Beforehand, there will also be a tasting with over a dozen of his famous recipes prepared by James Beard award-winning Chef Michael Ginor.

Now residing in Connecticut with his wife, Pépin spoke to Pulse about his fruitful career, the evolution of his cooking and fond memories of East Hampton before the tasty event.

You started your career at a very young age. How did you know that you wanted to cook from so young?
I came from a family of restaurateurs. My mother had a restaurant in Lyon. In fact, there are 12 restaurants that I can count that my family has owned over the years.

When I was a kid from age like 5, 6, I’d go to the market with [my mom] and my brother and carry the stuff and help in the kitchen and clean the vegetables or whatever. I always did that. When I left home to go into formal apprenticeship, I was 13 years old but I had been in that business basically all my life.

So it was in your blood from the beginning.
At that time, it’s not like now. We didn’t have television, we didn’t even have telephones, we didn’t have radio…My father was a cabinet maker by trade and my mother was a cook by trade so I never thought that I could be a doctor or a lawyer; it was so far away from our world. I thought, “Either I am a cabinet maker or I am cook,” so that’s what I did. The choice was very easy for young people at the time, certainly easier than now…I’ve never regretted it. I’ve always loved it and had a good time with it and still do.

What’s your advice for young chefs today?
When I started out, the idea was to conform and you did what you were told to do. The cook, certainly at that time, was very, very low on the social scale. Any good mother would’ve wanted her child to marry a lawyer or a doctor, certainly not a cook. Well now we are genius—I don’t know what happened. Now, you see [chefs] on television; he is at the top of his game. It has changed a great deal. But I would tell a young person now going into that business, don’t go for that. Don’t go to quote become famous like Emeril Lagasse or Mario Batali because it’s very likely that it will never happen. But if you go for the right reasons, which is you love to cook, you love to please people, you love to feed people, then you will be happy and along the way maybe you will become famous, who knows, but even if you don’t you will still be happy. 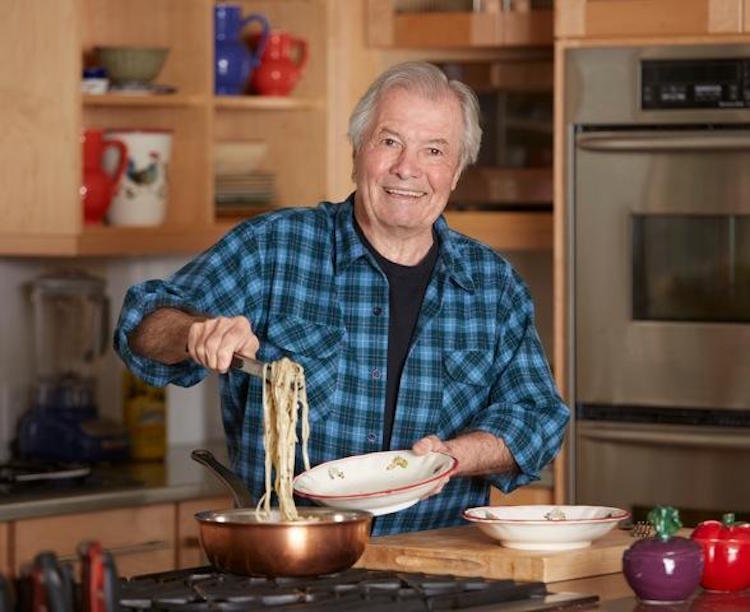 Like anything, you need to have that passion.
Yes, absolutely. If you really love what you’re doing, then you never have to go work.

And now there are so many different chefs and restaurants. Do you go out to eat a lot?
Not really, no. When I’m in New York I’m always lost. [Laughs] I don’t know where to go, there’s so many [restaurants].

I assume you do a lot of cooking at home then. Is there anything you love cooking more than other dishes?
I cook every day…When I was a young chef, I would put more and more and more on the plate. As you get older and older you put less and less and less on the plate. I am happy with relatively simple things…Last night, I did a chicken for my wife and me with some potato in it and some saffron. And we had a dandelion salad because I’m picking dandelion now; it’s the time of the year. And a piece of cheese. This is basically our menu.

What’s something that people would never see you cooking over the years?
Marshmallow probably. [Laughs] I’m not big on marshmallow. We don’t do that much dessert unless we have guests…We finish off our meal with a piece of cheese.

You’ll soon be coming to Long Island for this event. Do you come to Long Island often?
I used to…During my years at Howard Johnson’s for 10 years, from 1960 to 1970, I worked in Queens Village and I lived in Flushing and I used to spend a great deal of time in spring in East Hampton. My brother-in-law actually lives in Port Jefferson.

Anything you would love to do when you visited East Hampton?
Craig Claiborne who was the food editor of the New York Times lived there in spring and he invited me many, many weekends. We cooked for guests. In fact, that’s where my wedding was (at Craig Claiborne’s house) 51 years ago. I was cooking in the kitchen there for my wedding, maybe an hour before I got wedded. [Laughs]. I have a lot of very good memories of that time.