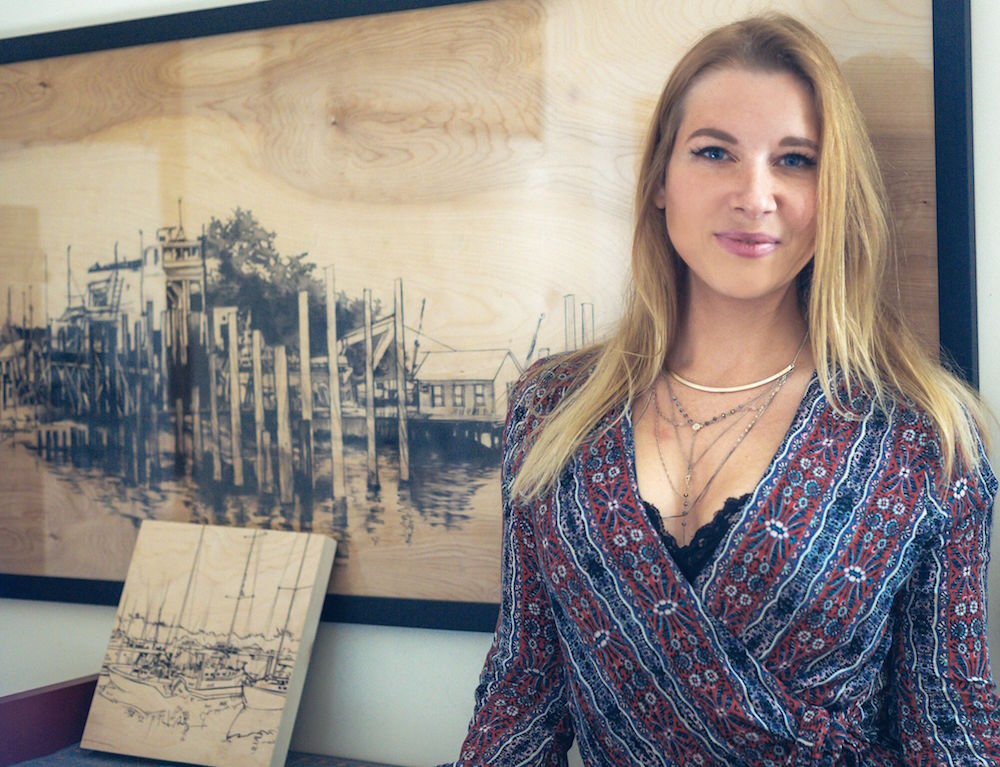 In a studio facing Greenport Harbor, a large desk is a transient home to pieces of birch wood and paper, each making their voyage from blank canvas to finished art. Walls are covered with encouraging letters and notes to the artist, and photos of loved ones remind her to stay focused and finish the work at hand. Shelves of art books are a given, with charcoal smudges on antique and handmade canisters holding the necessary creative tools in an inspired space. This is the studio of Kelly Franké.

Related Content: An Icon of Modernism at the Brooklyn Museum

Franké creates signature charcoal drawings that reflect architectural landscapes and structural renderings inspired by her surroundings. As a dual resident of Greenport and Astoria, her portfolio is a balanced representation of two very different places, each of which lend themselves to her next composition.

“It all starts with the location and subject matter,” explained Franké, as she visualizes the composition, aiming to have an interesting negative space. Next, she selects a piece of wood to match the composition. “Each piece of birch is unique, with its own distinct wood grain and coloration. The wood grain often alludes to water, or a stormy sky. It might be directional, like wind.”

Currently, she’s working on a Montauk Lighthouse piece that will have a giant swirl radiating from the light at the top. “It gives the drawing another element of dimension.”

A drawing of still boats in a small marina, a 24”x48” piece known as Greenport #9, and an intense rendering of the Queensboro Bridge, a work of the same size called 59th Street Bridge #3, are the artist’s two favorites. “They are complex, but not one bit overworked,” Franké said of these drawings.

Though she earned a Bachelors in Fine Art from Alfred University and a Masters from Indiana University, Franké’s inspiration to pursue an art career came at an even younger age thanks to another artist, her father Phil Franké. “As a child, I would sit under his drafting table and draw as he worked, trying to mimic the illustrations he created for advertisements and publications,” she said of the successful commercial artist and illustrator for magazines, books and advertisements. “He worked from home, so I had access to his studio every day. He taught me everything I know; any talent I have was inherited from him.”

Art’s profound meaning for Franké is something she hopes to offer clients in return, many of which commission custom pieces from her studio. “Art is special to own. Owning a Kelly Franké original is meant to bring happiness, beauty, or drama into a home or space,” the artist said. “Oftentimes commissions are gifts. How special is that?”

As with many in a creative field, Franké’s scope of work has reshaped to include the digital world, but not in a common way. Last year, the production team of a television series was looking for art to be used on set, and needed work fast. A crew member, who later became Franké’s silent partner, recommended some of her pieces. Several drawings were used, and Cleared Artists was born.

“Cleared Artists emerged organically,” she said. “After several sales, they asked him if I had more artist friends who would also sell their work.”

As an art licenser for the film industry, Franké established a digital database that represents more than 50 artists on popular productions including Fox’s Scream Queens and Showtime’s The Affair, and most recently, a new Marvel film. “I can’t say which, but now I definitely have to see it in the theatre when it’s out,” she laughed.

Cleared Artists is able to offer inventory immediately with brand new, fresh images that can be downloaded and printed in any size. This gives it an advantage over much of the industry’s current art database which is physical pieces filed away in warehouses. Cleared Artists’ genres include abstract, band posters, landscapes, kid’s art, photography and still life.

Franké continues to grow her personal studio practice with recently commissioned pieces, including the North Ferry out of Greenport and a structural drawing of local restaurant Lucharito’s, in addition to on-going gallery shows at Q.E.D. in Astoria and Castello di Borghese Vineyard and Winery in Cutchogue. Upcoming premieres for broadcast network pilots hold plenty of opportunities for Cleared Artists as well, bringing sure-to-be favorites into living rooms across the country.