Growing up in Montreal, Lisa Mozo had one passion: dance. After school, she went straight to dance class till 8pm, went home to sleep, woke up and did it all over again.

In college she was accepted into a dance program, but that’s the moment it all changed. Dance stopped being fun and became more of a stressor. Mozo decided to switch majors and eventually landed a job working in television. Yet during her free time, she tried various different dance classes, even yoga and pilates, to try and revive that feeling she had as a little girl.

“I was on a journey to find that same exhilaration and joy and freedom I felt growing up,” said Mozo, who lives in Great Neck with her husband, a Long Island native.

Mozo soon stumbled upon 82-year-old Esther Fairfax, the only daughter of the late Lotte Berk who is credited as the “queen bee of all the barre exercise methods.” Although Fairfax was no longer training people in her mother’s method by that time, she obliged after reading Mozo’s pleading letter. Mozo flew to meet Fairfax in London to get trained about a year ago, and became one of only three to bring Berk’s technique to America. “From the very first move, I [felt like I was] home,” she said.

In April, Mozo opened her own barre studio on the Roslyn waterfront appropriately naming it London Barre. The cozy studio is a black and white theme with only three mirrors hanging on the wall. They purposely aren’t full-length. 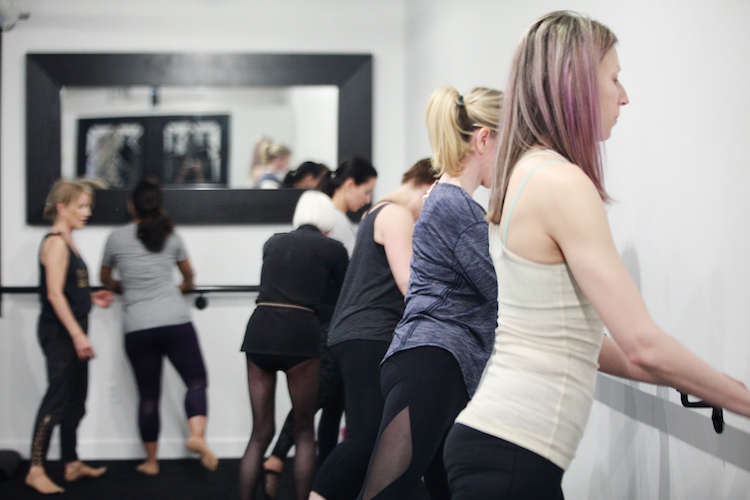 “I want people to be in tune with their own bodies and when I make an adjustment I want them to feel it, not just to look at themselves in the mirror,” said Mozo. “We tend to get lost in our own image sometimes, not necessarily that we are in love with it; it’s just being overly critical and to me that means you are removing yourself from the moment.”

Each class starts with the same choreographed warmup in the middle of the room. It’s designed to target the ligaments, joints and muscles without overtraining them. Then it’s off to the ballet barre against the wall where the real fun starts. Holding onto the barre, students participate in movements that work the body from head to toe. Some include moving the leg in a way that works the thighs. Others involve lying on the floor with toes tucked under the barre to work the core. Mozo also puts on music with a powerful beat, often hip hop, making the class more enjoyable.

“It’s easier to lift your leg when you’re lifting to the beat and your mind is connected to it,” said Mozo, who offers classes seven days a week.

Even though the technique is dance-inspired, being a professional is far from a requirement. In fact, Mozo’s classes are all purposely one level.

“You’re feeding off the instructor and the people next to you in a really nice environment,” she said. “It will kick your butt in all the right places but people walk away happy and they all say, ‘This was so much fun.’”