For Colin Quinn, who has been performing stand-up comedy since the mid-1980s, the past can explain the present. Unconstitutional, the comedian’s off-Broadway show about the creation of the United States Constitution is just one example. The Park Slope native’s bits, as well as his grouchy, skeptical and fast-talking persona on stage, also take note of his roots and upbringing as a New Yorker.

But Quinn’s New York attitude is not one of hyper-liberalism and political correctness. In fact, Quinn, who will perform at Sag Harbor’s Bay Street Theater Saturday, May 27, typically sends the latter down the drain. Case in point: His recent Netflix series, a one-man show, takes a revisionist approach to clearing up any confusion about the city’s long-standing history with immigrants. Called The New York Story, the special plays off of generations-old ethnic stereotypes. It pokes fun at everyone from Jews bringing over the “art of complaint” to Greek diner owners and their “rude-polite” attitude with customers. Longtime friend Jerry Seinfeld, who featured Quinn in the web series Comedians in Cars Getting Coffee served as director.

I caught up with the comedian before his show to get his take on sharing bits with fellow comedians, how audiences have changed over the years, and, of course, the influence of presidential administrations on comedy.

During a conversation with Jerry Seinfeld, you mentioned how it feels to receive approval from a fellow comedian. Who do you run material by?
I don’t run my jokes by other comics. None of us do. But if a comic says they love a particular joke, you feel proud. 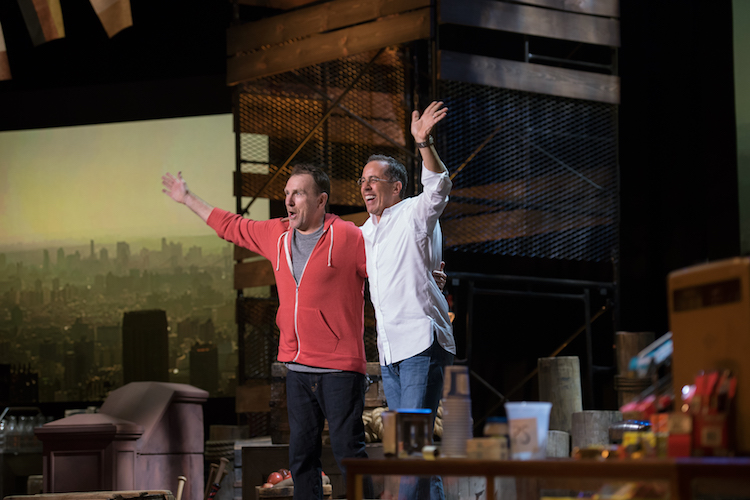 Many of your jokes are based on historical events. Why are you fascinated with the subject, and how far off from the truth do you believe your jokes are?
History is just an interesting way to talk about what’s going on now. I feel like every joke every comedian tells is perspective that makes it a joke…any comic can talk about going to the store but Steve Wright perspective is going to be different from Brian Regan. They will both have funny bits about the same place but it’ll be totally different ways of looking at those places because of their brain’s interpretation…And as far as history and truth, I feel every joke about history or not has to have some kind of elemental truth to it or it wouldn’t get laughs.

As a comedian, how often must you assess the political environment? How have audiences changed over the years in this respect?
The political environment is obviously crazy right now, and you can’t ignore it, but it’s more of a backdrop for humanity than the lead. Audiences have changed in that they will hear certain buzzwords now and tighten up immediately before they hear the joke itself. Buzzwords can be different things for different audiences and they change all the time. You can’t really adjust your act because you are writing from what you think is funny so adjusting it to a specific audience would be an exhausting and probably futile exercise.

Acting, writing or performing stand-up: Which do you enjoy the most? Do you believe it’s essential for comedians to excel in all three areas if they want to go pro?
I enjoy writing the most—and yes, I think, without writing, you can’t be a stand-up [comedian] that keeps coming up with new material. Acting is only good in that it keeps you “out there,” so you will have people coming to see you.

You’ve been doing stand-up comedy since the Reagan administration. As far as material is concerned, which administration has made your life easier as a comedian?
Obviously, Trump would seem to be the answer, but it’s also become saturated, so I don’t know. I feel like administrations are only a small part of what most of us tackle. They are good for a few laughs, but you have to make people laugh for an hour—and that means many aspects of life and many takes on those aspects.